Getting Wild on the Ice for Yellow Perch

To brave bitter ice-fishing conditions, it helps to be a little crazy 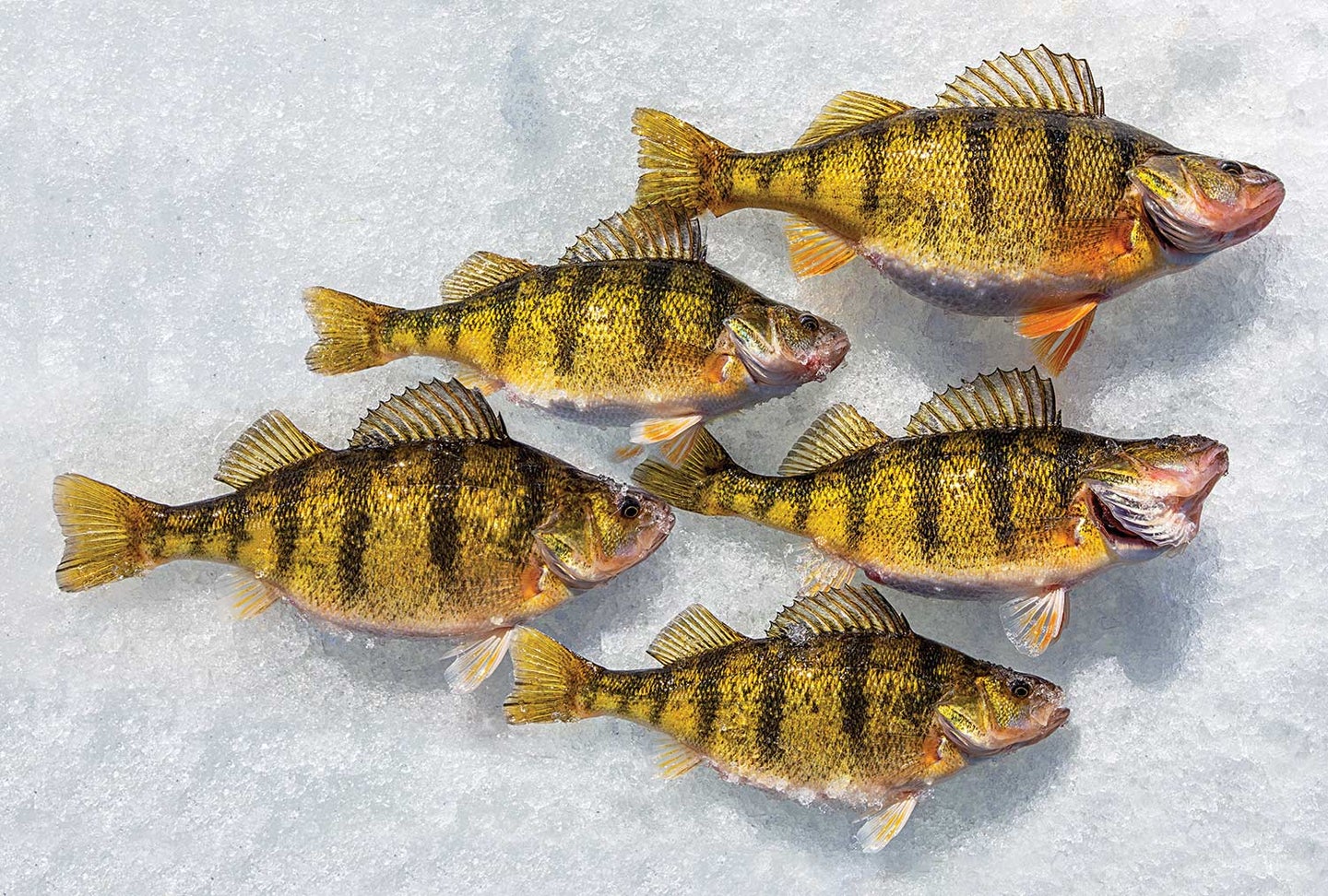 Frozen Fish: Yellow perch are lined up in the slush near a productive ice-fishing hole. Tom Martineau/The Raw Spirit
SHARE

It’s 5 a.m. and February in northern Vermont. Virtually all of New England is asleep and cozy in their houses, wisps of wood smoke slipping from their chimneys.

But not us. Norm and Marcel and I are in a dimly lit basement, in line with a bunch of other groggy and disheveled men, all of us clutching bait buckets. A guy in a T-shirt is standing behind a table with a minnow dipper in his hand and a money bucket in front of him. Behind him is a whiteboard listing the prices of the various sizes and kinds of live bait.

Norm whispers that we’re being gouged by the shiner prices. The guy ahead of us turns and says, “Yeah, but if the fish don’t bite, you can fry them up and still have dinner.” He winked, I think, but at 5 in the morning, who the hell knows?

We drill 30 holes through the foot and a half of Lake Champlain ice and set as many tip-ups, half in deep water for salmon and the rest in the shallows for pike. Two hours later, still no fish.

I leave Norm and Marcel and our field of traps, towing my plastic sled piled with an augur, a jig rod, and a bucket, and trudge out in search of perch. Four holes later, I catch one fish on a jig—and then one after another on jigs dressed with perch eyes. Each time it’s the same. The line goes slack when the jig hits bottom, three turns of the reel, a twitch of the rod, and then an electric peck and 30 seconds of fun on the spongy rod and 4-pound-test.

It’s the flakes melting in the hole that awaken me to the snow. I look around and see that a veil of white has been drawn across the Green Mountains and has wrapped its way around the Champlain Valley. I’m several hundred yards offshore, but it feels like miles. I snuggle deeper into my insulated jacket. The perch are here, and I’m not leaving.

Wild man, I think, remembering a line from Walden: “Early in the morning…men come with fishing reels and slender lunch, and let down their fine lines through the snowy field to take pickerel and perch; wild men, who instinctively follow other fashions…”

As quickly as I can recall the words, a red-faced mountain of a person in camo coveralls and a bushel-basket beard is standing next to me, as if summoned. Like he’d parted a snowy curtain and stepped onstage. “Getting a few,” he says, pointing his jig stick at the flopping pile of yellow and orange around my hole. He offers me a chew, which I decline, and some venison jerky, which I accept.

I ask him how the fishing has been. “We’re getting more white perch than yellow these days. I like yellow perch.”

“So do I,” I say. “Over on the coast, where I live, they only want white perch.” While we ponder this, it occurs to me that it’s exactly the sort conversation you have only with fellow ice fishermen.

I ask him how far out the ice is safe, and he explains that it’s all good. I tell him the story of an infamous day from years earlier when a large patch of ice broke off from the main sheet on southern Champlain and drifted into the open expanse of the broad lake. A helicopter plucked 21 ice fishermen from the dissolving cake. He nods and says, “Hmm.” Then he tells me that he spends every weekend day out on the ice, and that he likes talking to other ice fishermen and hearing about what’s going on.

“My brother and I were out here earlier,” he allows. “Can’t find my holes with the new snow and all.” He gazes around, turning slowly like a mechanical store display of down, hair, and wool. I look up to invite him to drill some new holes with my auger if he wants, but he has vanished into the whiteness.

Read Next: The 20 Best Ice-Fishing Lures Ever

By midafternoon, the perch bite has cooled, as has the day, with the wind shifting to the northwest and snow blowing across the ice. I tow my little sled back, with icy flakes pelting my face. You have to be a little crazy to be an ice fisherman, I decide—the sort that follows other fashions. Or maybe a little detached, like the floe that carried all those winter anglers across the lake 30 years ago. When I reach our home base, Norm and Marcel are standing by their own buckets of fish. They’re grinning. The three of us are frozen and happy. Officially detached.

We dismantle the traps, pack up, and joke about who will clean all the perch. Then we jump in the truck, and Marcel cranks up the heat. We’ve been wild men, if only for the day.

Fresh snow cover can make figuring out a winter lake like trying to read a closed book. Where do you set your tip-ups? One strategy is to drill holes in a perpendicular line out from the shore, spacing them 20 or so yards apart. Doing this allows you to cover a variety of contours, which cruising fish often follow. For large panfish, pike, and walleyes, start at a sounded depth of 5 feet or so and end at about 25 feet deep; for trout and salmon, start at 20 and end at 40 or 50 feet deep.