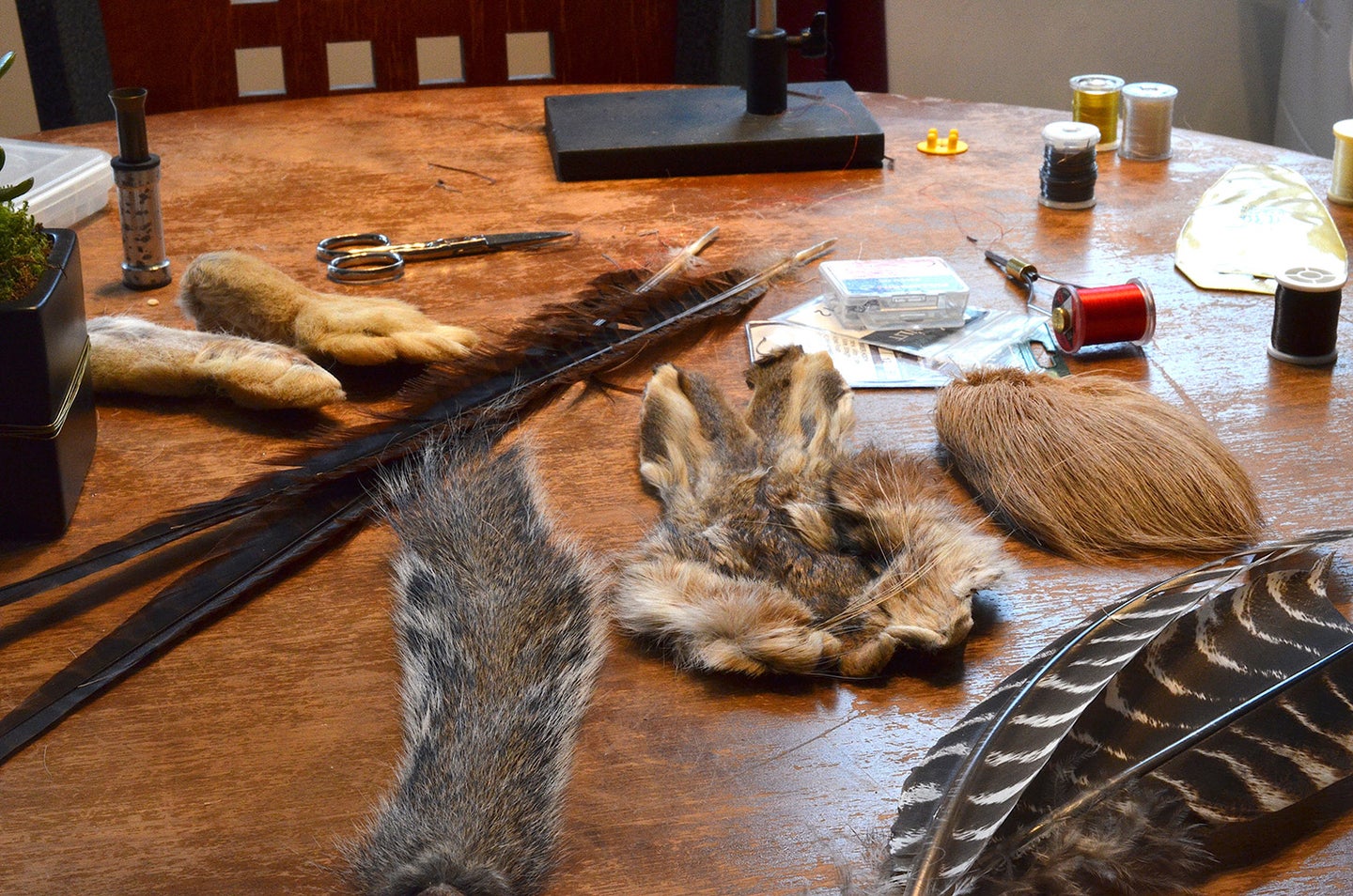 Materials gleaned from the woods are the source of many classic trout flies. Morgan Lyle
SHARE

A friend and fishing mentor in Utica, New York, used to say that if he saw a deer, rabbit, or fox while on his way to the stream, he would use a fly that had some of that animal in it. A rabbit, for example, might inspire him to fish a Gold-Ribbed Hare’s Ear. He called it omenology.

John was half-serious at best; he was usually quite strategic in his choice of fly. Still, I liked thinking there might be some kind of symbiosis between the wildlife in the woods and the trout in the streams. After all, many time-tested and beloved fly patterns rely on wild fur and feathers.

I guess it’s more likely that our fly-designing ancestors used feathers and fur they acquired when hunting because it was readily available (along with plumage and hair from domestic animals in the barnyard). But they must have enjoyed realizing that the grayish-brown fur on a hare’s face was the same color as a mayfly nymph, or that the finely banded barbs of Hungarian partridge breast feathers would make enticing, spidery fly legs.

Grouse, pheasant, woodcock, wood duck, goose, mallard, rabbit, deer, bear, moose, fox, opossum—all and more have contributed ingredients to fishing flies over the years. Saving the hides and skins for fly-tying is a nice example of using every part of the game you take. It can also give you more options in your tying. For example, I prefer to pluck from a full hare’s mask than to use prepackaged hare’s mask fur, because I can take advantage of its palette of brown, tan, gray, and almost-black.

Prepping the parts for storage in your tying room may require a bit of research, but if you already dress your own game, you probably won’t be intimidated. Even if you don’t hunt, you can easily buy these materials, and there’s something organic and cool about tying with them. Here’s a small assortment of proven patterns that rely on some of our trout’s wild dry-land neighbors.

The Deer Hair Emerger (DHE) is the fly I use for surface-feeding trout. I’ll tie on something else only when I see rock-solid evidence that it’s necessary. The DHE doesn’t lie horizontally on the water like most dry flies, but instead pokes its back end down through the surface, like a Klinkhamer Special. The man who popularized this style of fly, writer and artist Bob Wyatt, thinks the submerged abdomen makes it more visible and therefore effective. But this simple pattern’s other attributes can’t be denied. The buggy brown hare’s mask body, ribbed with the tying thread for segmentation, looks like the shuck of a nymph, and the sprig of deer hair seems to suggest the emerging fly’s wings and limbs.

The deer hair used here is from a blacktail deer and it’s sold as “coastal deer hair;” whitetail body hair is probably too thick. Calf tail is a pretty good substitute, and Wyatt uses snowshoe hare’s foot fur for the wing on the DHE in size 18 or smaller.

The brown, micro-fuzzy barbs of pheasant tail feathers make fantastic bodies for nymphs and wet flies. You could pretty much just wind some onto a hook and make a perfect blue-winged olive nymph, as Frank Sawyer did with his Pheasant Tail pattern. Americans gussied up Sawyer’s fly with a peacock herl thorax and various kinds of legs. Europeans modified Sawyer’s bug, too. They gave it a heavy, shiny bead and a hot spot of bright dubbing, and used it to score points in flyfishing tournaments. Lance Egan introduced this style of fly to American anglers, recreational as well as competitive, and somewhere along the line, it was named the Frenchie.

Egan’s Frenchie has a tail made of barbs from coq de Leon feathers. It looks great, but I’ve always liked the way pheasant tail barb tips imitated insect tails, so I use them instead. It works just fine. So whether you prefer the Sawyer Pheasant Tail, the American Pheasant Tail, or the Frenchie, and you hunt pheasants or know someone who does, save the tail feathers.

Upland birds are the source of what has come to be known as soft hackles—both as a material and a fly style. Grouse, pheasant, and Hungarian partridge breast feathers have barbs that wiggle and wave in the water, looking for all the world like the flailing limbs of a struggling insect. Nineteenth-century English and Scottish anglers developed the soft-hackle fly style: a slim body, a sparse feather collar from a game bird, and often nothing else. The Partridge and Yellow (and its siblings, Partridge and Green, and Partridge and Orange) are usually fished a few inches deep and are thought to suggest hatching mayflies or caddis. They can be great in those mystifying moments when trout are rising but won’t touch your dry flies. They’re also great general-purpose flies to try when there’s no more obvious choice.

Not much on the Muddler Minnow doesn’t come from the woods. It’s got a wing and tail from turkey quills; an underwing of gray squirrel tail hair; and a head and collar of deer body hair. Only the tinsel body isn’t covered by fish and game laws. It’s an ancestor to modern flies like the Sex Dungeon, and it catches fish the same ways newer flies do: a bit of flash, a bulky profile, and a tightly-packed head that pushes water and announces its presence. You can use them, small and large, for trout and bass. They’re usually swum underwater and do an especially good job imitating sculpins, but a Muddler can also be a great grasshopper fly, fished on the surface. Rub in some floatant, slam it near the bank, and with any luck, you’ll see a boil instead of a sip.

This unruly blob of a fly hatched in the Adirondacks decades ago and has been catching trout ever since. It’s made of nothing but hot orange thread and snowshoe hare’s foot—hair for the tail and the “wing,” if you can call it that, and underfur for the sparsely dubbed body. Whether the hot orange thread or the snowshoe hare is the part the fish like, I can’t say. It certainly doesn’t look like most mayflies or caddisflies. Nonetheless, it works very well. Because snowshoe hare fur is naturally waterproof, I don’t use any floatant on this fly, but I do squeeze it dry every few drifts.

The Bunny Leech is a great fly for big trout and other species, and the Pine Squirrel Leech is constructed the same way, except it’s made of strips of pine squirrel hide rather than domestic rabbit. The hair is much shorter. The leather is much thinner. It’s much easier to cast, and probably a better match to most of the forage fish in trout streams and bass ponds. Like rabbit fur, the soft fur of the pine squirrel moves in a most lifelike way in the water, which is probably the key to its success. The fact that it has enough bulk to “push water” and looks like a fish from below, as well as from the side, also probably helps.

Read Next: Fishing Knots: How to Tie the Six Strongest

We’ve mostly been talking about trout flies. But Jersey Shore fly guru Bob Popovics sometimes makes Bucktail Deceivers that are bigger than most of the trout I catch. The fly is a variation on the legendary Lefty’s Deceiver, but instead of having a bucktail body and a tail of rooster feathers, Bob’s fly is bucktail-only. Tying one is a bit of a project and involves a lot of messy trimming, but the result is a durable, three-dimensional fly that’s easy to cast and has great action in the water. It’s my favorite pattern for fishing Long Island beaches for striped bass and bluefish—on hook sizes 2 to 2/0, with a body and tail size ranging from 3 to 6 inches long. The best single color is white, but other colors and combinations of colors are great, too. They’re also excellent flies for large bass, northern pike, or musky, and I’ve tied them as small as size 6 for trout fishing. Pretty much any fish that eats smaller fish can be caught on the Bucktail Deceiver. Deer hunters, each tail is a fly box full of patterns. Use darker hair from the top side for the backs of your streamers and the white for the bellies. The hair also takes dye well, and from that point on, the possibilities are endless.