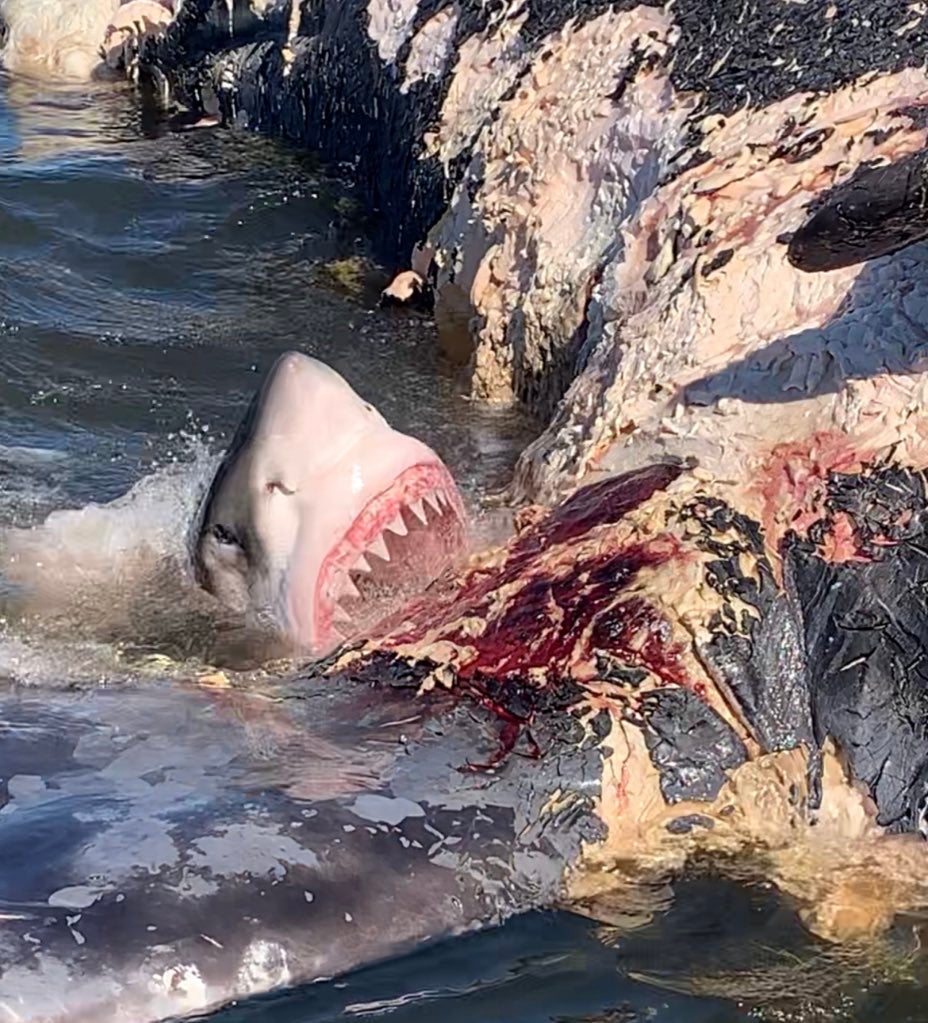 A great white tears into a whale carcass off the Carolina coast. Outcast Sport Fishing
SHARE

Nothing attracts a great white shark faster than a dead whale—but nothing prepared a South Carolina crew for this kind of feeding frenzy: More than half-dozen great whites, all feeding in the same spot.

A North Atlantic right whale, an endangered species, was found dead on February 27 after it became entangled in commercial fishing gear. An airplane crew spotted several sharks feeding on the whale carcass, and Captain Chip Michalove, the owner of Outcast Sport Fishing, based in Hilton Head, set out to investigate. The veteran captain planned to wait out a storm system and hopefully tag some sharks that would still be feeding on the whale for scientific research. Upon arrival he found a frenzied chaos, with several great whites feasting on the whale’s remains.

“I’ve never seen anything like it,” Michalove told For The Win Outdoors. Michalove, who has a permit to tag and release white sharks, said the sharks were circling our boat for eight hours. “They were biting the boat, pushing the boat, and biting the motors so much we had to pull the motors out of the water. I never felt nervous. There were just so many in the area that it was more interesting to observe than to catch.”

Michalove and his crew tagged two white sharks—a 12-footer and a 16-footer. He posted a video of his observations to his Instagram page. Michalove described the experience as “maybe one of the best days I’ve been alive today. So much work went into finding this whale, and the payoff was one I’ll never forget. From 9 a.m. till we left, it was one great white shark after another. Part of the time we hooked and tagged, other times we just watched.”

In the past decade, great white sharks have attracted a lot of attention along the Atlantic Coast. The apex predators spend the summer feeding on Horsehead and Harbor seals around Cape Cod, Massachusetts, and spend the winter further south, showing up in South Carolina in early winter.