So, You Want to Catch a Monster Alligator Gar? 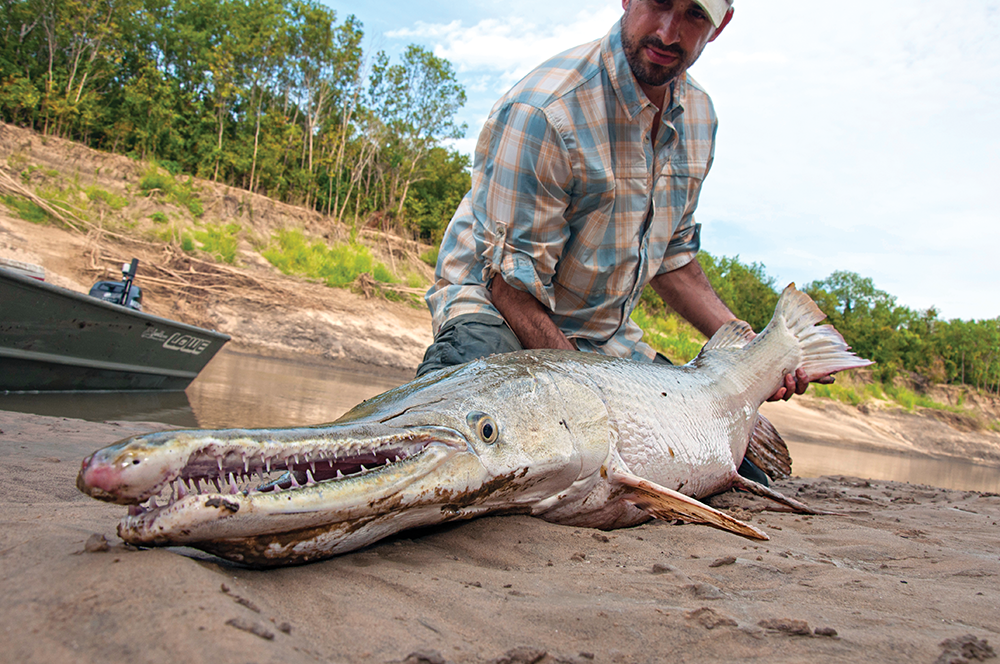 Last September, I got my own first taste of gator gars. As I watched a 10-inch slip float slice a V-wake down the center of a chocolate-colored pool on the Trinity River near Gun Barrel City, Texas, I understood Hefner’s fixation. With every foot of 130-pound Dacron line that peeled off the free-spooling reel, instinct told me to lock up and swing. I glanced at Hefner, who was guiding my buddy Mike Sudal and me. He was sitting at the back of his dirty johnboat, on a cooler slathered in dried carp guts, wearing a wide smirk. “Not yet,” he said. “Give him time to eat.”

Swimming away with the carp steak on the end of my line was one of the most misunderstood fish in the country. From alleged human attacks by giant alligator gars to accusations of decimating gamefish populations, gator gar have garnered their share of hatred—so much so that in the 1930s, the Texas Game and Fish Commission set out to eradicate them with a boat called the Electrical Gar Destroyer, which sent 200 volts into the water. Thank God the plan didn’t work, because from the second Hefner said, “O.K., hit him,” and I felt the strength of the gator, I knew these fish deserved respect—and that every angler should catch one in his or her lifetime.

Still not convinced? Before you dismiss the gator gar as a menace or a pest, consider the facts.

My first alligator gar—all 6 feet, 90-plus pounds of it—pulled like a semi truck. Now, as it tranquilly lay on the surface next to the boat, Hefner slipped a homemade snare over its head. But when he tightened the cable loop behind its pectoral fins, the gar went berserk, spinning and banging its hard snout against the gunwale. I couldn’t help but feel intimidated by the raw power of this armor-plated fish, not to mention its needle-sharp teeth. In reality, though, Hefner says gar aren’t as threatening as they appear.

Read Next: Fishing for Trophy Alligator Gar in Texas

“I still get clients who are afraid to put their hands in the water,” he told me. “Fact is, there has never been a verified gar attack on a human. The occasional bites that get reported turn out to be from actual alligators, not gar. These fish care only about eating what they can swallow, which is smaller forage.”

When Hefner heaved my fish into the boat, it hit the deck and started rolling. “This is when you can get hurt,” said Hefner, sidestepping the gar. “The fish isn’t going to bite you; it’s those front teeth that stick out of the mouth that get you. If he thrashes his head and hits your leg, you’re cut.” I looked down at my bare legs and feet, protected only by flip-flops, and jumped to the bow.

On our second morning, two reels began screaming within minutes of our having set the lines. But these were too fast to be gar takes, and we ended up boating a 30- and a 40-pound blue catfish. This made me wonder: If gator gar are as ravenous and destructive as anglers make them out to be, how could catfish survive long enough to reach these sizes in the Trinity?

“Gator gar have been around for 2 million years,” Hefner told me, “and they haven’t decimated any gamefish populations yet. But that doesn’t stop a lot of anglers from killing every gar they catch.” Moreover, he said, some fishermen wrongfully lump together all gar. “There are three species of gar, but folks will see a small spotted gar chasing bass fry in the shallows, and right away they think it’s a gator.”

As we motored from hole to hole, we saw limb lines strung everywhere. Their targets might have been catfish, but gar are common by-catch. In seven years of guiding, Hefner has caught gar with healed machete and ax hacks, and with caved-in skulls and jaws badly deformed by baseball bats.

According to Dan Bennett, a fisheries biologist with the Texas Parks and Wildlife Department, studies have proved that these gar pose no real threat to gamefish populations. “The majority of their diet consists of rough fish, like carp and shad,” Bennett said. “They’re opportunistic feeders, so they’re going to eat what swims within reach of the bottom. Bass are stationary, which means a gar would have to hunt them down. Most of the gar we sampled actually had empty stomachs.”

How Old Do the Biggest Alligator Gar Get?

You have to respect a fish that can grow longer than 7 feet in water where there’s not an inch of visibility, such as in the murky Trinity. Hefner explained how to age a catch. “A 1-year-old alligator gar will measure 18 to 24 inches,” he said. “They reach 5 feet in roughly 12 years, and then they hit a wall, growing only about 1⁄2 inch every year after that. So a 6-footer can be anywhere from 35 to 45 years old. Seven- and 8-footers can be older than 70.”

Do You Want to Learn How to Catch Alligator Garfish?

Hell yes you do. Consider this: Try for catfish long enough, and you might land one weighing 80 pounds—if you’re lucky. Aside from the freak jumbo blue cat, however, alligator gar and sturgeon are the only freshwater species in the U.S. to routinely break the 100-pound mark. If battling a fish that is pure muscle and makes you break a sweat can’t get you excited, then I don’t know what will.

On top of that, there’s the ease of catching gar. Pick any saltwater fish weighing more than 100 pounds, and you can bet that getting to where it lives and having the right equipment is going to be far more challenging than it is for catching a gator gar. If you’ve got a lawn chair, a rod and reel that handles muskies or big catfish, a chunk of cut bait, and a forked stick to wedge in the dirt, you’re in the gar game. Of course, if you want a greater advantage, such as access to low-pressure holes, you can hit up a guide, like Hefner, who’s based in the Dallas area.

Once you do land a monster gar, don’t feel as if you have to toss it back, either. “In Louisiana, people eat gar all the time,” Hefner said. “If you’re willing to take the time to clean one, they actually have very pretty white meat.”

What Fishing Tackle and Bait is Best for Catching Gator Gar?

To get a solid hookset on a big gar, you have to give it time to work the bait into the soft part of its throat. The downside is that for your safety, once you’ve landed the gar, you won’t want to try to retrieve your hook, even with very long pliers. To ensure safe releases, Hefner talked with local fisheries biologists, who helped him determine that bronze hooks and bronze wire were best when rigging for gar. Water and stomach acid will corrode bronze quickly, so gar can get rid of clipped rigs within a few weeks.

How Should You Fight a Giant Gator Gar?

The slow take of an alligator gar doesn’t speak to its fight. Since gar are used to chomping down on bones and scales, the hooks and wire in their mouths won’t bother them in the slightest. But once they’ve had time to chew and you finally lock the reel, wind down, and set, the real thrill begins.

As soon as the hooks grab, the gar will go ballistic. Bigger fish tend to make every effort to stay glued to the bottom. During this digging phase, pump and reel as you would when trying to pull a big fish out of an offshore wreck. Be aggressive, because if the gar can, it will run you into the closest brush or deadfall.

The next phase is aerial. Once that massive head breaks the surface, be ready for the fish to throw its entire body out of the water. Normally, a gar is close by the time it surfaces. If you can, click into free-spool during the jump to allow a hint of slack. This’ll help keep the hooks planted and prevent the fish from pulling the rod out of your hands.

Finally, remember that alligator gar can breathe air. So the fish lying calmly next to the boat isn’t done; it’s resting. Keep a tight grip on the rod and be ready for surprise bursts of energy.

In three days on the Trinity, we saw a number of boats bowfishing for gar. Though it’s easy to view bowfishermen as the bad guys, Hefner explains that arrows are the least of the gar’s concerns.

“Bowfishermen are going to disagree, but most guys on the Trinity go home empty-handed,” Hefner said. “Nothing about shooting a gator gar is easy.”

If there is any threat to the species, it’s dams, which have shrunk the fish’s range (once running as far north as Illinois) to Texas and Louisiana, primarily. To spawn successfully, alligator gar need access to flooded woods and fields, and though the East Texas floods of 2015 were catastrophic for the state’s residents, they improved the well-being of these underdog fish. “When the waters receded, I saw baby gar by the hundreds,” Hefner said. “The future gar population will be in great shape because of the floods.”

By the time those babies reach the 6-foot mark 35 to 45 years from now, Hefner and I will be old men, likely too weak to fight them anymore. But I’m sure that whoever hooks one will be just as awestruck by the force of those broomtails, by the history in every rock-hard scale, and by the resilience behind every fearsome tooth as I was the first time I saw a gator gar break the muddy surface of the Trinity.

Inhabiting waters throughout the lower Mississippi River basin and along the coastal plain of the Gulf of Mexico, the monstrous, long-lived (to 75 years) alligator gar (Lepisosteus spatula) has been variously reviled and revered by freshwater anglers throughout history. Dismissed by some as a gamefish-devouring, muddy-water-dwelling trash species, the alligator gar is nonetheless heralded by a growing number of devotees as a premier sport fish—hard fighting, mean, and (in growing to 8 feet and 300 pounds) just about the biggest thing you’re apt to encounter in inland waters.

A trophy gator gar has a savage collection of teeth, which it uses to grab and manipulate prey as it feeds. A double row of teeth on the upper bill distinguishes the alligator gar from other members of the genus.

The alligator gar’s hard scales fit together like the tesserae of a mosaic to form an armorlike shell. Covered with a durable substance called ganoine, similar to tooth enamel, these scales were used as arrowheads by Native Americans.

3) Can Gator Gar “Breath” Outside the Water?

Thick, spongy, and highly vascular, the gar’s air bladder behaves like a lung to aerate the fish’s blood. It has a connection to the throat, through which the gar can “breathe” when it breaks the surface. This adaptation allows the fish to live in turbid, stagnant waters low in dissolved oxygen: under such conditions, it may obtain as much as 70 percent of the oxygen it needs from the atmosphere.

The bones of the gar’s spine fit together like a series of ball-and-socket joints—a feature unique among fishes and common to reptiles and amphibians. This lets the gar move its head in an alligator-like fashion, violently nodding and thrashing to help it devour prey.

Because of its unique skeletal composition—a curious mix of cartilage and bone—ichthyologists believe the gar to be an ancient link between the cartilaginous sharks and bony fish.