How to Fish for Giant Bluefin Tuna In the Winter 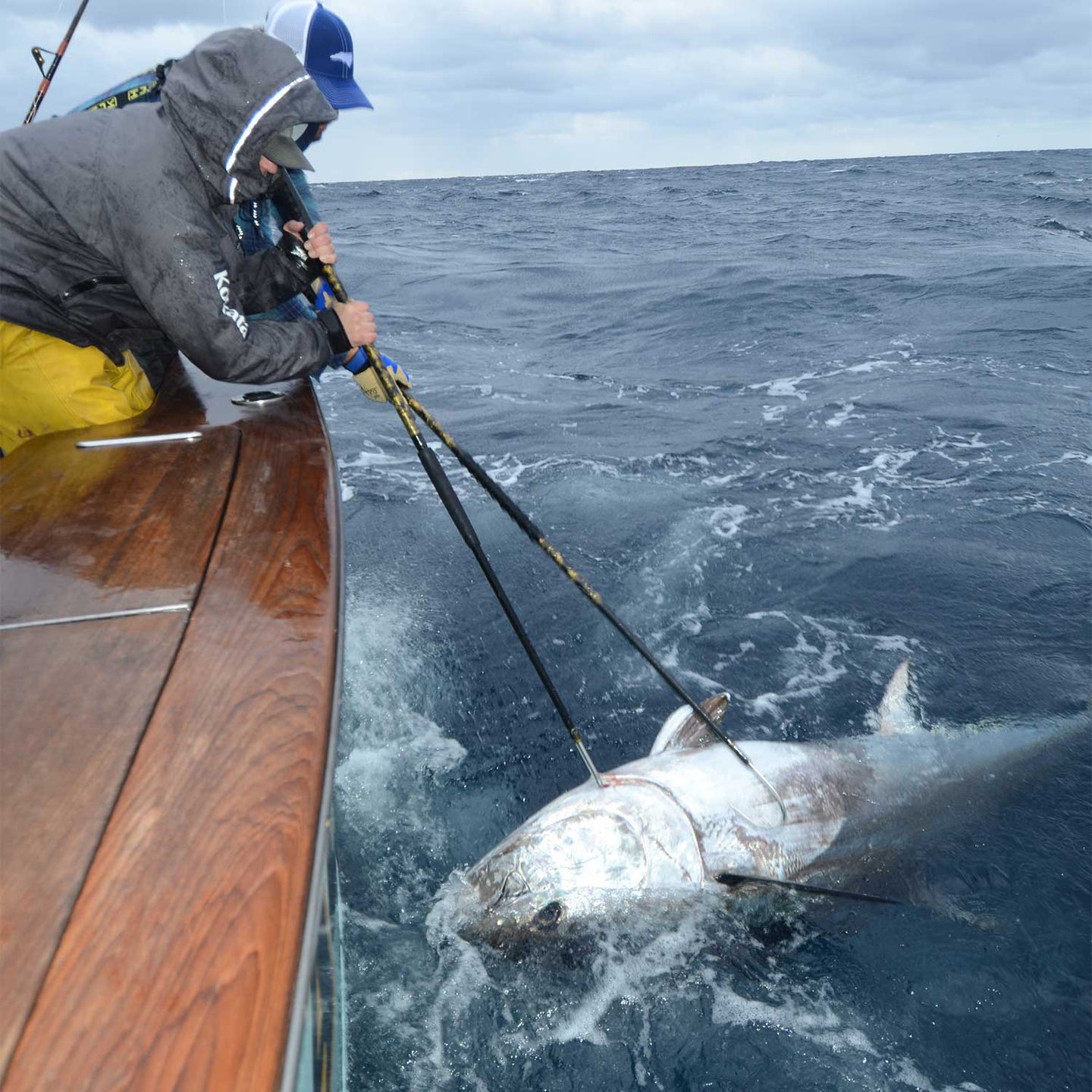 A giant comes to gaff on the Outer Banks. Ric Burnley
SHARE

Winter off the Outer Banks is raw. The sky is gray and the sea is angry. Wind streaks spray across the deck of Donnie White’s Sea Wolf, despite the captain keeping the bow of the 50-foot Carolina boat pointed into the blowing waves.

In the cockpit, a 130-pound-class rod is bent double under the weight of a giant bluefin tuna. My friends Will Fowler, Captain Charles Haywood, and Rachel Applebee have been taking turns cranking on the fish for five hours.

Most of the time, the huge fish has been directly below the boat. But every few hours, it surfaces 50 yards behind us like Moby Dick eyeing up Ahab. The seasoned bluefin anglers estimate it to weigh over 500 pounds, possibly 800.

The battle moves into the sixth hour. The giant fish is glowing blue and silver 20 feet below the hull. Each crank of the handle brings it an inch or two closer while each pump of its sickle tail pulls a few inches of line off the reel.

Finally, after another hour, the fish is within reach. As the crew moves into kill mode, the eight-foot-long torpedo makes one last burst, crosses the propeller, and cuts the line. A seven-hour battle over in a second. Even with the best anglers and the heaviest tackle, the fish still has an advantage.

Where to Find Giant Bluefins

Last winter was one of the most active bluefin seasons in history, with the biggest fish anglers have seen off the East Coast in years. Giant bluefin tuna over 700 pounds were common while 800-pounders set records and broke hearts.

Fishing out of Virginia Beach, Captain Jake Hiles got in on the action by setting a new Virginia State Record with a 708-pound bluefin caught last February. Each winter for the past 10 years, tuna have grown larger and larger. Last year’s 800-pounders could be in the half-ton category this year. Hiles says the tuna first show up in November off Cape Lookout. Then they move north and congregate along the edge of the Gulf Stream and the Continental Shelf. “The fish will ride eddies of warm water that break off the stream,” he says.

On a good day, the tuna are actively feeding on the surface, glistening in the sun, and throwing up geysers of sea spray. Other times, Hiles spots tuna swimming like a squadron of blue-black torpedoes riding the waves.

Without visual confirmation of feeding tuna, Hiles looks for birds and oily slicks on the surface. Otherwise, he monitors the fishfinder for big arches deep below the boat.

The Right Bait and Rigging for Giant Bluefin Tuna

To target giant bluefin tuna, Hiles trolls large-skirted ballyhoo at five knots. He gets the biggest ballyhoo he can find, and rigs them on a 5- to 7-ounce Joe Shute head with a Mustad ½ 7692 hook. In addition to the heavy lure, anglers will run Sea Witch skirts and naked ballyhoo.

Hiles crimps the hook to a 200-pound-test fluorocarbon leader attached to a wind-on swivel, which is attached to an 80-pound-test monofilament topshot and 150-pound Dacron backing. This all gets spooled onto a 130-pound outfit capable of producing 30 to 40 pounds of drag.

Stopping a giant bluefin requires a lot of pressure, but Hiles warns against cranking up the drag. “The hook will work loose or the fish’s teeth could saw through the line,” he says. Instead, he suggests anglers try to apply just enough pressure to work the fish to the boat.

Hiles drops his baits up to 100 yards behind the boat to widen his spread and allow the lures to run deep. Recently, he’s experimented with using planer boards to move his lures farther away from the boat.

Read Next: How to Bleed and Ice Tuna Fillets for the Freshest Meat

“I can run the planers 100 yards to either side of the boat, then drop the baits 100 to 150 yards back,” he explains. Hiles has modified his planer boards to troll up to 6 knots and hold a heavy skirt and large ballyhoo. “I had to experiment with the connections to get them to work.”

To catch the recent Virginia State Record bluefin, Hiles pulled another trick out of his box. After trolling for tuna all day, he and a friend set up to drift after dark. Once the sun went down, he put out a couple artificial swimbaits that he helped develop called Stinky Tinkys. It’s a perfect likeness of a tinker mackerel. “We 3D printed an actual mackerel then recreated the baitfish in soft plastic,” he says.

When the record fish hit, Hiles says it swallowed the lure. Even after the crew had gaffed the huge tuna and secured it to the boat, it took them two hours to get it in the vessel, he says. Then it took another 10 months for the catch to be certified as the next Virginia State Record. “I don’t think I’ll ever get that lucky again,” he admits.

Many anglers look at the annual bluefin tuna migration to the Outer Banks as the best chance to do battle with a monster bluefin. Captain Dan Rooks on the Tuna Duck specializes in light tackle bluefin fishing. Each winter, he hosts anglers from all over the world looking to test their fishing skills with topwater lures and vertical jigs.

After an excellent year in 2020, Rooks expects even better fishing this winter. He plans on the fish showing up in January, but says the best fishing will be in early spring. “Last winter the fish were congregating in February and by March it was really heating up.” Rooks says the tuna respond to the cold water side of the Gulf Stream break.

“Once the water warms up, the fish will move north,” he says. Bluefin have the ability to heat their blood, so they can tolerate a wide range of water temperatures. Rooks has caught fish in 50-degree water and 70-degree water. He says sometimes the fish can be as shallow as 30 fathoms and other times they will be in the deep. The key is to find the bait the fish love. Rooks says light tackle fans don’t have much chance against the 500- to 800-pound monsters that lurk off the Carolina coast. For a fair fight, he looks for fish in the 200- to 300-pound range.

When Rooks encounters a school of breaking fish, he stops the boat upwind of them and turns the stern towards the melee. If he doesn’t see fish on the surface, he’ll mark tuna on his fishfinder. “The tuna will come up from the deep to hit the topwater lures,” he says.

Rooks has taken the outriggers off his boat to give more room to cast. When they get to a group of feeding fish, the crew takes turns winding up and unloading 6- to 8-inch topwater lures at them off one side of the boat. While this is happening, another angler drops a vertical jig from the opposite side to entice tuna that may be hanging below the boat.

His anglers use 8-foot spinning rods armed with a heavy reel and hundreds of yards of braided line. Light-tackle fans geek out on technology, fretting over line, leader, connections, hooks, and lures. It takes the best tackle on earth to beat a bluefin tuna.

Rooks says anglers usually switch out treble hooks for singles. “Treble hooks are better at snagging the fish, but a single hook has a higher chance of staying tight,” he explains.

Read Next: You Haven’t Popped A Fish Until You’ve Popped A Bluefin Tuna

When it comes to stopping a freight train, anglers need to take every advantage. Bluefin tuna explode on a surface plug like a bomb dropped in the water. Instead of chasing down the fish, Rooks lets the angler do the work, using the rod, reel, and their own strength to break the fish’s will.

Bluefin will use every trick in the book to win. The fish will dive deep, forcing you to squat low and use the line guides to add more drag; they’ll streak across the surface as you hold on and watch the fish, and the line gained on the reel, disappear into the horizon; and they’ll swim under the boat, dragging line into the running gear.

In the end, due to tight regulations on killing bluefin tuna, most of the fish are released to fight another day. But, more often than not, broken line, leaders, hooks, or rods often end the battle with a W in the tuna’s column.

Following in his father's footsteps as an outdoor writer, Ric Burnley had big shoes to fill. After his dad, Eric, gave Ric his first job contributing a weekly fishing report to The Fisherman Magazine, the younger Burnley took to the profession of story-making and storytelling. Over the past two decades, Ric Burnley has entertained and educated the readers of Field & Stream, Outdoor Life, Salt Water Sportsman, Sport Fishing, and other major outdoor magazines.