How to Flyfish for Walleyes at Night

That’s right: Catching walleyes… On the fly… At twilight… Let’s do this 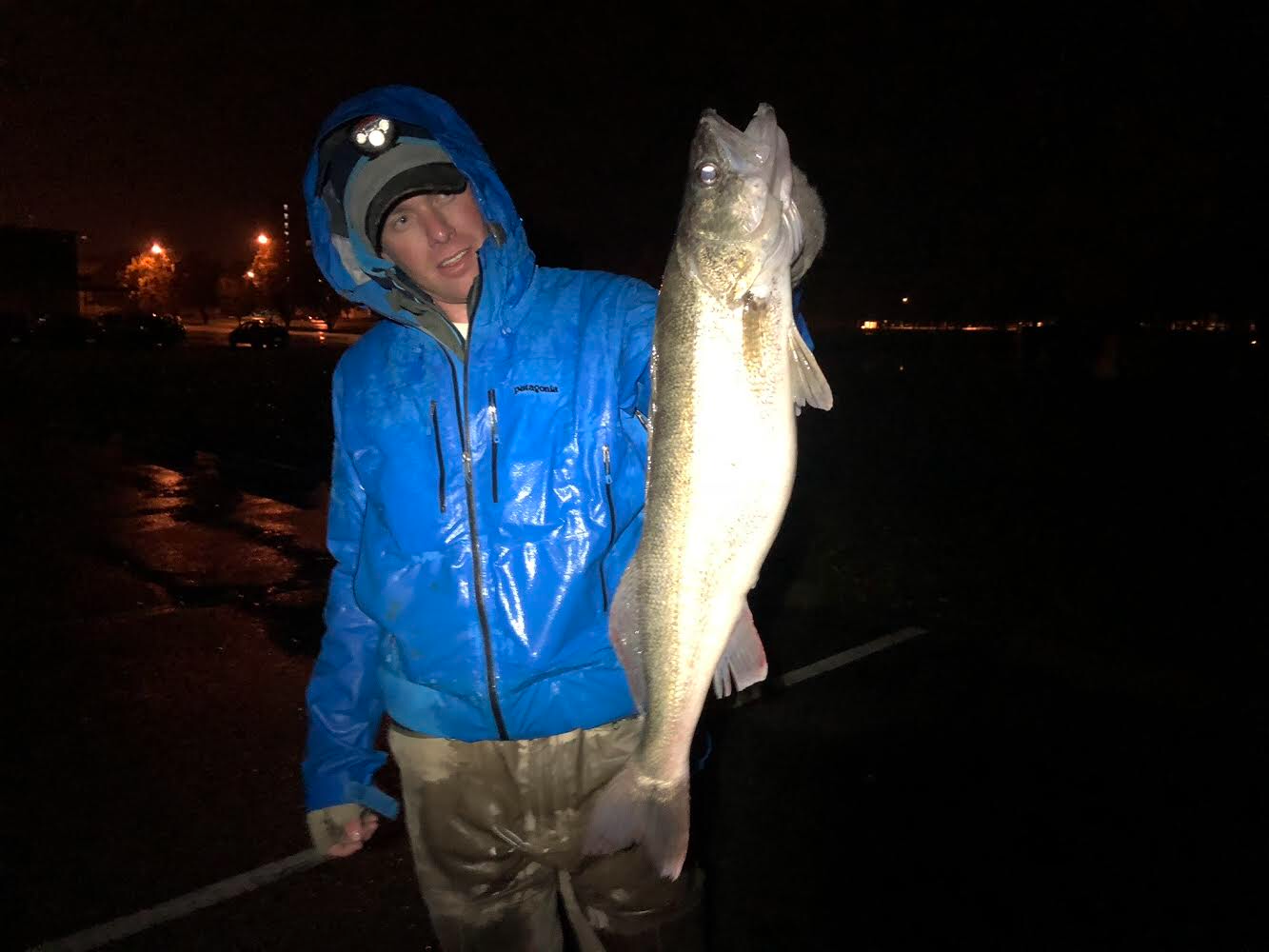 Guide and angler Bradley Dunkle shows off a nice walleye he caught at night on Lake Erie. Tommy Doran
SHARE

Fishing guide Jeff Liskay likes a challenge. Which is why, 15 years ago, he started targeting walleyes at night—with flyfishing tackle. “I like chasing a variety of fish with a fly rod that I would typically catch with conventional gear,” Liskay says. “I learned through experience that the walleye bite is better at night than during the day.”

And Liskay isn’t the only angler who has caught on to this unique fishery. Bradley Dunkle, the guide and owner of Wildwood Anglers, flyfishes for twilight walleyes, too. “It’s niche and not for the faint of heart,” Dunkle says. “You think you have it figured out, and they humble you. It’s like a puzzle you’re trying to crack. It captivates you and keeps you guessing. It will keep you on your toes.”

But when you do figure out the bite, Dunkle adds that it “makes you feel like a rock star.”

Between the two of them, these two Ohio experts have dialed in the tactics and techniques on how to flyfish for walleyes at night—and they’ve shared them with us.

When and Where to Flyfish for Nighttime Walleyes

According to Liskay and Dunkle, spring and fall are the best seasons to target Lake Erie walleyes on the fly. In the spring, you’ll catch more fish, and fall is the time to hunt for trophies. During these seasons, walleyes move closer to shore—i.e., within fly-casting range—to gorge on baitfish, such as gizzard shad and emerald shiners. Dunkle prefers to wait until the fall to chase the lager walleyes, but Liskay will begin flyfishing for walleyes as early as April.

Liskay and Dunkle both fish on Lake Erie, which offers plenty of public access to shore anglers. They recommend scouting long piers, breakwalls, and jetties. More specifically, Liskay likes to zero in on submerged structure and riprap, such as chunks of rocks that have broken off the breakwall, which attracts shad and shiners. If he can find a flat stable platform where he can cast to that submerged structure, he’ll fish there come evening.

Both guides advise arriving an hour or so before sunset to set up and practice your casting—but don’t be surprised if you hook up during one of these twilight practice casts. Liskay says the best fishing often happens right at dusk. “If the bite doesn’t happen then, the second wave may hit around 10 p.m.,” he says. “I will fish until around 11. After that, I usually call it.”

Liskay and Dunkle agree that the best way to get acclimated to flyfishing for walleyes at night…is to not fish with fly tackle. At least, not right away.

They suggest beginners start with conventional gear so they can get a feel for where the fish are and what they’re striking—and then pattern their flyfishing approach from there. “Everything that I use fly fishing, I have learned first as a conventional angler,” Liskay says. “It’s pretty crucial to find a comfort zone when flyfishing at night for walleye. I stand there like a soldier until they come to me.”

Liskay makes long casts—40 to 60 feet—and fan-casts to cover more water. “I will work my way parallel to the rocks, where the walleyes are cruising for baitfish,” he says. “The fish has to be able to see and feel the fly. I start with two-foot strips with really long pauses. I’ll count two seconds and then retrieve it. Then I count four seconds. Remember that the dingier the water, the slower the approach should be.”

Dunkle likes to use the wind and waves to his advantage. “When the line is getting knocked around by the waves and current,” he says, “use a slow retrieve and let the water do some of the work. The involuntary motion of the fly in the presentation is pivotal.” He adds that keeping the fly in the top four to five feet of water is key to staying in the strike zone. Don’t fish them near the bottom.

Once you come tight to a fish, Liskay says to keep the drag loose. The intensity of the fight can vary, but he says, “Don’t expect them to rip the rod from your hand like a steelhead.”

When you are ready to land the fish, flick on your headlamp and grab your long-handled net. “Walleyes often strike closer to the shore, so the slack running line can be an issue,” Liskay says. “In those cases, I hand-play the fish. Keep the rod to the side during the fight and high-stick it at the end right into the net.”

Baitfish fly patterns, such as the Clouser Minnow, work great on walleyes. Amazon

Dunkle prefers a 10-foot, 7-weight rod, and also uses both floating and sinking lines. He will also bring a conventional rod and reel and some buddies along to share intel on patterning. Dunkle said he is often the one catching the fish with his fly rod when other tactics fail, drawing plenty of attention from conventional shore anglers trying to get a look at his fly.

Both guides favor larger flies with profiles between 3 and 6 ½ inches. When considering the best flies to get started, Liskay likes Clouser Minnows, Game Changers, and Deceivers. The color variations are unlimited, but he will use chartreuse and white, white and blue, and black and red depending on the conditions and water clarity. He tries to pattern the fly based on the conventional approach that is working best.

Dunkle will fish BULKhead Double Deceivers, Zonkers, and articulated Rabbit Strip Divers. As for colors, he prefers black, white, gray and silver, and redheads with white bodies. Dunkle stresses the important of belly color since the walleyes are looking up at the fly. Orange and pink bellies work well.

Finally, Liskay recommends buying or making a stripping basket to manage the line and avoid getting tangled on the rocks or pier. It will eliminate a lot of tangled frustrations.