How to Icefish for Giant Walleye, Lake Trout, and Perch 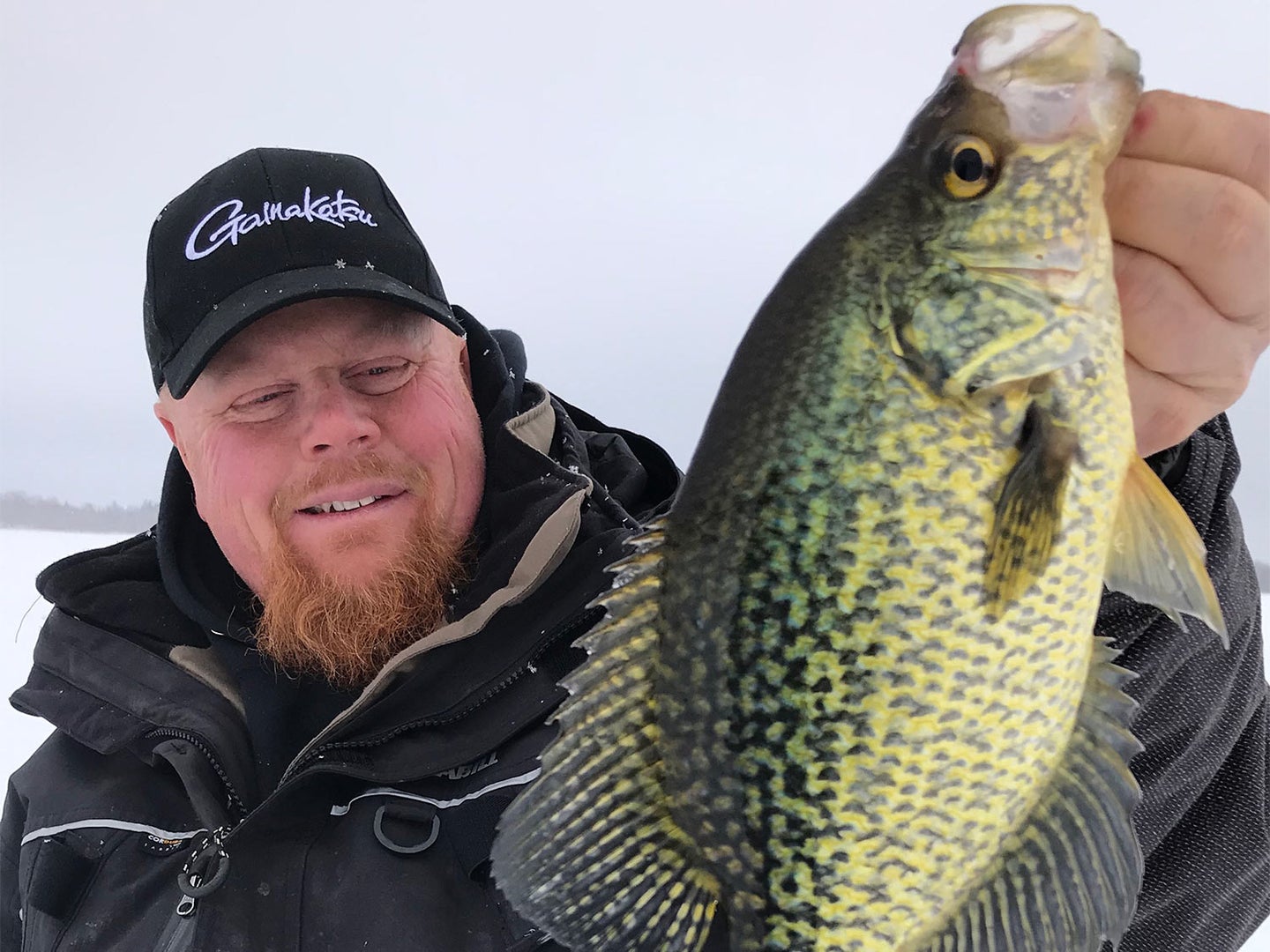 Brian “Bro” Brosdahl is one of the leading icefishing experts in the country. Brian Brosdahl
SHARE

As temperatures keep dropping, that means that the season’s first layer of thick, fishable ice isn’t far behind. For beginners, icefishing can be a daunting pursuit. Since you don’t have the freedom and flexibility to motor from spot to spot, how do you know where to start on the ice? No need to fret, because the three expert icefishing anglers in this story have you covered. Combined, they have decades of hard-water experience behind them, and they can help you figure out not only where to fish and what tactics to use—but how to catch some of the biggest fish of your life.

Minnesota-based guide Brian Brosdahl—known simply as “Bro” in many fishing circles—is a multi-species expert. Here, he shares his best tips and techniques on how to fish for slab crappies, monster pike, and beefy walleyes.

Crappie: “For numbers, I really love to icefish shallow, healthy lakes on the weed edges and in the vegetation,” Brosdahl says. “But the big slabs often lurk deep in the basins, wherever there is forage.

“For large crappies, I’ll use a small spoon, like a Buck Shot Rattle Spoon in dark, stained water,” he continues. “Remember that in some lakes, it’s a finesse bite. I also like to fish jigs like the Mooska or a Mud Bug with a little tail or tipped with a minnow head or a wax worm.” He likes to use a wiggle on the retrieve to mimic the motion of a baitfish. “Keep it above the fish. Don’t set the hook in the middle of the school. Pluck the star off the Christmas tree. That way, their friends won’t know.”

Brosdahl uses 2- to 3-pound line for crappies. “In vegetation, you can go thicker, but open water will make heavier line stand out more,” he says. “Don’t use split shot or sinkers. These are big creatures, but their mouths are fragile. Just pluck them with a slight uptick when you set the hook. Be patient. You might just see a twitch. It’s a very subtle bite.”

Walleye: Brosdahl targets trophy walleyes in the late fall. Scout out areas of good walleye habitat like structure with weeds or rocks on top. Whitefish tend to spawn in these areas, and the walleye come in to chase the whitefish. “Chasing big ones is fun because they are as heavy as they’re going to get,” he says. “These early feeders are fat, and larger baits are the key.” A big sucker minnow rigged on a 2.5-inch Buck Shot Rattle Spoon is a real walleye treat, he says.

Brosdahl adds that you don’t have to use a giant bait to catch walleye. You can also fish what he calls a Bloody Stump. Take a minnow and snip it just past the air sack so that it’s still alive. Hook the minnow through the top of the nose and have it exit through the bottom of the jaw. “The carnage appeals to a walleye’s predatory instincts,” Brosdahl says. “When fish are aggressive, I’ll use a whole lively minnow and jig the whole works.”

“Another good technique is pounding the bottom of the basin and pulling up fast,” he says. This strategy can get the big walleye cruising the bottom and trigger their instinct bite. “They have their instinctive lanes, but sometimes in deeper water, they’ll suspend and feed up. Remember that walleyes can’t always see it, but they can feel it. Start jigging at about 6 to 8 feet deep for suspended walleyes and work it down. I like to drop it down and stir up the bottom because walleyes eat crayfish and frogs, too.”

Northern Pike: “I like catching large pike—not the nuisance pike,” Brosdahl says. “For big pike, I fish large lakes that have plenty of forage. Pike are fun because it’s a different kind of fishing. I like to set lines because pike are usually not as active. Try using sucker minnows, or dead baits that are oily and stinky on a Northland Predator Rig. Big pike love oily, stinky baits.”

Another technique Brosdahl uses is jigging a lively sucker minnow or jigging a big, fluttery spoon. He likes using colors like red and orange to imitate perch and bluegills. Something with a silvery or golden flash works, too.

Brosdahl says the pike bite is definitely a waiting game “We’ve set up a portable couch and chairs and a fire pit. It’s hard to be patient when you want them to bite now, but landing that trophy often requires patience.”

Tim Moore got hooked on icefishing by chasing smelt with his dad among the shanties dotting the Great Bay coves. For the past 14 years, he’s been guiding professionally on Lake Winnipesauke, in New Hampshire, and focusing on trophy white perch.

Moore fishes with a 28-inch spinning rod and 4-pound line. He uses heavier test because he likes to get the fish up quickly. He says white clam-blade jigs work well in the clear water of Winnipesauke. “We use a single hook point tipped with a worm to get them going,” he explains. “If they’re finicky, we may tip with a maggot instead. After that, it’s run and gun.”

The strategy for jumbos is to hunt the basins. “White perch fishing translates well to striper fishing,” Moore says. “They school up by size, they are nomadic, and they migrate to spawn. White perch work a school of bait, and some days you can go from nothing to 15 feet of fish below you in a matter of moments. The biggest fish tend to stay on the bottom or the outside of the school. Try to get on the bottom and retrieve with a slow, short cadence—use a tap, tap approach. Once one comes away, more will follow. Get that first one to bite, and it’s game on.”

Howe is a Montana guide and outfitter who grew up loving anything that has to do with the outdoors. “Something about icefishing checks all the boxes for me,” Howe said. “And if I had to choose one outdoor pursuit, my true passion is chasing monster lake trout.”

Lake Trout: “Lake trout are large, aggressive predators,” Howe says. “Number one, you have to have good electronics. I like to use a simple Vexilar flasher in really gnarly conditions.” Howe fishes for big lake trout in 60 to 200 feet of water. “A camera has limitations. It’s important to understand maps and what the fish want. Look for major structure, cliffs, and drop-offs. We’re fishing huge bodies of water.

“Lake trout spend time on the move looking for forage,” he continues. “They’re hunters. They’ll camp on a school of fish, but they’re constantly on the move.” In terms of forage, lake trout eat cicso, whitefish, and yellow perch. The essential baits Howe likes to have in his arsenal are heavy, flashy spoons like the Super Leech Spoon from Clam Outdoors. “I start with a heavy flutter spoon, with lots of weight, thump, vibration, and flash. I don’t tip it. I use it to gauge the movement and aggression of the trout.”

Howe likes to hunt and catch the most aggressive fish in the pack first. “If I can take the biggest fish, the rest will fall in. If you’re fishing as a team, while you’re fighting the monster, start popping holes and drop down. Your buddy will get the second biggest.”

If spoons aren’t working, Howe likes tube jigs, particularly those with a few gashes and battle scars and scent in the body. “The more torn up the tube, the better it performs,” he says. “Lakers tend to stun a baitfish. One or two lakers will shred through a school of baitfish. They will stun or injure them, and the biggest ones will pick off the injured.”

Howe fishes with light tackle, even though 20-pound plus lakers are common. “You need something medium to medium-heavy—30- to 40-inch rods with some forgiveness,” he says. “Braided line is a must with a fluorocarbon leader, especially while you’re banging jigs.”

Keep a tight line on lake trout because they can turn and move so fast. “That’s the beauty of lake trout fishing,” Howe says. “That fish is in control, and you’re along for the ride.”