Most fish you catch on the fly will be in close range, but sometimes you need to go the extra distance 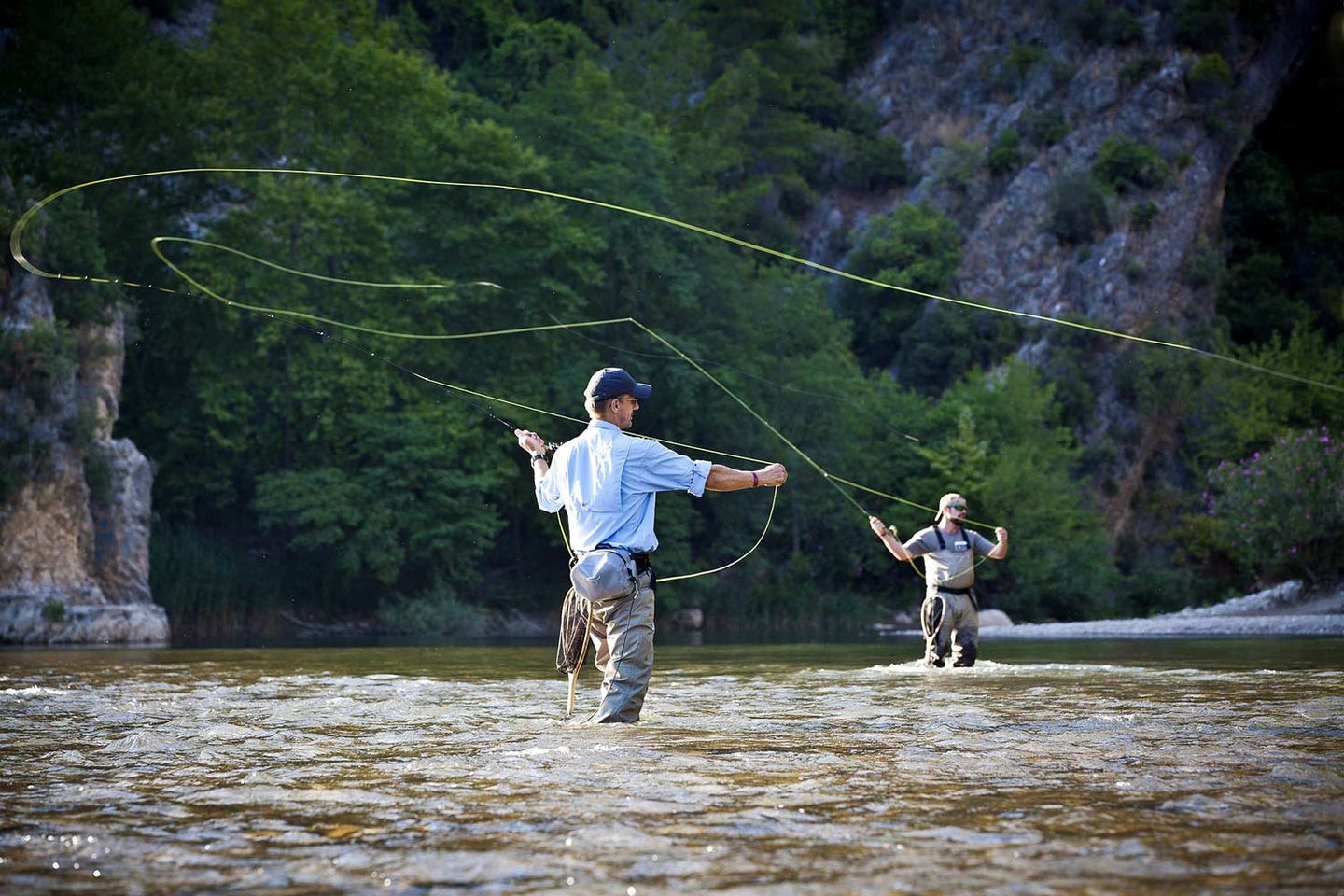 For longer fly casts, you’ll need to go beyond 10 o’clock on the backcast. Glittenberg/Pixabay
SHARE

It doesn’t matter if you’re fishing for headwaters trout or bluewater sailfish, there are times when launching a cast at maximum distance is the only way to put a fly on the dinner plate of your target fish. And since learning how to bomb out long casts requires tight loops and line speed, it’s a skill that helps when casting at shorter distances with a challenging wind.

The good news for novice to intermediate casters is that every step listed below will help improve your fishing skills on its own. But put together four or five of these tips, and you’ll be amazed at how quickly your fly heads for the next county.

1. Move the Fly, Cut the Slack

It’s the bane of both beginner and experienced casters alike: You must have zero slack in the line before picking the line off the water and making the first backcast. Zero. The best way to make it happen is to point the rod directly at the water, pull out the slack until the fly moves just a smidge, then start the backcast. A little bit of slack can be fixed on a shorter cast. But on a longer cast, just a slight bit of droop will magnify into larger and larger loops. Point the rod, move the fly, start the cast.

The standard issue 10-o’clock-to-2-o’clock casting stroke won’t get the cake baked when you’re trying to reach distant fish. For long-haul casting, you’ll need to move the rod tip over a longer plane to develop line speed. Just be aware that the fly line follows the rod tip. To prevent the loops and tails that come when casting lots of line in an arc, engage the shoulder on both the forward and back casts to keep the rod tip moving in a straight line.

The best rods are capable of greater feats than I can wring out of them, which leads me to a line I tell folks all the time: You’re holding hundreds of dollars—maybe a thousand dollars—worth of technology and materials in your hand, so let the rod work. It’s amazing how much farther you can cast when you slow down, concentrate on feeling the rod load, and apply smooth power to the cast. Watch and feel and listen to the rod, and you’ll get your money’s worth with long-distance casting.

The backcast should be a near mirror image of the forward cast. If you spot widening loops or waves and wiggles in the line, restart the cast. Cast sidearm, and watch how the line responds to your movements as it straightens out behind you. You might pick up on issues such as dropping your rod tip by seeing how the fly line is shaped on the backcast.

5. Dial in on the Double Haul

If you don’t know how to double haul, learn. You simply won’t reach out and touch distant targets without a solid, smooth pull on the line on both the forward and backcasts.

Read Next: How to Double Haul with a Fly Rod

I recently signed up for a one-on-one video fly casting lesson with fly-rod ace Pete Kuntzer at the Orvis Virtual Casting Instruction Program, and it took Kuntzer about three seconds to pick up on a casting goof I would never have uncovered. On the backcast, I was rotating my wrist outward ever so slightly, which was putting a funky behind-the-head twist in the line where I might never have seen it. It was robbing my line of its straight-line force and speed, and cutting into the delivery distance. Kuntzer counseled me to watch my rod hand as it moved past my eyes, and focus on the ridgeline of my middle knuckles to keep my wrist from rotating.

One of the secrets to tight loops and maximum line speed is a concentration on acceleration. At the beginning of both the forward and backcasts, don’t suddenly pour on the power, but smoothly accelerate the power stroke. And the same with a haul or double haul. One key to maximizing distance is to iron out all the wiggles and bobbles in the line, and smooth acceleration will get you there.

It’s tempting to false cast four or five times to watch your line distance increase, but too much false casting causes you to “carry” too much line, meaning you have to keep, and manage, all that line moving through the air. That increases the chance for mistakes, such as dropping your rod tip slightly or drifting on the back cast. With a ton of line in the air, every mistake is magnified, and once the running line of the fly line is in the air, it’s very difficult to change your aim. You’ll carry less line by trying to limit false casting to three casts. By then you should have the entire line head out of the rod tip—and a little more—setting you up for a shooting the final distance.

Creep is what happens you start the forward cast before the line straightens out behind you. It’s easy to slip into the practice: You shoot an awesomely tight forward loop, power back for the backcast, but you just can’t wait to see the line again so you bring the rod forward too quickly. Bear in mind that you have to stop the rod on the backcast for just as long as you do on the forward cast. And perhaps a bit longer if you shoot line with a haul.

To maximize the length of the power stroke, learn to drift the rod tip on the back cast. You still have to come to a complete stop at the end of the cast, but once you do that, all the fundamental mechanics of bringing the line back in a tight straight loop are in play. Now you gently drift your hand back a bit—keeping the rod tip in the same plane—to give you a little extra runway and oomph on the forward cast.

At 20 feet, you can aim the fly like a rifle shot, straight at the target. At 40 feet, you might aim at basketball-rim-height to allow the fly to settle where you want it. At 50 feet, 60 feet, and beyond, you’d better throw a little elevation into the ballistics. You have to give the fly line time and space to unroll, so shift the trajectory of the forward cast high—like treetop level high.