Florida Has a New Invasive Species. And It Is Big—and Ugly

A dead arapaima was recently found in Florida. The discovery of the giant game fish has anglers curious, and fisheries biologists concerned 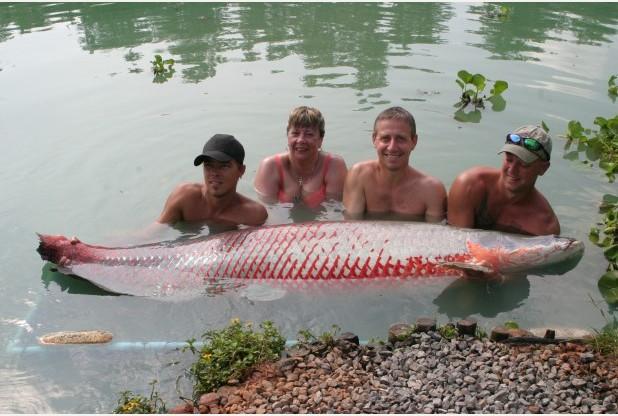 Arapaima can grow to more than 10 feet in length and 400 pounds. Dawn Hull
SHARE

As if the gators, crocs, 44 species of snakes, panthers, black bears, coyotes, and bobcats weren’t enough, Florida has been flooded with other non-native species. Recent arrivals include Burmese pythons, which can grow to up to 26-feet in length, and Nile crocodiles that can be 18 feet long and weigh as much as a small car. There’s also the herpes monkey—likely escapees from a zoo or private collection.

And now, spotted by a Cape Coral resident along the Caloosahatchee River, is one of the world’s largest predatory fish—the arapaima, which can grow up to 10 feet in length and weigh more than 400 pounds (the one pictured was caught on a rod and reel in Thailand). They’re ugly as sin, and have been unchanged for 5 million years. The Florida arapaima washed up dead on the riverbank. How that happened to a fish with scales as big and tight as a coat of armor is a mystery.

Read Next: Catching Huge Arapaimas on the Fly in Guyana

Arapaima made fishing headlines several years ago when American fly anglers traveled to South America’s Amazon Basin to catch them. Those trips were named after the greatest sporting event in the 20th century, the 1974 George Foreman vs. Muhammad Ali, the Rumble in the Jungle. It’s one thing for fishermen to travel abroad to target these hard-fighting game fish. But the invasive arrival of arapaima to U.S. waters poses a lot of problems, and could be devastating to the watershed and the ecosystem.

Arapaima inhale food through their vacuum-like mouths, and their prey isn’t just fish. They feast on birds, lizards, and small mammals. They’re capable of jumping out of the water to snatch a meal. (And as their enormous weight suggests, arapaima fish eat a lot.) These prehistoric predators have a swim bladder that opens into their mouths like a lung which means they can survive in warm water. They’re like a colossal walking catfish, meaning that they can survive out of the water, living on hot, dry land for up to a day. But the biggest issue is that they can lay hundreds of thousands of eggs over their 20-year lifespan. A growing population could threaten native and migratory species big time.

Read Next: Potential Largest Freshwater Fish Ever Caught by a Woman Landed in Thailand

John Cassani, an ecologist for the Calusa Waterkeeper, told a Florida news station that the dead, washed-up fish might not be the only invasive arapaima in Florida. “Obviously a big aggressive predatory fish is popular amongst anglers,” he said. “But the risk to the ecosystem far outweighs the recreational value of the species.”