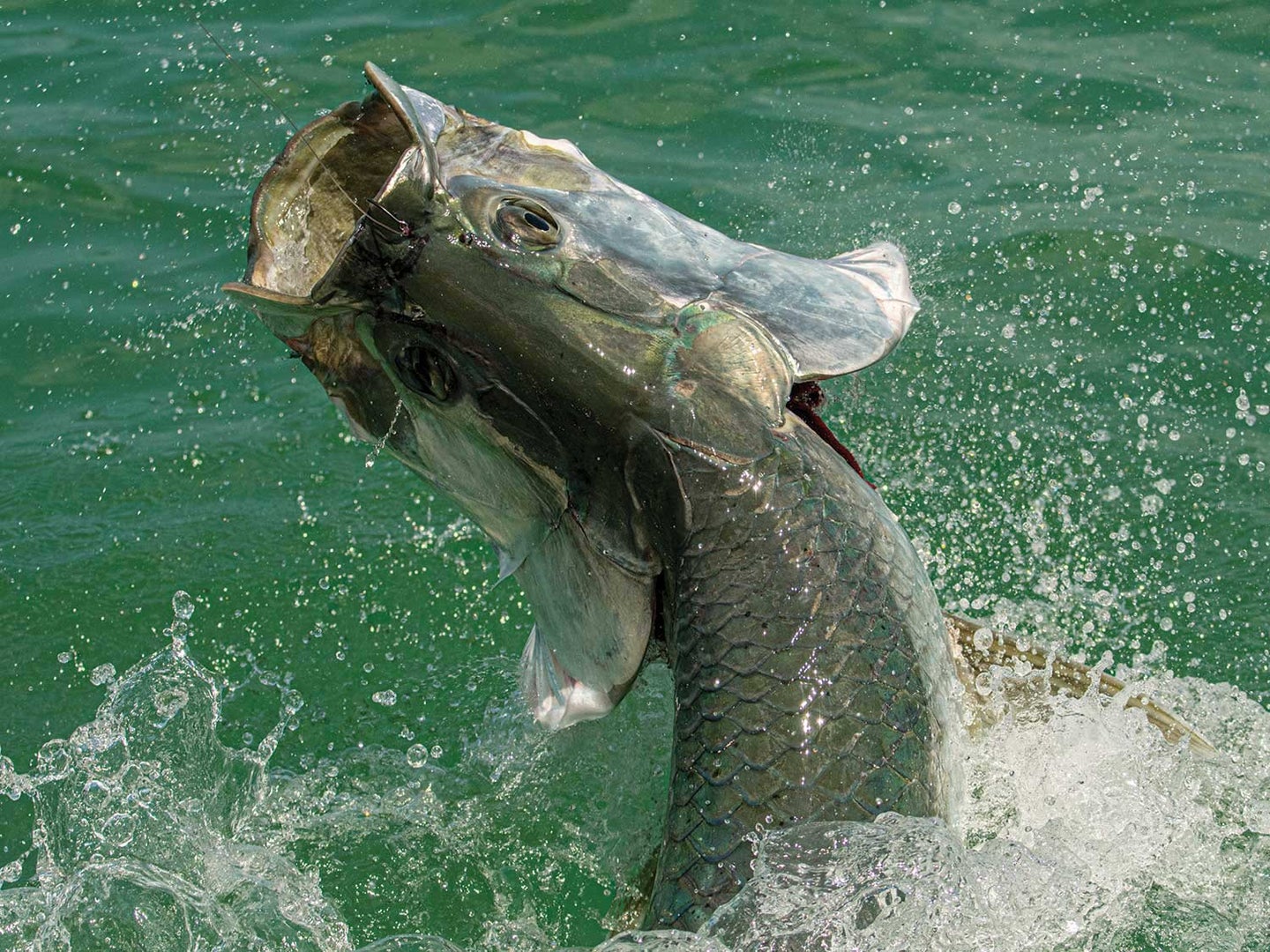 A fish breaking out of the water. david mccleaf/lance krueger
SHARE

Knots fail. Leaders snap. Lures pop free. Whatever the reason, if you spend enough time on the water, you’re going to lose fish—probably some big ones to boot. Even the pros suffer break-offs. But not too often, because they learn from their mistakes. Here, six of the best share some of those painful lessons so you’re never deprived of another grip-and-grin shot again.

Credentials: Pro for more than 35 years

Tough Break: On the final day of a big BASS tournament on Florida’s Lake Okeechobee, Schultz was in position to take first place and walk away with the prize money. “I had a strong bite going,” he says, “working a Rapala minnow far ahead of the boat, in a boat trail that cut through a massive field of mixed ­vegetation—pads, grass, and reeds. Then I hooked a huge female largemouth that headed straight for cover to bury herself deep in dollar pads.”

Instead of going toward the fish, Schultz tried to yank the lunker free—and his 14-pound mono snapped. “It was a rookie mistake,” he says. “That fish would have won me the event.”

Lesson Learned: “Often, bass anglers after big fish are flipping in heavy cover,” Schultz says. “That frequently leads to fish that become caught in matted milfoil, lily pads, reeds, or flotsam. That’s when many anglers tend to do the wrong thing—trying to muscle a trophy bass out of the cover. Rarely does anything good happen from that.”

In fact, Schultz goes on to explain, when a largemouth bass is pinned in the weeds, that can work to your advantage. “For some reason,” he says, “when they’re stuck, big fish often stop thrashing and just sort of sit there.”

Seeing the fish and its situation can allow a fisherman or his partner to reach down and get a good hold on the largemouth. Of course, bass are often hooked in relatively open water. That’s when Schultz’s other go-to tip for fighting trophy fish comes into play. “Anytime during the fight you feel that fish rising to the surface like it’s going to jump,” he says, “get your rod tip in the water.” Doing this rolls the fish downward and keeps it from breaking the surface—and possibly spitting the lure. But Schultz adds that you shouldn’t “bow to the king,” as anglers do for leaping tarpon. Instead, keep the line tight as you dip the rod.

Tough Break: Frank Campbell recalls a day on the Niagara River nearly 20 years ago. He and a friend were catching steelhead on light lines, 6- and 8-pound-test, and with very small Rapala Origi­nal Floating Minnows. Late in the day, Campbell’s buddy hooked a solid fish. “But by that time, we were drifting toward a really turbulent stretch,” Campbell says, “and we saw that it was a big fish, probably 23 pounds.” With the boat spinning in the rushing current, the angler tried to put some heat on the monster. When one of the lure’s hook points snagged in the net’s mesh, the big fish—not yet tired out—thrashed enough to tear loose and was gone.

Lesson Learned: Looking back on that memorable failure, Campbell says the current really forced their hand. Normally, when fishing calmer water, he reminds his anglers to slow things down and finesse the fight whenever they hook big fish. “I’ve landed brown trout more than 30 pounds on little lines like that by taking my time,” he says. If they’d been able to take their time in this case, Campbell is nearly certain they would’ve landed the tired fish. Campbell notes that most anglers have a natural inclination to try a bit too hard, particularly when they know a steelhead or any trout could be a trophy and much is at stake. “Don’t rush it, and you’ll land that fish,” Campbell says. “More big fish are lost when an angler tries to rush them to the net than for any other reason.” He also believes the loss of that fish might have been avoided if they had upsized the hooks on the small lures that were proving successful. Larger hooks would’ve ensured more purchase in the big fish’s mouth, which might have kept that trophy buttoned on when it thrashed at the net.

Credentials: Guide for more than 20 years

Tough Break: Robertson and a friend had lucked into a school of giant walleyes. They’d already caught 23 fish over 10 pounds when both anglers hooked up again. As Robertson netted his, a 14-pounder, he saw his partner’s walleye near the boat—and it was much bigger. “The biggest walleye I’ve ever seen,” he says. Robertson called out, “Stand by! I’m trying to get this fish free of the net!” Just about then, he heard his buddy’s lure whack the outboard cowling after it flew out of the immense fish’s mouth.

Lesson Learned: Looking back, Robertson wishes he’d reminded his partner to go slower in getting the fish to the net. “As anglers, we tend to push fish too much to get them to the boat,” he says, “especially when we see a big one.” Given how hard the lure struck the motor when it popped out, he’s positive that his buddy put too much pressure on the fish.

“Giant walleyes often fight very little, so a fresh trophy can catch us off guard when it suddenly comes alive at the boat,” he says. Robertson adds that although braided line was key to getting deep for the bite, its lack of stretch also requires more vigilance on the part of an angler when fighting a fish. Since that loss of a possible record walleye, Robertson now keeps two nets on board. He makes sure those nets are big, with wide mesh, which creates less drag in the water. And they should have long handles. A 9-foot handle, for example, allows you to reach out and net the fish sooner than you could with a 3-footer. Reaching a fish that much sooner could make the difference between a fish in the net and a potentially perilous boatside lunge.

Tough Break: Before he set out lines on the Red River, Durick reminded the lone fisherman on his boat not to try to set the hook, since the baits were all rigged on circle hooks. Unfortunately, that message didn’t get through. A rod next to Durick’s client started to bend suddenly under what the guide says was an enormous strike. Before Durick could react, the fisherman reached out and in one motion jerked back with everything he had. But missing the huge catfish wasn’t the end of it. In his rush, the client failed to get a good grip on Durick’s brand-new rod and reel, which launched out of the angler’s hands and fell into the river.

Lesson Learned: Durick rigs his baits only with circle hooks—quite successfully for channel cats—so he emphasizes the importance of waiting for the fishing rod to load up, then keeping it tight and just cranking. Most of the time, you’ll hook the fish. He also recommends using hooks with a gap wide enough to clear the bottom jaw. He explains that catfish tend to pick up a bait and squeeze it in a way that hinders the corner-of-the-jaw set. If the circle hook is large enough, it’ll pierce the bottom of the fish’s mouth for a more secure hookset.

“I’ve had lots of people complain to me of missing hookups,” Durick says. “It turns out this is because their hooks were too small.” And once someone’s got a giant catfish on the line, Durick says he is “constantly preaching the need to keep the fish turned away from the boat when they get the fish close. Don’t let a big catfish get under the boat. It might tangle in an outboard’s lower unit, plus once it’s under the boat, a big cat is harder to net.”

Tough Break: Scepaniak was taking two anglers, Brad and Tom, to a spot on Mille Lacs Lake where he’d seen a huge muskie just a few days earlier. Sure enough, as Brad made a figure eight with a big spinnerbait near the boat, a giant muskie inhaled his lure. The fish cleared the water four times as Brad kept steady pressure and lowered the rod each time—until the fish’s fifth leap, when the rod stayed horizontal. The muskie shook its head one way, and the lure flew the other.

But the heartbreak didn’t end with that first lost muskie. Later on that day, Tom failed to set the hook on a fish when he thought his lure had just snagged some weeds. That mistake cost the anglers their second ­giant of the day.

Lesson Learned: Scepaniak says the loss of those two monster muskies illustrates his two fundamental rules when it comes to hooking and holding onto big muskies. “First, set the hook on everything and anything,” he says. While we’d love every strike to be a rod-thumping whack, ­Scepaniak says that most muskie strikes will be more tap than wallop, and if a lure doesn’t feel right, “they can spit it out in a fraction of a second.” So, the instant the angler feels resistance, he or she has to react with a strong hookset to penetrate the bone-hard mouth of a muskellunge.

Second, when a fish is coming out of the water during a jump—­Scepaniak says that 80 percent of muskies will jump during a fight—­anglers should keep that rod down and not stop cranking. Conversely, he advises anglers to remember to get the rod up when that big fish goes back down.

Had Brad and Tom remembered those two rules, ­Scepaniak says, and had the fish stayed hooked, he would have advised them of his third rule: Back off the drag, particularly if you’re fishing with braided line.

Tough Break: At the end of a long and so-far-fishless day, outside of famed Boca Grande Pass, one of Bennett’s anglers finally brought a good tarpon, in the 100- to 150-pound range, boatside. “As soon as I grabbed the leader, out of nowhere, a 15-foot hammerhead raised its front half out of the water, like in the movie Jaws, and grabbed that tarpon,” Bennett says. “His hammer actually whacked my hand. It was that close.” The huge shark began shaking the tarpon back and forth into the side of the boat, using the boat for leverage as it shredded the fish, until both shark and tarpon were gone.

Lesson Learned: Big sharks, primarily hammerheads and bulls, are a fact of life for tarpon enthusiasts who fish in Southwest Florida. When encounters with sharks do happen, the concern is less about landing a tarpon to score a release than it is about saving the fish, and Bennett has become an expert at that. Hammerheads—with a dorsal fin sometimes taller than the bow of his skiff—often show themselves before launching a tarpon attack. Big bull sharks, however, are notorious for staying down and suddenly grabbing a fish near the boat. Bennett relies on side-imaging sonar to scan the area while an angler fights a tarpon. “If I spot a big shark moving in,” he says, “I’ll break the line to let the tarpon go while it still might have a chance.” Or, if a tarpon is already at the boat and Bennett sees a shark, he’ll keep the tarpon close to the boat while he motors to shallower water, where he’ll revive and release the fish.