Learn how to land trout, bass, panfish, and more like an old-school expert 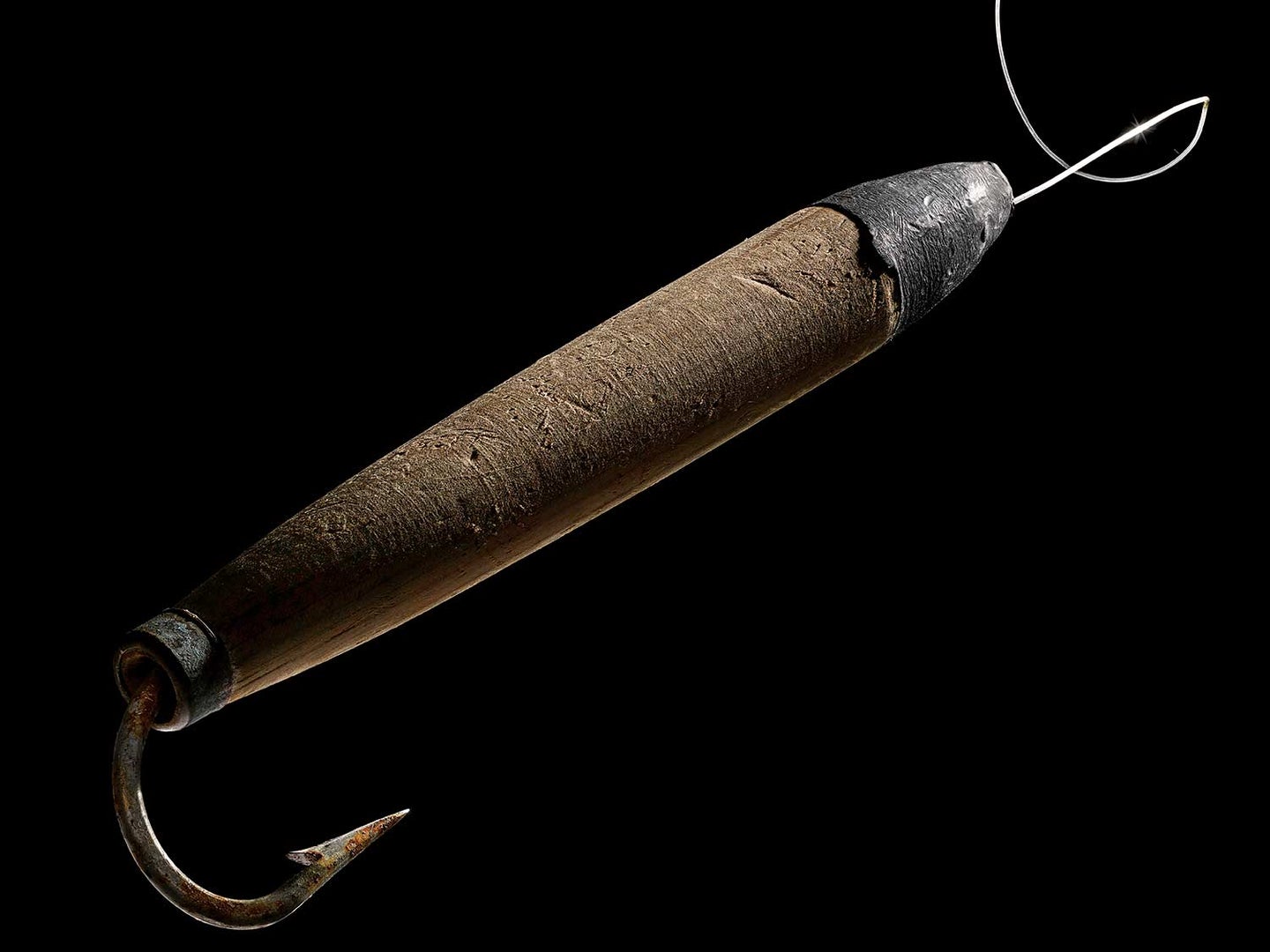 An old-fashioned cedar plug is a simple but deadly lure on tuna. Nick Cabrera
SHARE

Head out to the deep blue on a modern offshore sportfisherman, and you’ll likely be trolling new-school spreader bars, daisy chains of chugging squids, and splash birds that kick up a hell of a fuss. All these things put tuna in the boat—but so do plain cedar plugs. If you don’t see any on that modern boat, be wary of your captain’s knowledge.

One of the oldest trolling lures ever made, cedar plugs have tapered wooden bodies and bullet-shaped lead heads. They’re simple, but they mimic the shape of a ballyhoo or cigar minnow perfectly. The leader runs through the center, allowing the hook to seat in the tail. You can buy them painted in a wide range of patterns, but there’s just something about an unfinished, raw-wood cedar plug that makes magic happen—often when nothing else will. Their ability to wobble and dart, constantly changing direction, is unmatched by any lure. You can send them out to any distance in your trolling spread, but the corner flat-line position is often the killer. You want that lone cedar dancing close, right outside of the prop wash, 10 to 15 feet from the boat. To maximize the action, get the line as parallel to the water’s surface as possible by running it from the rod tip to a release clip or rubber band attached to the stern cleat. If you’re lucky enough to be looking at that cedar when a big bluefin makes the grab, you’ll never forget the boil. —Joe Cermele

When I was a kid, there was a box of inline spinners in one pocket of my vest, and jars of salmon eggs, mealworms, and PowerBait in the other on opening day of the trout season. The program was to throw spinners in the fast stuff, and hunker down with bait in the slower, deeper runs. These days, it seems like I see more people on the move, “power fishing” a trout stream, than posted up, carefully drifting baits. If you think bait dunking is an old man’s game, you’re missing out on some big trout.

Scoring reaction bites on lures is great when trout want to move, but 90 percent of all their feeding happens close to the bottom. Just as in nymphing with a fly rod, the trick is a natural presentation, whether you’re drifting worms or cheesy dough. I learned from Matt Wettish, a

Connecticut-based trout guru known as the Mealie Master, that scaling down to 2-pound line is the first step in getting a natural drift. Wettish only uses BB-size split shot, adding one at a time until he has just enough weight to lightly tick the bottom. To reduce weight even further, he uses a size 12 scud fly hook with his worms, but I’ve found that hook to be just as effective with eggs and dough. —J.C.

I was fortunate to start my angling career on stingy water, which instilled in me the twin blessings of humility and low expectations. Camp Inverness had a small lake almost devoid of fish. What few there were got pounded by boys like me, each armed with a push-button reel, a hooked nightcrawler, and a red-and-white bobber the size of a tennis ball. You baited up, cast, and tried to make the bobber go under from the pressure of your brain waves alone.

Looking back, I’m struck by how stubborn I was. There was a 90-minute break during those hot afternoons, and I nearly always spent that time fishing and working on my sunburn. I caught a fish maybe one day in four (and never more than one fish in a day), but I never thought about not fishing. There simply wasn’t anything else at camp I wanted to do as badly. My catch was all bluegills. One day, when another boy caught a small largemouth, he instantly rose to the level of king of our little roundtable. A bass was a grown-up fish, a serious thing.

From all this experience, I learned nothing—by which I mean that I learned to expect nothing. Otherwise, I knew instinctively that I’d have gone mad from frustration. This lesson wasn’t conscious, by the way. It was just a reaction to reality as it was structured at the time. Maybe the appeal of fishing was the act itself. I had an unusually busy mind for a 9-year-old, and what I liked about fishing was how it drowned out conscious thought. I couldn’t really think about anything else while I watched my bobber. I was just there. I was in a trance. I was fishing.

The essence of all fishing and hunting—what makes the sports so compelling to certain people—is the uncertainty, the mystery. It has always been thus. Anthropologists widely credit this mystery as the source of religion. Early man’s existence depended on finding and killing game animals, and to have his survival depend on something that he could neither control nor predict required the intercession of divine forces. Before long, this led to Baptists, Presbyterians, and Methodists—not to mention people who skip church to go fishing.

If you have to catch something to have a good day fishing, you ought to take up grocery shopping. Nobody whiffs at the supermarket. Imagine what it would be like to go fishing knowing you were going to succeed each time. It sounds fun, right? Think about it, though. Having the success of your outing assured would kill all the mystery. As well as the fun. My old friend Jack Unruh used to tell a joke about the man who died and woke up on a trout stream where every cast he hooked into another 10-inch trout. “Wow!” the guy said to another angler 20 yards away. “This must be heaven!”

The other fellow just smiled at him and said, “You’re new, aren’t you?” —Bill Heavey

4. Dupe a Largemouth Bass on a Bluegill Rig

When I was in middle school, my buddies and I used to fish strip-mine lakes that were crystal clear and full of big bass that were easy to see as they cruised the banks. I lost count of the number of casts we made at those fish with plastic worms and lizards, spinnerbaits, and jigs. Mostly, our efforts were ignored, and it caused us a lot of despair.

One day when I was complaining about having never caught a trophy bass, my neighbor Ronnie told me: “Son, get your daddy’s baitcaster, some heavy line, and a big worm hook. Thread you a little bluegill on that hook, toss him out there in front of that big bass, and hang on.”

Following Ronnie’s advice, I went to one of our favorite pits—we called it the Basshole. I’d brought with me a spinning rod rigged up for bluegills and Dad’s round Ambassador reel on a pistol-grip casting rod. It was spooled with 20-pound line, to which I’d tied on a 3/0 wide-shank hook. Rigs don’t get simpler. I caught a couple of bream, threw them in a bucket, and started sneaking down the bank. I soon spotted a big bass backed into a shadow near the mouth of a beaver lodge. I hooked one of the bluegills under the dorsal fin, thumbed the spool, and made a lobbing, 10-foot cast. The sunfish slapped the water and sank slowly. I watched the bass ease toward it, then its monstrous gill plates flared in a flash of white. The rod doubled, and I yanked, reeled, and ran up the shoreline. Five minutes later, I was walking home carrying a 7-pound bass in a Walmart sack. I still have the skin mount.

5. Use Bread to Catch Carp

White bread. For many of us, it held a rightful place next to garden worms in our earliest days of fishing. One slice created enough dough balls to catch a mess of bluegills, channel cats, and even stocked trout. But like worms and bobbers, bread usually falls by the wayside when we graduate to spinnerbaits and rubber worms. It didn’t for me, though. I may not be using it for bream anymore, but if you want to tangle with carp and don’t need to be elitist about it, a bag of Wonder Bread equals hours of fun.

It’s particularly deadly in the suburbs, where carp in ponds and lakes with high traffic (think parks) snatch their share of bread intended for ducks and geese. All you have to do is wing out a few full slices and wait. Carp cued up on bread will keep circling and nipping at the floating slices. When they do, mold a piece of bread around your hook, working it into the shape of a flat football. You need the bait to be wider so it floats, but you also need to keep it compact so it has enough weight to cast without flying off. Drop it right on the perimeter of the chum slices, and be ready. —J.C.

I carry too much stuff in my flyfishing vest—always have. Part of it is because I’m superstitious that I’ll need something I leave behind. But mostly, I just love tackle. Fly boxes take up the most space. I have one each for hoppers, streamers, caddis, etc. I also have one just for nymphs. That box is my oldest and my favorite. Not counting rods and reels, it’s also the fanciest piece of fishing gear I’ve ever owned.

It’s a Richard Wheatley box that I bought when I was 17 years old. Looking back, I don’t know what I was thinking spending that kind of money on a fly box—but I’m glad I did. Twenty-two years later, the box looks better than ever—scratched, faded, and patinaed. If I keep taking care of it, there’s no reason it shouldn’t look even better in another two decades. —Colin Kearns