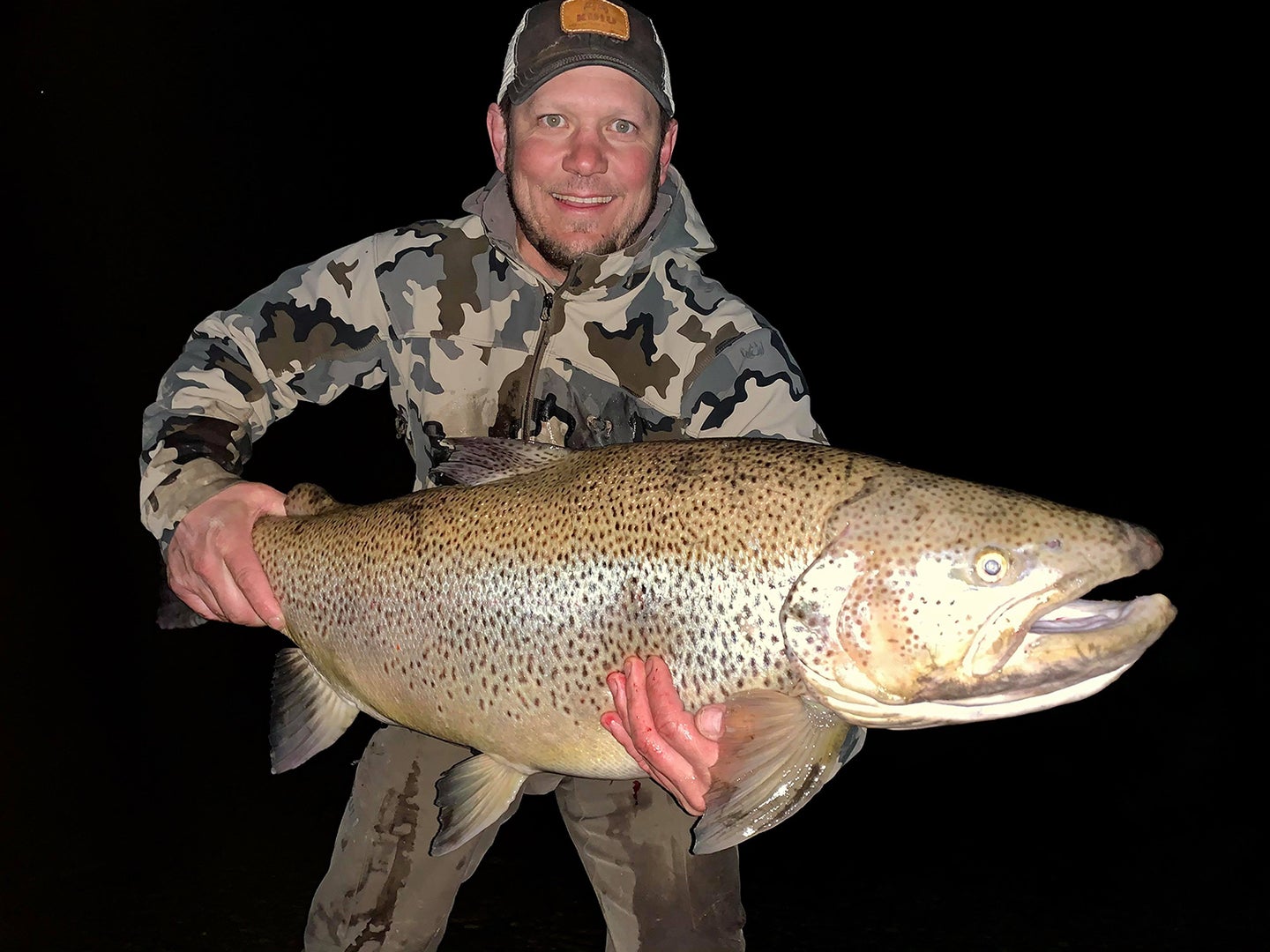 Montana is known for its outstanding trout fishing, but even that reputation was taken up a notch last week when a fisherman caught a new state record brown trout. While fishing the Marias River, Robbie Dockter hooked, fought, and landed a 32.43-pound brown trout. His fish was verified by Montana Fish, Wildlife and Parks (FWP), as the new state record. Dockter’s catch breaks the former state brown trout record that was set by E.H. “Peck” Bacon in 1966. Bacon’s record was caught in Wade Lake and weighed 29 pounds.

“We’re primarily a hunting family,” Dockter told F&S. “But when the seasons are closed we’ll go fishing. We’ll fish for trout and walleyes through the ice, but when the water’s open we’ll throw jewelry in the river. Most of the time we’ll fish in May, June, and July, but I really like the pre-run off time. My 14-year-old daughter Sierra comes along a lot. She loves to hunt and has already killed four deer, a turkey, and a bear, and she’s a fanatical waterfowler. Spring is tough because she plays softball, so during the winter and early spring we try to get out fishing at least once a week.

“When it’s light out we’ll fish for trout and walleyes,” Dockter continued. “But since I’ve always wanted to catch a 10-pound brown, I’ve been focusing my attention on bigger fish that feed around last light. Last Wednesday, I was casting a Scheel’s 6-foot ultralight rod with Berkeley Trilene 4-pound test and a 3/8-ounce Kastmaster Brown Trout spoon. When the fish hit I knew it was big. I wasn’t worried about breaking him off, because four-pound test is strong enough to land a big fish. I was more worried about the trebles straightening out, though. I fought him and eased him toward shore. By this time it was dark, so I turned on my head lamp and Sierra got the net. When my light shined on his head and back, I knew we weren’t going to get him in the net. I was worried about him rolling, so I worked him downstream until I could beach him on a gravel bar.

“Sierra said, ‘Dad, I think you caught a world record.’ But we didn’t have cell service to check it out. I knew it was a good fish and thought maybe it was about 20 pounds. We took a lot of pictures by the river to make sure it was documented, and then had to drive a bunch of miles to get reception. Once we got a signal, Sierra looked up the state record and said it was a 29-pounder caught in 1966. I asked her what the new record was and I was surprised when she said that was it.

“So I weighed it when we got home, but my scale wasn’t certified so we went to sleep. I kinda tossed and turned all night, but we drove to the grocery store after breakfast and weighed the fish on their certified scale. The fish bottomed out the 30-pound scale, so we packed up and went to the butcher shop ‘cause they had a 100-pound scale. On the way I called the warden to come and look at it, and sure enough, the weight was confirmed at 32.43 pounds. I’m going to have a skin mount made and donate the carcass to FWP for research. Everyone wants to see how old the fish is and I’m kind of curious, too. There are a lot of rainbows and ciscoes in the river, so I wouldn’t be surprised if it was a big, young, healthy fish. But it’ll be interesting to know how the research goes.”