The Story Behind the New Record Bluefin Tuna 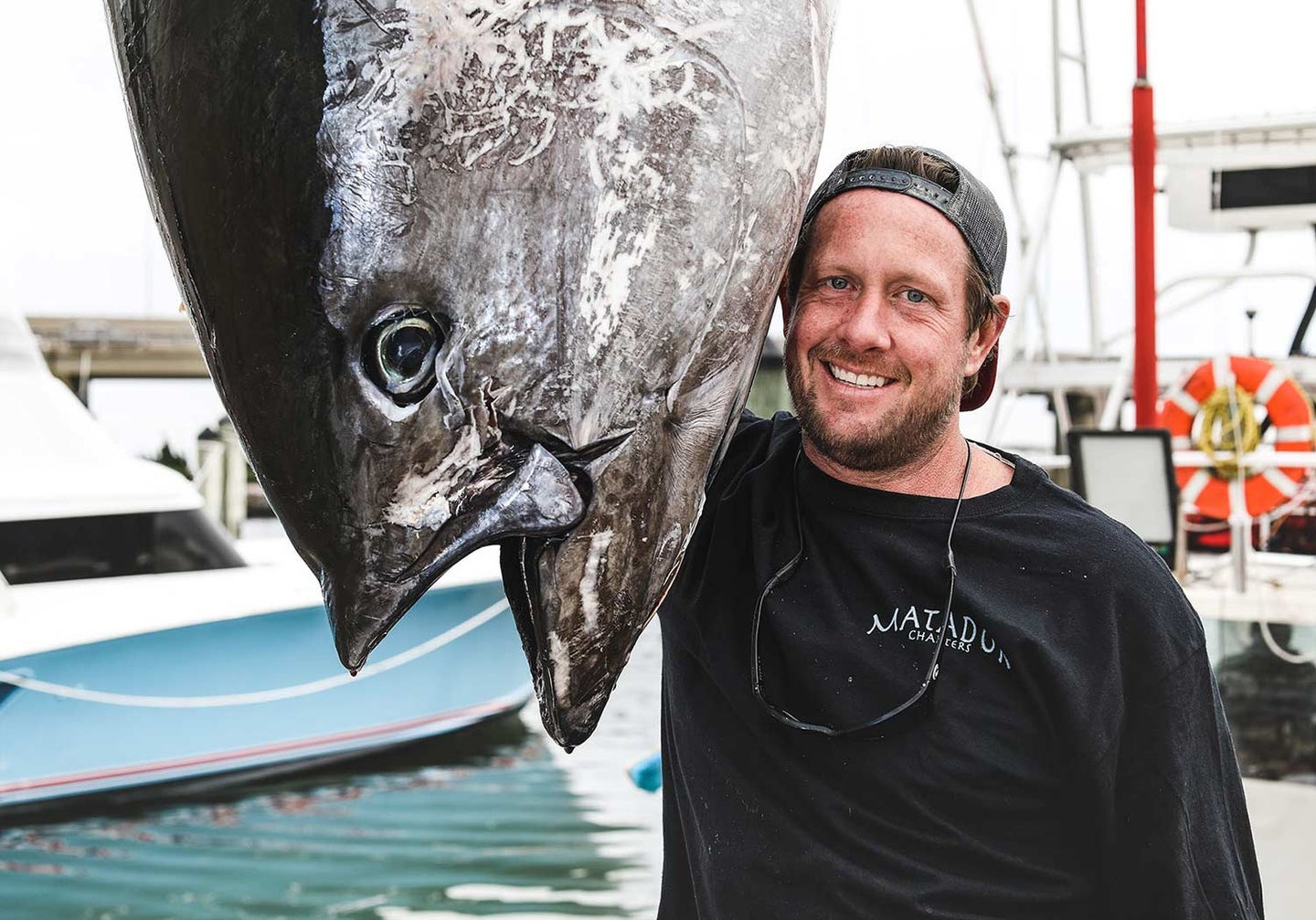 They arrived by the dozens—with coolers and plastic bags in hand. Virginia Beach Captain Jake Hiles invited them to come via social media. He’d just caught a bluefin tuna like no other—and asked the community to join in his prize. Hiles gave away the catch of a lifetime.

It was the fishing equivalent of Babe Ruth standing at the plate and pointing his bat toward the fence then smacking a home run.

Before Hiles headed out of Rudee Inlet with fellow angler Capt. Jeff Landis Saturday, February 15, he texted a handful of other friends to see if they wanted to join them.

“I’m going to set up so that I can re-set the state record in Virginia,” he texted friend, Capt. Kyle Peet.

To friend Capt. Matt Metelsky, his text was even more to the point, “I’m gonna go catch the new Virginia state record this weekend…and it would be cool if you went.” Catching big fish is hard work after all and help is always appreciated.

Hiles, who operates Matador Sport Fishing Charters, had been watching the weather and sea conditions and knew the time was right. He and Landis headed out around noon on Saturday. When they returned roughly 24 hours later, riding with them was a hulking bluefin tuna that would tip the scales at 708 pounds, shattering the standing record of 606 by 102 pounds.

The seas were rough as his 35-foot Henriques Maine Coaster plowed southeast nearly 90 miles to an area called the “tuna hole.”

“The conditions were fairly nasty with a choppy confused swell, whitecaps, and a cold northeast wind, but we arrived in the warm waters of a gulf stream eddy in the afternoon and began trolling,” Hiles recounted in a Facebook post after accomplishing the feat. It was game on almost as soon as they got there as a large bluefin quickly snatched their bait. Hiles battled the tuna for hours, getting it right up to his boat before losing it.

So, the team adjusted their tactics for night fishing and started drifting baits—they were using a mix of dead bluefish as well as rubber lures the pair makes themselves from a 3D printer. The lures, dubbed the Stinky TINKY, are made to imitate mackerel. Sharks quickly ate up the bluefish leaving the anglers with just their homemade lures. The fishing remained eventful with a 10-foot hammerhead hooked and released, as well as a bottlenose dolphin that got tangled in a line that was also safely untangled and released.

Read Next: How to Bleed and Ice Tuna Fillets for the Freshest Meat

The action wore the two out as midnight came and went, so Landis agreed to watch the lines while Hiles went below deck for some rest. At 4:17 a.m., one of the glow sticks placed on the end of the rods to make them visible in the dark dropped toward the ocean.

“We’re on,” Landis yelled as he began reeling in the other lines to get them out of the way. Hiles dashed from the cabin to find one rod bent over, line screaming from the reel, as what would be the large bluefin tuna made a mad dash for the ocean floor a mile below the Toro. However, it almost became the record that wasn’t.

As Landis reeled in the other lines, he snagged a 6-foot long, 100-pound-class Mako shark near the surface. The thrashing shark was mere feet from the taut line that tethered Hiles to his destiny.

“I’m flipping out because I know that’s a shark he has one there and I have a really, really tight line and he has a really toothy critter right beside the boat and I can see it,” says Hiles. Landis acted quickly, working the mako next to the boat and cutting him free to get it away from the fish Hiles was working.

Meanwhile, line was still stripping from Hiles reel. When he saw the hollow-core backing appear where monofilament had been, he knew he had less than 200 yards of line left on his reel. The tuna showed no signs of slowing. Hiles knew he had to do something. He set the drag almost all the way to full and with barely 100 feet of line still on his reel, the big tuna slowed and eventually turned back toward the surface. Hiles began cranking for dear life, slowly reclaiming line stolen from the tuna’s 7-minute mile-deep dash.

Hiles worked the tuna to within a short distance of the boat before it made another short dash and then gave up altogether. Fifty-three minutes after first hooking the giant bluefin, the angler had the fish alongside the Toro and a gaff in its side.

Read Next: How to Pop Tuna on the Surface

Now they had another problem. Hiles didn’t have a chainfall or ratchet strap so somehow he and Landis, both exhausted from the long night, were going to have to figure out a way to get the fish through the tuna door and onto the boat lest they have an Old Man and the Sea scenario where sharks could start removing pounds of the potential record by the mouthful. After some clever rigging and a lot of effort, two hours later, the anglers finally had the tuna safely on board and headed back to the marina.

At Rudee Inlet, the true record-setting qualities of the bluefin were revealed to a crowd of onlookers who had already gathered to catch a glimpse of the fish. Weighing in at 708 pounds, the tuna had a 77 ¼-inch girth and measured 114 inches overall in length. Ironically, Hiles was part of the crew who had caught the current state record caught by his late friend Chase Robinson on April 6, 2015. Robinson passed not long after the feat, so Hiles was glad to see the record stand for some years. But he also always hoped when the record did fall, it would be one of Robinson’s friends who broke it. He has a tattoo of a bluefin with 606 on his hand to commemorate his late friend’s achievement.

To pay his good fortune forward, once the tuna had been officially scored and certified, Hiles posted an invite to those who follow him on Facebook to come down to the marina and get a piece of the great-tasting fish. Within an hour of posting the invite, nearly 100 people, many who had heard about the opportunity second hand, showed up with small coolers and plastic baggies in hand. In less than an hour, the fish had been scraped clean.

“I had 708 pounds of tuna that is best eaten fresh and I can’t eat it all myself,” says Hiles. Recreationally caught fish cannot be sold commercially. “It’s nice to be able to share this with the community.”

After all, it isn’t everyday a person gets to taste a record-breaking fish.