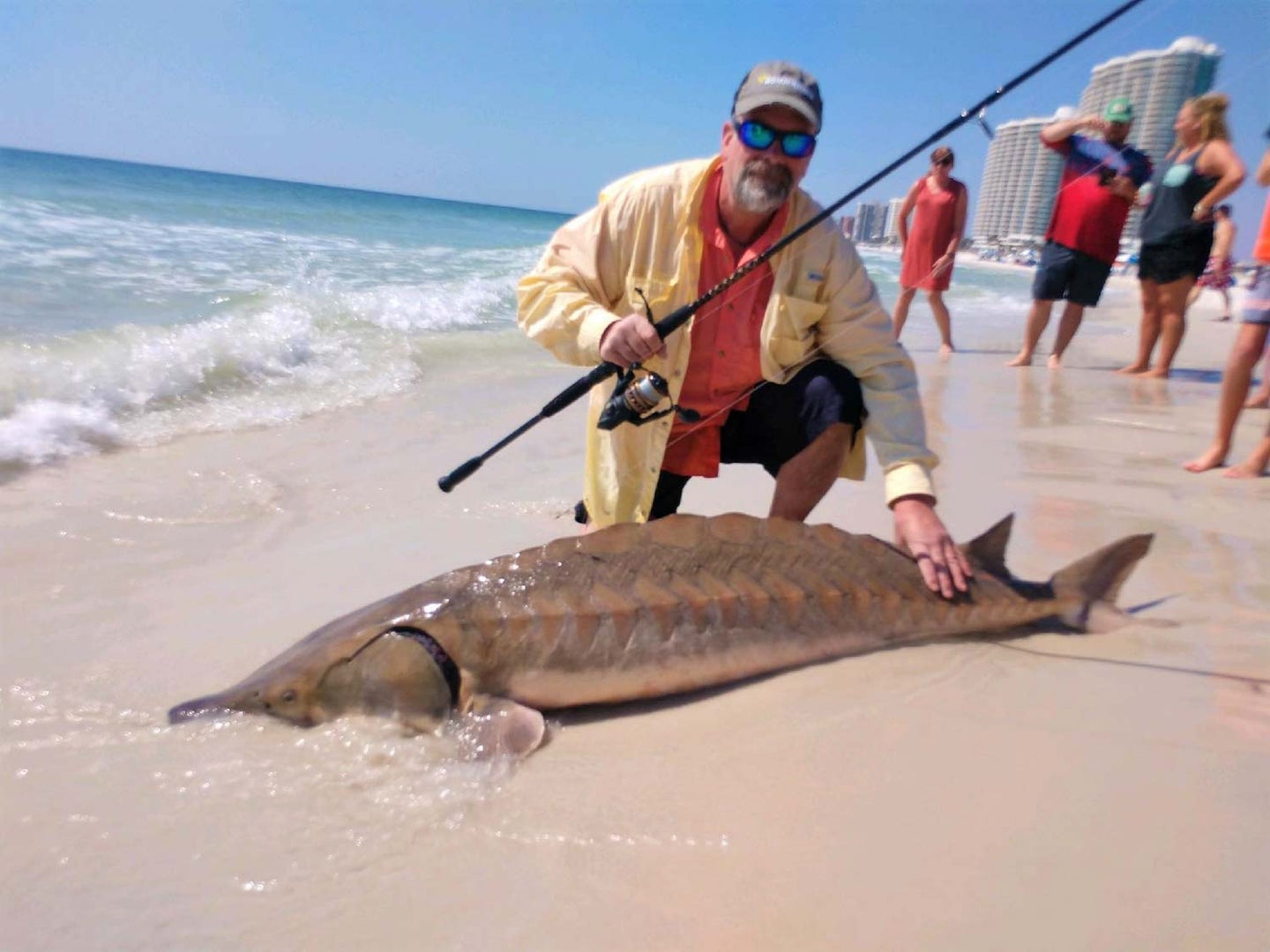 The author, David Rose, poses with one of the rarest catches on earth, a Gulf sturgeon, just moments after the catch. Carol Rose
SHARE

Saltwater surf fishing can often be like picking a grab bag from the sales bin at a Bass Pro Shop—you really never know what you’re going to get. But never in my wildest dreams would I have thought that I would land the fish of a lifetime, one that could have made the record books, no less.

Saturday, March 6, 2021, started out like most days during my late-winter getaway from my Traverse City, Michigan, residence, with a few hours of surf fishing the Gulf of Mexico from the beaches of Orange Beach, Alabama. But a normal day of catching whiting, croakers, flounder, gafftopsail catfish, and the like took a turn when one of my two rods indicated a hit. Forty minutes later, I’d beached my personal biggest catch ever—a Gulf sturgeon that is possibly the largest of the species ever taken on hook and line. No official length or girth were recorded, however, before the fish was quickly unhooked and released.

With no tape measure on hand, I spread out my arms—about 6 feet—so as to get an idea on the sturgeon’s length. The fish, from snout to tail, was well beyond my reach. I estimated the fish to be 120 to 130 pounds. I could only turn the sturgeon belly up after a large, rogue wave rolled in, giving the fish enough leeway to swing its tail and swim out with another 100 feet of line. The fish came close to spooling me twice during the battle, but I was able to regain the line each time by chasing it down the beach.

The fish ate half of a fresh shrimp wrapped with Atlas Mike’s Spawn Net and Magic Thread to keep the bait tight to the hook during the cast. The rig was a Dusty’s Pomp Rig 2/Drop with multi-colored floats with 20-pound-test Momoi Dimond monofilament and 1/0 Mustad circle hooks. The rig was held steadfast in the surf by a 4-ounce pyramid sinker. My reel was a size-5000 Penn Battle II spinner, spooled with 20-pound-test Silver Thread AN-40 monofilament.

By the time I reeled the fish in, more than 100 spectators had gathered around to see the catch. “It was like a scene from Forest Gump,” said John Semeyn, of Suttons Bay, Michigan, who was watching from the balcony of the condo unit he and his wife were renting. “You’d chase the fish to the east, and the whole crowd followed. And when the fish ran west, they were all tight on your heals.”

Before seeing the fish, I figured I had hooked some species of shark. Even when the silhouette of the fish could be seen in the waves along the first break, I thought it had to be a big toothy critter. But then its back broke the surface and there was no dorsal fin. A bystander, who obviously knew a little something about fishing, looked at me: “A sturgeon?” he said. “I didn’t know there was such a thing as a saltwater sturgeon.” I admitted I had no idea, either.

Read Next: The Beach Bum’s Guide to Surf Fishing for Sharks

When the fish finally started to tire, the passerby tried tailing it for me, but the fish was too slick. I had my wife, Carol, hand him my fishing gloves, which allowed him a firm grip. That’s when the sturgeon was able to be beached. Figuring the fish might be an endangered species, I made sure the head and gills stayed in the surf while I looked for any tags. There were none.

Afterward, I learned that the Gulf sturgeon is an anadromous fish (living in saltwater, but spawning in freshwater), which are federally protected by the Endangered Species Act. “Overall, these rare fish spawn in the freshwater rivers of the Gulf region in spring,” says Jeff Powell, assistant field supervisor, Alabama Ecological Services Field Office of the U.S. Fish and Wildlife Service. “But our studies are showing there may be a few that migrate and spawn in the fall, as well.

“The sturgeon you landed is most definitely a once-in-a-lifetime catch,” he added.