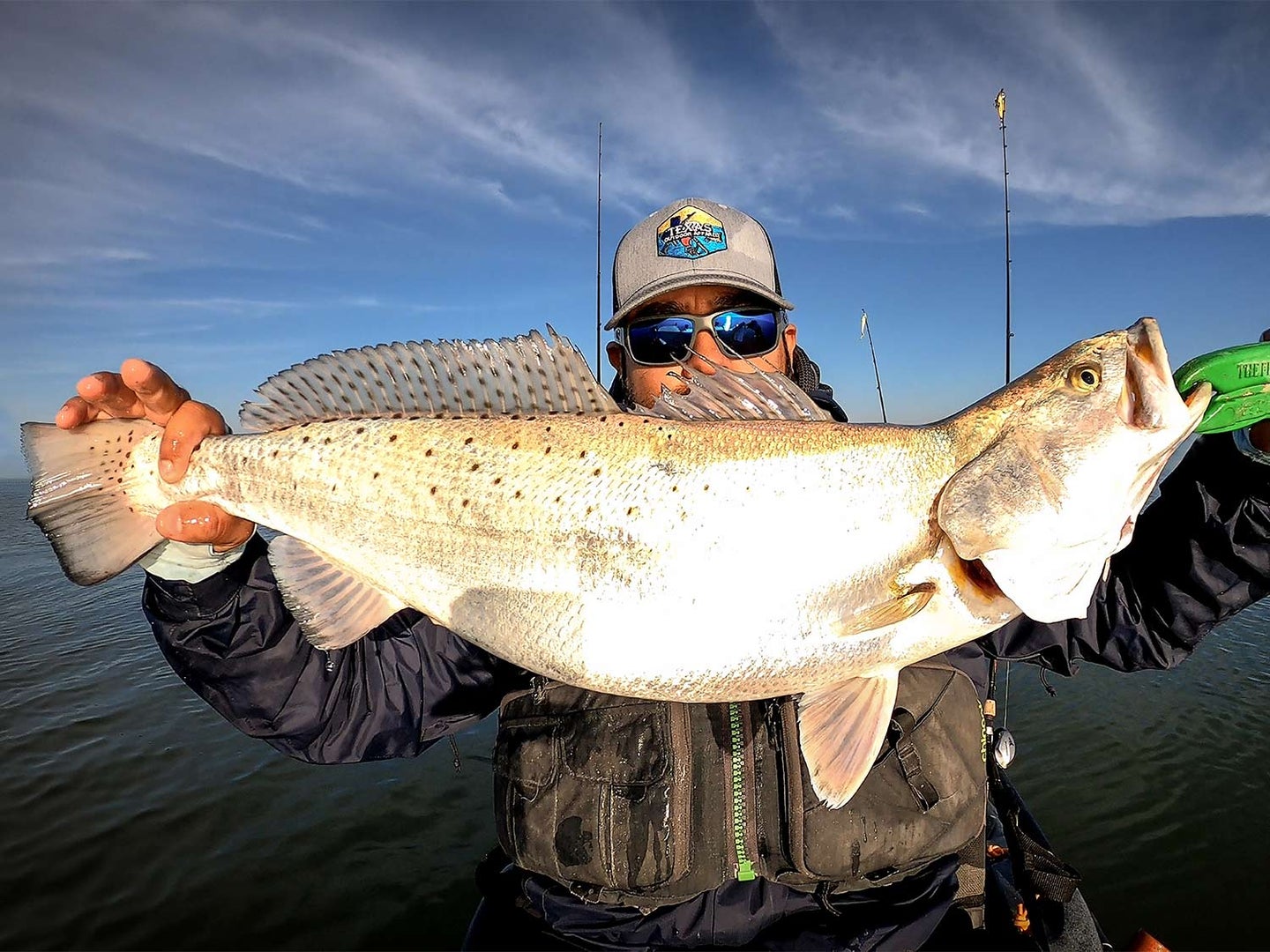 The sky is a gray blanket spread over the matching gray water of the Elizabeth River. As the sun sets, the air temperature drops to the low-40s. The river is only a few degrees warmer. I struggle to keep my body from shivering as I slowly work a twitchbait back to my kayak. But I know that fooling a cold-water speckled trout takes a super slow presentation and sensitive touch.

Twitch, twitch the rod tip, crank the reel handle, and pause. The wind cuts cold through my clothes as I hold perfectly still and count to ten. Twitch, twitch, crank, pause, count to ten. I watch the line floating slack on the surface for a sign. When I see the line move on its own, I crank fast on the reel and lift hard with the rod. My strike is met with a solid pull from a hefty speckled trout. It’s mid-winter and I’m hooked into one of my biggest trout of the year.

With historically high average water temperatures and an unprecedented population of speckled trout, anglers across the country are fishing all winter. Here’s how you can get in on the action.

1. Troll With a Kayak to Find Speckled Trout in the Winter

Mike Sabadic is a kayak fishing guide who focuses on trout fishing along North Carolina’s Outer Banks. “Using a slow retrieve, I can extend my trout season from November through the beginning of March,” he says.

In the cold months, Sabadic looks for trout in deeper holes and channels where the fish find slightly warmer water. “I can catch trout in 50-degree water down to the upper 30s,” he says.

To search for trout, Sabadic slow trolls a four-inch, soft plastic paddletail on a ⅛- to ¾-ounce jighead. He says, “If the wind is blowing or I move into deeper water, I will increase the weight of the jig.” Color choice depends on water conditions. In clear water, he uses natural colors but after dark or in dirty water Sabadic goes with all white.

In the winter, Sabadic works water that is over six feet deep. He trolls less than two miles-per-hour with the lure at 20 to 30 yards behind the boat. “I go just fast enough to keep the lure off the bottom,” he says.

Sabadic says, “Trolling allows me to find fish and determine how well they are biting.” If he marks trout on his fishfinder but doesn’t get bites, he will stop trolling and switch to casting a straight tail finesse soft plastic on a ⅛- to 1/16-ounce jighead. He prefers the light jighead to allow the lure to drop slowly through the water. “The lure can take five seconds or more to hit bottom,” he says. Sabadic says the buoyant soft plastic sticks up from the bottom to entice slow-moving seatrout.

2. Entice a Speckled Trout With Small Baits and Light Tackle

The western shore of Pamlico Sound and the mouth of the Neuse River is the historic wintering grounds for North Carolina speckled trout. In recent years, local guide Captain Gary Dubiel has noticed a significant change in the fish’s behavior. “We used to catch trout farther up the rivers, but after so much rain and warm weather, we’re finding fish 30 miles east.”

Dubiel says winter trout are now holding in open bays and deep holes in tidal creeks. As weather patterns change, the wintering grounds for speckled trout also change. “Everyone looks for the deep hole,” he says. Dubiel suggests searching for trout along the edge leading into a hole. “The fish will set up waiting to ambush bait,” he explains.

With the boat holding on the deep side of the drop, Dubiel casts into the shallows and works the lure slowly down the slope. He suspects the trout hold in the deeper water looking for a baitfish to wash over the edge.

Read Next: Which Trout Species Is Most Beautiful?

For cold-water trout, Dubiel prefers soft plastics. When the temperature drops, speckled trout focus on smaller baits. “I heard it is easier for trout to digest a smaller meal in cold water,” he says, pointing out he has caught trophy trout on small soft plastics.

When he’s picking out a lure, Dubiel looks for a jig or swimbait that sinks slowly. He fishes a ⅙-ounce jig head with a three-inch soft plastic. One of his favorite lures is a Storm 360 GT Shrimp. “It’s keel weighted so it falls slowly through the water.”

Light lures require sensitive tackle. Dubiel goes with a 1000-class spinning reel on a six-foot, nine-inch rod. He spools the reel with ultra-thin eight-pound braid and adds 24-inches of 15-pound fluorocarbon. Dubiel prefers high-vis line so he can watch the line for the slightest tap on the lure. He says, “When I see the line move, I set the hook.”

3. Use a Popping Cork to Find Speckled Trout

In the shallow bays and marsh creeks of South Carolina’s lowlands, spotted sea trout bite all winter long. Charlestown local Captain Jordan Pate has been chasing trout for as long as he can remember, and he’s been sharing his skills and experience with clients as a guide since 2010.

For winter trout, Pate says his favorite days are bluebird clear and calm. “High pressure seems to push the fish deeper,” Pate has noticed. He looks for trout in four to 10 feet of water. “Anything deeper than 10 feet and it’s hard to fish for trout,” he says.

Pate says once the water drops below 48 degrees, the trout’s behavior changes. “To find trout, first I look for the warmest water.” He will motor around a promising area watching his fishfinder for the water temperature to rise. He says he often finds warmer water around the inlet or the mouth of a creek. As the tide ebbs, warm water drains out of the shallows and rushes out of the creek. “Trout like to be near deeper water,” Pate adds, saying he rarely finds them up a creek or on a shallow flat. He says the fish will hang in warmer water looking for a meal. “Some days I’ll drive around for 30 minutes looking for warmer water.”

To catch winter trout, Pate goes with a light ¼-ounce jighead and soft plastic. “In cold water, I like a softplastic with a lot of action,” he says. A curly tail jig or Z-man Trout Trick will get the fish’s attention.

“I position the boat so I can cast into the current at a 45-degree angle from the bank,” he says. This strategy allows him to cover a range of depths as the lure bounces away from the bank.

To really fire up the trout, Pate employs a popping cork. “When the water gets really cold, we go into search mode,” he says. The popping cork allows him to attract fish from a large area. His rig starts with a cup-faced cork. He explains, “The cup-faced cork makes more noise but moves more slowly.” This allows Pate to make a pop and let the rig rest, waiting for a trout to find it.

Below the cork, he runs a three-foot length of 20-pound fluorocarbon leader and a shrimp imitation or a curly-tail grub. “If the fish are finicky, I’ll go down to 12-pound fluorocarbon,” he says. Pate then pinches a split shot to the leader a few inches above the lure to give his cast a few extra feet. “If the wind is blowing and the surface is a little rough, I can deadstick the popping cork.” He casts out the cork and lure, then sticks the rod in a rod holder.

Once he finds the fish with the popping cork, Pate will switch over to the jig and soft plastic. Color choice runs the gambit from white to Arkansas glow, opening night, or dark red. “Sometimes I have to throw a handful of noodles against the wall and hope something sticks,” he says.

“I start with an understanding of the moon phase and air pressure,” he says. On the full moon, big trout will feed all night. Castro gets his best bites from midnight until dawn. “The best conditions follow a cold front,” he says. Within 24 hours of the front, as the wind calms, Castro says the fish get fired up.

Castro likes to find a shoreline with tons of structure. “I look for aggressive contouring like shallow shorelines that drop off quickly to grass or hard bottom.” In addition to structure, the trout like moving water. “We don’t have a lot of current, so I like wind and rough water to move the bait.”

Castro relies on two lures for cold-water speckled trout. He says, “One is easy to guess and the other one is less obvious.” Like many South Texas sharpies, Castro loves his soft-body twitch bait. He says, “When a Paul Brown Corky descends, it wobbles and flutters with internal beads that aren’t too loud.” He claims the soft body lure has a natural presentation that doesn’t require the angler to do anything but let it sink.

Read Next: Trout of the World

To work a twitchbait, give the lure a hard twitch with the rod tip, retrieve line, then let it sink. The fish will often hit as the bait suspends and slowly sinks through the water. By counting down between twitches, the angler can control how deep the lure sinks. In cold water, both bait and predators are loth to expend energy. For the trout, a twitchbait looks like a cold-stunned meal too easy to pass up.

Castros secret lure is a soft-plastic paddle tail on a 3/16-ounce jighead. “A paddletail is unorthodox for winter fishing, but paired with the light jig head it has the slow sink rate that drives speckled trout to ambush,” he says. Castro favors dark, earthy colors with a flash of glitter.

Speckled trout are famous for a light bite and a paper-thin mouth. “Choosing the right tackle is everything,” he says. Castro likes a medium-fast action rod, “with a little whip,” he says. To reduce fatigue while casting all day, Castro likes a baitcasting rod. To detect the lightest bite, he relies on eight-pound braided line with a 3-foot section of 20-pound fluorocarbon for improved sensitivity and a slower sink rate.

For anglers with patience and persistence, speckled trout offer a challenging target in winter. While there are fewer fish, the remaining trout are concentrated in deeper water. The cold temperatures slow down their metabolism, but it doesn’t turn off their appetite. Once you find a pattern that produces, return under the same conditions and catch speckled trout all winter long.

Following in his father's footsteps as an outdoor writer, Ric Burnley had big shoes to fill. After his dad, Eric, gave Ric his first job contributing a weekly fishing report to The Fisherman Magazine, the younger Burnley took to the profession of story-making and storytelling. Over the past two decades, Ric Burnley has entertained and educated the readers of Field & Stream, Outdoor Life, Salt Water Sportsman, Sport Fishing, and other major outdoor magazines.