10 Things to Know Before Your First Season of Flyfishing

If you’re about to embark on your first year of flyfishing, here are some lessons you can avoid learning the hard way 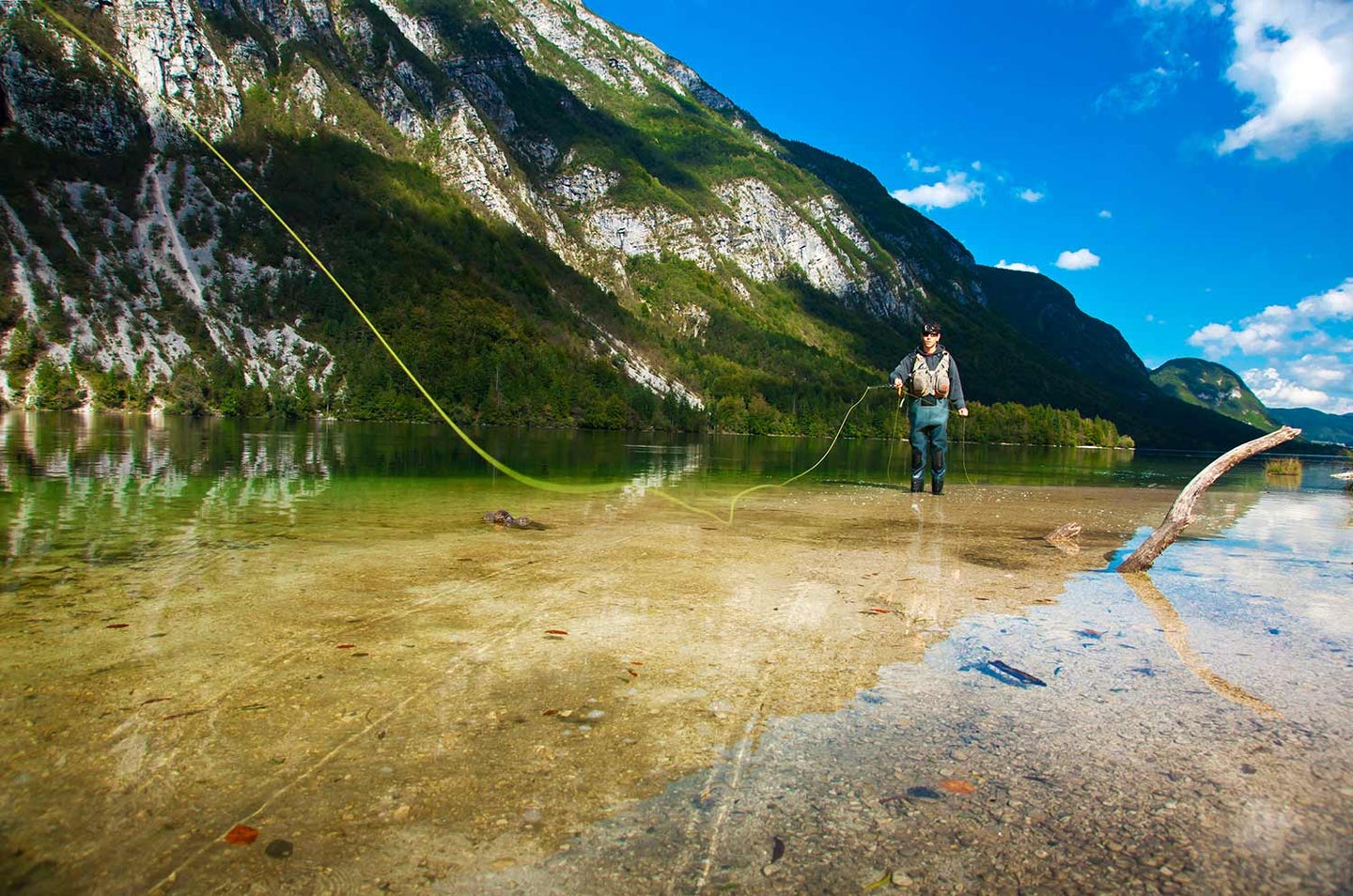 Use a lighter touch to improve your cast. fotovincek via Deposit Photos
SHARE

You’ve seen them standing in the river, casting to and fro, and wondered what the fuss is about. You’ve seen your friends’ obsession. You’ve reckoned that a decent trout would put up an exciting fight on that light tackle. So here you are, at the dawn of your first season of flyfishing.

As you’ll soon see, there’s a fair amount going on. Much about flyfishing will be unlike the fishing you’ve done before, and it can be a little bewildering at first. But it’s also a hoot, and chances are you will enjoy it enough to come back for more. Here are a few things you’ll experience in that first season.

You spot a rising trout at the outside edge of your casting range. You apply more force to reach it, but the line plops down in a bunch of S-curves well short of the target. The fish is still rising, so you try again, with the same result. Your excitement now mixes with frustration and your muscles are tense. You’re in a cycle that ends with an un-caught trout calmly digesting its snack.

It’s natural to think that casting longer requires you to cast harder, but it’s wrong. If you try to muscle a fly line, it usually ends up collapsing. Experts say using too much force is the number-one casting flaw, and believe me, it’s not limited to first-year fly fishers. Do this: Stop casting for a few minutes. Breathe and let the tension ebb. When you resume, make it your top priority to have a light touch—crisp, but light. You’ll be surprised at how much your casting improves.

2. What the Water Temperature, Speed, and Depth Mean for Flyfishing

If you visit your charming local brook after a night of thunderstorms, you will see how quickly weather can affect trout habitat. Generally speaking, flyfishing for trout is much more enjoyable and effective when the stream is in “normal” condition—that is, not “blown out” by heavy rain, warm and shallow from summer heat, or frigid from winter cold.

You can save yourself some disappointment and gas money by seeing what shape the water is in before you go. Find a local fly shop and see if they post reports on stream conditions, or check the U.S. Geological Survey’s Current Water Data for the Nation page, which lists real-time flows and, for some streams, water temperature. If your trout stream is too warm to fish, go fish for bass, preferably smallmouth. You may find you prefer bass to trout, even if you don’t want to admit it to yourself.

3. Why You Have to Stand in the Water

There are many situations where spinning-rod anglers pull on waders and walk into the water, but they don’t always need to. They can cast far enough to reach the spots likely to hold fish, and they don’t require room for a back cast. But the new fly fisher will quickly realize why he or she needs to be standing out in the stream: It’s often necessary to get physically closer to places in the stream where fish live, and you usually have to throw the line behind you before you can throw it in front of you.

The need to wade is actually one of the nice things about flyfishing. Joining the trout in their environment is both challenging and fun. Taking even a few steps into the stream opens up lots of room for your back cast, and getting closer to the fish is a strategic advantage, because the less line lying on the water between angler and fly, the better. By the way, don’t immediately wade in up to your rib cage so you can reach deeper water. You might be surprised how many trout hang close to the shore. Fish the near water first, then wade deeper.

The chalkboard at the fly shop said size 14 flies were hatching, so you tied on a size 14 fly, but the trout ignored it. They took natural flies all around it, maybe even right next to it, but your size 14 didn’t fool them. A size 16 might have. It’s not that the fly shop was wrong; gauging fly size by hook dimensions is a fairly imprecise way estimate. Sometimes, for reasons only the fish understand, a fly that’s a couple millimeters too big is unacceptable. Down-size a bit and your luck may well improve.

One rule of thumb says size, shape, and color, in that order, are the key characteristics of flies, so if the right pattern isn’t working, going smaller should be your first adjustment. And don’t think trout won’t see a smaller fly. Many are caught every season on nymphs the size of sesame seeds.

5. Your Fly Needs to Float Naturally

Getting a good drift can be surprisingly tricky. You know the basic strategy: Drop the fly upstream of where the fish is feeding and let it drift downstream to the trout, just like the naturals are doing. The naturals, of course, aren’t tied to a 9-foot leader and however many feet of PVC fly line. That leader and, especially, that line often cause the fly to get yanked off course, because they’re lying on water that’s not flowing at the same rate as the water where your fly is floating. The drag can be so subtle that you can’t even see it, but still bad enough that your fly moves unnaturally and the fish isn’t fooled.

There are lots of ways to deal with drag. You can find a casting angle where the intervening current doesn’t pull the line so much. You can make casts, like the reach cast, that have some built-in slack. The simplest thing to do is get closer to the fish, so there’s less line on the water. Stay downstream of the trout so you won’t be seen.

6. What Time You Go Fishing Is Everything

You may find yourself on a well-known stream in mid-afternoon on a sunny day and wonder what all the fuss is about. There are no mayflies or caddisflies on the water or in the air, no splashing from surface-feeding trout, no evidence whatsoever that the water holds fish. Come back that same evening and you’ll think you’re in a different place, with insects everywhere and fish rising like crazy.

Broad-daylight fishing is by no means a waste of time, and depending on the location, the season and the insect activity, can be very productive indeed. But as a rule, you’ll have better action at dawn and dusk. Not only will you have more fish and insect activity, but you’ll also avoid conflicts with daytime river users like tubers and canoeists. In the summer, the water is coolest at dawn, which usually makes for livelier fish.

Read Next: The Ultimate Guide to flyfishing for Carp

If you’re like me, your first attempts at fly casting didn’t go smoothly. My backcasts smacked the water, my forward casts landed like spaghetti, and sometimes I ended up with line wrapped around myself. I never snapped a rod over my knee in frustration, but I wanted to a few times.

Casting a fly line is fundamentally different than casting with a spinning or bait-casting rod. Unlike those, a fly rod is designed to throw the line, not the lure or bait. Reading up and watching videos will help, but the best way to shorten your learning curve is to be taught by a good caster and teacher. Local chapters of Trout Unlimited and the Federation of Fly Fishers regularly offer classes for modest fees. Fly shops often hold classes and clinics, too. It’s worth taking the trouble.

Most of us start out with relatively inexpensive gear, for the same reason a guitar student won’t show up for his or her first lesson with a $6,000 Les Paul. Happily, today’s lower- and mid-priced fly rods and reels are darned good, and besides, it’s how you use the rod that counts.

Still, if you get a chance to make a few casts with a high-end Sage, Orvis, or Winston, you’ll notice a difference. They’re lighter, they’re easier to control for accurate casting, and they effortlessly lay out nice long casts. Not everyone can plunk down $1,500 for a rod, reel, and line, but if it feels like flyfishing is something you will do a lot of in the years to come, do get the best gear you can afford.

9. You Really Do Need Waders

Sure, standing bare-legged in a cool stream on a hot summer day sounds nice. It even makes sense on tiny, high-elevation brook trout streams. But in most places, most of the time, you need to be wearing waders. Reason One: trout live in cold water. There’s only so much time one can comfortably spend “wet wading” in a 58-degree stream. (Feel free to disregard if your first season of flyfishing takes place on a bonefish flat in the tropics.) Reason Two: Waders have soles designed for underwater use, made of either felt or “sticky” rubber like Vibram. Walking in regular sneakers on slippery underwater rocks is flat-out dangerous.

Chest waders also serve as another thermal layer when fishing in cold weather. Hip waders are cheaper, cooler, and less bulky in transit, but I guarantee you’ll get your crotch wet somehow, no matter how careful you are. Waist-high wading pants are a nice compromise. Stocking-foot waders have booties and are used with separate wading boots; they offer great support. Boot-foot waders have rubber boots built in; they’re warmer and easier to put on and take off.

Read Next: Learning to Fly Cast from an Angling Icon

The fact trout they eat floating flies is one of the reasons they’re so much fun to fish for, but they don’t do it all the time. They feed at the surface when flies are hatching, but the rest of the time they feed below, usually close to the bottom. No rises doesn’t mean no fish—it just means you need to use a different tactic.

Exploring the stream-bed landscape with a nymph or a streamer is a great way to catch trout, and it sure beats starting at a blank pool, waiting for a rise. It often yields bigger fish—the old guys that are too lazy to dash around at the surface. Nymphing requires concentration, watching, and feeling for a clue that an unseen fish has taken your fly (a strike indicator can be a big help.) Just like with a dry fly on the surface, your goal is a natural drift, at the appropriate depth.

Of course there’s more. Flies, knots, trout behavior, bug biology, rules, and regulations—like any interesting hobby, flyfishing comes with plenty to learn. But that’s part of the fun. Your first season will teach you many lessons, and so will the ones to come.