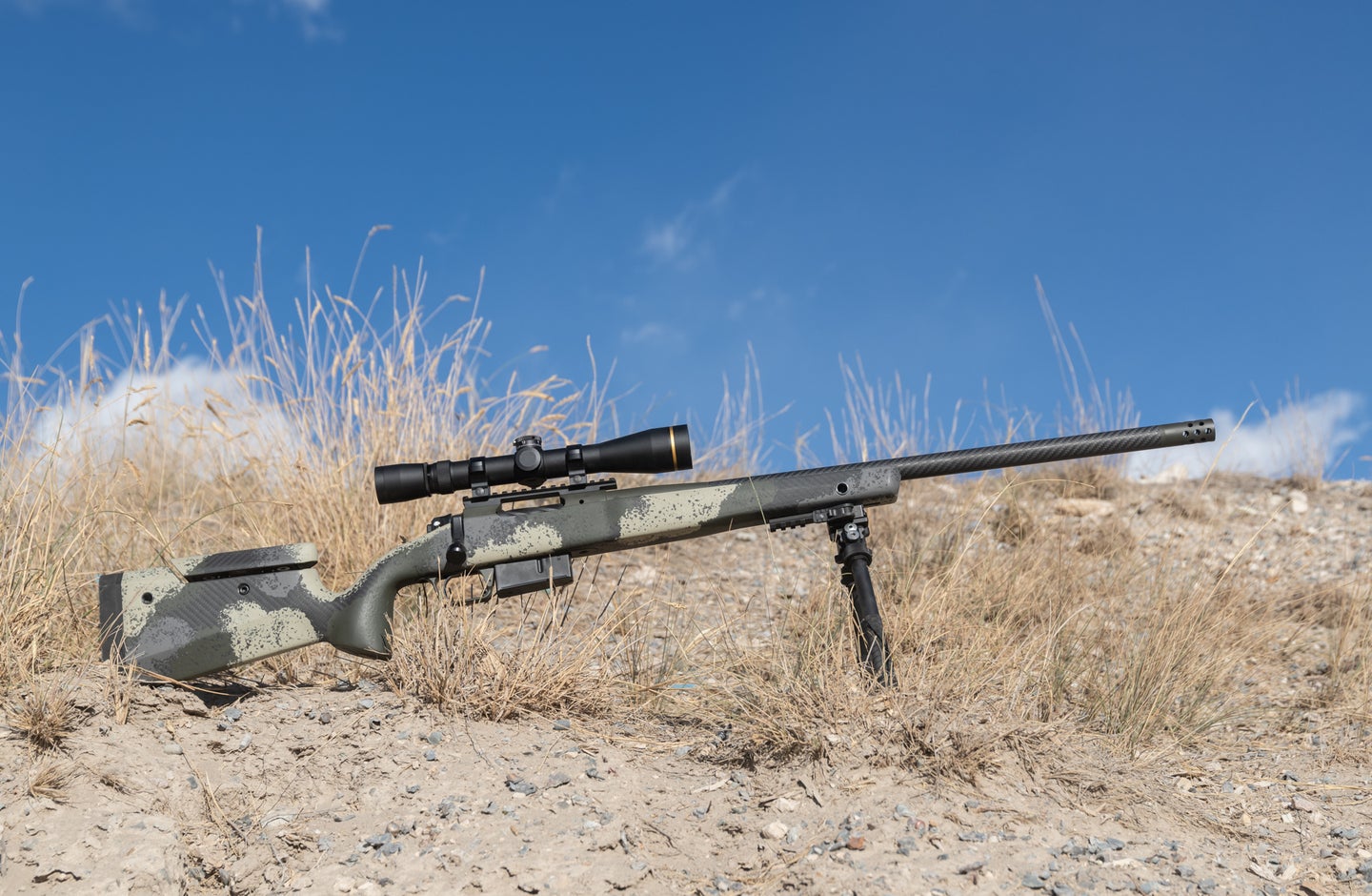 Here’s a bit of good news in an otherwise apocalyptic 2020: Springfield Armory has expanded into a new product category with the introduction of a bolt-action rifle. The official name is the Springfield Armory Model 2020 Waypoint and I’ve been among the fortunate few who’ve been able to get an early look at it.

Normally, when a gun company ventures into a new arena, people tend to get pretty excited. But I’ll confess I have the opposite reaction. I’ve seen so many of these efforts marred by one mistake or another that these announcements usually leave me with a sinking feeling in the pit of my stomach whenever a company strays out of its comfort zone. To pull one example out of the air, look at what happened when Smith & Wesson trotted out a line of shotguns, or the unfortunate and ill-fated i-Bolt.

To SA’s credit, however, they got this introduction right with a smartly configured rifle that lives up to the significant performance standard they are touting.

The Waypoint is a hunting rifle with a lot of elements pulled from the tactical world. With just a glance at its profile, it’s easy to see the that the stock, action, and barrel all draw heavily upon firearms designed for the military, law enforcement, and competition.

The model I have here is a 6.5 PRC with the carbon-fiber barrel and the adjustable stock. That’s the flagship configuration, which carries an MSRP of $2,399. With the fixed stock and carbon-fiber barrel the price is $2,275, and the steel-barreled rifle with the adjustable stock is $1,825, while the steel version with the fixed stock lists for $1,699. It’s safe to assume the real-world prices will be about $100 to $200 lower than the MSRPs.

Springfield Armory guarantees 3-shot accuracy of .75-MOA with the Waypoint. My first 5-shot group out of the rifle with factory Hornady 143-grain ELD-X bullets measured just under this, and subsequent groups did just as well, so that is a strong indication that SA is building these guns the right way. Good accuracy is the result of all the rifle’s components working in concert, so in no particular order here’s a look at the bits and pieces that make up the Waypoint.

The carbon-fiber stock is from AG Composites, a veteran-owned company based out of Alabama. This stock is a good example of the modern tactical hunter. It has a vertical pistol grip with a comfortable hand-filling contour that functions well ambidextrously in case you are a lefty or need to shoot off your weak-side. The grip positions the hand well with respect to the rifle’s trigger. The trigger itself is also worth noting. It’s an adjustable model from TriggerTech, which has established itself as one of the best triggers out there for hunting and competition. The trigger on my sample broke at a consistent 3 pounds 11 ounces.

One of the stock’s virtues is the clean lines and the flat surfaces on the underside of the butt and along the fore-end. This snag-free design rides shooting bags well at the range and makes the rifle easy to maneuver when setting up for a shot in the field. In lieu of swivel studs the Waypoint instead has five QD cups for attaching a sling. Three are on the butt—one on each side and one along the bottom—and two are on either side of the fore-end. The extra cups on the butt also allow you to attach a lightweight rear bag. I’ll often carry one on my hunting rifles and just let it hang there until I need it to help support a shot. Weibad makes a nice one that weighs next to nothing.

The stock has three M-Lok compatible slots along the front portion of the fore-end so that you can attach a length of Picatinny rail, a segment of ARCA rail or other connector in order to attach bipods and other accessories.

The cheek piece adjusts up and down and side to side for a custom fit via an Allen-head wrench. This hardware is nice, but if you’re really interested in shaving weight, go with the fixed stock version with the carbon-fiber barrel. My rifle, which is topped with a Leupold VX-3i 4.5-14×40, weighs 9 pounds with an empty magazine. With the fixed stock this rig would tip the scales at 8 ¼ pounds, which makes it a viable option for serious mountain hunting.

The stock has a four-tone splatter camo finish that is tastefully done and the butt is topped with a 1-inch Decelrator recoil pad. The camo finish offers a bit of grip, but the stock would certainly benefit from more aggressive texturing to make for surer handling in wet and slippery conditions.

The barrel is made by BSF, which employs an interesting technique in their manufacturing process. As with most carbon-fiber barrels, they start with a steel blank and machine it down. But instead of wrapping resin-coated carbon fiber directly around the blank, they create a carbon-fiber sleeve that slides over the barrel. The sleeve only has minimal contact with the steel, creating a cushion of air that the company says aids in heat dissipation. It’s also worth noting that the steel barrel is deeply fluted, which also helps the system shed heat. The steel barrel is secured in the tube by suspending it under tension at both ends. This is a technique that has been used by other high-end barrel makers before with great success.

The barrel is threaded 5/8-24 at the muzzle and comes with a radial brake that does a good job tamping down felt recoil. The barrel is 24-inches long, not including the brake, which adds another inch-and-a-half or so to the rifle’s 45-inch overall length.

Springfield Armory didn’t do anything fancy with respect to the design of the Model 2020 action, which is a good thing. Instead, they stuck with the proven formula of going with a two-lug system on a Remington 700 footprint that is fed by a detachable-box AICS magazine.

The bolt head incorporates a plunger style ejector and a sliding claw extractor, similar to what you’ll see on Savage Arms’ rifles. So far, I’ve had zero issues with the ammo feeding, extracting, and ejecting.

A couple nice elements that Springfield incorporated into the bolt are tool-less takedown and dual-cocking lugs. To remove the bolt from the action you have to pull the adjustable check piece off the stock and then engage the low-profile bolt-release lever on the left side of the receiver. I haven’t held a fixed-stock version of the rifle, but I presume there’s a slot cut into the comb to allow the bolt to travel far enough to the rear in order to slide clear of the receiver.

To take the bolt apart, you grasp the bolt body in one hand, and with the other hand push down on the flanges on either side of the bolt shroud, compressing the firing pin spring and then rotating the shroud to free the firing pin assembly from the bolt body. You reverse the process to reassemble. It takes a time or two to master the technique, but once you have it down, it’s fast and intuitive.

In case you missed this minor detail, you’ll want to carry the appropriately-sized Allen-head wrench with the rifle at all times in order to be able to service the adjustable-stock model in the field.

With the firing pin assembly removed from the bolt body you can see the dual cocking lugs on the action and corresponding cocking ramps on the bolt body. This helps the action cycle smoother when lifting the bolt after firing a shot by dividing the mechanical work required to cock the action over the surfaces of the two ramps instead of just one.

The bolt body is fluted and nitride coated, helping to improve corrosion resistance and reduce friction so that the bolt rides more smoothly in the receiver.

To improve the rigidity of the action, the Model 2020 is machined with an integral recoil lug. The included Picatinny rail is also machined two lugs that slip into recesses on the receiver to join it more securely to the action.

The action is secured to the stock via two stout T-30 Torx fasteners. The stock incorporates two aluminum pillars and is inletted very nicely, though it doesn’t have (or seem to need) any additional bedding.

The one-piece bottom metal on the stock is very high quality, incorporating the box for the magazine and a magazine release lever that’s actuated from the inside of the trigger guard.

For any rifle to perform at a high level, all the components must be up to snuff and work in harmony with each other. The Springfield Armory Waypoint hits the mark in this respect.

This is a solid introduction for a company that has been on a tear of late with winners like the Hellcat pistol and Saint AR-pistol. My work with the rifle to date has been limited to the shooting range, but I plan to carry it afield this fall in an environment for which it seems to be ideally suited—the West, where long shots, unforgiving terrain, harsh weather, and buffeting winds are the norm. Based on what I’ve seen, I think the Waypoint will handle it all in stride.