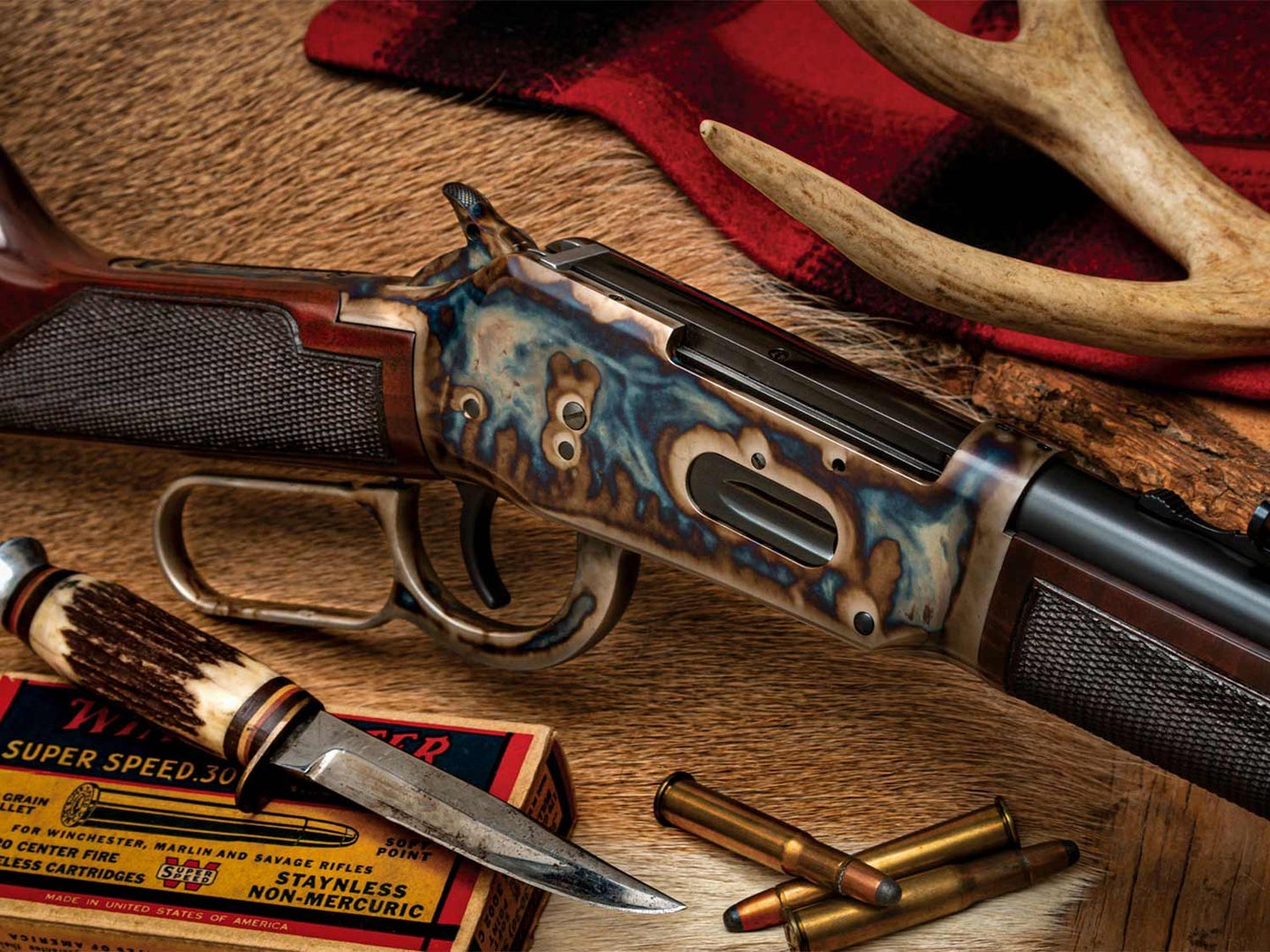 The 10 Best Lever-Action Cartridges of all Time

From the late 19th century to today, these are the best lever-action cartridges ever made

There’s no rifle that’s more American than the lever-action. From the Civil War forward, it has represented a pioneering and cowboy spirit, and it is recognized around the globe as an iconic American firearm. Though largely viewed today as an old-timer’s rifle, with limited reach and power, lever guns remain the choice of many discerning hunters who understand the importance of an easy-carrying, fast-handling, fast-shooting rifle.

Since the mid-1800s, there have been dozens of rifle and revolver cartridges chambered for lever-action rifles. Most have come and gone without much fanfare, but a handful changed the game. Some of the oldest, like the nearly 150-year-old .45/70, are still widely used today, while some of the most recent and effective are now all but forgotten.

Here’s a look at the 10 best lever-gun rifle cartridges of all time. We’re not talking about cartridges suitable for drop-box or rotary-magazine lever guns like the Savage 99 and Browning BLR. These are the best cartridges compatible with traditionally styled, tube-fed, lever-action rifles.

Why it Made the Cut: Originally developed for the Trapdoor Springfield and even used in some military Gatling guns, the .45/70 is arguably the cartridge that best represents America. Though it was popularized in the 1800s, it’s still relevant today.

Sure, the .30/06 is a patriotic favorite, but the .45/70 has been around a lot longer and is amazingly versatile. With ammunition mimicking the original loading, it’s a great deer cartridge, especially now in states allowing straight-wall cartridges for deer. With second-level loads, it will get the job done on any non-dangerous game anywhere in the world. And with the heaviest .45/70 loads, you have enough gun for anything walking planet Earth. In 1881, Marlin was the first to chamber the .45/70 in a lever action rifle, and though it experienced a brief period of uninterest, it is more popular today than ever before.

Why it Made the Cut: When most people think of a lever-gun, they think of a .30-30. It’s been a deer-camp favorite for over 125 years. Though the .30-30 may not be as fast or powerful as some modern rifle rounds, it’s probably put more venison on the table than any other deer cartridge out there.

Of all of America’s most beloved rifle cartridges, the .30-30 Winchester is the only one that doesn’t have a military heritage. It’s also the cartridge most often thought of in conjunction with the lever-action rifle. By modern standards, it is an anemic antique, but those who have used it know it can get the job done on everything from whitetail deer to moose. At about the time the .30-30 Winchester became 100 years old, ballistic engineers began to create incredibly good hunting bullets. And today, with bullets like the Hornady FTX, Barnes Triple Shock, and the Federal Fusion, the .30-30 is capable of things never before thought possible. The lever-action .30-30 fits right in with baseball and apple pie.

Why it Made the Cut: The .32 Winchester Special was introduced for Winchester’s 1894 lever-action rifle. But the popularity of the .30-30 prevented widespread acceptance of the cartridge. Still, many hunters who have used the .32 Special prefer it to the .30-30.

unlike the older .32-20 Winchester and popular .32-caliber handgun cartridges of that time, the 32 Winchester Special fires a bullet with a 0.321 as opposed to a 0.312 diameter. Though early on it was moderately popular with hunters, a limited selection of 0.321 caliber bullets and the already established and trusted popularity of the .30-30 Winchester hampered major acceptance of the cartridge. Still, there were a lot of rifles chambered for the .32 Winchester Special by Winchester and Marlin, and many of those who have used it swear it hits harder and is more lethal than the older .30-30.

Why it Made the Cut: Originally a cartridge made for a semi-automatic rifle, the .35 Remington became a favorite among Marlin lever-gun shooters. The .35 Remington has a heavy hard-hitting bullet.

Designed specifically for, and originally introduced in, Remington’s Model 8 semi-automatic rifle, the 35 Remington found it’s true fame in a Marlin lever action rifle. For those who prowl the deep timber, most consider it a superior cartridge to the 30-30 Winchester. Though that’s debatable, it’s hard not to appreciate a 200-grain, .358-caliber bullet, with a muzzle velocity of more than 2000 fps. Currently, there are no rifles being manufactured in this chambering and with Ruger’s acquisition of Marlin, it’s unknown if there ever will be again. However, don’t expect those who own a 35 Remington to be giving them up anytime soon; many consider it one of the best brush cartridges of all time.

Why it Made the Cut: The .348 Winchester isn’t the most popular big-bore lever-action cartridge, but many feel that it’s the best there is. With a 150-grain bullet, it can shoot nearly 3000 feet per second.

Specifically developed for the Winchester model 71 lever action rifle, the .348 Winchester will push a 150-grain bullet to almost 2900 fps and a 200-grain bullet to 2500 fps. That’s straight-up 30-06 performance from a lever action rifle. Hunters noticed this and the 348 Winchester was a sensation up until after World War II. It is often referenced as the finest big-bore lever-action cartridge of all time. With its short-magnum-like proportions, if the .348 Winchester was re-introduced today in a quality lever-gun it would likely become a big hit. However, the cartridge is quickly and silently slipping into extinction and in another decade may be all but forgotten.

Why it Made the Cut: This stretched-out 44 Magnum was made to fill the void of the .45/70. It’s quickly becoming a favorite of hunters in states that only allow straight-walled cartridge rifles.

Since it uses the same 0.429-inch bullet diameter as the 44 Magnum, this cartridge could be considered a 44 Magnum, Magnum. It was introduced in the mid-1960s during a slump in the popularity of the .45/70, and while not its equal, it is a fantastic big-bore lever gun cartridge that is now gaining new-found appreciation in states allowing straight-wall cartridges for deer hunting. The 444 Marlin proved to be an immediate success and found favor with those who hunted, deer, elk, and bear in the timber. In 2020, prior to Marlin’s acquisition by Ruger, Marlin offered their exquisite-looking 150-year anniversary rifle chambered for the 444. Could it be the last of the 444 lever-guns?

Why it Made the Cut: Designed to shoot flatter than the .30-30 and compete with bolt-action cartridges, the 7×30 Waters enjoyed some success, but quickly faded into obscurity. Still, it’s a great cartridge if you can find a rifle for it.

As the 20th Century progressed, flat-shooting cartridges began to erode the popularity of the lever-action. After World War II, many had abandoned the platform looking for bolt-actions with longer reach. In 1976, gun writer Ken Waters, looking to increase the reach of the 30-30 Winchester, necked the 30-30 cartridge case down to 7mm, loaded a flat point bullet, and called his creation the 7×30 Waters. In less than 10 years Winchester recognized the beauty of Waters’ design and introduced it in their 1894 lever-action. Marlin followed suit, and it looked like the 7X30 Waters, with its flatter-than-a-30-30 trajectory, was off to a great start. Interest quickly waned, and even though it is a great lever-gun cartridge, its time in the sun was short.

Why it Made the Cut: The .375 Winchester was based on an old cartridge made for the Big Bore Winchester Model 94. At the time, hunters appreciated it for its ability to take down large game animals.

The .375 Winchester is actually a story of three cartridges. Shortly after the introduction of their 1894 lever action rifle, Winchester chambered the rifle for the .38-55 Winchester, which was originally a 0.377-caliber cartridge designed by the Ballard Rifle & Cartridge Company in 1884. The .38-55 Winchester was quite popular for a time but began to fade after the turn of the Century. In 1978, Winchester reintroduced a slightly shortened version of it for their new Big Bore Model 94 and called it the .375 Winchester. With the ability to push a large diameter 200-grain bullet to 2200 fps, it was immediately appealing to anyone wanting to hunt the biggest of big game with a lever gun. Now, 20 years after the .375’s introduction, only about 1 out of 10 big game hunters have ever heard of it.

Why it Made the Cut: If you want your lever-action rifle to shoot like a .308, choose the .307 Winchester.

Quite possibly the most effective big game cartridge ever created for a traditionally styled lever action rifle, the .307 Winchester was short-lived. Introduced in a modified 1894 Winchester called the Big Bore, the .307 is essentially a .308 Winchester with a rim. Almost duplicating .308 Winchester velocities, it can get the job done on big game all over the world. With modern powders like AR Comp, handloaders can even duplicate the original .30/06 load of a 150-grain bullet at 2700 fps. In 2007 Marlin introduced a modified .307 Winchester called the .308 Marlin Express. It too had short-lived popularity and now, sadly, both cartridges are being lost to history.

Why it Made the Cut: The .356 Winchester is a bit of an oddball cartridge. But it has plenty of power. If you can find a rifle chambered for the .356 Winchester, they make great big woods guns.

Introduced as a companion cartridge to the .307 Winchester, the .356 Winchester was a rimmed version of the .358 Winchester. Though available in Winchester and a few Marlin lever actions, the .356 never really developed much of a following. Given that it was more powerful than the .35 Remington and that the .358 Winchester was considered one of the premier woods hunting cartridges, this seems odd. However, like its .307 Winchester sibling, the .356 Winchester is now fading into obsolescence, and it’s doubtful it will ever see a resurgence. In 2009, Marlin tried to fill the void left by the .356 with their .338 Marlin Express. But like Elvis, it too has for the most part, has left the building.

Why it Made the Cut: When shot from a rifle, the .357 Magnum is a different animal. It has enough power to take game out past 150 yards.

This cartridge has been around since 1934, and for a long time, it was the preferred choice for law enforcement in revolvers like the Smith & Wesson 686 and the famous Colt Python. But in the old cowboy tradition of having a revolver and a rifle that shared the same ammunition, the .357 Magnum also became popular in Marlin and Winchester lever guns.

Federal’s HammerDown load will drive a 170-grain bullet to about 1300 fps out of a 5-inch-barrel revolver, but out of a 16-inch-barrel lever gun, that same load can reach almost 1800 fps. Amazingly, this load will deliver good terminal performance out past 150 yards. This makes the .357 lever gun an optimum choice for deer and hog hunting, and even for home defense. Also important is the fact that most lever guns in .357 Magnum will reliably cycle and fire less-expensive and lighter-recoiling .38 Special ammunition.

Why it Made the Cut: A favorite of handgun hunters everywhere, the .44 Magnum works just as well when shot from a lever-action rifle. This cartridge will take just about any animal in North America.

Introduced in 1954, the 44 Magnum was an instant hit in Smith & Wesson and Ruger Revolvers, but quickly found a home in lever guns, where out of a 16 or 18-inch barrel you can expect velocities as high as 1700 fps. That’s more than a 40% increase over 44 Magnum revolver velocities. Though many think the 44 Mangum is a 0.44-caliber, the bullet diameter is actually 0.429-inch, and with the best loads, like Federal’s 270-grain HammerDown, the bullet will mushroom with a frontal diameter of more than three-quarters of an inch. It’ll also penetrate nearly two feet in 10-percent ordnance gelatin. At close range, the 44 Magnum will handle any critter in North America.