The 9 Best Single-Shot Rifles and Shotguns for Any Budget

If you’re the kind of hunter who only needs one good shot, these are the guns for you 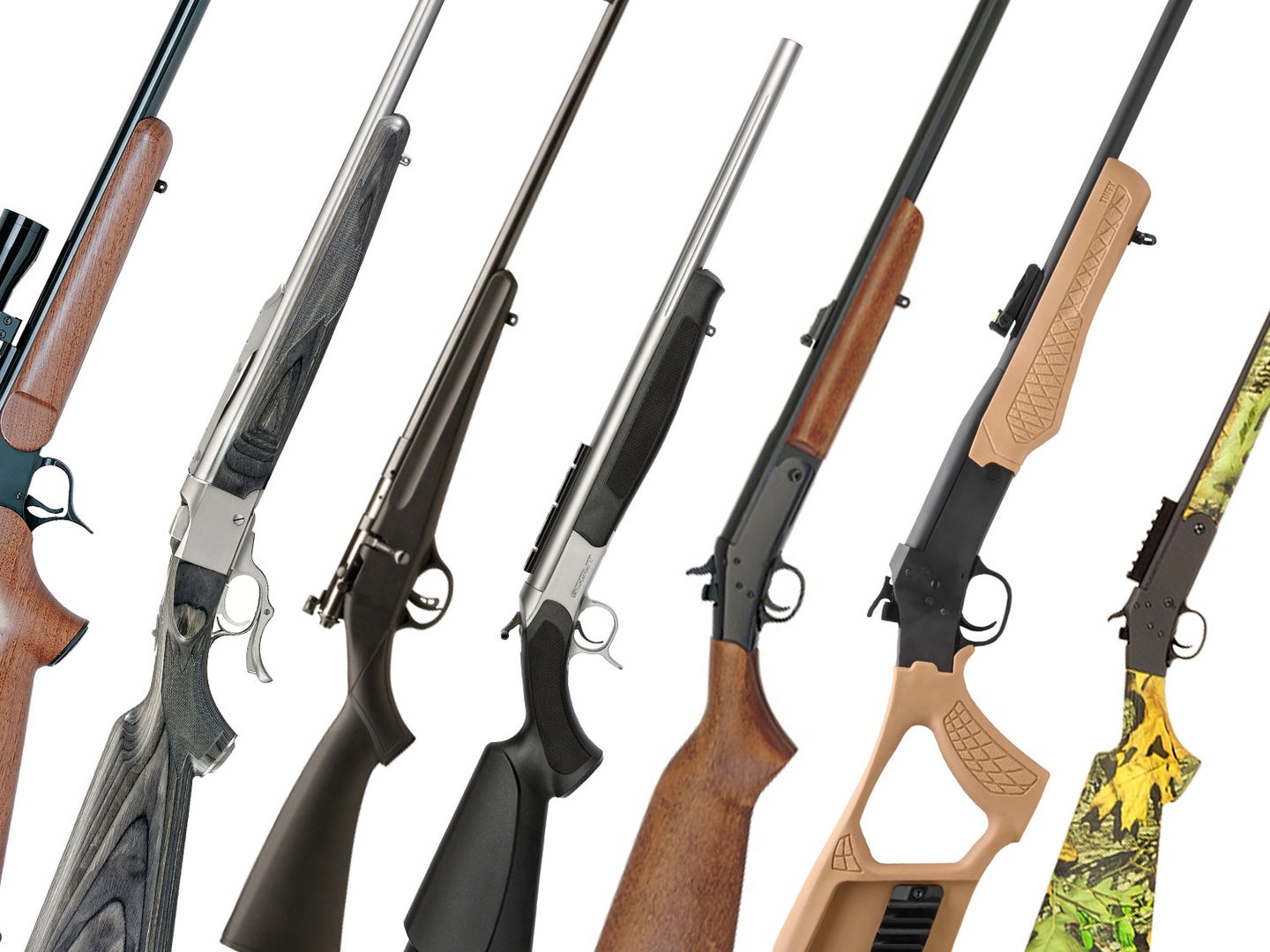 If you’re the kind of hunter who only needs one good shot, these are the guns for you. Field & Stream
SHARE

Modern tastes tend to run to the autoloader, but there’s still a place for single shots in a world dominated by semiautos. Only having one round to get the job done forces you to slow down and concentrate on making that shot count. They’re also usually very reliable and easy to operate. While I would venture to guess that there are more AR-type rifles for sale than single-shots these days, the market still offers plenty of options, in a variety of action types. Break actions are the most common, but falling blocks and bolt actions are still around in force. Here are a few of the best, ranging in price from just under $2000 to just over $100.

Ruger’s robust falling block is stout enough to handle heavy recoiling rounds such as .375 H&H Magnum, .416 Rigby, and .450 Nitro Express, earning it a place of honor amongst dangerous game hunters. Despite only holding one round, the No. 1 has become a favorite of Professional Hunters and sportsmen alike. Developed by legendary gunsmith Lenard Brownell in 1967, the No. 1 has since been made available in calibers all the way down to .204 Ruger, though most are delivered in traditional big game loadings. Ruger has made the No. 1 in a variety of trims over the years, from utilitarian makes with laminated furniture to ornate models with Mannlicher stocks. The No. 1 is actuated by an underlever, which lowers the block and facilitates loading rather quickly. It also has a shotgun-style tang safety. Check availability here.

If you’re like me, you spent a lot of your youth daydreaming about what life must have been like 100 years ago. Unfortunately, you can’t go back to a time when thousands of buffalo roamed the west, but you at least can shoot like it. One of the most instrumental rifles in American history is the Sharps, a falling block single-shot designed in 1848 that can probably take credit for clearing the plains of buffalo. The rifle was originally developed for black powder use, but it was one of the few rifles to successfully transition to metallic cartridges, maintaining its renowned accuracy through the switch. The Sharps was forever engrained in history, becoming an icon of the Old West and appearing in plenty of Western Movies. Uberti manufactures a stunning replica of the 1874 Sharps made famous by Tom Selleck in Quigley Down Under, though this iteration is chambered in .45-70 to make finding ammo for it easier. Like the gun in the movie, the Uberti Down Under features double set triggers that allow the rifle to produce 2 MOA groups despite using a cartridge that is over 100 years old and iron sights. Check availability here.

The Contender started life not as a rifle, but rather a pistol capable of shooting rifle rounds. Gunsmith Warren Center developed the break-action single-shot pistol as a versatile tool for handgun hunting. The groundbreaking pistol used a universal receiver with both center- and rim-fire firing pins that was mated to caliber specific barrels, allowing shooters to use rounds from .22LR up to magnum centerfire cartridges. Shortly after he developed the pistol, Center started working with Thompson Tool Company, bringing the Contender to market in 1967 under the Thompson-Center moniker. The Contender, now in the second generation or G2, has been in continuous production since then, with a rifle variant added to the line. The rifle features a longer barrel and an ergonomic buttstock attached to the universal receiver, giving shooters the choice of nearly 40 different barrels in a wide variety of calibers including .17 HMR, .22 LR, .204 Ruger, .223 Remington, 6.8 Remington, 7-30 Waters, and 30-30 Winchester. Check availability here.

Many folks’ first foray into firearms involves a .22LR. The low recoil and limited report of the rimfire round are a good way to ease youths and newbies into the world of shooting. With the inherent safety present in a single-shot bolt-action, rifles such as the Savage Rascal are a great first gun for youngsters. The rifle is cocked by lifting the bolt, and working it again unloads the gun. This downsized stock features a length of pull around 11 inches, so it’s sized perfectly for smaller shooters, and comes in an array of fun colors. Despite the very attractive price tag, the Rascal features Savage’s excellent AccuTrigger, which is user-adjustable to break cleanly anywhere from 1.5 to 6 pounds of pull weight. The Rascal also features adjustable peep sights, making transitioning to rimfire competition easy. Check availability here.

CVA has been making muzzleloaders since 1971, starting out with traditional sidelocks. Since then, their product line evolved to include inline muzzleloaders and eventually centerfire rifles. To create their centerfire single shots, CVA used the same proven break-action found in the company’s inline muzzleloaders. The CVA Scout comes chambered in a variety of calibers to take advantage of straight-wall cartridge seasons, but can also be found in bottlenecked varieties for those who live in states with no restrictions and prefer to hunt with a single shot. Operating the action is simple; just pull on the distinctive trigger guard to crack it open. CVA threaded many of the barrels, letting owners fit them with a suppressor or attach a compensator to take some of the kick out of rounds such as .450 Bushmaster. The Scout wears an ambidextrous stock and is available with a fluted stainless-steel or blued barrel, and is topped off with a rail to mount optics. You can even get the Scout in .410 bore, complete with a camo finish and Jeb’s extra-full turkey choke to get the most out of TSS loads. Check availability here.

Read Next: The 10 Best Bargain Shotguns

Harrington & Richardson was founded in 1871 after gunsmith Gilbert H. Harrington invented a top-breaking revolver that ejected spent shells—revolutionary for the time. The Handi Rifle is a break-action actuated by a button conveniently located next to the external hammer. Modern refinements to the classic rifle include a transfer bar safety that makes the gun drop safe and synthetic furniture, including a thumbhole model. Available calibers go from .22 Hornet all the way up to .45-70, so you can take everything from woodchucks to black bears. Depending on the chambering, you can get the Handi Rifle with a heavy contour or Sporter profile barrel, a good option if you’ll be doing a lot of walking. Depending on trim, models are fitted with a ramp front sight with an adjustable rear, drilled and tapped for a scope mount, or already wearing a rail. $103 and up; hr1871.com

The ability to swap calibers readily makes break-action single shots pretty versatile. Rossi’s Matched Pair requires no tools to change barrels, making switching from rifle to shotgun in the field or at the range simple. Just loosen the sling swivel stud by hand, and exchange the .22LR barrel for the .410 and get back to hunting or plinking. The Tuffy trim is a synthetic-stock update to the gun’s wood furniture. It comes in a few different colors and incorporates storage for spare .22 LR and .410 ammo in the buttstock. And while the gun is geared towards youth hunters, the Rossi Matched Pair makes a good squirrel combo for hunters of any age. Check availability here.

The advent of heavier-than-lead shot has created a bit of a renaissance in sub-gauge shotgunning for turkeys. TSS loads pack enough of a punch that .410 shotguns are now viable turkey takers at reasonable distances, and many folks have ditched their hard-kicking 12-gauges in favor of them. The Stevens 301 Turkey was built with TSS in mind, offering the lightweight of a single-shot for an endeavor that should only require one pull of the trigger. A length of pull of less than 14 inches makes it ideal for shooting while propped up against a tree, and the ambidextrous nature of the gun is handy if a long beard comes in from the wrong side. A matte finish and camo stock helps keep it concealed from wary Toms, and the extended choke ensures that the payload stays together. Check availability here.

The M6 can’t rightly be considered a single shot because of its dual barrels, but its utility warrants mention here. Developed in 1946 as a survival firearm that would allow military pilots to hunt if their plane went down, the original M6 Air Crew Survival Weapon featured a .22 Hornet barrel over a .410. The centerfire round offered enough power to take mid-sized game in a pinch, and the shotgun barrel let the unfortunate soul employing it to take birds on the wing. In the decades following its introduction, various companies have offered the M6 to civilians. Currently, Chiappa makes a version with .22LR and 20-gauge barrels. It’s more refined than original, but only slightly. The stamped sheet metal furniture has a bit of foam sandwiched in the butt to store rounds, and Picatinny rails on the top and sides of the receiver allow for accessory mounting. The firearm features double triggers instead of the elongated pad on the military version. You can also pick up a set of adapters that allow the M6 to shoot a variety of rounds through the 20 gauge barrel, though the short length of the adapter tubes precludes any sort of accuracy.