How to Buy a Used Rifle—at a Bargain Price

Get a killer deal on your next rifle by buying a used gun. But beware the pitfalls. Here’s what to look for and avoid to get a great used rifle at a discount 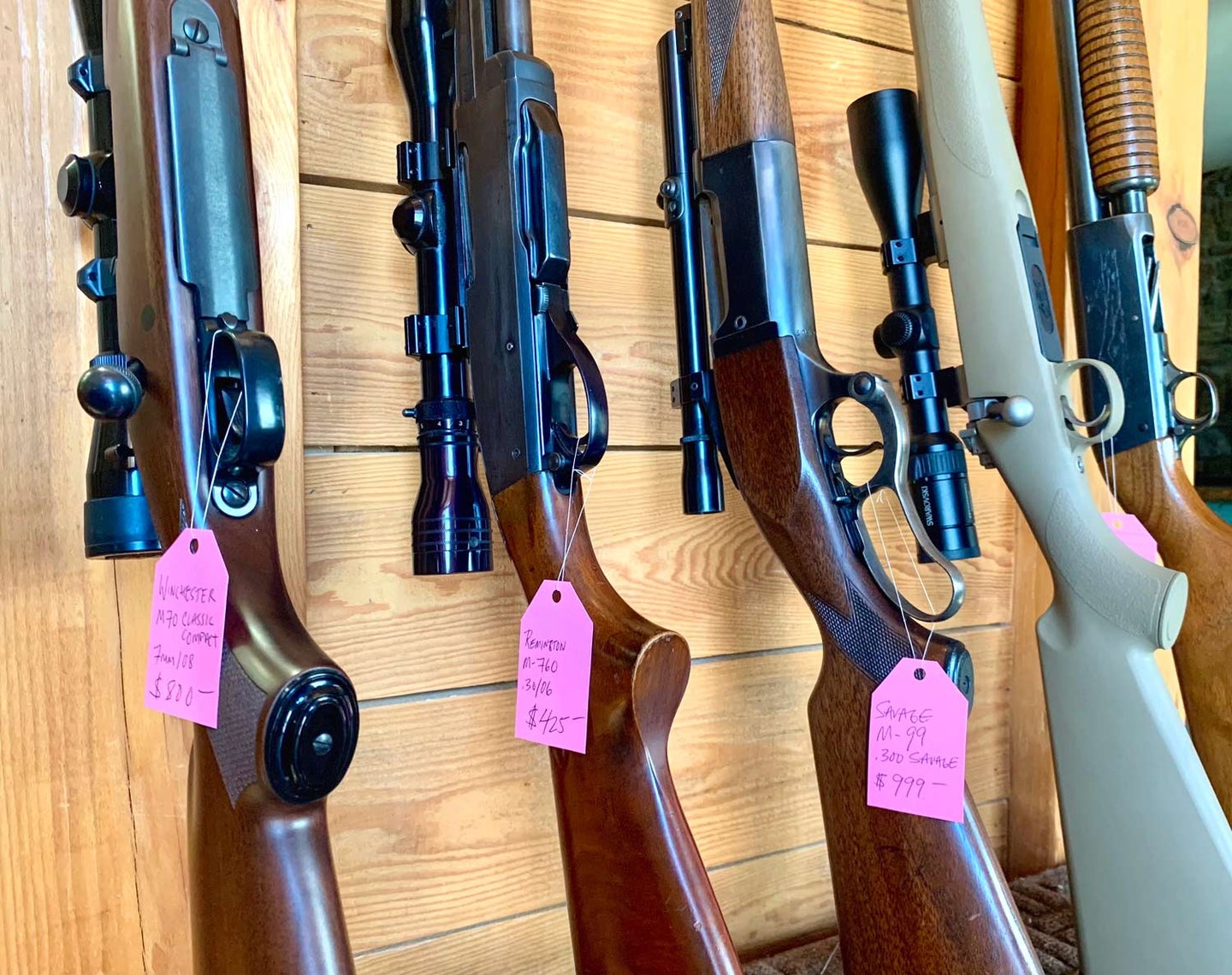 A rack of used rifles for sale. Mike Lovell As Told To Dave Hurteau
SHARE

Frequently, I’m approached by people who ask what the best bargain in rifles is, and my response is always the same. “Get away from me or I’ll hit you with this stick.” (I carry a stick for just such occasions.)

Once we have the correct social order established, I explain that the best bargain is not a particular brand of rifle, but a used rifle, and particularly at the point in history. As we continue our descent from the First World to the Third, people are having to part with some very good guns. The true bargains are not the cheap guns that are selling cheaper because they are used, but the really good ones that no longer cost big money.

It’s natural to think that people trade in rifles because there’s something wrong with the gun. In fact, that’s not usually the case. Instead, they’ve hit the used-gun market for one of the following reasons.

Recoil Photo: Plenty of fine guns, like this Marlin 1895G in .45/70, end up on the used market because it kicks too hard for the previous owner.

Gun owner takes a dirt nap. Kids are not interested in shooting, so the gun goes on sale.

Owner loses interest in shooting for some reason.

OwnerI trades rifle to get something a gun writer wrote about (worst of all reasons to trade rifle).

Owner get into financial trouble; guns go to raise money.

Owner moves to new locale were guns are not welcome. Has to get rid of guns before relocating.

Husband and wife go to court. Judge hears both sides. Judge says give him or her everything. Gun collection goes to pay settlement.

Many reputable dealers give each used offering a grade—one of six standardized categories that denote the condition of the gun. If you’re going to buy a graded rifle, you need to know what those grades mean. So here they are.

The gun is pitted and rusted, may not be in working order, and may not be safe to shoot. Forget it.

It works and is safe to shoot, but it has taken a beating. Consider it only if it’s dirt cheap, and you don’t mind paying to have it touched up, or if you want to do the refinishing yourself, or if you just want something you can knock around.

The rifle is in fine working order, but repairs or replacement parts may be needed. It should have 80 percent of its original finish.

The gun should have more than 90 percent of its original finish, be in perfect working order, have no replacement parts, and need only very small repairs, if any.

Just short of brand new, it shows only the most minor signs of wear or use.

It’s just as it came from the factory, with all the tags, stickers, labels, and everything else. This category is more for collectors than shooters.

12 Reasons Not to Buy a Used Rifle

Many used guns are not graded, however. And that means it’s up to you to spot problems. Here are 13 potential deal-breakers to look for and avoid.

1. A dirty bore, or a bore with copper streaks. The only way to see what condition a bore is in is to examine it with a borescope after it is cleaned. The naked eye can’t do the job.

2. Chips or dings at the muzzle. They ruin accuracy, and the barrel must be recrowned.

3. Rust, anywhere, in any amount. A deal breaker.

5. Pits in the bolt face. These come from blown primers, which means that someone was firing too-hot handloads in the rifle.

6. A rifle that fires when the bolt is slammed forward and down. There’s not enough sear engagement, which is dangerous.

7. A trigger that is excessively heavy, creepy, or light, or shows signs of having been tampered with. This especially true of ARs, which people love to tamper with.

8. A rifle that will fire when you cock it, put it on safe, pull the trigger, and then throw the safety to the off position.

9. A chamber that is worn out of round. This comes from the poor use of a cleaning rod and means the rifle will not shoot accurately.

10. Rifling that’s scorched from the lead a couple of inches forward. The barrel may be at the end of its useful life, or close to it.

11. Any rifle that shows signs of home gunsmithing. There are two kinds of people who work on rifles: those who know how in the morons. Amateur tinkering cannot only render a rifle useless, but dangerous.

12. Bargains that seem too good to be true. If someone offers you a rifle for a fraction of what it’s worth, he may be genuinely desperate for quick cash, or he may be selling a stolen gun. As a rule, if you find a rifle in good condition that is selling for less than a third of its new price, it should be looked at with suspicion.

13. Rifles chambered for obscure wildcat cartridges or famous wildcat cartridges. Unless you are an advanced handloader, you won’t be able to feed it, and you’ll find it almost impossible to dump the thing when it aggravates you terminally.

Where and How to Find Good Used Guns at Bargain Prices

By and large, gun shops are the best places to get a good deal on a good rifle. I am very cautious about what I buy and from whom. This is true of just about anyone who invests in used rifles and knows what he’s doing. You can go online and find lots of websites selling used guns; maybe they’re good, maybe they’re not. I like to know the guy I buy from and put my hands on the gun before I even consider taking out my wallet. Some shops will even let you shoot the gun in question before buying. This is the best of all possible worlds.

Gun shows are a major source of bargains, but there are a couple of cautions: First, don’t think that you’re going to encounter some poor oaf who has no idea of the value of what he’s selling. At every show I’ve ever been to, each dealer knew exactly how much his stuff was worth. Second, if you happen to get stuck with a lemon, you are well and truly stuck. A gun store is going to be there the next day, as will the websites that sell used guns. But the guy at the show who took your cash may very well vanished, never to be seen again.

The Internet and Auction Houses

If you want to expand your boundaries, first consider Cabela’s Gun Library, which can be accessed online as well as in the stores. Kittery Trading Post is also on line and in person, and is the largest dealer in used guns east of the Mississippi. They are scrupulously honest. There are also a number of reputable auction houses, including Rock Island Auction Company and Amoskeag Auction in Manchester, New Hampshire, which offer both in-person and online bidding.

There are also the popular online options, like Gunbroker and GunsAmerica. I have not used either and remain generally skeptical. I have friends, however, who have used both and have never had a problem. Here’s what I would say: Insist on a grace period during which you can return any gun you don’t like, and don’t forget that you’ll have to pay a gunshop a transfer fee, so add that cost into the price. Otherwise, proceed at your own risk.

Some restoration work can get you a hell of a bargain. See if the seller will allow you to take it to a gunsmith to get an estimate on what it would cost to restore the gun. You may be surprised at how little it costs.

Keep in mind, also, that many used rifles are sold on consignment and the prices are not unchangeable once they gather dust. That’s when you meet up, checkbook in hand.

As a general rule, though, your goal shouldn’t be to find the absolute lowest price. That’s a sure way to find trouble. Instead, look for a fair price on a great gun in solid condition, and you won’t be sorry.