How to Sight In Your Hunting Rifle—the Right Way

Before you bring your rifle into the field, bring in to the range and makes sure it’s dead on. Here’s how 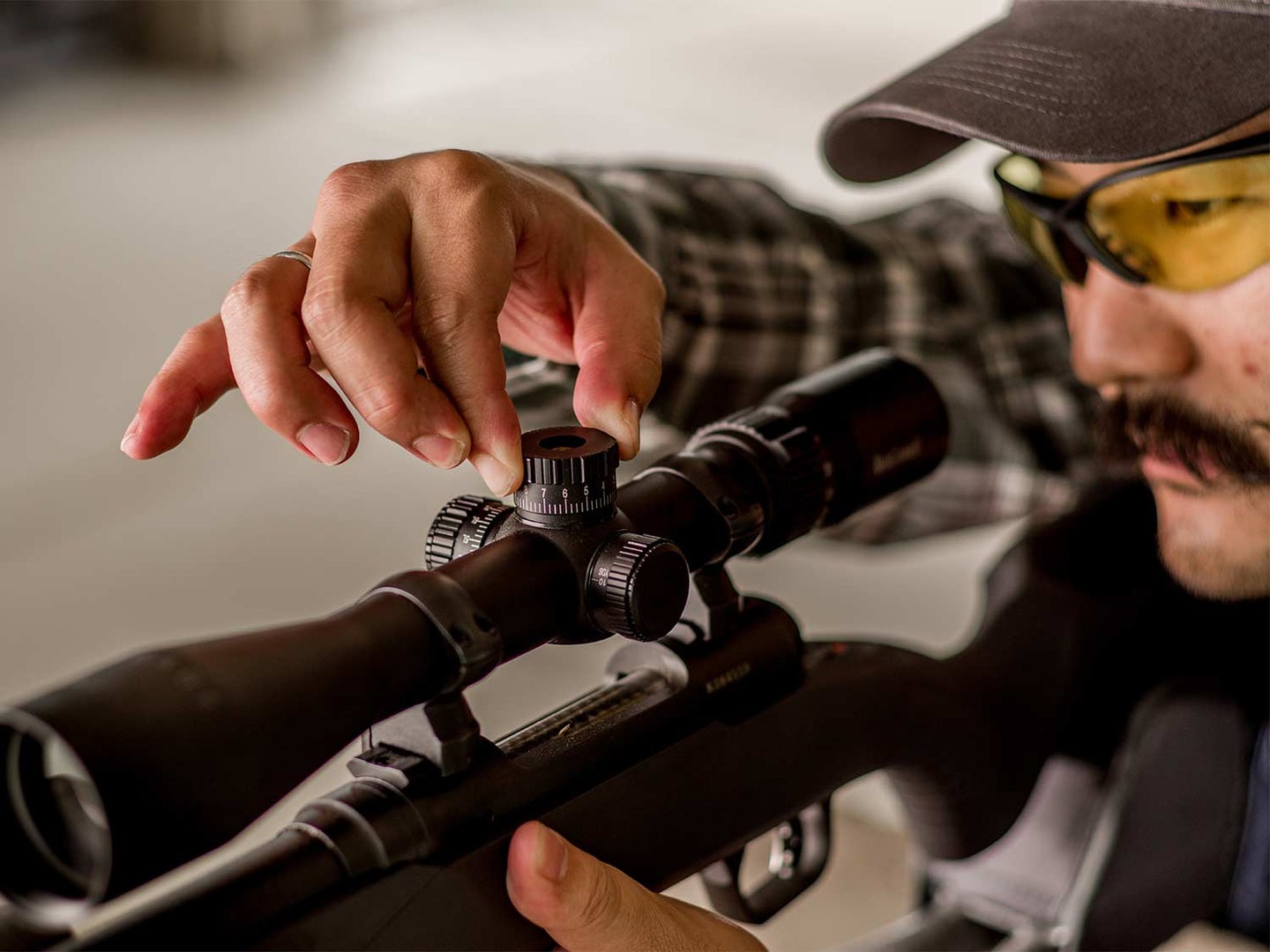 A scope with an exposed elevation dial is handy for sighting in beyond 300 yards. Federal Premium
SHARE

Even as you read this, there are countless big-game animals living useful, productive lives because the people who shot at them neglected to sight their rifles in. Don’t assume that your rifle shoots just where it did when you last put it away. Wood stocks love to absorb humidity, or dry out, causing a shift in impact. And don’t ever forget that shift happens!

Laminated-wood stocks are stable, as are synthetic stocks, and AR stocks, and chassis stocks. But scopes are not stable. That means if you dropped your rifle before you put it away, and meant to check it, and didn’t, you’re probably in for an ugly surprise. Or, if one of your friends dropped it and never told you, or if it traveled by air, the crosshairs are probably not where they should be.

In any case, whether you have a new rifle or you’ve put on a new scope, or it’s just been awhile, you need to know how to sight in your rifle properly. Here’s how.

Get Close and Boresight Your Rifle

Don’t start off at 100 yards. Start off at 25 and use a target with a nice, big, black bull’s-eye, like the NRA B-8 rapid fire pistol target, or with the Birchwood Casey Shoot-N-C 17.25-inch target.

The cheapest and probably most accurate way to get on paper is to boresight the rifle. The involves removing the bolt, looking down the bore, aligning the bull’s-eye in its center, and without moving the rifle, dialing the crosshair into the center of the bull. Unless there’s something drastically wrong, this will get you onto the paper, and usually into the black.

If you have an AR, you can boresight by removing the bolt and carrier and taking the Upper off the Lower. Lay the Upper on sandbags, and proceed as you would with a bolt-action.

Unless your rifle has proven to be very accurate, don’t fire one shot before you adjust the scope; fire three. The center hole is where the rifle is shooting. Then make the proper scope adjustments, and remember that at 25 yards, you’ll need four times the number of clicks that you would at 100. With most scopes, if your rifle is hitting 1 inch to the left at 25 yards, for example, you’ll need to turn the scope’s windage knob not 4 but 16 clicks to the right.

Fine Tune Your Point of Impact

Once your rifle is printing tight groups in the center of the bull at 25, then you can move back to 100 and start shooting groups to fine-tune. This is also the time to try different loads to get the tightest groups possible.

Don’t let the barrel heat up. When it counts, you’re going to be shooting with a cold barrel, and very few rifles print to the same place with a warm or a hot barrel.

When you think the rifle is sighted in correctly at 100 yards, take it off the sandbag and slip your hand under the fore-end and fire a group. Some rifles are highly sensitive to the surface that supports them and will not shoot the same off a palm that they will off a hard sandbag. You need to know this.

If you’re going to limit your in-field shooting to 300 yards or less, the best zero is still 3 inches high of the point of aim at 100 yards. With most big-game cartridges, this will put the bullet 3 to 6 inches low at 300, which will put horns on the wall. (And you better check this by shooting; I’ve seen bullets drop like stones past 200 yards.)

If you want to shoot past 300, I’d either get a scope with a tactical elevation dial or one with a range-compensating reticle. Or one with both. If you choose the former, be sure that the elevation dial is accurate; there are plenty that aren’t. Nightforce, in a walk, makes the best. The new Leupolds that I’ve used are not quite as good, but they’re very good, and far better than the Leupolds of five years ago.

Range-compensating reticles work, but you have to find out where they shoot, and this can only be done by actually shooting. Mil dots are good, and so is the Leupold B&C reticle.

Shoot, Shoot, and Shoot Some More

I can’t overemphasize the importance of doing the actual shooting. Factory drop tables are very accurate these days, but they’re not Real Life, and you need to find out what Real Life consists of. Also, unless you’ve put in some trigger time, when the moment comes to shoot for meat, whatever you think you know will go right out of your head. And, you need to figure out how to compensate for wind, and its insane little brother, mirage. I can now can shoot well enough that I can put 18 out of 20 shots in a 6-inch circle at 600 yards. But it took me six summers of intensive shooting, and who knows how many thousands of rounds of ammunition.

There are no shortcuts here; there’s nothing you can buy that’s going to guarantee your success past 300 yards. Absent putting in the practice time, you might as well throw rocks.

How to Read Targets When Sighting In

Were this the best of all possible worlds, we would fire three rifle shots at a target, peer downrange, and see three holes clustered within the area of a dime at precisely the right place. But this is not the best of all possible worlds, in that it has a place for chiggers, bad cholesterol, rabies, and abdominal fat. And in this veil of sorrow, we often look at our targets and see nothing but horror, chaos, and disorder.

In any event, we know that something is wrong, but what? Rather than burst into tears, you should regard this as a heart-to-heart talk with your rifle, which, if you speak its language, will tell you what ails it.

Here is how to read your imperfect rifle groups, understand what is going wrong, and fix the problem.

Your shots are all over the place, and you can’t get a group to save your life. There could be several causes. First is a ruptured scope. The way to test this is to put a different scope on your gun and see if it groups better. Second is loose bedding screws on the rifle. Check to see if they’re tight. Third is loose ring or base screws. Ditto.

Sometimes, one particular bullet weight will give results this bad. If this is the case, it’s usually because the barrel’s rifling twist is wrong for that bullet weight. So try changing that up.

Your ammo is almost, but not quite, right for your gun. Usually this shows up as two holes close together and the third off to the side by an inch or two. At 100 yards this is not a problem, but at farther distances, it will begin to give you some trouble. It’s caused by bullets traveling just above or below the optimal speed for that barrel, causing it to vibrate inconsistently. Handloaders can cure it by raising or lowering the powder charge. Non-handloaders will have to try different ammunition.

Most of the time you get good groups, but sometimes you have one shot go astray, and then sometimes all three go where they’re not supposed to. Most likely you’re flinching, and if you don’t think that it’s possible to flinch on a benchrest, think again. You can buy or experiment with a sled-type shooting rest, which can virtually eliminate felt recoil, or try putting a soft gun case or sand bag between your shoulder and the rifle’s butt. Or, if all else fails, get a less-punishing rifle.

Your groups are usually OK, but they seem to keep moving up on the target, sometimes up and to the left or right, and sometimes straight up. This is caused by an overheated barrel. When a tube gets too hot, it warps slightly, sending bullets errantly, and in addition, the heat waves rising from it give you a distorted view of the target, sort of like shooting through a swimming pool. The cure is easy: Let your barrel cool down. Start each group with a cold barrel and don’t let it get beyond lukewarm.

In this situation, your group strings vertically or horizontally. First check the barrel bedding. Most barrels today are free-floating; there should be no contact from 1-1/2 inches forward of the receiver right out to the end. If there is, take the gun in for a re-bedding job. Horizontal stringing can be caused by wind at the target that you don’t feel at the bench. Vertical groups can be caused by the fore-end jumping off hard surface. Try putting a hand under the fore-end, or simply rest it on something softer.