Is There Really a Recall on the Colt Python? 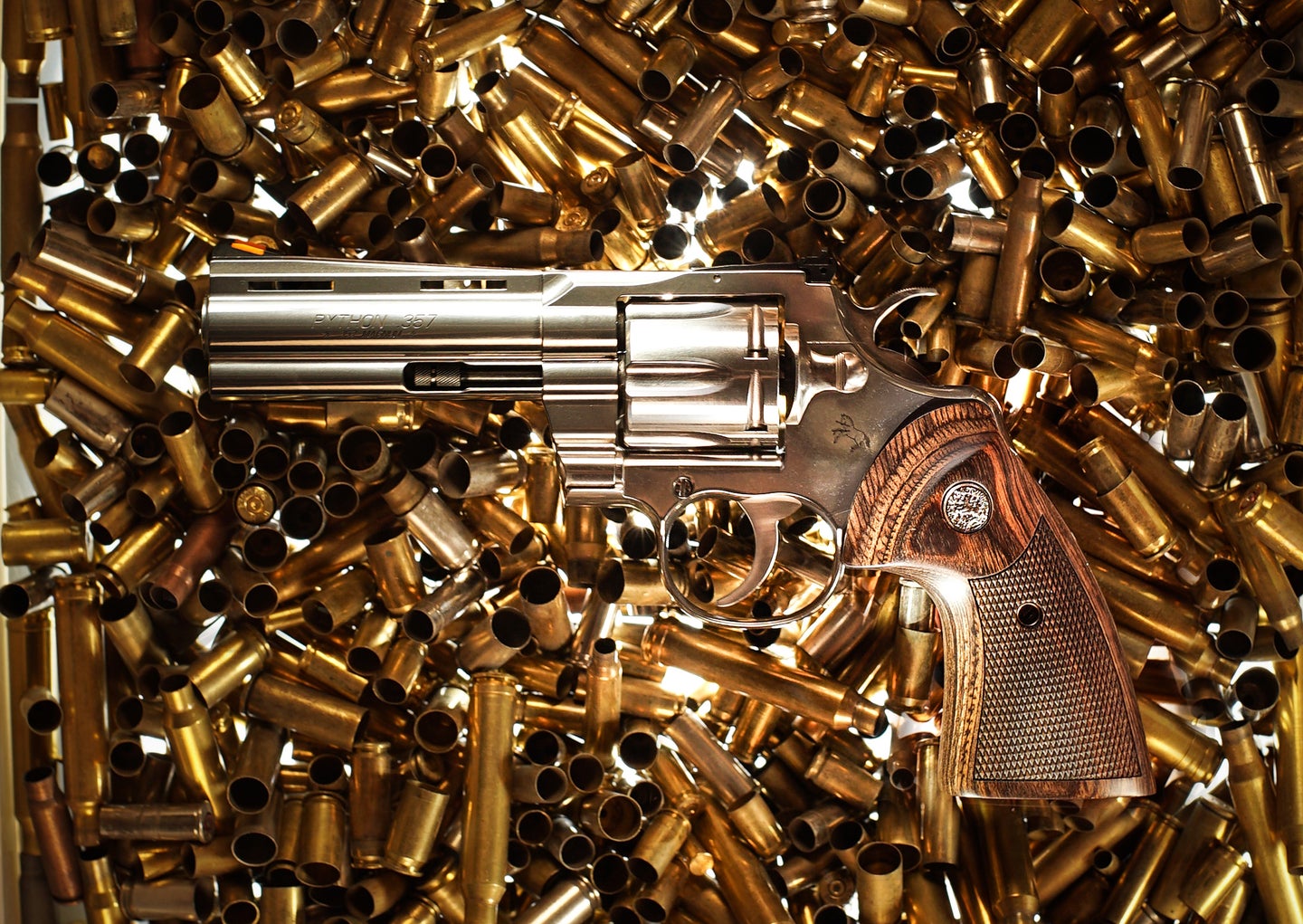 After the release of a YouTube video where the The 2020 Colt Python was seen to malfunction, people have made claims that Colt is recalling the firearm. Colt's Manufacturing Company LLC
SHARE

A few days after the SHOT Show, a buddy asked what the best thing I saw was, and I answered with the Colt Python. I’ve been to 10 SHOT Shows now, and I’ve never seen more buzz around one gun. That it’s 2020, and the gun is a reintroduction of a heavy revolver first introduced in 1955, is no small thing. Nostalgia and Hollywood can create an appeal that practicality cannot match.

Although there are some differences in the new Python and the original (the biggest being the new transfer bar safety, in contrast to the old hammer block), the fascinating part of this story is not really the gun. It’s about a market that was created by the gun. That this revolver has become so desirable—and so often searched online—has in a way created a problem for the 2020 Python that didn’t exist for the original: It must now survive the Internet.

Case in point, when I mentioned the Python to my buddy—who is a revolver guy—he matter-of-factly said, “Yeah, but the new one is having problems, and Colt recalled them.” We also had a number of readers comment on our Python coverage from the SHOT Show, saying the same thing. So I did some digging around, to see what I could verify.

If you read nothing else, read this: The recall rumor is false (as I’m writing this). But at least a few Pythons have had some problems. Here’s what I found.

First, some background information on why this relaunch is such a big deal. A lot of the people buying handguns right now are in their late 30s to early 40s. Though we mostly carry autoloaders, many of us did learn how to shoot on revolvers. I know I did, and in fact, I grew up kicking around the woods with a wheel-gun almost constantly on my side. The look of a classic double-action just stirs good feelings, and if you’re talking classic double-actions, the Python’s reputation is near-mythical. But that reputation created only part of the demand.

On Halloween of 2010, The Walking Dead debuted and became one of the most-watched shows in television history. The protagonist, former lawman Rick Grimes, wields a 6-inch Python against bad guys, both living and undead. Gun blogs lit up about what a poor choice a magnum revolver would actually be in the zombie apocalypse, what with all the Glocks and such laying around, but it didn’t matter. The Python became the good guy’s tool in a world gone really bad.

I doubt pop culture has had a bigger impact on a particular gun since Dirty Harry hefted the Model 29. The difference is, Smith & Wesson was producing the Model 29 when the world met Dirty Harry, but the Python had been out of production for years when we met Rick Grimes.

Colt had already been teasing the revolver market with the reintroduction of the Cobra and King Cobra. Their timing to bring back the Python simply couldn’t have been better. Like many in the media, I saw the new one for the first time at the 2020 SHOT Show’s Range Day. I fired several cylinders of .38 SPL through it, just enough to note that it’s pretty, it hit where I aimed, and that it had the smoothest double-action trigger I’ve ever tried.

But not everyone who tried the new gun had the same experience. I didn’t know the Internet was grumbling about it until we posted our Range Day coverage, and readers began chiming in about the supposed recall.

Throughout the original Python’s production, YouTube did not exist. It does now, along with countless shooting and gun review channels. And if you’re in the firearm business, you’d best take them seriously. With 4.73 million subscribers, Hickok45’s channel is maybe the biggest one out there. And on January 12, a week before SHOT Show Range Day, he posted a video review during which he’s shooting a new Python, and the gun’s cylinder fails to turn numerous times, in both single- and double-action. At last check, the video had more than 500,000 views and 2,800 comments. Among them:

“Sam Colt is revolving in his grave right now.”

Competing channels posted videos about the gun, too, some claiming similar problems, while others, seemingly more interested in discrediting Hickok45, claimed he either deliberately caused the malfunction or didn’t know how to operate a double-action revolver.

If you’re on the sidelines thinking of buying a Python, the mixed messages are enough to make you ask, “What the hell is going on?”

I spoke to Hickok45, who rarely gives media interviews and asked that I not use his real name. He insists there was no motive behind the video, but that the gun he used did have genuine problems. And, he knows how to shoot a revolver.

“I’ve probably put 200,000 rounds through double-action revolvers over the years, and have owned around 50 of them—including two or three Pythons,” he says.

“Usually, if we have problems with a gun right out of the box, we just don’t post the video,” he continues. “It happens, and we’re not out to bash anyone. But the video of the Python was going well until the very end, and that’s why we decided to show it. We posted a message about the malfunction at the beginning because we were afraid people would miss it (the video is more than 35 minutes long), being at the end. Several people thought I was trying to make the gun look bad, or faking it. But that wasn’t it. To me, it was very clear what was happening. The cylinder wasn’t turning, and it was doing it in both double and single action. I’m not sure you could fake something like that.”

He didn’t speculate on the recall rumors. “I think the problem was real, and I think there’ve been others who’ve had similar problems,” he says. “But the question is what percentage of (the new Pythons) is it happening with? Maybe it’s just one in a hundred, and there weren’t enough out there for Colt to make a big statement or announce a recall. My bet is they fix it, and everything will be fine in six months.”

Justin Baldini, Colt’s product director, says there has been no recall on the Python. The gun used in Hickok45’s review has been returned to Colt, and no one is denying that it malfunctioned. “The first thing we looked for was loose screws in the side plate,” Baldini says. “If the side plate on the new gun gets pushed outward a bit, that can cause the malfunction. But at this moment, we’re still not 100 percent on it. Hickok’s gun and one other are the only two that have come back for any functional issue.”

Baldini added that the new Python is designed to be shot. During development, it tested with 12,000 full-magnum .357 loads, without any stretching or twisting of the frame. “We went into it with the intention of building a beefier gun,” he says. “But if someone buys a Python and has trouble with it, let us know. We have a great service center, and we’ll get it squared away. It’s still a mechanical device, built by people.”

Truth is, when you’re reviewing equipment—and I’ve reviewed a lot of equipment—even the best of it can malfunction. As the old saying goes, $#@! happens. When it happens amidst a product launch that’s as high-profile as the new Python, and on a platform large as Hickok45’s … well, that’s enough to get gun people gossiping.

Still, despite hiccups, there’ve been 2,300 new Pythons built and shipped so far, and they’re now back-ordered to the tune of 14,000 guns, which is about a year’s worth of guns, according to Baldini. That’s not a bad start.

So knowing all this, what would I do, if I wanted a Python? I’d recognize that the new one is not only less expensive than the old one, but probably sturdier, too. I’d get my name on the waiting list, and when I got one, I’d shoot the hell out of it. If it messed up, I’d send it back for repair. That’s what I’d do for any gun not working just right.

Then, when I wasn’t shooting it, I’d keep it clean and locked up in the safe. And every now and then, I’d pull it out, look at it, and think, “By God, I’ve finally gotten myself a Colt Python.”