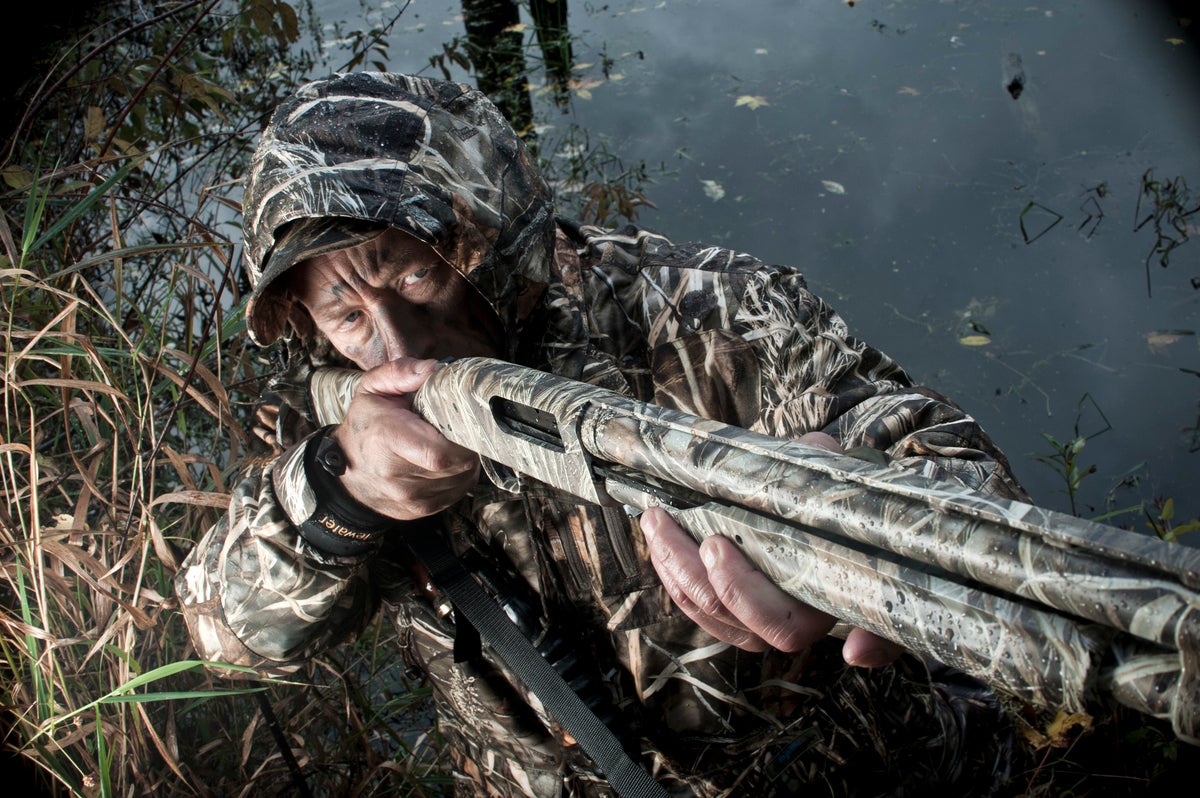 There’s always a good reason to get another shotgun. John Hafner
SHARE

Short barrel, tight choke, sling swivels, and some type of sight makes a turkey gun. It should be a 12 gauge with a 3- or, if you must, 3½-inch chamber. Mine is an exceedingly ugly 870 Super Magnum with a 22-inch barrel, iron sights and a tapped receiver for a scope or red dot. Last couple of years, I have been in a red dot mood.

Disclaimer: You don’t actually need a turkey gun. Now that we have Winchester Long Beard, any standard Full choke 12 gauge will kill turkeys to 40 yards plus. So long as your gun shoots straight and has swivels for a sling, it’s turkey gun enough.

Waterfowl require a big gun like a 3- or 3½-inch 12-gauge with a 28- or 30-inch barrel. It can be a pump or a semi-auto, your choice, or even an O/U, although I am a big believer in the three shots and fast reloads of a magazine gun for shooting backup shots and stopping cripples. The main requirement is that it works in any weather, including extreme cold. The long 3½-inch shells are unnecessary for any over-decoy shooting, but they can give you a few extra yards of range for pass shooting. This one can double as a dove and/or turkey gun.

This one is for big birds and wide open spaces. It’s your pheasant gun, and the gun you shoot when coveys of huns are jumping at 35 yards. I like break actions so we’ll make it a 12- or 16-gauge O/U or double. It should be light enough to carry all day, but still hefty enough to swing, with some weight forward balance and Light Modified and Improved Modified chokes, ideally. While I like break actions because they are easy to open for safety’s sake when you’re crossing obstacles, your open country gun could be a light pump (Ithaca 37, say) or semi-auto with a Modified choke if you prefer

You also need a gun for little birds in the woods: grouse, woodcock, and quail. It’s a 20, or maybe even a 28, although it could also be a light 12 or 16 if you can find the right gun, which would probably be an English or Continental double.

This gun will be balanced a little farther back than Upland Gun #1 (so you can carry it in one hand while fending off brush with the other), and it will have open chokes, like Skeet 1 and Skeet 2. Or, you can ignore my advice and buy a 12 gauge Benelli UltraLight with 24-inch barrels and you’ll have one of the best carrying brush guns ever.

You can shoot doves with any gun, but if you want one specifically for dove hunting, it should be a 20 gauge semi-auto and not necessarily feather-light, since dove hunting requires many shots and a gun that has enough weight to swing smoothly. The dove gun serves as the chukar gun, too. I have only hunted chukars once, but I learned that a light gun is easier to hang onto as you’re sliding down a mountainside, and after all the effort it takes to get up on chukars, you want more than two shots when you get into range. The dove gun also works for snipe and rails with light loads of steel.

Those are my picks. If five guns still doesn’t seem like enough, remember that you “need” backups for each gun, plus a gun for upland hunting in bad weather, and, of course, guns for the clay target games. There’s always a reason to add another one.

Read Next: 10 Traits of a Perfect Dove Gun

Seven Features That Make a Shotgun Easier to Shoot

“I can really shoot this gun,” you might say, or you may admit: “I can’t hit a thing with this gun.” Why? What makes a shotgun shootable? A few factors.

My list of what makes a gun easier to shoot may or may not match up with yours. I am not a great shot, but I can pick up almost any gun and shoot it okay, which is a good ability to have in my line of work where I shoot lots of different guns. Here’s a list, in descending order, of important factors that make a shotgun shootable.

If a gun doesn’t shoot where you look, it’s pretty hard to hit anything with it. For me, a comb that is too high makes it tough to do anything but shoot over the top of gamebirds. Surprisingly, a comb that’s way too low, like the ones on many old American doubles, is easier to adapt to than you might think. You have to keep your head up all the way through the shot. I have read various explanations for why guns used to be stocked that way, including the speculation that shooting with your head upright prevented your top hat from falling off in the field.

If a gun is light in the muzzle, it’s easy to carry, easy to hit those birds that flush in your face

with, and very difficult to swing well on anything that’s crossing. My 20 gauge SKB with 25-inch barrels and the Benelli UltraLight are two guns I’ve shot a fair amount that are great in a thicket and terrible when a bird flies past at any range greater than about 20 yards. It’s much easier to shoot guns with some weight up front, although if they have too much weight up front they become draggy.

It’s easier—for me anyway—to shoot a heavy gun better than a light one. Heavy guns swing smoothly, point surely, and absorb recoil. Sure, they’re not lightning quick, but speed is the most overrated trait in shotgun shooting. Slow and steady wins the race in shotgunning, and slow and steady is easier to achieve with a heavy gun.

The less a gun kicks, the easier it is to shoot well. Recoil beats you into bad habits: head lifting and dropping the gun off your shoulder. It makes shooting less fun and more work, and when that happens, your shooting suffers.

Hand your gun to someone to try and they always ask “What’s it choked?” and I always answer politely while thinking: “Who cares? Is it really going to change the way you shoot this target?” The right choke gives you a few more inches of pattern spread at the right range, but most targets are missed by feet, not inches.

People who are more sensitive than me, and that’s a lot of you, might notice a shotgun’s trigger pulls. I never do. I had one of the first Benelli Novas and everyone wanted to try it. I remember handing it to one guy on the skeet field and watching him try to shoot two or three targets. The gun never went off no matter how hard he pulled the trigger. “Is this safety on?” he asked. It wasn’t, but the gun had a nine and a half pound trigger and it took a stout yank to make it go off. It never bothered me, but some couldn’t hit with the gun because of it.

A shotgun’s bead is there not to be looked at. The currently popular glowstick beads are fine if you keep them in your peripheral vision. So is any other kind of bead, and so is no bead at all. Unless a bead is so huge and bright I can’t ignore it, beads make practically no difference at all to me. Your mileage may vary.