Should You Buy an Aftermarket Rifle Stock?

Can a rifle-stock upgrade turn Old Betsy into a tack-driving precision rig? We tested six to find out 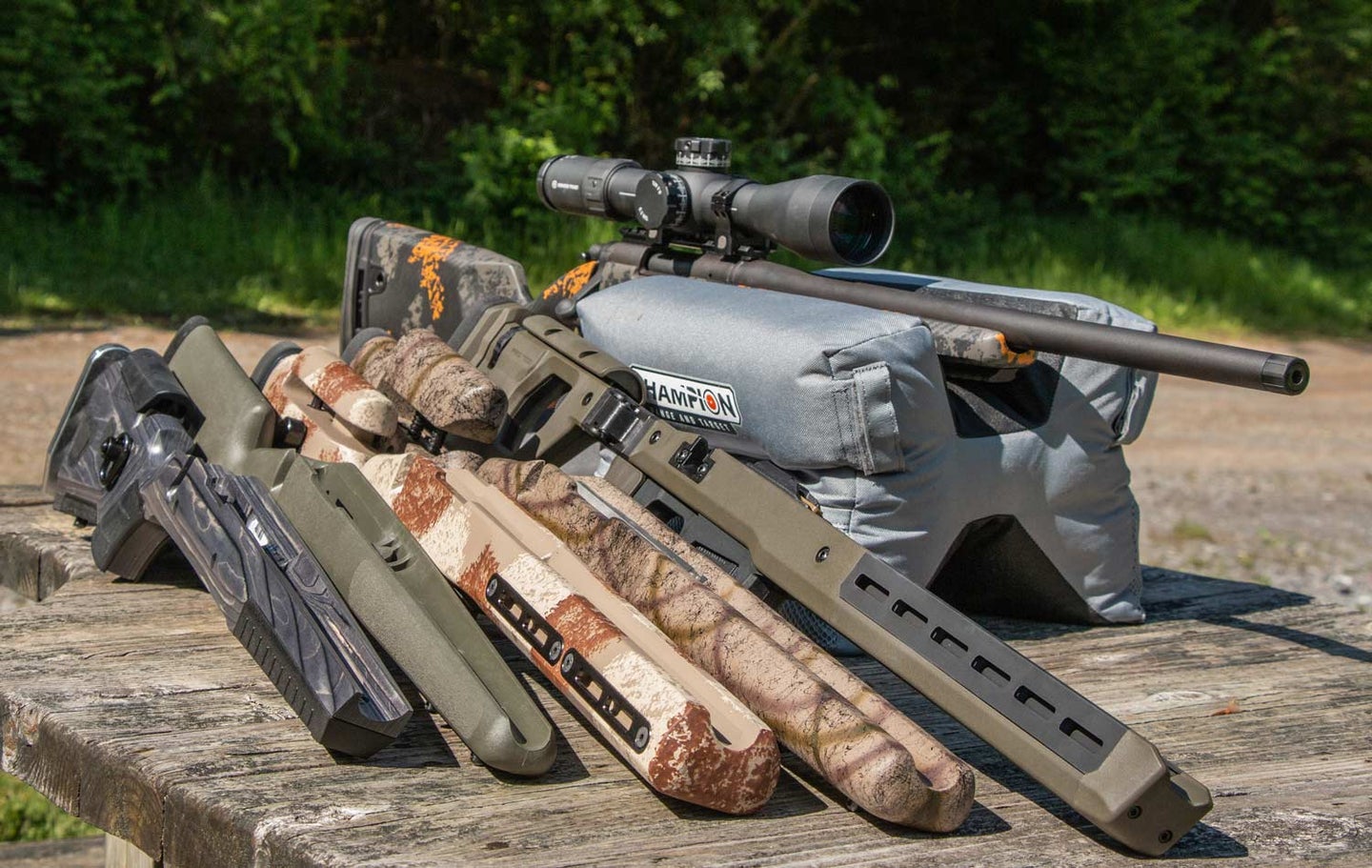 Once upon a time, a gorgeous .257 Roberts almost broke my heart because it wouldn’t group inside a snuff can at 100 yards. Desperate for a fix, I threw money at a new stock—and the rifle shot no better. Today, in the delirium of the current long-range craze, many hunters who don’t want to drop wads of cash on a new precision rig are buying drop-in stocks in an effort to turn old Betsy into a sniper rifle. In many cases, the stock maker’s marketing all but promises better accuracy.

Besides the prospect of tighter groups, aftermarket stocks typically offer more adjustability and a better shooter interface than most factory stocks. They can transform your rig for an entirely new role too, such as a specific type of shooting competition. Plus they give your old rifle a snazzy new look, and installation is a simple DIY project that you can tackle with the tools in your catchall kitchen drawer. The question is, will your rifle really shoot better with an updated stock? And is it worth the money?

To find out, I got my hands on a new Remington 700 SPS Tactical rifle in .308 Winchester and six aftermarket stocks ranging in price from a couple hundred bucks to about $1,000. After installing a Timney two-stage trigger and a Crimson Trace 3-18X50mm riflescope, I shot five 3-shot groups using Federal’s Gold Medal Berger 168-grain Juggernaut OTM load. The average group size from the factory rifle was a very respectable 0.92 inch.

Following the same protocol, I then tested the six aftermarket stocks on the same barreled action. All were easy enough to install, but my path to small groups had a few hurdles. Only two of the stocks came with action-screw torque information. For the other four, I had to call the manufacturers. And it damn sure matters; I intentionally torqued the screws on two of the stocks incorrectly, and the groups went the hell. Also, the front action screw supplied with one of the stocks was too long, and I had to shorten it to keep it from binding the bolt. Eventually, I got all the stocks properly installed and tested them on the range—and just like with my old Roberts, precision did not improve. Unsatisfied, I dug deeper.

After the initial group testing, I wondered how much a proper glass-bedding job might help. So, I picked two stocks—the two that delivered the worst initial precision, the Grayboe Ridgeback and the Gunwerks Magnus—and had my gunsmith bed them. After bedding, groups with the Grayboe stock went from 1.54 to 0.91, a 41 percent improvement in precision. The Gunwerks stock went from 1.52 to 0.72, a 53 percent improvement, with a best-of-the-test smallest group that measured 0.22 inch.

When it comes to shooting at long distance, though, it’s not just about precision. Rifle fit is also critical. That’s why length of pull, comb, and even grip adjustability are increasingly common features on dedicated precision rigs. They allow the rifle to fit you specifically, as opposed to the average human. Also important are accessory-mounting options for bipods and other gadgetry.

For the final assessment, I shot all of the stocks from the prone position, with a bipod, at 500 yards. This highlighted the interface advantages and faults of each. For example, whereas the nonadjustable McMillan MC3 delivered brutally uncomfortable recoil from the prone position, the Magpul stock, which has the most adjustability, fit me like yoga pants fit a yoga instructor. The Gunwerks Magnus was so comfortable that it seemed like I was shooting a .243 instead of a .308. In light of this, I would not buy an aftermarket stock that does not feature full adjustability.

Aside from the Federal brass I accumulated, there were some important takeaways from the experiment. First is that a rifle doesn’t need a fancy stock to perform well; the Remington shot sub-MOA out of the box, with a $150 Hogue stock. Second, you should not assume that merely bolting on a new stock will make your rifle print smaller groups. It might, but that fact that every one of the stocks I merely bolted on resulted in larger groups proves that you can’t count on it. Third is that if you want to get the most from an aftermarket stock, you should plan on spending the extra money—usually around $100—on a professional glass-bedding job.

Of course, the most immediate and noticeable advantage of a new stock is a slick new handle on your old hunting rig. Since life is too short to shoot an ugly rifle, that might be reason enough to write the check.

Here is a closer look at all six of the after-market stocks I tested, and how they performed.

Comments: A solid synthetic stock with a high comb and comfortable grip but no adjustability.

Comments: With adjustable LOP and comb, and multiple M-LOK rail sections, it looks and feels sniper-ish.

Comments: Excellent adjustability on this handsome carbon-fiber stock. Integral rail for a bipod.

Comments: This one is too heavy for most hunting situations, but it features the most adjustability of all the stocks tested.