A profile of “The Rifleman’s Rifle,” from its debut in 1936 to its current, and best-ever, form 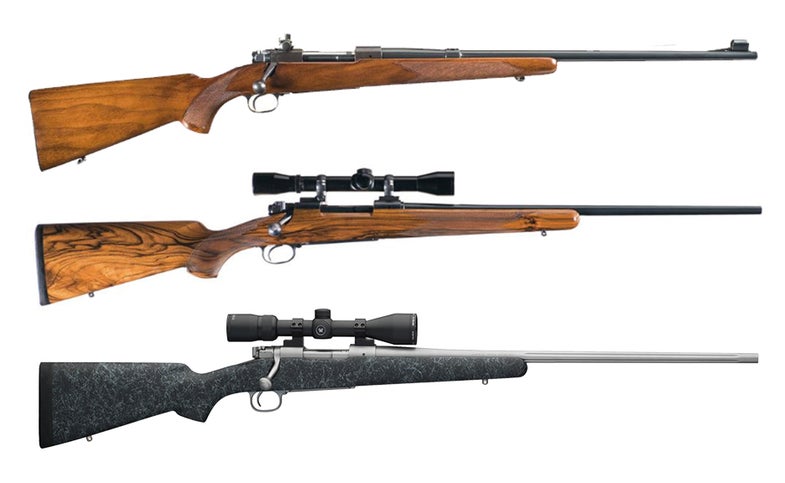 From top to bottom: A pre-64 Winchester Model 70, a custom rifle built on the M70, and a current-model all-weather version, with scope. Rock Island Auction Co. and Winchester Guns; collage by Dave Hurteau
SHARE

I have no idea who coined the term, “The Rifleman’s Rifle” to describe the Winchester Model 70, or what it actually means, but this iconic hunk of walnut and steel, which made its debut in 1936, has captured the imagination of the shooting public like no long gun before or since. It did not descend from heaven fully formed. Rather, it was a refinement of the Model 54, which was Winchester’s first successful bolt-action.

The 54 was a good rifle that stayed on the market for 11 years. It was, however, flawed. It had a heavy, two-stage trigger, a cheesy-looking trigger guard, and a general lack of elegance in its profile. Winchester thought that it could do better, and they not only did that, they struck fire in the process. In its heyday the Model 70 was probably aspired to by more shooters than any other rifle.

It was a complex piece of machinery, and it had the great good luck to be introduced in 1936, which was the depths of the Depression. On the one hand, it was expensive, and not many hunters could come home from a day on the breadline and plan how they were going to get the $60 or so* that a Model 70 cost. On the other hand, the Depression guaranteed that a supply of skilled machinists, which is what it took to build one, was always available, and for low wages.

The Makings of an Iconic Bolt-Action

What did the Model 70 have? There was a certain “feel” to it that was very rare among rifles. It felt good; it felt solid; it felt like you were going to hit what you were aiming at.

The action had a glassy smoothness to it that you simply don’t encounter in today’s rifles. New from the factory, a Model 70 cycled as though it had been used for 25 years. It was nothing more than a refined Model 98 Mauser, but it shared the Mauser’s reliability.

Was this all? No, it was not. The Model 54′s double-stage trigger was replaced with a single-stage that was truly a work of genius. It has the simplicity and ruggedness of a military trigger, but can be fine tuned to a let-off that endears it to target shooters.

And finally, it had the lines. No one can define this, but all you have to do is look at a rifle with good lines and you know it. It’s no accident that the Model 70 has served as the basis for more work-of-art custom rifles than any action except the Model 98.

The Model 70 also got great press. At just about the time it came out, Jack O’Connor was coming into his full flower as a gun writer, and Townsend Whelen had been considered the dean of the profession for some time. Both of them loved the Model 70, and said so, often and loudly, and for years.

And so the Model 70 flourished and was made into all sorts of configurations. There was the Super Grade, which had a deluxe stock, and the Alaskan, which came in .338 and .375 and had a rubber recoil pad. There was the African in .458, and the Featherweight, and the Westerner, which was chambered only in .264. The roster of calibers for which the Model 70 was chambered was legion.

So iconic did the Model 70 become, and remain, that collectors began buying it, and where collectors gather, counterfeiters are sure to follow. There is a lot of fakery involved in old Model 70s, and if you want to invest in one, you better be sure of what you’re getting.

Was the Model 70 perfect? Not when judged by today’s standards. From the get-go, just about all of them were heavy. A standard model, with a 4X scope aboard, was likely to weigh 10 pounds. Jack O’Connor never used factory Model 70s; he took them to his favorite custom gunmaker, Al Biesen, who put them on a drastic weight-loss regimen. At the time, people were not bothered by 10-pound rifles, but that would not fly today.

Were they accurate by today’s standards? No. Relying on my memory, which is a risky proposition, most off-the-shelf Model 70s would put five shots into 2 inches. If you had a rifle that would group 1½ inches, you had a real treasure. Barrels were not as good then, ammo was nowhere near as good as it is now, and the factories didn’t know nearly as much about bedding for accuracy.

But the real problem was the complexity of the Model 70. With the onset of World War II, Winchester halted production of all its sporting rifles and switched over to military arms. But with the end of the war and the boom in America’s economy, the market for skilled machinists opened up, and the people who had made Model 70s discovered that there was a lot more money to be made elsewhere.

Remington had seen this coming and developed whole “families” of rifles and shotguns that were easy and cheap to produce, but Winchester did not. They were stuck with worn out machinery and machinists who left and could not be replaced. And everything they made suffered, including the Model 70.

As Remington had done in 1948, Winchester, in the early 1960s, designed a whole new line of firearms that could be made easily—and it was a disaster. The guns were nowhere near as good looking as before, and by and large, they didn’t work. The new Model 70 came in for particular hatred, some of which was undeserved. The fateful year when it was introduced was 1964, and so the old guns will forever be known as “pre-64 Model 70s,” for which there has long been and remains a following akin to cult-worship.

(There is a heart-wrenching tale about the transition from old guns to new that was told to me years ago. Winchester brought in a CEO named George Chandler, who had a stellar record in other parts of the Olin Corporation, and who was charged with turning the company around. Chandler was a very bright and dynamic guy, but he knew not from firearms. When the first tool-room sample of the new Model 70 was finished, Chandler had it put on a table with one of the old guns next to it and asked the shop foreman what he thought of the new gun.

This fellow, who had been with Winchester for years, and was a hunter and a shooter, swallowed hard and said, “Mr. Chandler, it’s a terrible rifle.”

But the story ends happily. Winchester turned its gun production over to Browning, which is owned by Fabrique Nationale of Belgium—and if there’s one thing FN knows about, it’s how to make rifles. FN started fresh. They had Model 70s made in their state-of-the-art plant in South Carolina, and when the Model 70 design met up with 21st century machinery, it was a match made in heaven. Current Model 70s (which are now made here, and assembled in Portugal, and imported as complete rifles) are as high above the originals as Heaven is of Hell. The only design change of which I’m aware is the trigger. The old one was scrapped in favor of a far newer design called the MoA that is much easier to adjust, and gives an excellent pull.

The new guns are far lighter, and will shoot rings around the old ones. They’re not cheap, but then Model 70s never were. If you have an old Model 70, don’t stick it in the closest, or trade it for something newer. And for God’s sake don’t alter it. Use it. Enjoy it. Worship it reverently, as it deserves. It’s an icon.