What Makes the Perfect Battery of African Hunting Rifles

Sure, you could bring any old rifle to hunt in Africa, but these have style—and five- and six-figure price tags to match 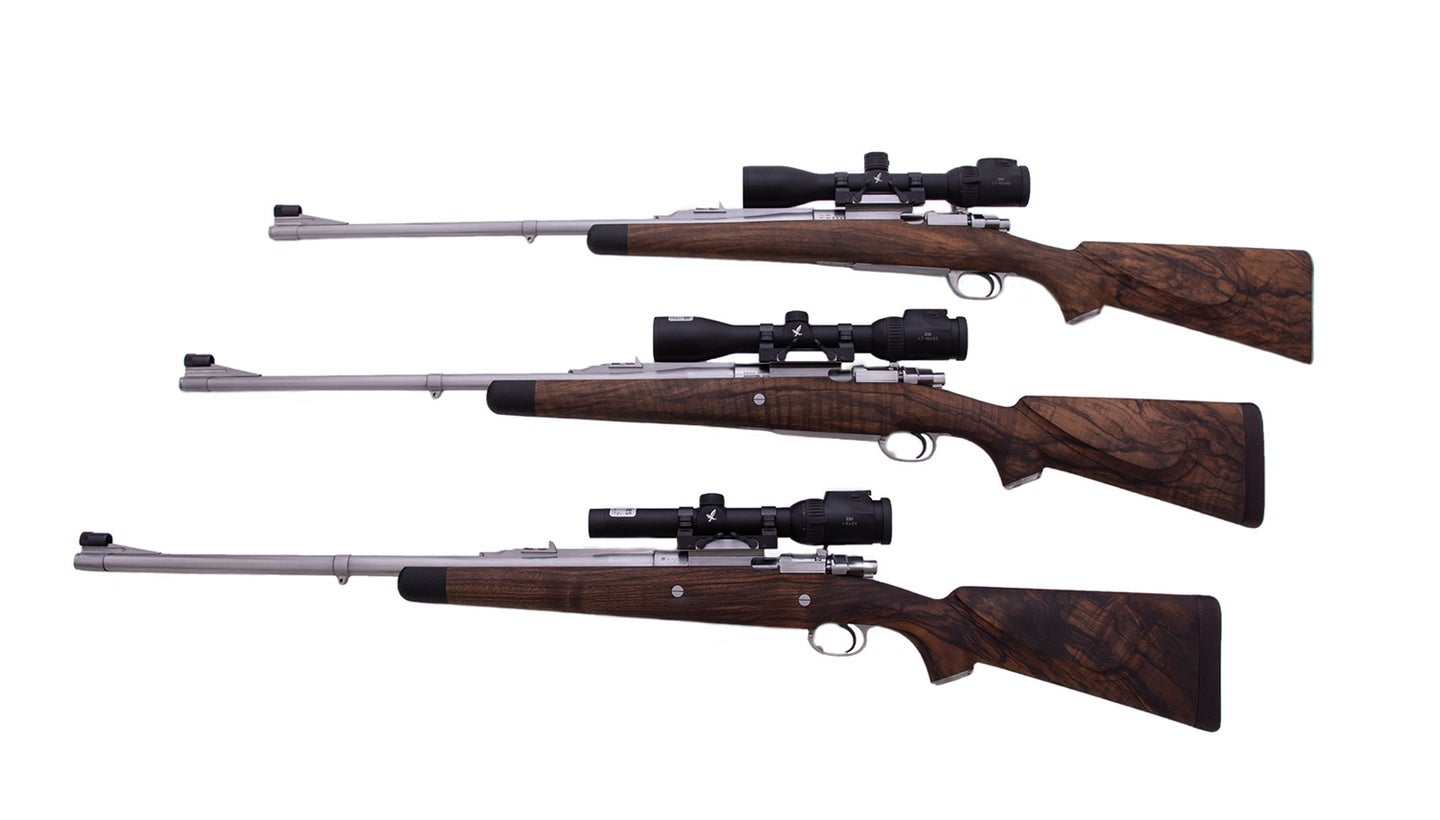 Among the detritus left in the wake of the COVID pandemic were two trips to Africa that I had planned. I was hardly alone in this. Pretty much every hunter who had booked an international trip had to cancel. Though the virus defeated my ability to physically set foot in Africa, it wasn’t able to confine my imagination. And whenever I think about Africa and hunting, invariably my mind goes right to great African calibers and rifles.

That line of thought got a boost last week with a couple of announcements. One was from the folks at Griffin & Howe, who have spent their time in lock-down building a couple batteries of great African rifles. One was a trio of sporters built on pre-64 Winchester Model 70 actions, chambered in .270 Win., .300 Win. Mag., and .375 H&H. All are stunners. They are stocked with exhibition-grade Circassian walnut with ebony fore-end tips. They come with 24-inch Bartlein barrels turned to a contour specific to G&H. They have barrel bands, of course. And though each of the rifles comes scoped with high-end Austrian glass—Swarovski’s Z6i 1.7-10×42, which is a great all-around African scope—they also have open sights with two leaves that are regulated at 100, 200, and 300 yards on the .270 and the .300, and at 50, 100, and 200 yards on the .375. Be still my beating heart.

As nice as those are, however, the rifles that really caught my eye were the three Griffin & Howe guns built on Mauser actions. They were stocked, sighted, and given barrels similar to the pre-64s, but they were chambered in 7×57 Mauser, .300 H&H, and .404 Jeffery. I’m not sure it is possible to assemble a more classy trio of cartridges.

Most of the rifles were snapped up the day they were announced, despite sporting price tags somewhere around $41,000 each. Before you spit up your beer, consider that the wood alone for the stocks is about $4,000 per gun, the scope and mounts add another $3,000, each rifle came with its own custom made knife with handles made from the same walnut blank as the stock—another $2,500—and that the whole thing is presented in a custom presentation case worth a pretty penny as well.

Even though the rifles are all well out of my reach—I can’t tell you how hard I’m lusting for that .300 H&H—those extras do make the price tag easier to digest.

It seems like every rifle maker is backordered these days, with wait times stretching into months. Not to be outdone, the gents at Holland & Holland have basically said hold my Pimms and watch this, as they’ve taken to making an announcement every time a single gun is completed.

Their latest is a “Round Action” double rifle chambered in .500 Nitro Express can be yours for the princely sum of £98,925, which comes to $137,733.28 American. When you check out online you can round up to the nearest dollar if you want to donate to Prince Charles’s polo pony fund.

Of course, one pull of the trigger will knock the snark right out of you. Like many of the Nitro Express cartridges, the .500 NE can trace its origins to mid-19th Century England, when gun makers were trying to keep their royals and lords from being reduced to wet greasy spots on the African landscape. Stuffing brass with large-diameter bullets and lots of black powder was the go-to strategy. The original .500 NE had enough horsepower to drive a 440-grain bullet at about 1,500 fps, generating just shy of 2,200 foot-pounds of energy at the muzzle.

Once smokeless powder came on the scene, the NE cartridges all got a performance boost. Gunmaker Westley Richards is credited with debuting the souped-up .500 NE back in 1890. Today, Hornady loads 570-grain DGS solids that step out 2,150 fps, bumping the muzzle energy up to a stout 5,850 foot-pounds—enough to properly flatten buffalo, elephant, rhino, and the like.

Personally, I’ve always been partial to the .416 Rigby. In fact, on my first four trips to Africa, it was the only rifle I carried, and I used it on everything from Cape buffalo down to duiker. I did eventually expand my horizons and have carried rifles chambered in .30-06, .204 Ruger (for predators and small critters), .375 H&H, and the 6.5 Creedmoor.

One reason why hunters and gun writers love to opine on the best cartridges for Africa is, because there’s no one correct answer, though that doesn’t stop any of us from voicing our opinions, which is exactly what I’m going to do.

First off, from a practical standpoint, a three-gun battery is a pain in the ass. Yes, it’s what lots of hunters took back in the day—but that was the era of porters and no baggage fees. A classic three-gun battery would check the boxes for heavy, medium, and light work. If I were so inclined, I’d probably opt for a .470 NE for the big stuff, a .300 H&H for the medium game, and, just to mix it up a bit, a .220 Swift for my light gun. All are old, established cartridges and would thrive in the mopane.

But I’m going to limit my battery to a pair of rifles, so with that in mind, and assuming I’m chasing dangerous game, I’m going to bring my .416 Rigby and a .280 Remington. The Rigby will be loaded with 400-grain Nosler Partitions for the buffalo, and backed with some solids in case things go south. For the .280, I’m partial to the 140-grain Accubond, which is as lethal as they come.

If for some reason, those old cartridges don’t roll your socks up and down, and you want to go with rifles chambered in something of more recent vintage, then I’d suggest a 375 Ruger and a 6.5 PRC.

The 375 Ruger is almost criminally underrated. It was introduced in 2008, in the midst of a frenzy of new cartridges, and sort of got lost in the mix. It’s based on a rimless and beltless case of original design, and duplicates the performance of the 375 H&H. I’ve used it on a couple of brown bear hunts in Alaska, and found it to be both accurate and deadly.

Hornady loads it with a number of good bullets. For thick-skinned dangerous game, you can go with the 300-grain DGS solid. The 300-grain DGX bullet—which is a bonded bullet that expands—can handle anything short of an elephant, and is a great choice if you want your projectiles to plow through several feet of hide, meat, and bone and pop out on the other side. It also comes loaded with 270-grain Interlock soft points or the 250-grain GMX, which is a tipped monolithic bullet made from a copper alloy.

Read Next: The Fastest Dangerous-Game Rifles

The 6.5 PRC has become a favorite all-purpose big game round of mine over the last few years. It is similar to the 6.5 Creedmoor, but brings more horsepower to the party. It typically shoots about 150 to 200 fps faster than the Creed and would be a great choice on any plains game animal. It shoots flat, it is typically very accurate, and those lovely 6.5 mm bullets punch above their weight class thanks to their high sectional densities, meaning they will penetrate deeply and get to the vitals.