Active Duty Marine Starts a Decoy Company Unlike Any Other 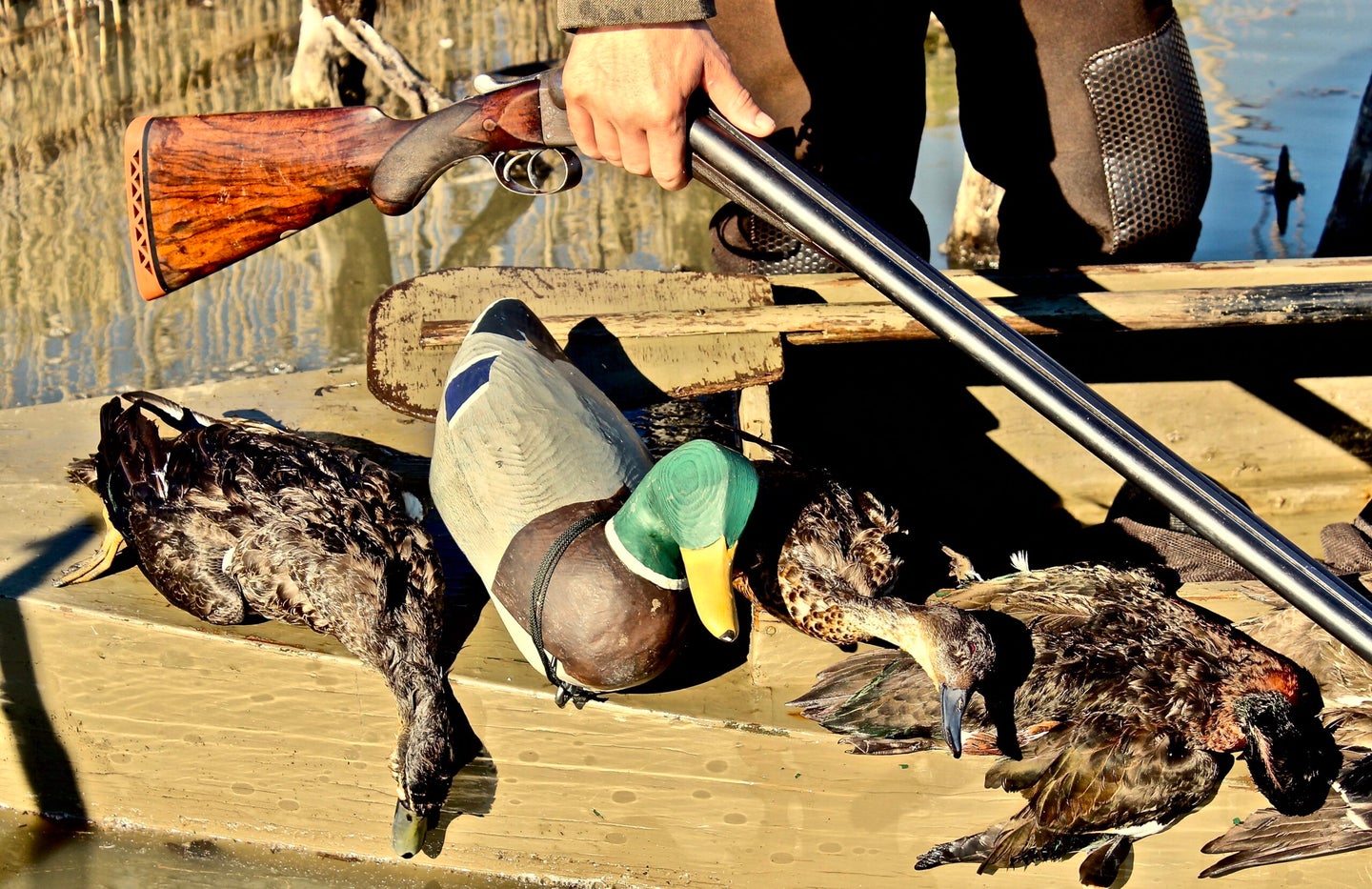 You really only need three colors to paint a canvasback decoy: black, white, and burnt sienna. I know because I have one clamped in my bench vise by the rudder, and I’m brushing on coats of paint in between the other things I have to do today. It’s a nice break to feel a paintbrush run over the grooves of wood grain and to paint a simple blocky pattern on the fake duck. But this duck isn’t made of wood and I didn’t carve it. It’s a polyurethane foam replica of a carving made by a company called Dixie Decoys. The difference between it and other foam decoys is that it looks like it was made 100 years ago.

Carving your own decoys and killing ducks over them is one of the ultimate hunting achievements—right up there with calling a gobbler with a homemade wing-bone call or killing a deer with a self-bow. There’s just another dimension to building your own hunting tools and watching them work.

But somewhere along the line, the majority of duck hunters broke away from simple wooden-block decoys in favor of more convenient modern decoys. There are carvers here and there, and a handful of duck hunters who do still care for and modify decoys, but the idea of a hand-made, hand-painted rig is largely something of the past.

How Realistic Do Decoys Really Need to Be?

If you ever have the chance to talk to Sanders, you’ll find out just how deep the history of decoy carving goes. He talks about decoys with an energy that lets you know he’s pretty much obsessed. He also geeks out over historical decoys, like those of carver Lee Dudley, and uses words like “sleek” and “sexy” to describe them.

But Sanders isn’t concerned with collecting antique decoys or the world of competition carving. He doesn’t care about things like ribbons or hyper-realistic replicas of birds. He’s interested in how a block of wood or a piece of foam can fool a duck into flying down for a closer look. Sanders’ company makes hard-working gunning decoys that he feels are both practical tools for modern-day duck hunters and a link to the history of waterfowling.

What sets the Dixie Decoys Heritage Series apart is that they look like they belonged to a market hunter from the early 1900s. The body styles don’t feature perfectly-rendered feathers or even eyeballs. Instead, they have a rich wood-grain texture and are contoured to suggest a duck rather than replicate it. They also come blank with no factory color scheme. It’s up to the hunter to paint the decoy, and Sanders feels that is important.

“The Heritage Series has certainly experienced its fair share of skepticism,” Sanders says. “We find that most criticism comes from people who aren’t as interested in the history of the sport as nerds like us are. This debate, however, misses the point of the Heritage Series’ design. Where other companies make decoys to look like photorealistic reproductions of ducks, we take a counterintuitive approach and make decoys that look like old duck decoys.”

Sanders points out that during the days of market hunting and for years after, ducks readily cupped their wings into rigs of simple wooden blocks that didn’t have eyes or realistic plumage. These decoys were painted and repainted, mostly in solid colors, and then passed down from generation to generation.

“The science behind what ducks ‘need’ or ‘prefer’ in terms of a decoy is sparse,” he says. “In the absence of scientific research, we have to look at what history tells us. Photorealism and texture, perfectly painted eyes, and flocked heads are very modern phenomena. One could make an argument that those features are added to attract hunters, not ducks.”

A Link to the Past and the Future of Waterfowling

Under the hood, Heritage Series decoys are as modern as any of today’s high-end models. If you’re into cars, think of one as a vintage Corvette with a fuel-injected LS motor. “Our focus is to give hunters a direct and tangible connection to their gunning heritage with all of the advantages of a modern decoy,” Sanders says.

The decoys are built around a metal keel, which is held in place by a magnet during the molding process. As the foam is injected into the mold, it encases the keel to protect it from the corrosion—except for the dime-sized area where the magnet was, which can be filled in later with caulk. The diver models have hollowed-out vacuum cavities on the undersides to help them stabilize on rough water and prevent them from bobbing unnaturally. The heads (which are also sold separately) are made of a more flexible foam than the body to resist breaking, especially in the bill area. All of this adds up to a block that can take plenty of abuse and keep on floating.

Sanders wanted his decoys to be tough because he sees them as heirlooms, just like the wooden gunning decoys of years past. He wants hunters to be able to paint them, hunt over them with their friends and family, and then pass them down when the time comes. They are pricier than hollow-bodied decoys, but they might be the last decoys you’d ever have to buy.

In June of 2017, shortly after Dixie Decoys was founded, Sanders was stationed to Australia to help train the Australian military. “My family and I left right as we received the first prototypes of the Heritage Series,” he says. The timing was tricky but with his brother-in-law running company operations in the U.S., they started fulfilling their first orders. Still, Sanders had yet to kill a duck over one of the new decoys.

“When the R&D process was complete and we finally launched the decoys for sale, the duck hunting season in Victoria, Australia, was just a few months away. So, I prepared my first production copies of the Heritage Series not as a North American species but as Pacific Black Ducks and used our Pintail to create Australian Mountain Ducks, otherwise known as Chestnut Breasted Shelducks.”

Sanders linked up with some local Australian waterfowlers to help him find a place to hunt. Together they took the new hand-painted decoys and hit the marsh.

“The first duck I shot over the Heritage Series was a Grey Teal on Lake Wellington in Victoria. I remember the moment as the ‘mob,’ as the Aussies call them, of teal shot out of a protected marsh at our backs and overhead. My guide, Sam Tyler, gave a short blast on his call and turned them hard back into our fakes. I took two shots and downed my first Australian duck and my first duck over our decoys.”

Sanders continued to hunt with the Aussies and eventually produced a short video series on YouTube called Dixie Down Under about what waterfowling is like in Australia. One major difference between hunting waterfowl in Australia and the U.S. is that there are far fewer Australian duck hunters. As a result, they are constantly at odds with a strong anti-hunting lobby, and each year their season is in jeopardy.

“What’s happened to the Australian waterfowling community should serve as a warning to us as to what could happen if we don’t protect our sport,” he says. “Most states in Australia do not allow duck hunting anymore, and in the ones that do remain, it’s always under attack. When the season comes around, protesters are actually allowed in the swamp with hunters wearing hi-vis vests, blowing whistles, and waving orange flags. Luckily, I haven’t had to deal with that myself, but all the guys I’ve hunted with have.”

Painting as Part of the Hunt

Sanders feels that hand-painting decoys is another way to keep the tradition of waterfowling going. He says that each time you paint your decoys it’s like adding another page to your story as a duck hunter. From the first coat you lay on, to the touch-up you do every summer, repainting becomes an important ritual. It’s also a way to involve kids in another dimension of the hunt that goes beyond the few months of duck season.

With recent reductions in bag limits in the eastern flyway and fewer and fewer opportunities for average duck hunters, keeping younger waterfowlers involved is becoming harder.

But one of the things that might help duck hunting stay relevant is the tools of the trade. Learning to craft a homemade blind or maintain a shotgun are rites of passage, and for a long time, making and maintaining decoys was, too. It’s a job that youth hunters can easily take on, and it gives them another way to actively participate in the hunt. Painting decoys is also a lot of fun. And, while most people would find it hard to afford or difficult to make a set of hand-carved wooden decoys, Dixie Decoys lets hunters take part in a similar tradition.

I pulled the canvasback out of the vice and got ready to paint another decoy—this time a puddle duck block. This one will be a mallard drake, and later I plan to paint a whole rig of mallards. It’s a little harder than the canvasback, and along with the paint guide, I look at pictures of mallards online in various positions to get the colors and patterns right.

But as tricky as it is to get the patches of blue placed where they need to be for the speculum feathers, it’s probably the most satisfying part to paint on the bird. And even though I’m not waking up at 4:00 a.m. and heading to a blind, my head is still involved in trying to fool a duck. I can’t wait to see the whole spread finished, hear them hit in the water on opening day, and hopefully pull the trigger on my first greenhead over a decoy that I painted myself.