Want to bag a post-rut buck? Your best chance is to find out what he’s eating first 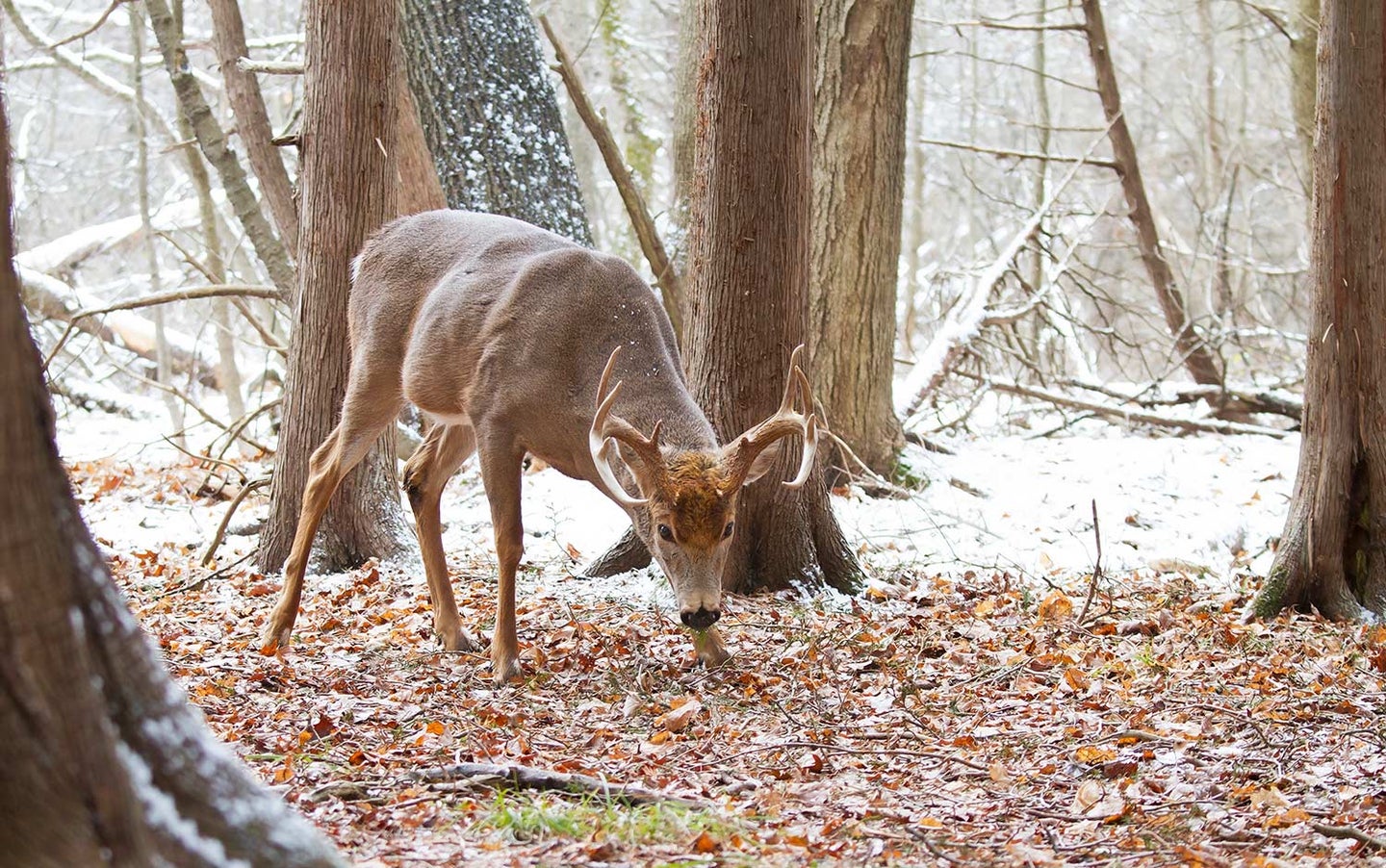 A hungry late-season buck paws for acorns after the rut. JimCumming via Deposit Photo
SHARE

Knowing what deer are eating is important throughout the fall, but in the late season, it’s pretty much the entire ball game. During the rut, grabbing a bite to eat was an afterthought for bucks, but right now and in the weeks to come, choosing a prime food source is key to their survival. Sure there’s some secondary breeding happening, and bucks are still banging antlers and posturing to prove who’s boss. But this is all happening at, or around, the best food sources in the area.

This makes late-season whitetail hunting relatively simple. Not easy, necessarily, but simple. As winter settles in, even mature buck go on a feeding binge like no other time of year. So success in the late season is truly as straightforward as this: Find the food and you’ll find the deer. It’s so important now that it’s more than worth your while to give up a day or two of hunting to pinpoint exactly where deer are feeding. With that in mind, here are the nine whitetail foods that are most likely to put you onto a great late-season buck.

If I had to nominate a most-overlooked winter food it would be the acorn. They’ve been dropping since the beginning of fall, causing many hunters to think the show is over. But unless you hunt where oaks are rare, or the crop was particularly poor, there are still plenty of nuts around. Don’t expect to find many white-oak acorns now, though. Instead, concentrate on red oaks, which frequently throw a bigger crop that can last through winter and into the following spring.

Spend a couple midday hours looking for stands of tall, mature red oaks, especially on ridge tops. Oaks are easy to spot this time of year, as their brown leaves are often the only foliage still clinging to the otherwise bare trees. Identifying which oak flats or individual trees deer are hitting hardest is usually a piece of cake this time of year, too, as you’ll spot lots of obvious feeding sign, with leaves churned up and pawed at. Basically, if you’re not saying, “Wow, deer are hammering this spot!” you should probably move on. You may see a rub or two nearby, as well, confirming that a buck or two are among the deer visiting the area. If there’s snow, the mission is simplified further, with the added benefit of trails that indicate how deer are approaching the acorn buffet.

This was one of my early-season picks, but I’m including it here because I’ve seen December deer ignore corn and soybeans to dig through a foot of snow and feed in a newly seeded alfalfa field. Alfalfa is extremely high in protein, and a fresh field must still maintain its flavor because deer devour the stuff. I’ve accessed previously un-huntable farms because I’ve asked permission to hunt winter deer digging up new alfalfa. Farmers are often more than happy to let me hunt, especially if I’m willing to take a doe or two.

Apples are another mast species most hunters associate with early fall, but they can be a huge draw in the post-rut. I hunted a farm for many years with a small orchard, and there were a half-dozen trees that held apples well into winter. The trails beaten to those late-bearing trees were always impressive. And don’t forget crab apples. While deer often ignore these tart little treats in early fall, they will devour them during the late season.

If I were forced to pick only one ag-species row-crop to plant in a food plot, it would be soybeans. In addition to being high in protein, soybeans grow relatively low to the ground and are lightly attached to the stalk. This makes it easy for deer to inhale a pile of them with very little effort, and winter whitetails are all about efficiency when it comes to eating. On the flip side, beans can get buried in deep snow, and if there are easier food sources around, deer might ignore them.

Read Next: How to Plant the Perfect Half-Acre Food Plot for Whitetail Deer

If ever there were a food plot seed perfectly designed for the winter, brassicas (the seed category that includes rape, kale, turnips, and radishes) are the ticket. For starters, deer largely ignore the leaves in summer and early fall, making them a perfect choice for a small plot in an area of high deer density. But after those leaves get hit with a frost or two, deer are all over them. Brassicas also provide more sheer tonnage of food per acre than almost anything. One warning: You’ll need to rotate your food plots, as planting brassicas several years in a row will result in disease or decreased production.

Corn is an obvious food source for farm country whitetails, but it’s far from being a no-brainer. Standing corn looks like an easy buffet, but in reality, chewing corn from a cob is kind of a chore for deer, and in most cases, they prefer the kernels on the ground. This makes a picked (but not plowed) cornfield even more attractive to whitetails. Still, in a winter that features plenty of standing corn, hunting the standing crop is the only option. In my experience, this works best when temps really plummet and deer don’t have a lot of choices. Another tip: Whitetails often prefer smaller plots located close to bedding cover.

Read Next: 10 Early-Season Deer Food Sources to Focus On

Woody browse is a highly overlooked food source in the food plot era, and it’s actually the stuff that whitetails evolved to eat to sustain them through the winter. It’s their go-to choice, sometimes even when better-looking, easier-to-access sources (like food plots and farm crops) are available. If you’ve got poplar or maple saplings, young white cedar, or Douglas fir growing in your area, ignore them at your peril now. Deer thrive on eating these native species, which often grow close to bedding zones, so whitetails will focus on them when they’re feeling pressured, or if warmer winter temps don’t motivate them to visit other food sources.

When most hunters think “browse,” they focus on young trees, but there are more options. Japanese honeysuckle, dewberry, dogwood, blackberry cane, and Oregon grape are all examples of regional species that are highly favored by deer—and most of them can last well into the winter. In my area, honeysuckle leaves not only remain green during the late season, but the dense stands also provide bedding and security cover for hungry whitetails.

Whitetails are experts at selecting foods that provide just the nutrition they need at a specific time, and some of these food sources are ignored for much of the year. In northern states, sumac “candles”—the red flower atop a woody sumac stem—are like deer candy now. Even better, they frequently grow on the brushy, south-facing slopes that whitetails prefer for bedding, especially during cold snaps. In the lower Midwest, honey locust pods, which deer often step over as they travel to farm fields, suddenly become a preferred food in December. Keep an eye out for quirky food sources in your area, and you might add one more hotspot to your late-season deer lineup.

Scout Late-Season Food Sources From Your Truck in Farm Country

I live in ag country, and virtually all my neighbors are farmers. I love them as a whole, but I reserve a special fondness for those who eschew fall plowing. Here in the Midwest, some farmers dismiss those who don’t leave black dirt in the wake of the harvest as lazy, but I view them as a conservation god-send, because they are not burying waste grain that wildlife can feed on in winter. Harvested but unplowed cornfields are easy enough to spot and are more likely to keep drawing late-season deer.

Keep an eye peeled for harvested soybean fields, which are typically untouched by plows. Also, more farmers are vertical-tilling their cornfields, which doesn’t have near the impact of the typical plowing/discing that leaves fields black and waste grain buried. Often I can scout a potential field by simply glassing it from the comfort of a truck, but a quick tour of the field edge at midday will reveal whitetail activity and the best stand sites.

In the odd year when weather prevents or delays the harvest, I spend time driving around looking for any fields that got a reprieve from the combine. It’s surprising how often a farmer will grant permission to hunt a standing grain field in December that he’d deny access to only a month before.

How to Hunt the Best Late-Season Food Sources

In most ways, hunting late-season grub is just like hunting food sources any other time of year. You need to figure out how deer are approaching the feed, set up downwind and within shooting range, and make sure you can get into and out of your stand or blind without spooking the deer you’re hunting. All of that is tough enough no matter the season, but there are a few additional challenges now.

First, if you find a really hot late-season food source, it is probably drawing lots of deer, which means you’ll have that many more eyes, ears, and noses to see, hear, and smell you. When setting up, start conservatively and be extra careful about not hunting iffy winds. Get into your spot early, be extra quiet about it, and do whatever you have to not to spook deer on your way out.

Second, the best food sources can change in a flash now, say, when a farmer finally gets the conditions needed to cut a field or deep snow suddenly blankets ground-level grub. Scout regularly to find the hottest food and when you do, hunt it immediately (as long as the wind is right) by using a climbing stand or doing a hang-and-hunt.

Third, weather is more important than ever now when it comes to buck movement. Pressured late-season deer, especially big bucks, will be naturally reluctant to hit open food sources like ag field and plots during daylight. But when the mercury plummets or the snow falls, they will throw caution to the wind in order to fill their bellies. So keep a close eye on the weather, and the worse it looks, the more you need to get out there and be waiting when that hungry bruiser steps out.