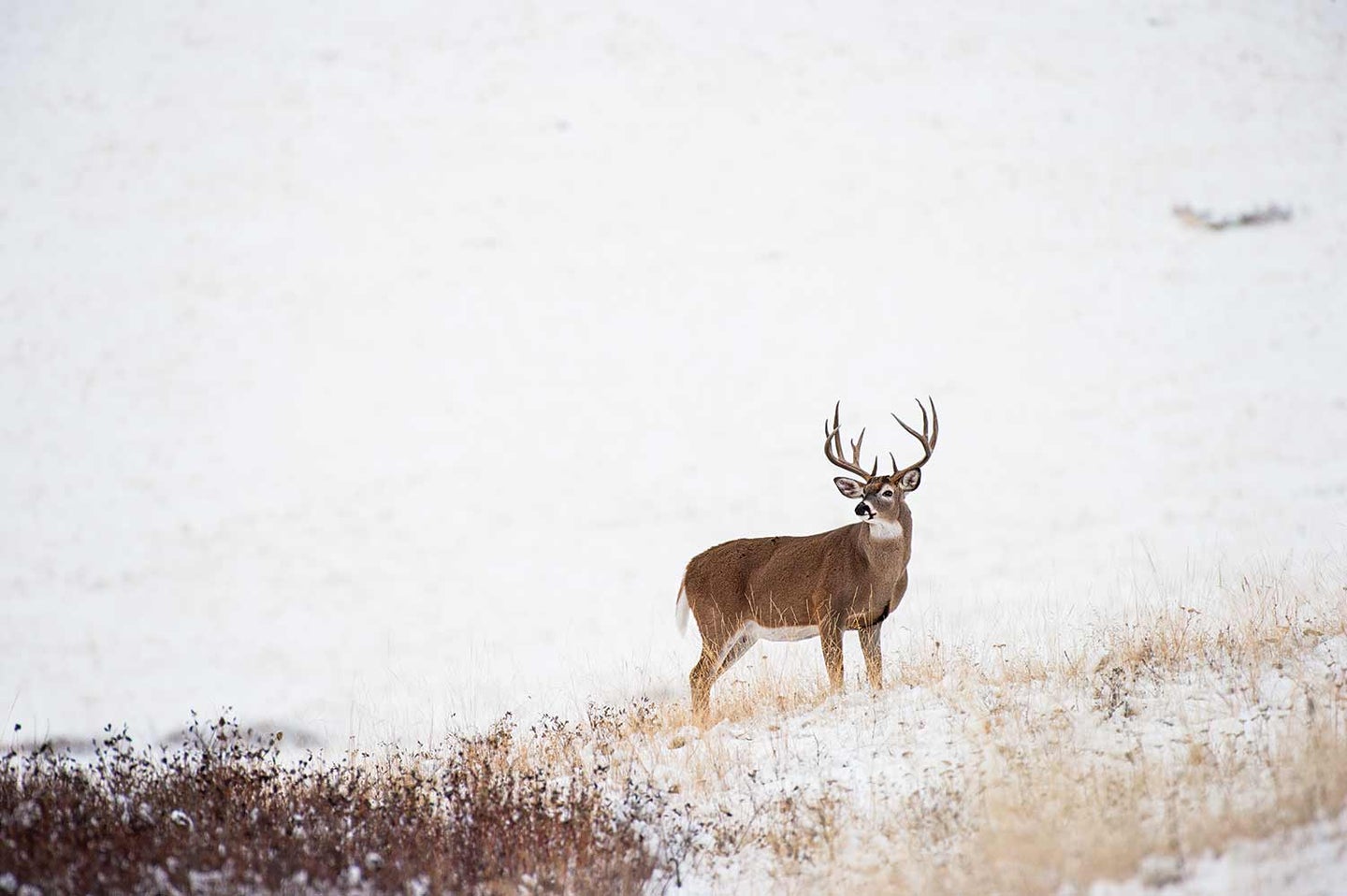 Ask the country’s best whitetail guides, and they’ll tell you that the late ­season is a killer time to drop a great buck. They’ll also tell you that when the mercury plummets, even the wariest deer will hit the best food sources during daylight. They’ll tell you where to set up, what to bring, whether to rattle or call or use a decoy, and even how far to shoot.

How do we know all this? We asked.

F&S surveyed dozens of top deer guides to pick their brains on late-season buck behavior, top tactics, favorite gear, and more. Some answered anonymously, most gave their names and outfits, but all offered expert tips and advice to help you wrap up your season with a wall-hanger.

Where is a big buck most likely to bed in the late season?

True or false: Given the bedding behavior of late-season bucks, hunters should skip the morning hunt now.

“Go ahead and hunt mornings if you want, just make sure you go to a different location from where you’d sit in the evening. A south-­facing slope in mature white-oak timber would be my first choice.” —Kevin Small

“Unless you are getting a consistent pattern during the morning hours from a particular buck, you’ll probably do more harm than good by hunting the morning, because you’re apt to bump deer. Sometimes it pays to sleep in and head out just before lunch, then sit the rest of the day. When the temperature and weather conditions are right, deer will start heading to evening food sources very early, and you want to make sure you’re there before they ­arrive.” —Zach Jumps, Harpole’s Heartland Lodge

“I like a rising moon in the ­afternoon.” —Anonymous

“I performed a study of more than 1,700 hunts, including all eight moon phases, and found no correlation between whitetail movement and moon phase.” —Anonymous

Is there really such a thing as the “second rut”?

“We always see a flurry of mature buck activity during the second rut. All it takes is one receptive doe, and you can have every buck on your farm after her. Hunt scrapes just ahead of the second rut, then try intercepting a buck on the downwind edge of prime doe bedding areas.” —Zach Jumps

“Estimate the peak of the primary rut, count 28 days later, and mark the ­calendar. Not long ago, I killed a mature buck chasing a hot doe on December 4.” —Kevin Small

“Doe-in-estrus scent works better in the second rut than at any other time. Use it.” —Tim Clark, Red Dog Outfitters

What is the very best late-season food source?

“It’s critical to have a variety of food sources in the late season. Too many people concentrate on having just corn or beans. Make sure to have greens as well. If you get some warmer temps, deer will often take greens over grain. I prefer radishes and turnips then.” —Joel Artis, Buffalo County Outfitters

What is the most important factor for getting late-season bucks on their feet before daylight?

“Cold temperatures are ­essential for getting deer to show during daylight now.” —Keaton Kelso, K&K Outfitters

“Low temps with a rising moon and high pressure is perfect.” —Joel Artis

“Having a good food source to hold the doe population is key. When one of those does goes into heat, the bucks are sure to show up.” —Mark Clifford, Premier Outfitters

“There’s nothing I’d rather do than track a buck in the snow!” —Randy Flannery, Wilderness Escape Outfitters

What is the best way to exit a late-season food-source stand without spooking deer?

“Realistically, no one is going to wait until dark-thirty in December after already freezing their butts off. If you can get a ride, do it; the deer are used to us coming and going.” —Tim Clark

Describe your favorite late-season tactic that most hunters would never think of.

“Tracking and stalking. Head to the big woods and hunt on your feet. It’s a hell of a lot more fun than sitting all day.” —Randy Flannery

“Spot a buck and watch his evening travel route. Then get out there the next day and brush up a good hide at a pond dam or in a fence line to intercept him. Throw him a curveball.” —Tony Sehman, Thunder Ridge Outfitters

“Pull a shallow plow over turnips and beets to bring them on top of the soil. Then hunt.” —Bryan Dawes

“Hunt the bedding areas that receive the first sunlight of the day. That warm sun is a magnet for bucks now.” —Mark Clifford

On a late-season hunt, I see a non-hit-list buck that’s obviously wounded. Do I kill him or do I go ahead and let him walk?

“Depends on the severity of the injury.” —Tony Sehman

Everyone wants cold weather in the late season. What do you do when it’s warm?

“We had a client kill a 196-inch buck two years ago when it was 58 degrees—in January. As he stepped out of the truck, I said, ‘Hey, kill a monster.’ He laughed and said, ‘Yeah, right.’ He called me two hours later and said, ‘ I just shot the buck of three lifetimes.’” —Tony Sehman

Should you rattle and call in the late season?

“The only time you should call during the late season is when you’re trying to grunt a buck you see into shooting range.” —Tevis McCauley, Whitetail Heaven Outfitters

What about a decoy?

“Unless you’re with PETA, I’d advise against it.” —Tim Clark

“A head-up doe decoy will spook does, but a head-down doe decoy in a feeding position—in a corn- or bean­field, say—can help bring bucks out a little sooner.” —Peter Martin

Fill in the blank: Late-season deer drives are _____

“Your neighbors will love your deer drive. Why work on good deer management just to drive deer off so someone else can kill them?” —Keaton Kelso

“Go in super early with a climber and sit right in the bedding area.” —Anonymous

Besides the obvious stuff, list your most important late-season gear items. Top answers:

What is the best and warmest late-season garment? Top answers:

What is the best muzzleloader ­bullet? Top answers:

Really, what’s the farthest a hunter should shoot with a muzzleloader?

“If a guy tells me he can shoot 400 yards, he’ll have to prove it to me on the range first. Otherwise, we’ll get closer.” —Tim Clark

Does an Ozonics unit really fool the noses of wary late-season bucks?

“If it gives you a 1 percent ­advantage, I’ll take it.” —Keaton Kelso

“I use one. But I still hunt the wind.” —Joel Artis

“I don’t believe in these products enough to trust them. This time of year the wind is steady as a rule. Hunt it.” —Tim Clark

What is the craziest thing you’ve ever heard a client say about late-season buck behavior?

“Does it make a spark when you hit the deer?” —Keith Miller, Montana Whitetails

“I hope it warms up.” —Peter Martin, Buffalo County Bucks

“The farmers cutting corn will keep the deer out of the area for a few days.” —Derrick Robinson, Buck Country Outfitters

“It’s no wonder that we aren’t seeing any deer. Whitetails travel south for the winter.” —Mark Santos, Whitetail Heaven Outfitters

“Can I hunt the food plot in the morning?” —Bryan Dawes, Brushy Fork Outfitters

What is the biggest mistake late-season hunters make?

“Lack of scent control. A lot of hunters think that because they’re in a blind, they won’t alarm the deer with their scent. Try using that logic to fool 30 to 60 deer in a field when half of them are downwind.” —Tony Sehman

“Not resighting your bow or muzzleloader in cold conditions.” —Peter Martin

“Getting locked in on hunting one food source over and over and not scouting for new sign.” —Brian Phillips, Kentucky Whitetail Guide

“In an old abandoned car. Deer were feeding in a food plot. Putting up a pop-up blind would have been too noticeable, so we popped the door of an old Chevy and got both windows down. He was just bummed the heater didn’t still work.” —Tony Sehman

“In a stand on a ­telephone pole right next to an abandoned farmhouse.” —Anonymous

“In an abandoned combine sitting out in the middle of a cropfield.” —Eric Albus, Milk River Outfitters

“In a cemetery.” —Kevin Small

“In a silo.” —Brian Phillips

“Right next to a busy highway. He arrowed a 194-inch buck.” —Anonymous

“On an old bulldozer in a cornfield. There was freezing rain, and it had a roof on it. He got a nice buck from that dozer too.” —Anonymous

“On the last week of ­rifle season, a client got tired of waiting for this particular Booner buck, and so he asked to be moved. Wrong decision. We put another man in the same spot, and in the last 10 minutes of the season, that Booner walked right out into the middle of the cornfield. Boom! I’ll never forget the look on the face of the guy who wanted to be moved. He almost cried.” —Keaton Kelso

“I had a hunter who wanted to leave at noon on the last day. I talked him into staying, and he arrowed a 172-inch 8-point in the final minutes of the season.” —Anonymous

“Father and son ­doubled on the last day.” —Zach Jumps

“Last 15 minutes of the last day, a big buck walks across a food plot at 100 yards. Wham. On video.” —Peter Martin

“Last day, last hour, a client shoots a buck and misses. But then reloads and drops him.” —Mark Liebner

“With only one hour before his plane left, I took a client for one last Hail Mary hunt. He shot a 155-inch buck—with 15 minutes to spare.” —Eric Albus

“A man dying of cancer took two B&C bucks. He cried ­because it meant so much to him.” —Anonymous