How to Create the Perfect Late-Season Deer Stand

If you could whip up the ideal spot to tag a big winter buck, this would be it—including six key ingredients, from good grub to a great escape plan 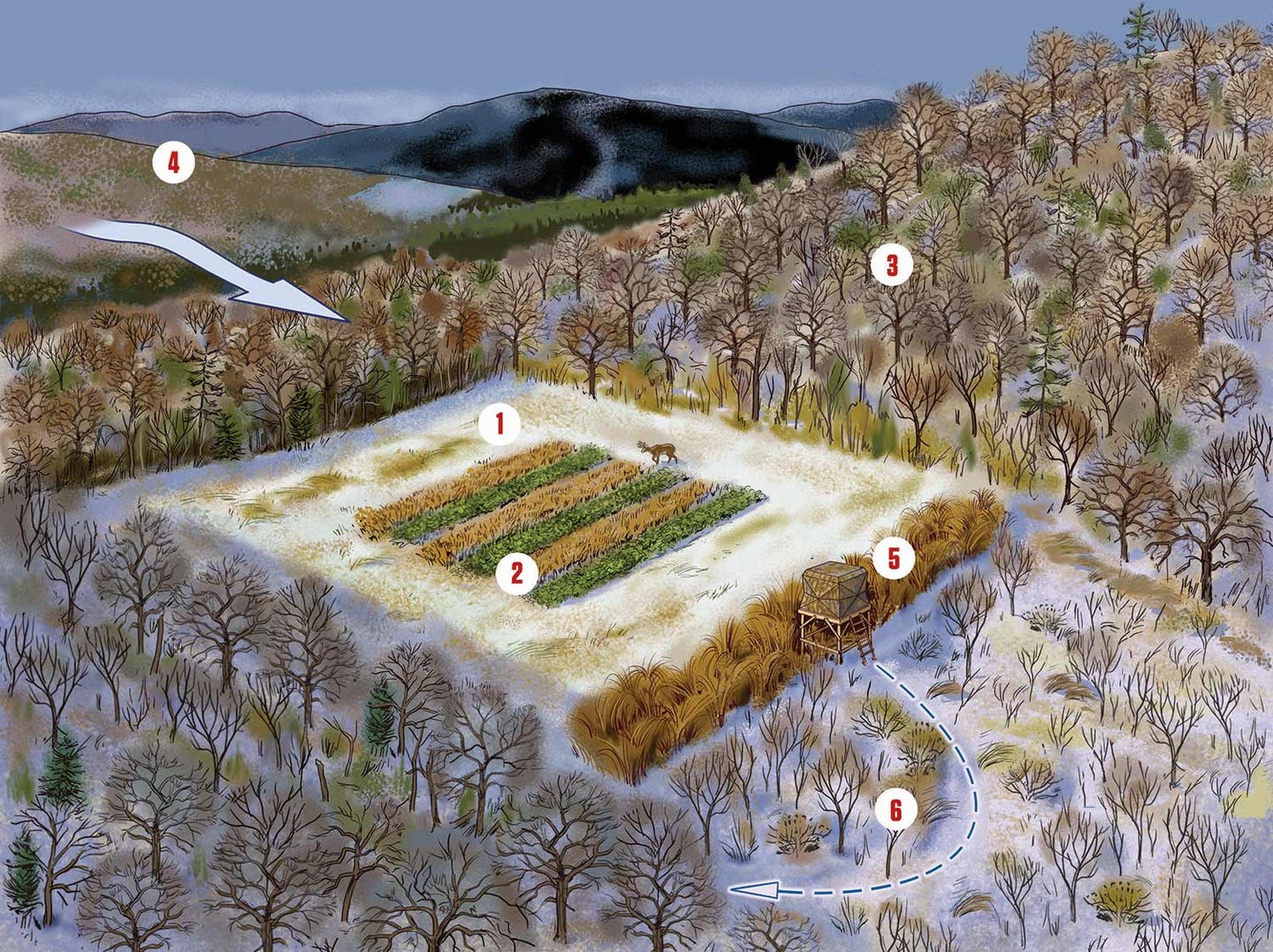 The ideal late-season deer setup has: (1) prime food, like the food plot shown; (2) a mix of grains and greens in the plot, (3) good bedding cover nearby, such as a south-facing slope; (4) a steady, advantageous wind; (5) an elevated blind or stand with good cover; and (6) a safe escape route. Steve Sanford
SHARE

Maybe you’re lucky and already have the perfect late-season deer stand. Or maybe you’ve got the perfect stand location, with a great late-season food source near good bedding cover and all you have to do is make a few tweaks to create an ideal winter whitetail setup. But even if you don’t, keep reading. This isn’t a pie-in-the-sky scenario. You don’t have to have every ingredient below, in just the right amounts, to whip up a killer late-season hunt. This hypothetical setup of the absolute best late-season deer stand is just something to shoot for; the more elements you can put together, the better.

Besides, it’s not too early to start thinking about next winter, and the winter after. The best late-season deer stands are typically planned and prepared many months in advance. My buddies and I have been tweaking our late-season setups for years, and while actual perfection may still be elusive, as our spots get increasingly dialed in, more and more deer are showing up to our winter honey holes every season. If you could put everything you need for the best late-season deer stand possible all in one spot, it would look something like the illustration above, and it would have these six key ingredients.

This first ingredient is the most important. Once the rut winds down and cold weather kicks in, it’s all about food, and if your neighbor’s ground has better food than yours, then his wall is going to have better late-season bucks on it too.

The best winter food sources are grains and greens that are easy for deer to access even if there’s snow. Some prime examples include standing beans, standing corn, brassicas, and recently seeded alfalfa that’s tall enough to poke up above a blanket of white. If you have any of these on your ground, that’s where you want to start.

If you don’t, wait a couple days after a snowfall and speed scout for tracks showing concentrated feeding activity. Post-rut deer might be devouring the last fruits in a grove of apple trees, or plucking green leaves from a honeysuckle thicket, or digging for acorns. Meanwhile, start planning your perfect winter food plot for next year. I know one hardcore deer hunter in Kansas who not only plants food plots specifically for the late-season, but fences them off until the post-rut to make sure he has the best late-season food plots around.

Related: Try This Expert Tactic to Tag a Late-Season Monster

Speaking of the best late-season food plots, ideally these should provide variety. Winter deer seem to prefer grains when it’s very cold and greens when it’s on the warmer side. Why not have a plot that attracts bucks no matter what the temperature? A plot of standing corn or beans, intersected by strips of tall brassicas is a perfect example.

If you have the best late-season food plot around, winter deer will walk a considerable distance to get to it if they need to. But they’d rather not need to. As a rule, late-season deer bed close to their primary food source, and the closer they bed, the more likely they are to reach the feeding area while there is still daylight. If you have several good food sources on your ground, give preference to the one located closest to prime late-season bedding cover, such as a wooded south-facing slope or thick cover that gets some sun during the day. If you are planning a late-season plot for next year, be sure to take the surrounding bedding cover into consideration.

Late-season deer are ultra-wary. You can’t risk your killer spot on a fickle wind. You want to be able to come back repeatedly, and that means you need a steady wind that blows in a direction from which deer are unlikely to approach. And you don’t want the wind blowing out into the feeding area, either, where deer will get you once they reach the grub. So, set up with the breeze that runs perpendicular to the deer’s line of travel. In a perfect world, you’d also have a downhill slope behind you, so that your scent passes harmlessly above any deer that do get downwind. And don’t even think about hunting this spot when the wind is wrong.

Only hang a stand if you have a tree with good cover, which can be hard to come by now. That likely means some sort of conifer or an oak (possibly a beech) that’s still holding plenty of leaves. The last thing you need is a nanny doe picking you out of your tree and then stomping and head-bobbing all night long, putting all the other deer on edge. Your best bet is probably a ground blind, but you’ll need to brush it in well and let the deer get used to it. A ground blind has several advantages now; it hides any fidgeting from the cold, helps contain your scent, and allows you to run a small portable heater if needed.

A setup that a lot of hardcore hunters are going to these days for late-season deer is an elevated platform with a hub-style blind or a box blind on top. This gets you above the deer’s line of sight, which helps keep them from spotting any movement inside the blind. That said, it’s something you need to put up well in advance, so if need be, save it for that late-season plot your planning for next year.

This is so important. If the buck you’re after doesn’t show or doesn’t give you a shot, there’s an excellent chance that when it comes time to leave, you’re going to have a field or plot full of deer to contend with. It’s easy to say that you should just have someone pick you up in a truck, which will typically bump the deer off the field but won’t prevent them from coming back the next day. But that’s not always possible. Better to configure the stand or blind so that getting out unseen is easy. Pick a tree that’s a little off the edge of the woods, where you can shoot into the plot but you also have cover when you get down. Put your sticks or steps on the back side of the tree, so you can use the trunk as cover as you descend. I’ve snuck out this way after full dark many times without getting caught. Just keep your movements slow. A downhill slope on the back side of your stand or blind doesn’t just help with your scent; it also lets you instantly disappear to the deer by simply ducking down the hill to exit. For next year, plan on creating some screening cover, such as switchgrass or a few rows of standing corn, in front of your stand or blind that will help you escape unnoticed. That way, when that shooter buck doesn’t show or give you a shot, you can come back the next evening, and the evening after…until you put a tag on him.

Read Next: Aggressive Tactics for a Late-Season Deer