10 of the Biggest Whitetail Shed Antlers Ever Found, Including Three World Record-Size Deer

We know these monster bucks only from the antlers they left behind. At least one would have smashed Milo Hansen’s world-record typical whitetail and another would likely have inched out the current non-typical No. 1 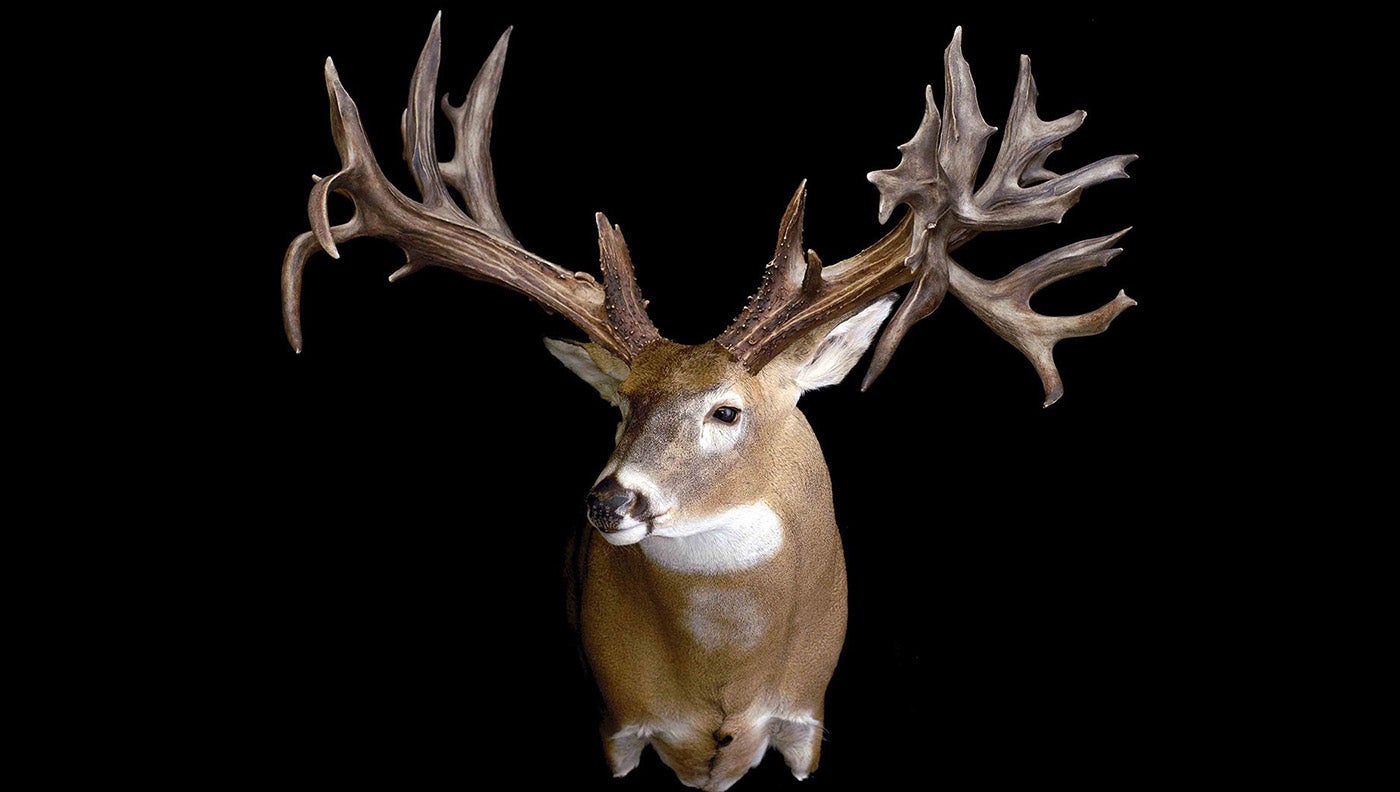 These antlers are known as the Holy Moses Sheds, and it's not hard to see why. Antlers By Klaus
SHARE

Some of the biggest whitetail bucks ever to walk this earth were never fooled by a hunter, nor found dead by anyone. More than one had the headgear to become B&C and P&Y world records, but none is listed in either book—because, in most cases, no one ever put a hand on them, let alone a tag. These world-class bucks just disappeared, their demise as mysterious as their spread measurements.

The 10 huge whitetails listed here did leave something behind, however: some of the biggest shed antlers ever found. The record book where you’ll find these trophies is kept by the North American Shed Hunters Club, who helped us verify the standing of the massive sheds below (if known). The actual antlers themselves, in most cases, are in the hands of private collectors, so we turned to Klaus Lebrecht and his wife Nola of Antlers by Klaus for photos of their incredible replica antlers and mounts—each a glimpse at what these behemoth bucks looked like before they vanished.

These incredible sheds were picked up in Nebraska in 1959. Had the deer been killed (or found dead) by a hunter, Milo Hansen’s giant would be the No. 2 B&C typical whitetail, and The General would still hold the world record—by a long shot. As it is, the buck’s sheds hold the NASHC’s world-record for a typical matched set. With a 104-3/8-inch right side and 103-2/8-inch left, the Cornhusker giant scores over 207 inches, putting it well into world-class territory without a width measurement. Give The General its estimated 22-inch inside spread, and the buck goes into the high 220s, net—enough to shatter Hansen’s 213-⅝ all-time typical mark.

A Kansas rancher found this buck’s matched set not once but twice. He found the first set while checking a stock tank, and believe it or not, he left them there. But his son returned a month later to retrieve them. The right antler from this set scores 98-4/8, and is currently the NASHC’s number 13 for a single typical. The left antler had the brow tine and G2 broken off, which were later repaired.

The second set of sheds, found the following year, were not broken. But the left G2 was much shorter. Some reproductions of the rack take the best of both sets and project the buck as a potential 212 to 217-inch net typical, but that “Kansas King” probably never existed. Still, he was a tall and amazing typical that likely would have netted between 200 and 204.

The famous Knife Handle Buck is the NASHC’s world-record single typical-whitetail shed antler, scoring 106 even, all by itself. The reason it’s not near the top of the matched-set listings is the same reason for its nickname—because one beam of the original set was cut to make a knife handle. The complete side was found in Iowa in 1969. Some 40 years later, Klaus Lebrecht tracked down the other side (which was indeed cut from the base to the G2) and created the mount shown. With a would-be estimated gross score into the 230s, the Knife Handle Buck, too, would likely have threatened the B&C top typical.

Very few 5X5 typical bucks have a shot at breaking the 200-inch B&C mark, but this whopper Canadian buck seems to have had the right stuff. Found in the Pipestone River valley in Saskatchewan in 1983, the Flemming Sheds are the NASHC’s top-scoring matched set from a typical 5X5. With incredible G2s, measuring 17-2/8 and 15-6/8 inches, the rack has an estimated net B&C score of 207, including a spread credit.

Also known to locals as “The Walmart Buck” for its habit of hanging out near the superstore’s parking lot in Wausau, Wisconsin, this huge suburban buck routinely crossed a busy road en route to its sanctuary in a popular state park/ski area. The buck made the highway crossing once too often and was hit by a vehicle in 2013. But not before devoted shed hunter Jason Nieuwenhuis had found the buck’s matched sheds. With 19 scorable points, the rack is thought to gross in the 230s, with estimated spread measurement.

Another well-known suburban buck, this picket-fence 6X6 typical was seen and photographed several times around Excelsior Minnesota in the fall of 2010. The buck’s matched set was found in February of 2011 and scores 175 even, without a spread credit. It now stands as the NASHC’s No. 7 typical matched set. The buck was never seen the following year, and no verifiable evidence of its demise was ever found.

This colossal jumble of antlers is the NASHC’s world-record non-typical matched set. Another buck with a long history, the Minnesota Monarch was fed and photographed by a northern Minnesota resident for several winters. That anonymous individual also had another set of sheds from the buck, which he found the year before he picked up this record-setting pair. The right side scores 180 even and the left 139-4/8. If you add a spread credit, the buck’s net non-typical score is estimated at 334 B&C. That’s ⅛ of an inch bigger than the current B&C non-typical world-record, the similarly named Missouri Monarch. While accounts vary, several experts believe that this buck was killed by a hunter the year after it dropped these sheds, and that the rack had gone significantly downhill.

Kansan Jim Bath’s name is attached to this amazing set of antlers, but his dog actually deserves the credit. Bath’s pooch returned home one day in 1989, chewing on a massive shed. Bath conducted an organized search for the buck’s other side, only to learn that a neighbor boy had already found it. Bath purchased the antler to complete the set, which now ranks second all-time in the NASHC books for a non-typical matched set. The right side scores 141-⅛ and the left 150-2/8. With an estimated spread credit, the set nets 305 inches. Sometimes referred to as “the original Kansas King,” this buck too was never seen by a hunter.

Found in Montana in the 1950s, this matched non-typical set sports incredible mass, with six circumference measurements over 6 inches and one over 7 inches. The score of this incredible whitetail, with an estimated spread measurement, is 265-4/8 B&C. At the time it was found, it would have outscored the then B&C world record non-typical.

This shed, found in 1951, was scored at 148 even and was the top non-typical single side for many years. Amazingly, it was found by a man who, riding a train in Itasca County, Minnesota, spotted a running deer that had just dropped the antler. Even from a distance, the man could tell it was a huge shed. He jumped off the train and ran to pick it up, knowing he would have to walk the mile back to the station.

The biggest matched-set whitetail sheds get the most attention, and maybe deservedly so, but if you focus only on the bucks above, you’ll miss a lot of other cool stuff the North American Shed Hunters Club keeps track of. The organization keeps records of the best sheds for all North American antlered animals, so if you’re looking for the best mule deer, elk, moose, or caribou sheds, their record book has those too.

But I’ll admit it, I’m a whitetail nut, so I got a little giddy when I found a NASHC download that features the best sheds in a bevy of whitetail subcategories. If you’re an antler nerd, you can waste some serious time here, and to help lure you in, here are a few teasers that caught my eye.

The top spot in the G1 category is held by a 2018 Iowa buck that grew a 19-2/8-inch eye guard (as a reference, the distance between my elbow and the tip of my middle finger is about 18 inches so…yeah, a super long tine). Maybe most shocking is that this category actually tops the next one.

The longest G2 recorded by the NASHC was grown by a Missouri buck, whose shed was found in 2003 and measures half
a yard exactly, or 18 inches—or an 1-2/8 less than the longest brown tine above.

People go nuts for drop tines, and this one is crazy-long at 17⅜ inches from an Ohio shed found in 2010.

OK, for anyone who yearns to see their name in a record book, there is exactly one shed entered for the longest-G8 category, and it’s just 3-2/8 inches, from a Saskatchewan antler. In other words, all you have to do is find a 9-point side with a G8 that’s 3-3/8 or longer, and you could be a world-record holder! —S.B.

How Much Are Shed Antlers Worth?

Big whitetail shed antlers are hugely valuable: They tell you a given buck has survived; they tip you off to buck core areas; and they could pay for your next treestand, deer rifle, or even ATV.

That’s right. Antler brokers paying out big for buck bone—some truly heady amounts in some cases. How much? Below are some conservative values I got a few years ago from Pennsylvania antler broker Gary Knepp.