36 Deer Foods Every Hunter Should Know

From the obvious, like acorns and corn, to the overlooked, like white cedar and sumac, these favorite deer foods and your knowledge of them can help you fill a tag this fall 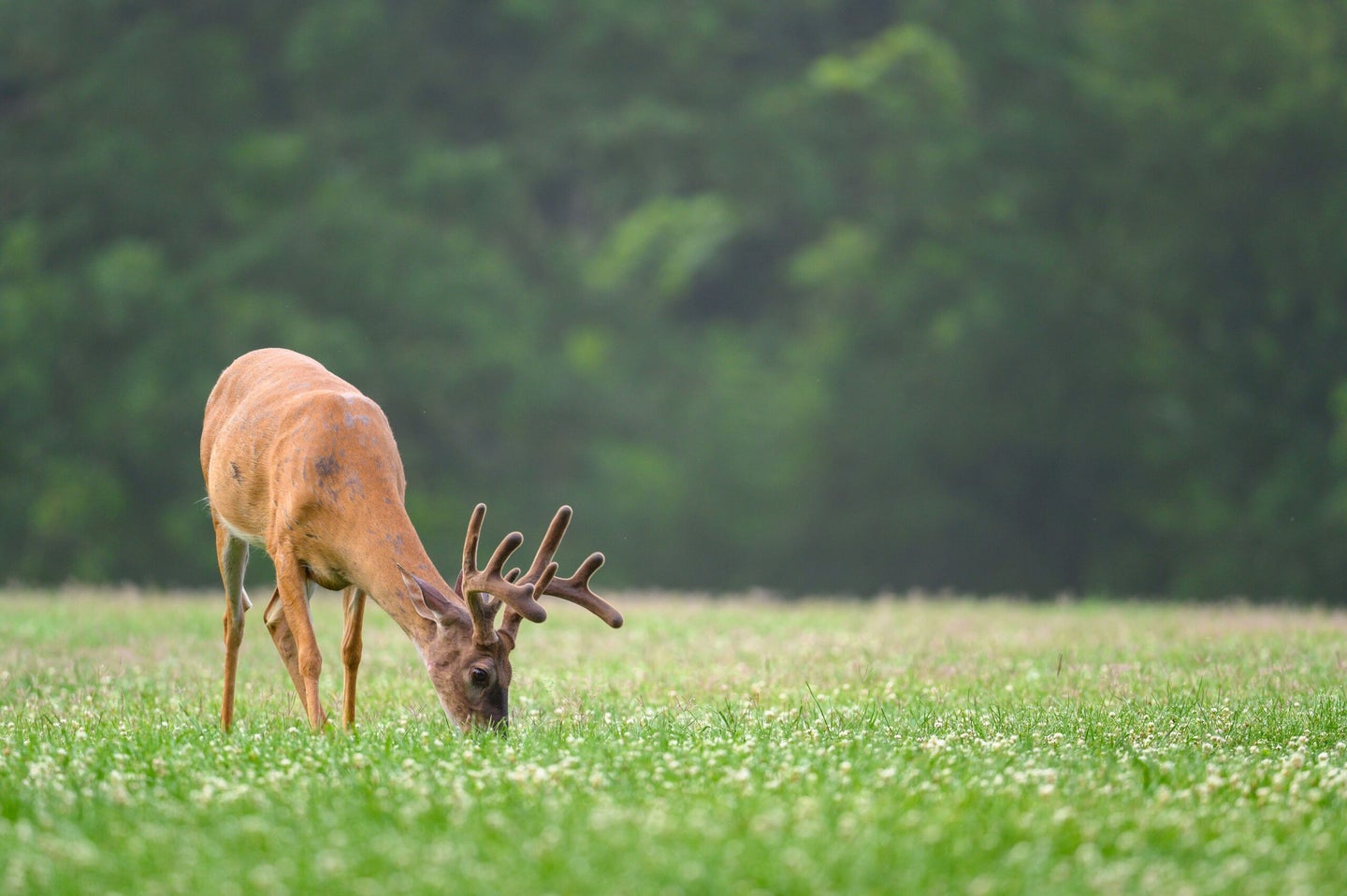 A large buck in full velvet in a food plot. Tony Campbell/Alamy
SHARE

On a summertime woods walk the other day, I saw that the boughs of the wild apple trees are sagging with green fruit this year. It made me think that a certain deer trail I know of is going to be on fire come fall, and that I’d better get a stand hung. It also reminded me that it’s not too early to start thinking about deer foods in general. Knowing the key forage species, and how the animals use them through the season, should play a huge role in your hunting plans for 2020. So, now is a good time to brush up.

Here are 36 deer foods every hunter should know about, all couched in advice and tips about how to use your knowledge of key forage species to help you put a nice buck on the wall.

Just about every hunter knows that deer devoir acorns, alfalfa, apples, corn, and soybeans. But to stay a step ahead, you should also know the following about these five favorites.

[1] Acorns: Deer prefer acorns that fall without their caps, as these nuts tend to have fine, firm flesh. Those still sporting caps often have flesh that is punky or rotten. Keep an eye out for this when you’re scouting.

[2] Alfalfa: Deer love this perennial legume, but never more so than when it is newly seeded. They’ll hammer a spring-planted field all fall and dig through deep snow to get to it in winter. If there’s a new alfalfa field on your farm or lease, you can plan on it being the hottest spot you’ve got this season.

[3] Apples: Sure deer love the sugary fruit. But remember that they’ll keep hitting orchards to browse on the buds and twigs of these and other soft-mast trees long after the sweets are gone.

[4] Corn: It’s a game-changer. When a farmer fires up a combine, it’s suddenly a race between deer and a host of other critters to clean up the waste grain. That’s why deer will temporarily abandon other foods to follow the combine. You should too.

[5] Soybeans: In early fall, deer crave the plant’s green leaves, but once the foliage turns yellow, the animals move on. They’ll be back in winter to eat the pods and beans.

Before the moldboard plow made a giant salad bar out of much of the country, deer did just fine, thanks in large part to naturally growing hard and soft mast. You know about apples and the acorns from white and red oaks. But here are six other favorite fruits and nuts to scout for:

[6] Beechnuts: These are a staple where oak trees are absent or few, or when the acorn crop fails, especially in the Northeast.

[7] Berries: Deer actually prefer the leaves, branches, and stems of raspberry and blackberry bushes to the fruit, which is usually gone by hunting season.

[9] Other Acorns: White and red oaks get all the ink, but deer readily devour nuts from more than a dozen other oak trees and shrubs. All told, acorns can comprise more than 60 percent of the fall diet for whitetails and more than 50 percent for blacktails. Muleys love them, too. Basically, if it’s acorn, it’s deer food.

[10] Persimmons: These juicy orange fruits ripen in early fall and drop gradually during wind storms through the late season.

[12] Wild Grape: The fruits are often available through fall and winter. Deer also eat leaves on vines clinging to trees and shrubs above the snow.

Find the Browse that Bucks Can’t Live Without

Unlike agricultural crops and mast, the leaves, twigs, and buds of small woody plants, called browse, stimulate the microbes in a deer rumen, which is critical to digestion. Deer cannot live without it.

A whitetail needs to consume 7 to 10 pounds of browse every day, which means good deer habitat needs to include plenty of brush, shrubs, saplings, and vines growing low enough for them to reach. If a potential hunting area has little browse, it will have few deer, even if there are abundant croplands and hardwoods that drop truckloads of nuts. On the other hand, wherever you find plenty of low brush and saplings in otherwise good habitat, you should be in for steady action.

[17] Dogwood: Gray dogwood is an important browse species in the eastern half of the country; red osier is key east and west.

[18] Greenbrier: The blue berries of this widespread thorny evergreen vine can last well into November, and the leaves are a favorite all winter long.

[19] Honeysuckle: Another favorite vine, particularly in the southern and mid-Atlantic states where its leaves remain attached through winter.

[20] Maple: High residual sugars give red leaves a special appeal. The twigs and buds of red, sugar, and striped maples are also favorites.

[21] Mountain Laurel: Without the high-protein leaves of this plant, winter deer would starve in some areas.

[22] Poplar: Muleys relish the yellow leaves and the buds of low or fallen branches.

[23] Sagebrush: Not favored, but an important winter species for mule deer because of its availability.

[24] Various Treetops: Wind-fallen or cut by loggers, they put mast, leaves, buds, and twigs suddenly at a deer’s feeding level.

[25] Willow: Widespread in western riparian habitats and a key browse species for whitetails, muleys, and blacktails.

You know, you don’t have to plant greenery from a seed bag marked “Monster Bucks” for it to attract monster bucks. You don’t have to plant it at all. Turns out, the forbs, sedges, and herbs that grow naturally in fallow fields, pastures, burns, prairies, alpine meadows, wetlands, and natural clearings are powerful deer attractants when green and tender as well as when frosts make certain species less toxic and tastier. Up to 70 percent of a whitetail’s summer diet consists of forbs. Here are just a few favorites:

In fall, mule deer quickly devour a long list of herbaceous plants, including:

During autumn’s excess, when deer delectables fall from the trees and pop up underfoot (mushrooms are a prime, overlooked food in early fall), most evergreen foliage holds marginal appeal. But when winter hits, these conifers become crucial for food and thermal cover.

[34] Northern White Cedar: The waxy, high-energy leaves and buds are a favorite winter treat for whitetails across the North; the recent whitetail boom has in fact significantly diminished the species.

[35] Hemlock: A staple for winter deer in the North, hemlock is one of the few eastern conifers of significant nutritional value.

Given the choice between an acorn, an apple, and a red maple leaf, a deer will eat all three. You can try to explain to him that he has to choose one. But he won’t listen and it’s not in his nature anyway.

Deer are nibblers. Walking to and from primary feeding areas, they nibble on a raspberry stem here, pluck an aspen leaf there, and maybe linger a while under a crabapple tree. Savvy hunters know this and keep track of these secondary food sources because their availability can dictate what path a deer chooses for its daily travels. Plus, when the savviest buck on your ground doesn’t show in the crop field or food plot before dark, guess where his: calmly mowing some secondary food source in the woods, waiting for dark before exposing himself. You might want to meet him there.

Bonus Tip: How to Scout for Acorns

Deer prefer white oak acorns to red. Whites drop earlier. Nuttalls and pin oaks drop even before whites. Reds are most reliably from year to year. Trees with the widest crowns and on south slopes produce the biggest crops. Blue, scrub, and live oak acorns are tops with western deer.

And all of that is perfectly good to know—as long as the deer and the trees play by the rules, which sometimes they don’t. Outside the pages of magazines and manuals, deer tend to zero in on the acorns of specific trees in a way that is either somewhat or totally unpredictable. And so, as a practical matter, the best way to tell which nuts they’re after is to go look.

Walk amid the oaks—be they white, red, or other–and look for freshly fallen nuts without caps (see above), partially chewed acorns, pawed leaves, hoof prints, and fresh droppings that are often pasty and green-hued. Keep an eye out for fresh rubs and scrapes nearby. And remember that the hot tree or trees can change at any time, so keep close tabs.