Do Bait Bans Really Help in the Fight Against CWD?

Michigan may soon overturn its deer-baiting ban due to hunter backlash. But should the prohibition have been passed in the first place? 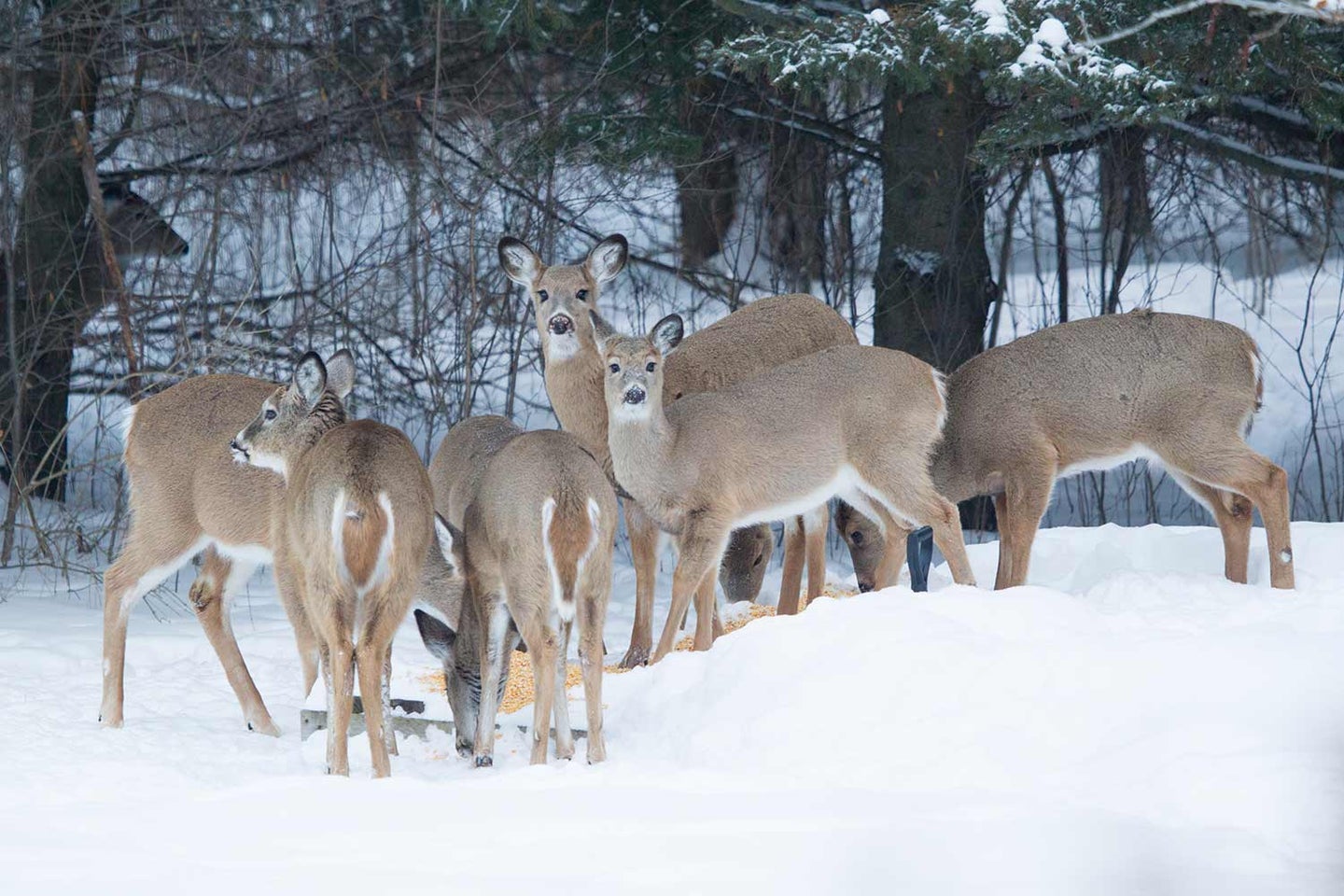 Winter does congregate around a pile of corn. Deposit Photos
SHARE

There’s been a battle brewing all year over deer bait up in Michigan, where the DNR banned feeding deer in all of the Lower Peninsula and parts of the U.P. for the 2019 season. The new restriction was so contentious among hunters that earlier this month, the state senate advanced a bill that would overturn the ban for next year. Governor Gretchen Whitmer has said she will veto it.

A number of hunters testified in favor of the senate bill, including Ted Nugent, who said that he talks to sportsmen every season who are giving up hunting due to ever-tightening regulations.

The subject of baiting and CWD has been on my mind a lot lately because I live in Kentucky, where baiting is both legal and extremely popular. I’d guess that 80 percent or more of those early-season, full-velvet Kentucky bucks you read about every September are killed while the deer had its head in a corn pile—or was at least walking to or from one.

Kentucky is currently CWD free, but we share borders with five states—Missouri, Illinois, Tennessee, Virginia, and West Virginia—that are not. It doesn’t take a crystal ball to see that one day we’ll probably be having a CWD-and-baiting debate of our own here.

Hunter perspectives on baiting can be dramatically different, depending on where you live. If you’re in a state where it’s illegal, baiting is poaching, no different than spotlighting. If you live in a place like Kentucky or Michigan, where hardware stores sell shelled corn by the pallet every fall, it’s just part of the culture.

My personal situation is unique in that I use bait, but I’ve also traveled to hunt in many places where baiting isn’t allowed. It can sure help fill a tag, but life goes on without corn piles. I’ve done a lot of reporting and research on CWD, and I spend a good bit of time talking with fish and wildlife staff, too. I have watched as some states, like Wisconsin, devolve into near anarchy over CWD management, while others, like Tennessee, have implemented plans that are at once aggressive, but also supported by the state’s hunters. (To be fair, Wisconsin was one of the first whitetail strongholds where CWD was discovered, while Tennessee is among the most recent. Volunteer State managers had a lot of time to look at what not to do.)

So, what do I think about a baiting ban as one of the standard responses to CWD detection? I’ll tell you in a minute. Before I do, I want to pose two questions, one to state agencies and another to hunters.

To the State Agencies

Hunters are disappearing faster than we can replace them, despite our best efforts. Hunters manage the deer herd and pay your salaries. Today’s hunters are also better informed than ever before.

The Association of Fish and Wildlife Agencies has a list of best practices to implement when CWD is discovered, and most states use that when modeling their response plans. Limiting the movements of captive cervids is the most important recommendation. Few hunters have a problem with cracking down on deer farming.

Limiting the movements of hunter-harvested animals is next in line. It’s an inconvenience to process a deer in the field, but with education, most hunters can learn to live with it.

Banning deer urine is next. Whether bottled deer urine is a vector for passing along prions is up for debate, but either way, it’s doubtful that leaving it at home will be a deal-breaker for many hunters.

Then, there’s banning the transfer of cervid reproductive materials. Again, nothing for the hunter who doesn’t own a deer farm to worry about.

Finally, we get to baiting—a practice that directly affects the success rate of Average Joe Deer Hunter. Sure, it’s easy to say, “Quit being lazy! Get out there and scout and find sign and hunt deer the real way!” But access has become so difficult to attain that wandering around the farm looking for sign is an impossibility for many of today’s hunters. The 5 acres behind the house are all they have, unless they hunt the crowded state forest, land of mature timber and few deer.

It’s tough for hunters who’ve never used bait—or who have a 100 acres of prime farm country—to understand. I know the AFWA cites a 2003 report that says, “the effect of baiting for harvest is insignificant.” But not to the individual hunter. Anyone who says that a corn pile in front of a ladder stand on that 5 acres makes no difference hasn’t spent much time watching a corn pile. Reality is, for the casual sportsman with one weekend to hunt, that corn pile can be the difference in putting a deer in the freezer or not—particularly if it’s the way that hunter has been doing things for 15 years.

The AFWA report cautions against bait, mineral licks, and other things that unnaturally congregate deer. But, as Nugent pointed out at the Michigan senate hearing, deer swap spit all the time. You can’t regulate licking branches or fruit orchards or, for that matter, piles of corn spilled on a field edge during harvest time. Are you really making a difference in a free-ranging deer herd by banning bait? Or are you checking things off on the “We gotta do something” checklist?

To the Hunting Public

Let’s just imagine for a minute that CWD isn’t some hoax cooked up by the DNR to get extra money and that it could end deer hunting as we know it. That is, after all, what the top minds in whitetail science are warning us about. If you are not willing to give up baiting, what are you willing to do?

When new hunting regulations come out—particularly bans on anything—emotions run high. It’s easier to demonize wildlife biologists as bookworms, meddling with your hunting with the stroke of a pen, than it is to make an adjustment that might make your hunting more difficult, expensive, or inconvenient.

But look at Wisconsin, arguably the hotbed of CWD in the United States. The disease was discovered there in 2002. The usual procedures, including baiting bans, were implemented—plus more severe measures, like state-sanctioned sharpshooting. The situation became so contentious that many of those regulations were relaxed. Currently, baiting is allowed in some Wisconsin counties, but not others. And in areas of southern Wisconsin, the CWD prevalence rate in adult bucks is upwards of 50 percent, and the deer that are affected are dying at twice to three times the rate of unaffected deer.

Let that sink in.

Now, if you want keep your corn pile, isn’t it worth having to learn to process your own deer in the field so that you’re not transporting spinal columns all across the state? Is it worth waiting in line at a mandatory check-and-test station? Is it worth shooting extra young bucks on the farm you’ve been managing for 10 years? What about paying a $10 upcharge when you buy your hunting license, to fund CWD testing and research? (Testing dead deer at $20-plus a pop for CWD is about enough to make a state DNR go broke.)

Whether CWD has yet to be discovered in your woods, or you’re arguing over these very things right now, you might consider your answers carefully. Rest assured, your agency isn’t going to ignore a CWD detection.

How to Agree on CWD

Personally, I don’t think a bunch of bait piles scattered across the landscape is really a good thing for the deer herd. Bait congregates deer, particularly in the late summer and again in the late winter, and that makes it easier for them to swap spit, which could mean swapping infectious prions. For me, a baiting ban wouldn’t mean too much—a tougher early season, maybe, but not much difference over the long haul.

But my hunting situation is different than most. I have plenty of very good places to go and plenty of time to hunt. I don’t think a baiting ban is enough of a silver bullet in the CWD fight to tell weekend hunters they should stop doing it. It will absolutely affect their success rate. Can they learn to hunt without it? Sure. But that’s not the point. The idea is to not give them another reason to quit.

There are aspects of the CWD fight that are more important and easier for hunters and state agencies to come together on. We need to focus on those first. We need to find ways to fund more testing, make it easier for hunters to get their deer tested, and spread the word about how important it is to not transport brain and spinal tissue around. Teach people to quarter their deer in the field, if that’s what it takes. And above all, crack down on the high-fence operations.

It’s a tightrope. And every step counts.