Ever want to know what it takes to wrangle oversized invasive pythons? We sit down with one of the pros to find out 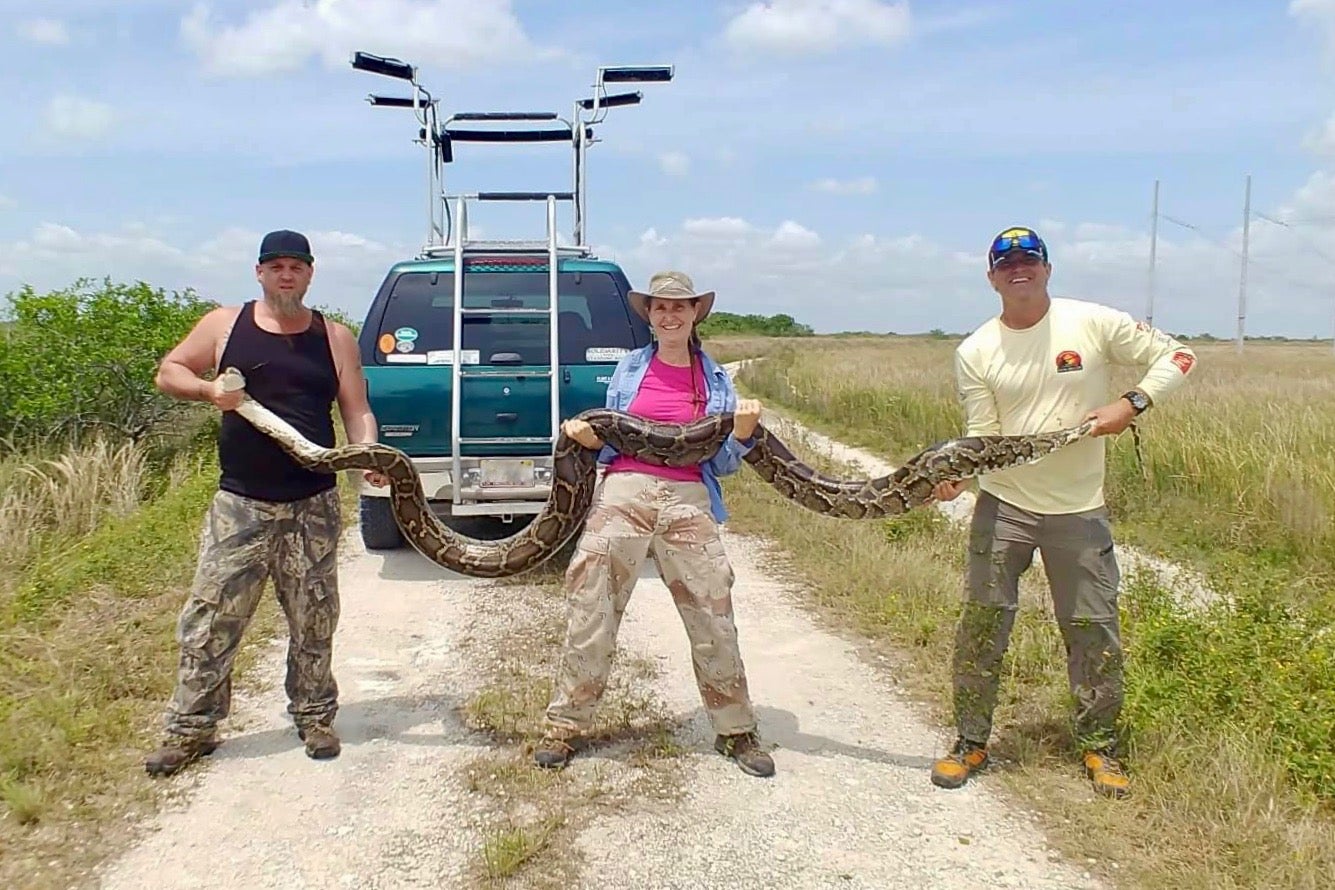 Donna Kalil still remembers when the South Florida city of Aventura was a place filled with actual adventure. She grew up hunting small game there in the 70s and kept a pet snake underneath her cowboy hat as a teen. In the ensuing decades, those wild lands were paved over to build America’s third-largest shopping mall and a bevy of cookie-cutter subdivisions. Kalil also became a more tamed version of herself, going from wild child to PTA president with a real estate license.

But Kalil’s reptile-wrangling side was reactivated in 2005, when she first read reports of a new apex predator invading the Everglades—Burmese pythons. Desperately wanting to help, she took to the swamp and stuffed a four-footer into a pillowcase. One decade and two python-catching competitions later, the region’s water management district hired Kalil to help eliminate the animals in a more official capacity. She became one of the original 25 people employed as part of the so-called Python Elimination Program, which pays minimum wage and is exactly what it sounds like.

That program now employs dozens of enthusiasts, environmentalists, and eccentrics with nicknames like Wildman. But Kalil remains one of the toughest and most prolific members of this tribe, having just caught, euthanized, and logged her 480th monster snake. And despite a few close calls, she shows no sign of slowing down. Field & Stream caught up with Kalil just as she was headed out in search of her next score.

Q: The state offers python hunting classes now, which wasn’t the case when you got involved. How did you come up with your method for tracking and killing snakes?

A: As soon as you have them by the head, then the fight begins. If you catch it too far above the head, it’s gonna slip out of your hands and possibly get away. It’s difficult to do, but if you grab it by the tail, you’ll run a risk of it overpowering you. I’ve caught snakes up to 13 feet long on my own, but anything over 10 feet can overpower you, especially if they musk you. And you don’t want to lose hold of them once you get that close.

Q: What does it mean when a snake musks you?

A: Musk is basically a mix of poop and pee and other foul ingredients that snakes use as a defense when threatened. They excrete whatever they have in their bowels in hopes to make the experience of catching them so foul that you leave them alone. It also acts as a slippery agent to make them harder to grasp, and on a few occasions, I’ve seen them actually flinging it at me before I even touched them. They aim for your eyes because if they get it in your eyes you won’t be able to see, or if it gets in your mouth you will most definitely want to get it out of your mouth before you try to get any closer.

Q: How common is it to get musked doing what you do?

A: I’ve been musked by several snakes—from 15-foot pythons to 8-inch ringneck snakes. They all have a distinct smell. The ringnecks and water snakes in my opinion are the most foul, pungent, and strong of them. Pythons musk at different times of the year, and both sexes have different smells. I’m no scientist, but I assume this has something to do with their breeding cycles. I imagine when and what they had for their last meal has a lot to do with the smell of their musk as well.

Q: What do you do once you manage to get a hold of them?

A: You grab them first, get them under control, and then you euthanize them. A lot of guys like to grab them by the tail and swing them around and do a little python dance. But to me, that’s not professional. I wanna go for the head every single time. The only way to kill them is to kill their brain, and it’s a very small brain. Generally I use a .22 hollow-point bullet.

There are some people who carry machetes and cut their heads off, but when you cut off a snake’s head, it’s still conscious for about an hour. So if you do that, you’re supposed to pith them, too, which means take a knife and stab the brain. The other way to put them down if they’re 10 feet or less is to put a hammer on the head and hit it with another hammer. That immediately kills them but takes some skill to do.

Read Next: Hunting Iguanas in the Puerto Rican Jungle

Q: This sounds quite physical, even if you’re using a gun. Do you work with a partner?

A: The one thing you don’t want to do is have a python wrap around you—and that’s whether you’re a little person or a big person. I got into trouble with a seven-and-a-half footer. I was being careless and figured I knew what I was doing. Which I did. But I allowed it to get around my neck, because I was on the phone. I had to have a friend pull it off of me. I didn’t want to let go of the head, because I didn’t want to get bitten in the face.

I’m not as strong as the other guys out there, so I have to rely on skill. You don’t really need that much strength, though, to keep things under control. But I can’t lift a 100-pound snake on my own, so it’s always better to have a partner. When they get bigger than 15 feet—they aren’t snakes anymore, they’re monsters.

A: I go out every day for 8 hours, 10 hours, 14 hours. You want to be out there first thing in the morning, and if the weather is conducive, you want to stay out a few hours after dark. I want to go until I catch something, and if I don’t, then I gotta get out there the next day. Sometimes I’ll go two or almost three weeks without catching a snake, so if I do catch something, I don’t want to go home, because there might be another one out there. I do know my limits and try and be in bed by 3:00 a.m., but I am definitely addicted to it.

Q: What do you do with the snakes once you kill them?

A: I get a few together, do length measurements, and sex them. I skin them out. I like to have them frozen before I peel them, because that way I don’t have to worry about parasites. I grew up killing my own food—I mainly spearfished, hunted small game, and caught lobsters. I never really had to kill any animals without the thought of eating them. So I’ve started to experiment with cooking the pythons.

Q: Were you able to find any recipes or tips online, or did you pioneer this?

A: I looked but I didn’t find anything. People eat rattlesnake all the time, but the issue with python meat is that it’s a little bit tougher because it’s a constrictor. Frying it will make it like shoe leather. I pressure cook it for 10 or 15 minutes, and then I can put it in any recipe that calls for chicken or pork—any fine white meat. It’s pretty damn bland, so I’ll add onions and garlic, or apple juice to make it a bit sweet. But what kind of flavor does a chicken breast have?

Read Next: The Biggest Snakes in the World

Q: The Florida Fish and Wildlife Conservation Commission is working with the state’s health department right now to determine whether pythons are safe to eat. Are they?

A: There’s a possibility for high mercury content, which is why I’ve started testing the pythons. I don’t eat anything bigger than seven-and-a-half feet. When I cut the smaller ones, I look at their gall bladders to see if they look healthy. My daughter got me a kit online to test for mercury. It comes with a Q-tip that you rub on the meat. If it turns orange or yellow, then it’s not safe. I eat them sparingly in stew, or I make jerky. I actually just made Christmas cookies out of python eggs. That kind of thing. I think of it as a similar risk to eating fish. If I eat python one week, I just won’t eat tuna.

Q: Obviously your goal and the goal of the program you’re a part of is to get rid of all the pythons in the Everglades. If that were to suddenly happen, what would you do the next day?

A: I don’t believe that we’ll ever really get them under control unless we have a strong freeze for a really long time. It’s just like whack-a-mole. We’re in risk management mode, where we’re trying to keep them from spreading out to other areas. I’m also gonna age out of this eventually. But if that were to happen, then I might go right back to buying and selling real estate.

Allie Conti is a journalist who writes both investigative and human interest stories for national outlets like Field & Stream and The New York Times.