8 Easy Ways to Avoid Messing Up on a Turkey Hunt 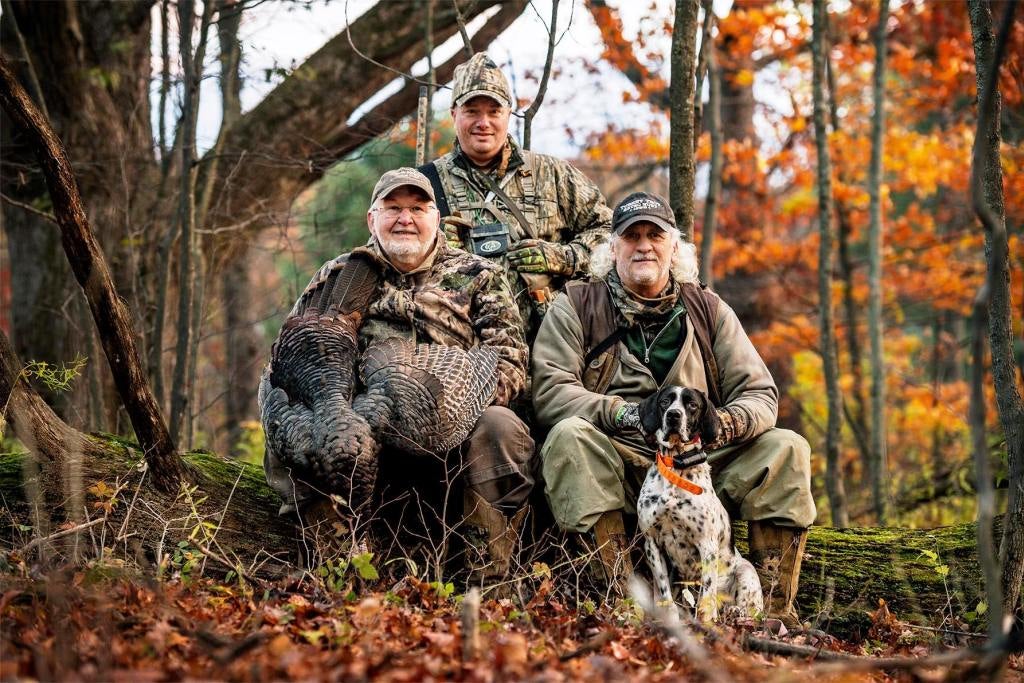 The only stories that beat a fisherman’s “the one that got away” come from turkey hunters. Sometimes, dominant gobblers run into decoy spreads so easily that hunters shoot them in self-defense. Other times, gobblers pull out a few tricks that stump even the most veteran hunter. Guides have good stories because they spend most every day of the season in the woods. Here are some tips from a round up of five professionals who not only hunt on their own, but do their best for folks they take into the turkey woods.

Over 30 years ago, Pete Clare founded Turkey Trot Acres Hunting Lodge in Candor, New York. During that time he’s seen a wide range of hunters from novices looking to harvest a first bird through hard cores looking to close out a slam.

When guiding, Clare makes his clients sit uncomfortably close. “If you’re hunting with someone else, sitting close to each other is absolutely critical,” he says. “When I’m guiding, I want to be so close to a client that we’re touching. Being close means being safe. If double or triple gobbling birds don’t get you excited, then you might want to find another sport. But with that excitement can come a lack of focus and awareness. If a guide and a hunter are spread out then it is very easy to lose contact. Keeping a hunt safe is most important, and that’s easily done by being close.”

“Talk it up, quietly,” Clare says. “A lot of turkey hunters believe that any type of talking is bad. In my experience that’s not true. If your buddy is set up far away and you’re talking loudly, sharply, or on a walkie-talkie, the birds get the message that something isn’t right. If you’re close to your buddy then it’s easy to have a quiet conversation. You can talk about which bird to take, when to take him, or that a bigger bird is sneaking in from behind. Proper communication kills birds because it aligns a guide and a client as a team.”

Lars Jacob of Lars Jacob Wingshooting in Pawlett, Vermont, came to turkey hunting quite naturally. In the 1970s, his father Bart Jacob helped reintroduce Easterns first to Vermont and later to Western Massachusetts. They created a company named Old Jake Products that produced high-quality and custom one-handed slate calls, and recently was inducted into the New England Turkey Hunting Hall of Fame. In the picture you’ll see Lars with a 25-pound gobbler that he shot with a Vermont Underhammer shotgun that he made. The apple didn’t fall far from the tree.

When guiding, Lars believes the ability to sit absolutely motionless especially when calling is critical. “It’s why Dad developed the One Hander,” Jacobs says. “The One Hander is made from locally sourced slate that hangs around a hunter’s neck by a lanyard. Being able to easily access and use the call while remaining stealthy is key to killing more birds. A wild turkey’s sight is significantly better than ours. They want to come to the hen in the easiest route possible. They can’t always define the movement that comes from rustling leaves or the pushing of brush. But if they see or hear rustling that is unusual then they’ll become wary and move along a different path. Movement is more pronounced in more open areas. If hunters set up in a flat, wide-open area so that they can see an approaching bird at 200 yards, then you’ve got to believe that bird can see you at the same distance. When guiding I want clients to be as quiet and motionless as possible, especially when calling.”

4. Be Mindful of Unnatural Noises

“Don’t make metallic noises,” Jacobs says. “The turkey woods are a natural environment, so gobblers are used to twigs snapping and leaves blowing in the wind. Metallic noises are unnatural, and they are not part of their natural world. When a turkey hears one he becomes alarmed. Common metallic noises come from a shotgun barrel hitting a tree, a trigger guard hitting a belt buckle, an excited hunter clicking his safety on and off, or a box call hitting a shotgun’s receiver. A gobbler may not alarm putt and run or fly away when he hears that sound. However, he does know where it came from and since it’s strange and unfamiliar he’ll avoid it. Attention to detail is often the way to kill more birds, and because metallic noises are so subtle, they are frequently overlooked.”

Honesty is the best policy says Missouri’s Brad Harris. Starting with Youth Season hunts, the Realtree Pro Staffer does a lot of guiding for family members, friends, and work colleagues.

5. Let Your Guide Do His Job

“When hunting with a guide or a buddy, it’s really important to be honest about your abilities,” he says. “We’ve all been in the place where we’ve only killed one or two gobblers, so we understand if you’ve only killed one or two birds. If you’re not a good caller, we understand that, too, because there was a time when we weren’t good callers. There is no judgment. The problems come when folks misrepresent their abilities. Guides pattern hunts around what they are told, so if a client tells me that his shotgun or bow is sighted in, then I take him at his word. If clients say they know where to aim to kill a bird, then I trust they will aim where the neck meets the body. I’ve never been upset with a client for missing a bird, but it’s because they hadn’t patterned their shotgun then we should have taken some time before the hunt to do that. If I know they aren’t clear about where to aim on a gobbler we can work on that, too. But I remember blowing a hunt a number of years ago for a client who said he hunted turkeys all over the country. A boss gobbler and hen were in front of us and he was about to shoot the hen. Guides love to teach, so if you’re not sure about something then just ask. We’ll work on it with you for sure.”

Over the past four decades, veteran turkey hunter Gerry Bethge has mentored dozens of young turkey hunters. His primary lesson is to never get ahead of yourselves.

“When bird hunting, getting up on a point requires some hustle,” Bethge says. “But in the turkey woods, rushing oftentimes blows the move. I can’t think of too many situations that calls for a hunter to rush around. There is always plenty of time, way more than hunters might think. For example, if you’ve roosted a bird the night before a hunt then you know approximately where to go for your pre-dawn set up. Knowing that means you can enter the woods calmly and stealthily so the bird doesn’t sense you’re there. If you haven’t roosted a bird then moving slowly toward where you want to set up is equally important. Turkeys have keen eyesight and wary behavior, so if you’re rushing around, crashing through brush, and snaking through briars then they’re going to get nervous. Take your time, ease into the morning, and set up your position. Before you reposition, take a few extra moments to rule out that there are no birds in the area. If you see a few birds move away and rush to get ahead of them you may not realize that a different bird, probably a bigger one, too, is coming in. Take your time calling. Sometimes we get aggressive with hot birds, but most of the time turkey hunting is a quiet, patient, chess game. What’s the rush? If you don’t get him today you can hunt him tomorrow. And what’s so bad about that?”

Stu Bristol, owner of Orion Guide Service based in Lyman, Maine, has been guiding turkey hunters in the Pine Tree State for more than 40 years. The Master Maine Guide and New England Turkey Hunting Hall of Famer says, “The turkey woods are very different from ordinary life.” When hunters enter the woods it’s important to leave ordinary life behind. One that spooks gobblers comes from glare, and that’s something that is a normal part of every day life.

7. Keep the Glare Down

“Glare is man-made and artificial, so they’re not used to seeing it,” Bristol says. “Glare comes from a lot of things we don’t think about in everyday life. Sometimes it’s the reflection of the sun bouncing off the lens of a pair of eyeglasses or sunglasses. Other times it is light hitting non-camouflaged shotgun barrels and receivers. Heck, if you pull out a tin of dip, the sun can bounce off the silver or gold color on the tin’s lid. Glare can come from belt buckles, the crystal of a watch, or the face of a cell phone.”

“Glaring behavior comes about from non-thinking behavior,” Bristol says. “Sometimes it’s because we’re excited, other times we are tired, or still other times we’re just not using our head. Slamming a car door near roosted birds is glaring behavior. Turning on a flashlight in the woods is also glaring. The one that takes the cake happened a few years ago. Turns out a client forgot to turn off the ringer on his cell phone. We were just about to seal the deal on a three-year old bird that was coming in hot and heavy. His buddy called to see how his hunt was going and the dang phone rang. It didn’t surprise me that the bird blew out. Needless to say, I require my clients leave their phones in my truck. Pay attention to the visual glare and glaring behavior and you’ll kill more birds.”