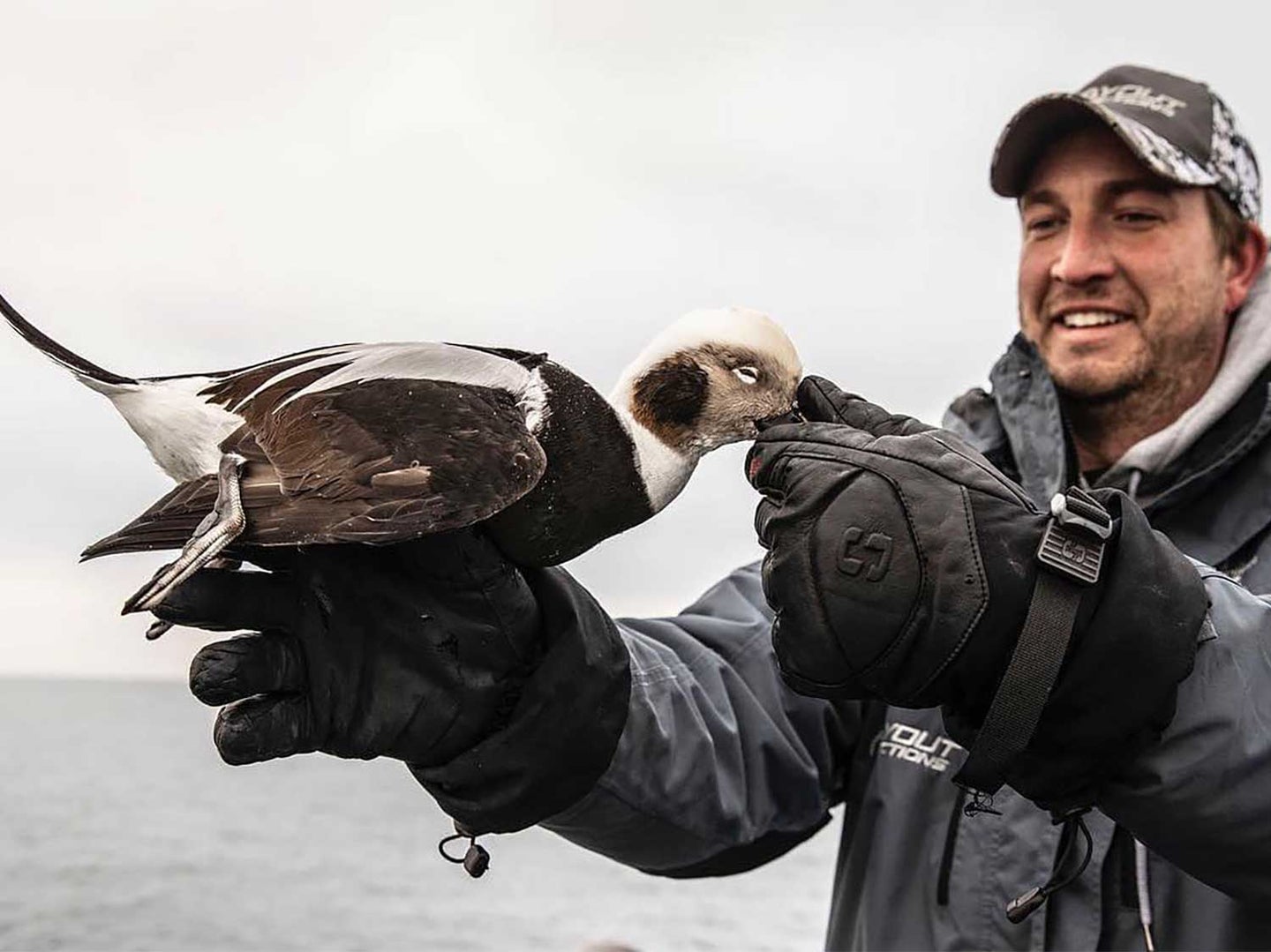 Ducks have seen and heard it all by the time the late season rolls around. Hunters from Canada all the way down to the wintering grounds have been after them for months—and giving them a serious education in the process. It’s no wonder late-season ducks can be so tough to fool. But there are a number of ways to tilt the odds in your favor. I talked with six experts from across the country to get their secrets to success when ducks are at their wariest.

Clay Hudnall, president and co-owner of Field Proven Calls, grew up in Northern Kentucky, right along the Ohio River. As he puts it, there are just enough ducks and geese around to get excited about hunting, but you have to work for them. And with the boat ramp about 700 yards from his office, he puts in the effort every chance he can get.

Because the Ohio River lacks the large sandbars that ducks and geese like to loaf on, it’s fairly unusual to see large groups of geese rafted up on the river. But that doesn’t stop Hudnall from deploying lots of goose floaters in with his late-season duck spread. He believes that the drawing power of the large honker dekes is the key to his success. “I’ve climbed up on the bluffs surrounding the Ohio River. All the way up there, the larger, black-and-white silhouette of Canada geese is much more visible,” he says.

Earlier in the season, Hudnall may use as many as 150 goose floaters with three dozen ducks, but he drops that down this time of year. Most of the mallards are in mated pairs by the late season, so he decreases his spread to match the smaller flock sizes. In the last days of the season, he’ll only put out 60 goose blocks and two dozen or fewer duck floaters, taking care to keep them separated.

“I don’t know if it’s true, but growing up I was always told that geese don’t like to fly over ducks. The way ducks spring straight up makes geese wary of going over them,” explains Hudnall. “Geese have more of a horizontal take off, so ducks don’t seem to be afraid to go right over them. We put our duck decoys on the upwind side of the spread, and set up for crossing shots.”

Mark Goldsworthy spends most of his free time laying on Lake Michigan’s surface, floating under the radar of bluebills, goldeneyes, and long-tails in one of his hand-built Layout Addictions aluminum layout boats. As pressure builds later in the season, he moves even farther offshore where the birds are less affected by the hordes of hunters.

“We may start out hunting bluebills in 10 feet of water, but we can end up as deep as 30 just before the season closes.” Layout boats are his secret weapon, allowing him to conceal himself right out in the open. “The ducks raft up in large numbers now, and they don’t move around so much. So, you need to be right where they are.”

Unlike puddle duck hunters that downsize their spread, Mark goes bigger as the season marches on. He sets anywhere from 10 to 15 longlines and a few decoy rafts, using the large spread to add drawing power and conceal the layouts. He sets the lines so that they run past the layout boats, hooking the tails way out in an effort to direct traffic. The decoy rafts are placed about 10 feet off the bow of the layouts, and one on the approach side to signal safety to incoming ducks and to help the hunters disappear.

When an opportunity arrives, don’t hesitate, says Goldsworthy. “Late-season ducks don’t circle and give you multiple chances like they do in the early season. If you get an ethical shot, you need to take it.”

Pat Pitt, founder of Arkansas’ renown L’Anguille Lounge Duck Club, is one of the few folks alive who has heard the hollow thunder of Bo Whoop 2 as it echoed across Beaverdam Lake. Dr. William “Chubby” Andrews, friend and gunning partner to Nash Buckingham, befriended Pitt when he was just a kid. Pitt gunned every Thursday and Saturday religiously at the famous Beaverdam Club, sitting alongside Andrews, who used Buckingham’s second-favorite shotgun after the famous hunter’s passing. Pitt has learned a lot since he started way back in 1963, not the least of which is how to blow a duck call—and when not to. As Buckingham once said, “A duck call in the hands of the unskilled is one of conservation’s greatest assets.”

“Forty-two highballs in a row just don’t happen,” Pitt says, noting that real hen mallards tend to have less of a flair for the dramatic than the folks trying to imitate them. He doesn’t have disdain for contest callers, but several decades of gunning pressured ducks has shown him that less can be more. This goes double in the late season, as birds have heard just about everything by the time they make it down to Pitt at L’Anguille Lounge. “You have to give them a chance to react. Don’t hit them with too much, too fast.”

Just as important as sounding like a duck is reading their reactions. “Pay close attention to the wings, and only call as ducks are starting to turn away,” explains Pitt. You can up your odds by working as a team with the other members of your party, taking care to sound like a gaggle of feeding ducks and not calling in unison so you sound like “some sort of Tabernacle Choir.”

Stale ducks can be difficult to hunt, but it’s a reality that Captain Phil Gay faces every season. Gay has been guiding on Long Island’s East End since 1973, an area that winters a lot of the East Coast’s waterfowl. He has a problem most of us would love to have—he’s covered up in ducks. His farms receive evening flights numbering in the thousands. One of the keys to being able to hunt many of the same birds right up to the end of the season is staying hidden.

“The most important thing in duck hunting is the hide. It doesn’t matter how good of a hole you’ve got, if the ducks see you they’re not coming in.” Gay is known for the quality of his blinds, and he puts an impressive amount of attention to detail into keeping his clients concealed. “I’ve got about 30 hours each into grassing them. They have to blend in perfectly to keep shooting distances down to 10 or 15 yards.”

You probably don’t have a thousand acres to dedicate to ducks, but you should put as much effort as possible into concealment. While raffia grass and the like can form a good base on blinds, you need to blend in seamlessly to disappear. This can only be accomplished by using natural vegetation from the surrounding area. Just take care not to alter the landscape right next to your hide.

Mario Friendy grew up in Pennsylvania but now lives on the West Coast where he serves as Vice President of Brand Innovation for Final Approach Waterfowl and owner of Columbia River Decoys, Inc. While there are things he misses about the East, 107 days of duck season sure helps ease the pain of skipping Faschnaut Day. Hunting the equivalent of two seasons every year gives him plenty of time in the blind, but it also gives the birds twice the education. To consistently score, Mario puts all of his faith in his decoys. But that doesn’t mean he uses a lot of them.

With all of the water in Oregon, Freindy finds that the birds are really spread out by January. After being shot every time they try to dump in a hole with a couple dozen counterfeits, ducks grow leery of large gatherings. To imitate what he sees the ducks doing naturally, he really downsizes his spread.

“I might go in with just a pair of mallards on a jerk cord, but I’ll usually throw in a pintail, widgeon, spoonies, or even teal to mimic what I’m seeing around here,” says Friendy. He also takes great care to ensure these are the nicest decoys he has, washing them off after each hunt. He wants them to imitate the super-prime ducks of late January, and he’s letting them do all the heavy lifting. “I set them really far apart from each other. Even with live ducks, they tend to land really wide.”

“You’ve got to pivot with the birds.” Friendy adds, noting that calling style should shift as well. “I’ll abandon mallard calls and go to whistles. The ducks aren’t as used to hearing pintail or widgeon calls from hunters, so they don’t associate it with danger. Plus, it’s what you would hear out there anyway.”

Dale Humburg spent 30 years as Missouri’s waterfowl biologist before signing on as a senior biologist at Ducks Unlimited over a decade ago. He’s been an avid duck hunter for much longer, starting his apprenticeship in his dad’s duck boat in 1955. He currently resides in Missouri, on the western edge of the Mississippi Flyway. Humburg is a puddler guy, with a big preference for mallards. To find ducks late in the year, he concentrates his efforts on high-energy food sources.

“In the early season, ducks are looking for a varied diet to build on the nutrients needed to complete the molt and continue migration. After migratory flights, they seek to replace reserves lost on their migration south. Later on, they switch almost exclusively to a high-carbohydrate diet, so called ‘hot foods’—think cereal grains such as rice and corn—to survive late-season weather.”

But food is only one part of the equation, and hunters need to stick it out if they’re going to score on the really cold days that typify the late season. The morning flight will be delayed, so head out later and then sit tight until the ducks move. “It all comes down to energetics. To survive, ducks are constantly changing their behavior. On those really cold mornings, they will severely limit the energy they burn.” That means the birds are not apt to fly until the day warms up a bit.

Making ducks burn excess calories is a sure way to send them packing, so Humburg leaves roost and “refuge” areas alone in the late season. For consistent hunts now, he concentrates on smaller bodies of water between the roost and a feeding area, as well as the fields themselves where late ducks are taking advantage of the hottest foods.