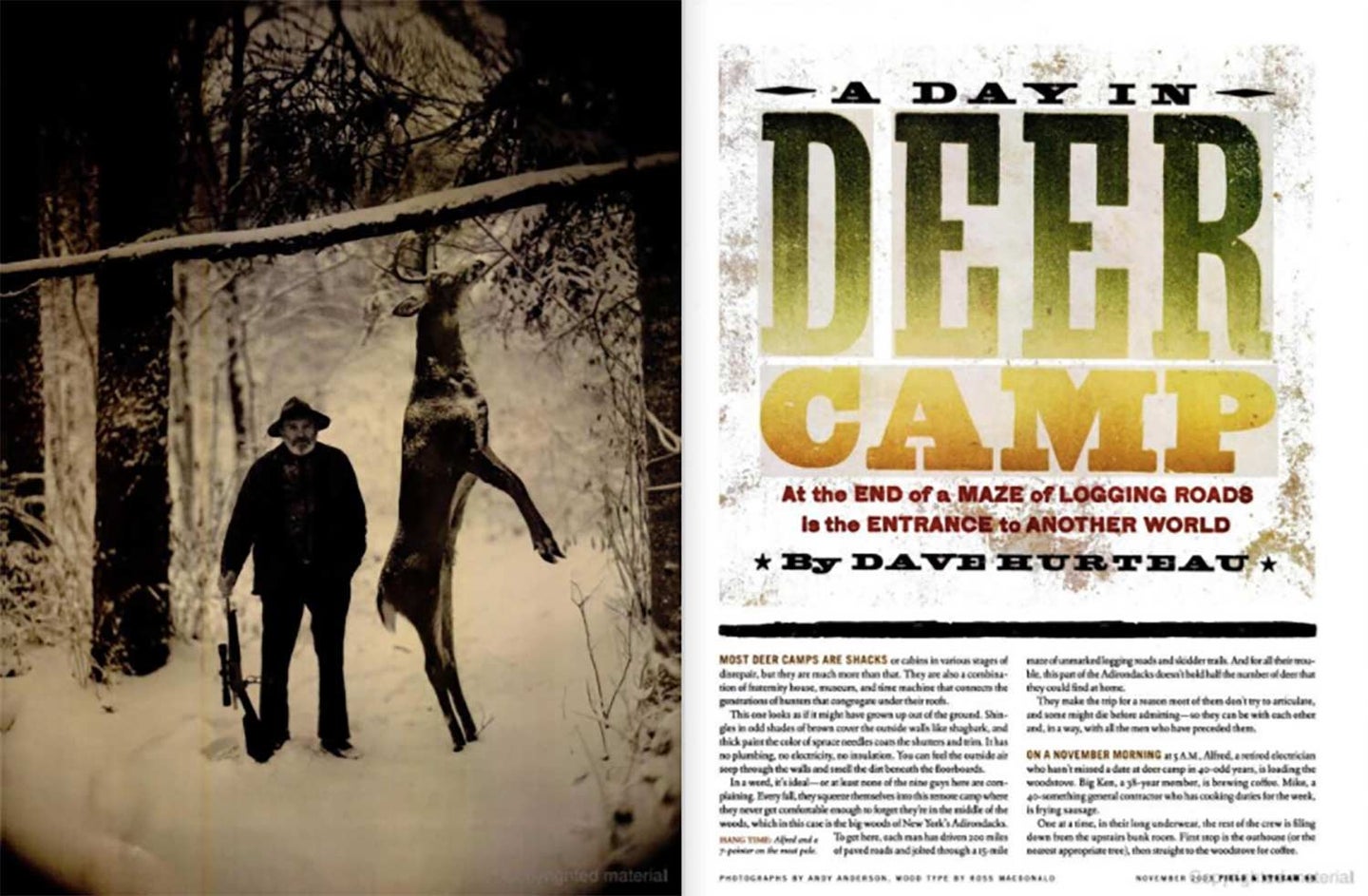 An Adirondack hunter hangs a 7-pointer on the meat pole. Field & Stream
SHARE

To celebrate the 125th anniversary of Field & Stream, we’re going to share some of our favorite stories from the history of the magazine. Every day for the rest of the year, we’ll republish a new F&S Classic on the website. Today’s entry, “A Day in Deer Camp” by Dave Hurteau, was published in November 2003. You can find the complete F&S Classics series here.

Most deer camps are shacks or cabins in various stages of disrepair, but they are much more than that. They are also a combination of fraternity house, museum, and time machine that connects the generations of hunters that congregate under their roofs.

This one looks as if it might have grown up out of the ground. Shingles in odd shades of brown cover the outside walls like shagbark, and thick paint the color of spruce needles coats the shutters and trim. It has no plumbing, no electricity, no insulation. You can feel the outside air seep through the walls and smell the dirt beneath the floorboards.

In a word, it’s ideal-or at least none of the nine guys here are complaining. Every fall, they squeeze themselves into this remote camp where they never get comfortable enough to forget they’re in the middle of the woods, which in this case is the big woods of New York’s Adirondacks. To get here, each man has driven 200 miles of paved roads and jolted through a 15-mile maze of unmarked logging roads and skidder trails. And for all their trouble, this part of the Adirondacks doesn’t hold half the number of deer that they could find at home.

They make the trip for a reason most of them don’t try to articulate, and some might die before admitting-so they can be with each other and, in a way, with all the men who have preceded them.

On a November morning at 5 A.M., Alfred, a retired electrician who hasn’t missed a date at deer camp in 40-odd years, is loading the woodstove. Big Ken, a 38-year member, is brewing coffee. Mike, a 40-something general contractor who has cooking duties for the week, is frying sausage.

One at a time, in their long underwear, the rest of the crew is filing down from the upstairs bunk room. First stop is the outhouse (or the nearest appropriate tree), then straight to the woodstove for coffee.

Pocket, a Harley-riding welder variously called Dan, Danny, Pocket, Hardware, and Fix-It, is leading the way and, as usual, toting half the gear in a Cabela’s catalog. Next come Big Ken’s sons, Paul and Dave; then Dickey, Bates, and Mike’s brother Steve. They are light-haired and lanky, and Paul walks as if he was constructed from a box of loose hinges.

There’s a short, obligatory debate over who was snoring the loudest and who was stumbling around the kitchen at 3 A.M. After the rundown of who’s hunting where, everybody grabs a rifle and heads for a rendezvous with a deer.

The woods here go on and on. They ride the ridges and valleys into the distance and to another time when loggers hauled timber to the river behind draft horses, and the founding members of this camp first paddled in to hunt in 1908.

This is a place that changes without ever changing much. There are some new cuts, but there have been new cuts for more than a century. By and large, the same beech and maple ridges still overlook the same spruce and pine lowlands.

The camp’s parcel of leased paper-company land spans 1,600 acres and abuts more than 3,000 acres of state land. If you get lost and make the mistake of heading north, you’ll have a 30-mile hike to the nearest road. (No one has ever gotten seriously lost. Hunters understand that if they get turned around, they simply head south until they hit camp.) But you need only step off the trail to feel you’re in another world. In the silence, the timelessness of this place is palpable.

A buck is hit. There’s a difficult tracking job ahead, and the twoway radios are buzzing. The operating principle of the camp is that all work is shared. In no time, every member abandons what he’s doing and pitches in, and no one quits until the 7-pointer is suspended from the pole.

After the buck has been hung, there’s a round of handshakes, then the crew heads inside, where Pocket reaches into a kitchen cupboard and produces a bottle of Jack Daniel’s. (Every hunter in camp must bring a bottle of booze, not because he has to drink-there are guys here who never touch the stuff-but because if he kills a deer, he has to buy the drinks for anyone who wants one.) He plunks it on the counter and announces:

It’s the way these men have shown their gratitude for as long as anyone can remember.

After dinner and dishes, the crew retires to the living room and crowds around the woodstove. Here, propped on shelves and hung from exposed studs, is paraphernalia from every decade of the last century: tin sugaring pails, bucksaws, ropes, pulleys, scales, antlers, fish skulls, and, most prominently, photos, In yellowed black-and-white prints, hunters in flared pants and boots that lace to the knee hold lever actions in the crooks of their elbows and pose beside rows of bucks hung from the meat pole. In faded Polaroids, recent color prints, and even digital printouts, roughly the same scene repeats itself again and again. It’s a snapshot history of almost 100 years of hunting this land, in which only the rifles and the faces of the hunters change.

Alfred, who in his wool pants and suspenders looks as if he might have stepped out of one of the yellowed prints, is pointing to faces in the pictures. These are he guys who built this camp. They were a group of Rochester professionals-lawyers, photographers, and whatnot. Back in 1908, they paddled in and hunted from canvas tents on the bank of the river just upstream of here. They built that kitchen area in ’12, then this room and the upstairs bunk went up in 28.”

Alfred takes a seat on his bunk beside the woodstove, slides his boots off, and hitches his thumbs under his suspenders. “You know we had a bear break into this place in ’68. Came right through that door, and into the kitchen, where he opened the cupboard, peeled the lid off a container of Tang, and licked the contents clean. Then he walked into the boathouse and bit into a can of lighter fluid. I guess he didn’t like that, because he ran right through the boathouse door and headed for the river.”

Alfred stands up to light one of the propane lanterns that illuminate the camp. I mention how old the lanterns look, and he says, “Oh no, these are new. We put these up in ’63.” He sits back down. “You know in ’78 we shot one buck for every day of the week. Take a look at that picture right there…”

Outside on the front porch, Big Ken has stepped out with a cup of coffee. He looks past the big white pine to where, under a bright moon, the river cuts a black swath into a long, gray vista of wilderness. From here, the hardwoods seem to sweep over every hill, connecting the distant ridges with the near ones. Big Ken sips his coffee, then looks again toward the woods where he once hunted with his father and now hunts with his sons. “There’s something about this place,” he says. “Ain’t there?”

And if they were here to speak, all the men who have shared this camp over the decades would answer, “Yes, there is.”