What Happens When a Wounded Deer Vanishes?

When a doe disappears onto a neighboring property, all signs point to a lost cause. But the author can’t let her go 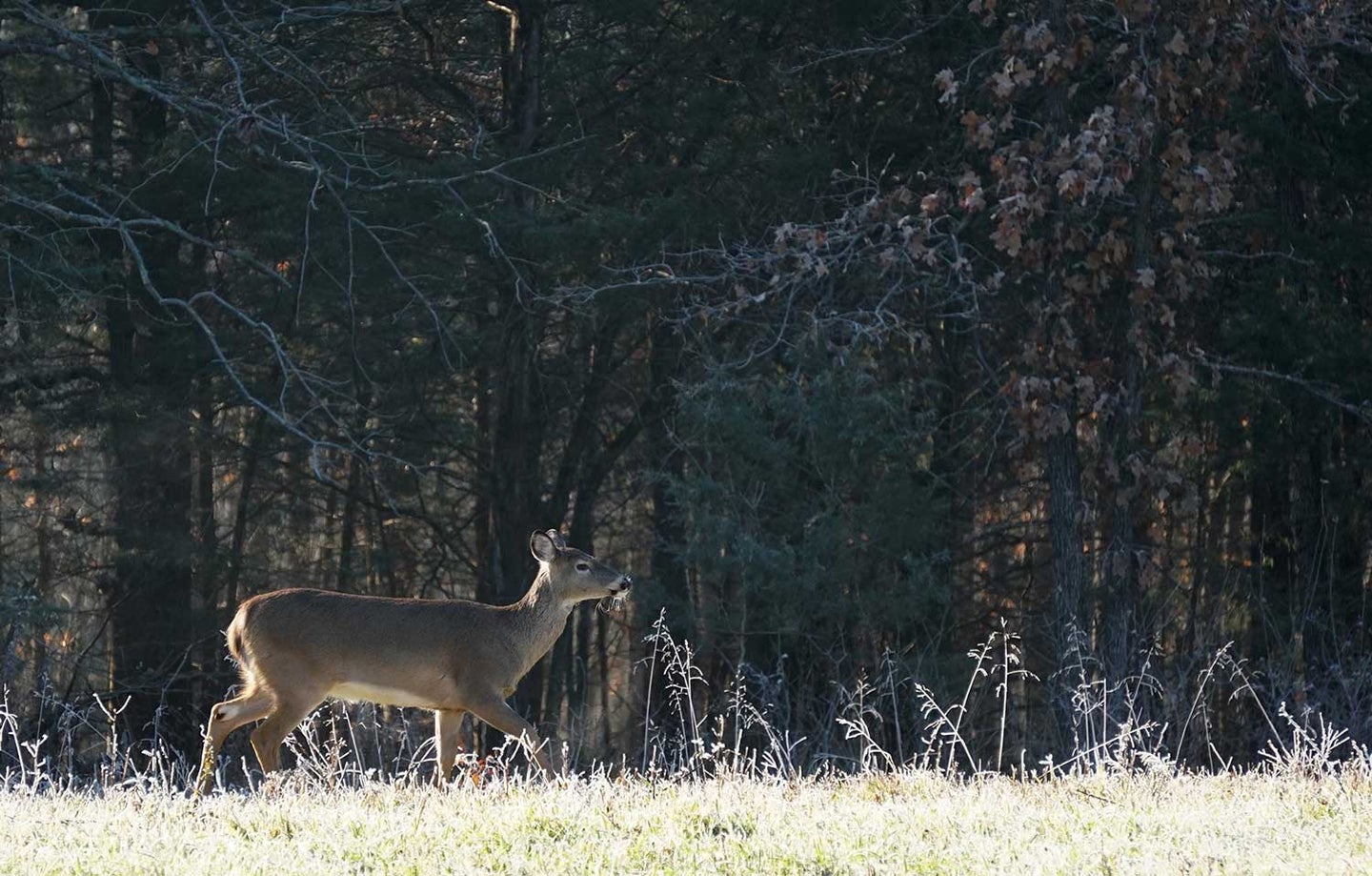 A whitetail doe walking through a field during the daytime. Natalie Krebs
SHARE

I’m already on my feet when the first deer pokes her nose into the food plot. The rest of the does and fawns appear in the clover one by one, trickling from the timber to the tall grass and then into range. They drift toward a nearby cornfield, and I let them go, hoping a buck might appear on their trail. If not, I’m content to wait for another doe.

I’m in a great spot, leaning against the trunk of an old white pine, standing on a sturdy ladder platform. Pine boughs shield everything but my head and shoulders from the deer below. I consider folding down the stand’s half-seat, but there’s no cushion for the metal frame. Just as well. I’m restless, and it feels like a good night to shoot a deer.

This farm is the place to do it, too. It’s a well-managed oasis in a pressured county—exactly the sort of spot an inexperienced bowhunter would love to get permission on. I met the landowner at a conference the year after I moved east from Missouri. When Craig Dougherty heard my plans to hunt public ground just north of New York City, he laughed.

“There aren’t any deer there,” he said. “Come up this summer.”

So I helped him string fence and till a food plot. He checked that I could shoot my bow. At the time, I had only a few archery seasons ­under my belt. Craig—who founded Golden Eagle Archery ­before I was born and had killed more deer with those bows than with a rifle—seemed satisfied with my accuracy, even if he didn’t think much of my budget compound. He invited me back that fall.

All summer, I stressed about the hunt. There’s an outdoor archery range in New York City, but it requires two bus rides and a half-hour walk to reach. I shot inside my cramped apartment, but that did little for my range. So when I returned for bow season, it was with some apprehension. I limited myself to 25 yards and killed a doe at 20. Craig declared me competent, and told me to come back next year.

Even if You Know Where to Shoot a Deer, There’s a Chance it Will Run Away

This is my second season on the farm. It’s unseasonably warm, and the does are moving slowly when they return an hour later. But one picks her way over, and I reach for my bow. She stalls at 45 yards as dusk creeps into the woods, slipping through the branches and settling into the soft ground around us.

Then she’s walking again, closing from 40 yards to 35, then 30. She stops at 20, just behind the crown of branches radiating from the tree. Needles block everything but her head. There she stays, taking bites of clover and only the occasional step. Come on, I think, willing her to cooperate. Just a few more.

But it’ll be dark before she gets clear, and the other does aren’t coming any closer. Why didn’t I trim the tree this summer? If I was taller, I could shoot over these branches.

It takes a full minute before that last thought actually registers. I feel stupid for not thinking of the seat sooner as I lower it, then brilliant for thinking of it at all. I check my harness, carefully set both boots on the step, and grow by a foot. There’s a perfect line of sight to the doe. She’s quartering away slightly as I draw. When my pin drifts behind her shoulder, I trip the release.

The whoosh of the arrow is followed by a loud crack. As she races into the trees, I can see the arrow flopping at her shoulder before she disappears. The satisfaction of what felt like a good shot fades with her, replaced by silence in the woods and that smacking sound reverberating inside my head.

Lights swing across the timber as I search for blood, head down and shuffling along the field edge like a kid kicking a can. I squint into the headlights and walk around to the driver’s side to find Craig. He clambered into his truck as soon as I texted, but with two bad knees unable to support him on the uneven ground, he can’t get out to help.

I deliver my bad news—no arrow, no blood—and he delivers his.

“She ran onto the neighbor’s. Let’s get dinner and talk it over.”

Craig presses me for details as we drive into town, and by the time we slide into a booth at the Killbuck Inn, he’s convinced the doe will live. We order and I look around. This is a hunter’s pub, one of those unofficial sponsors of deer season. The pine-board interior smells like hot grease, and it’s plastered with beer signs. It’s also packed with locals, every one of whom our waitress seems to know.

“I’m sorry,” Craig says. “But that deer is long gone.” His diagnosis makes me slump in my seat. Craig is one of those old men who fully embraces the pass society grants him to speak bluntly. Polite company might find him offensive, but I like Craig precisely because he says what he’s thinking. He loves a good discussion. Occasionally, he even admits when he’s wrong. And he would never tell someone they’ll find a lost deer just to make them feel better.

“What if that deer is dead?” I say, more wishful than anything. “What if I hit the lungs, and that noise was the opposite shoulder blade?”

“Maybe,” he says, not unkindly. “But I don’t think so. It sounds like you hit her in the near shoulder. You’re not going to find her.”

Craig’s certainty causes what little confidence I had in recovering the wounded deer to disappear entirely. I’ve been hunting deer with a gun long enough that I should know a lost cause by now. By the time I finish my beer, I concede that it’s hopeless. But we still need to look for her. “So,” I ask, “what’s the deal with the neighbor?”

When You’ve Got a Wounded Deer on the Ground, Don’t Give Up

The next morning finds me in the same stand, waiting to see if an injured deer returns to the plot and checking my phone every 10 minutes to see if Craig has heard from the landowner. It’s misty, and I’m worried it’s going to storm.

The longer I sit here, visualizing last night’s hunt unfold, the more disgusted I become with myself. It doesn’t matter if the rain comes. I’m not going to find her. Today my solution to the line-of-sight problem seems foolish. In my race against the dark, I forced the shot, and wounded a deer in my impatience.

The pressure of the morning builds—warm temps, marauding coyotes, the threat of rain, the urge to look for blood before it falls, the panic that we won’t get permission, the guilt of a poor shot—until I can’t take it anymore and climb down.

Daylight doesn’t reveal any blood in the food plot, or my arrow, so I skip ahead to the woods. There’s a conspicuous POSTED sign just inside the treeline. A few obvious deer trails vanish beyond it. I inspect the first, then the second. On the third, I find blood. It’s not ­promising—just one splat the size of a raindrop. A foot beyond, an even smaller drop. I step forward until I’m teetering on the property line. I text Craig with the development and wait, glassing the woods.

Read Next: 5 Top Blood-Trailing Tips From a Master Tracker

The neighbor, it turns out, is a guy named Snake, which is nearly explanation enough. I can understand why Craig is reluctant to put himself in debt to a neighbor he doesn’t get along with for a deer that won’t be found. But we have to be sure. ­Finally, the temptation to follow the trail grows too strong, so I mark it with my hat and retreat to the cabin.

I’m pulling arrows when my phone buzzes. Craig thinks the blood is insignificant, a spot where the doe stood dripping into the leaves before moving on with her life. “What if she blew through there?” I text back. Eventually, my phone rings.

“Well, I talked to Snake,” Craig says. “You can go look. If the blood runs out, come back onto our place.”

I’m already running out of camp by the time we hang up. Even with the hat for a waypoint, it takes me so long to locate the blood trail that it begins to seem I’d only imagined it. When I do find that first splat, I use neon tape to flag it. I mark the second drop, too, and then look for the next. I rip off more tape, working like this for 20 minutes. Each drop is tiny, and I’m covering just feet at a time, absorbed, watching where I set my boots. The humidity builds, and I’m sweating now, pushing through the undergrowth and flagging twigs until the woods looks like a construction site. When I’ve covered 50 yards and the dense brush begins opening into old-growth trees, I lose the trail.

Now it sinks in, all the way. Craig was right. It’s just a little blood that doesn’t go anywhere. How long do I look until I’ve fulfilled my obligation to the deer? How long can I look before breaking my promise to go back if the blood runs out? I widen my search, so far that I have to backtrack to the last flag. That’s when I notice how the flags line up through the trees—almost in a perfectly straight row. This time, I ignore the ground near my feet and turn, looking beyond the markers. Another 50 yards away, at the end of the imaginary line, the gray curve of a belly rises just above the brush.

Even as I kneel beside the dead doe, I’m surprised she’s here. Finding her is so unexpected that I’m more shocked than relieved. There’s anger, too, though I can’t tell if it’s with myself or the situation. I was sitting in a stand all morning while she was lying here all night.

I gather both hind legs and drag the doe back onto Craig’s land. The whole thing feels unreal, even as I gut her. When I cut the sternum, I can see my snapped arrow spanning her rib cage—through both lungs. The broadhead is buried in her opposite shoulder.

It’s not until I’m hauling my deer back to camp that it registers. The weight at the end of the drag rope feels real enough, and the work cheers me. When I reach the skinning shed, Craig is waiting. His face splits into a grin as I haul her right in front of him, and drop the rope, sweaty and grinning myself.