Bad-weather days are good for waterfowl hunting, and they’re even better when nobody gets hurt. Here’s how to stay safe and shoot a limit 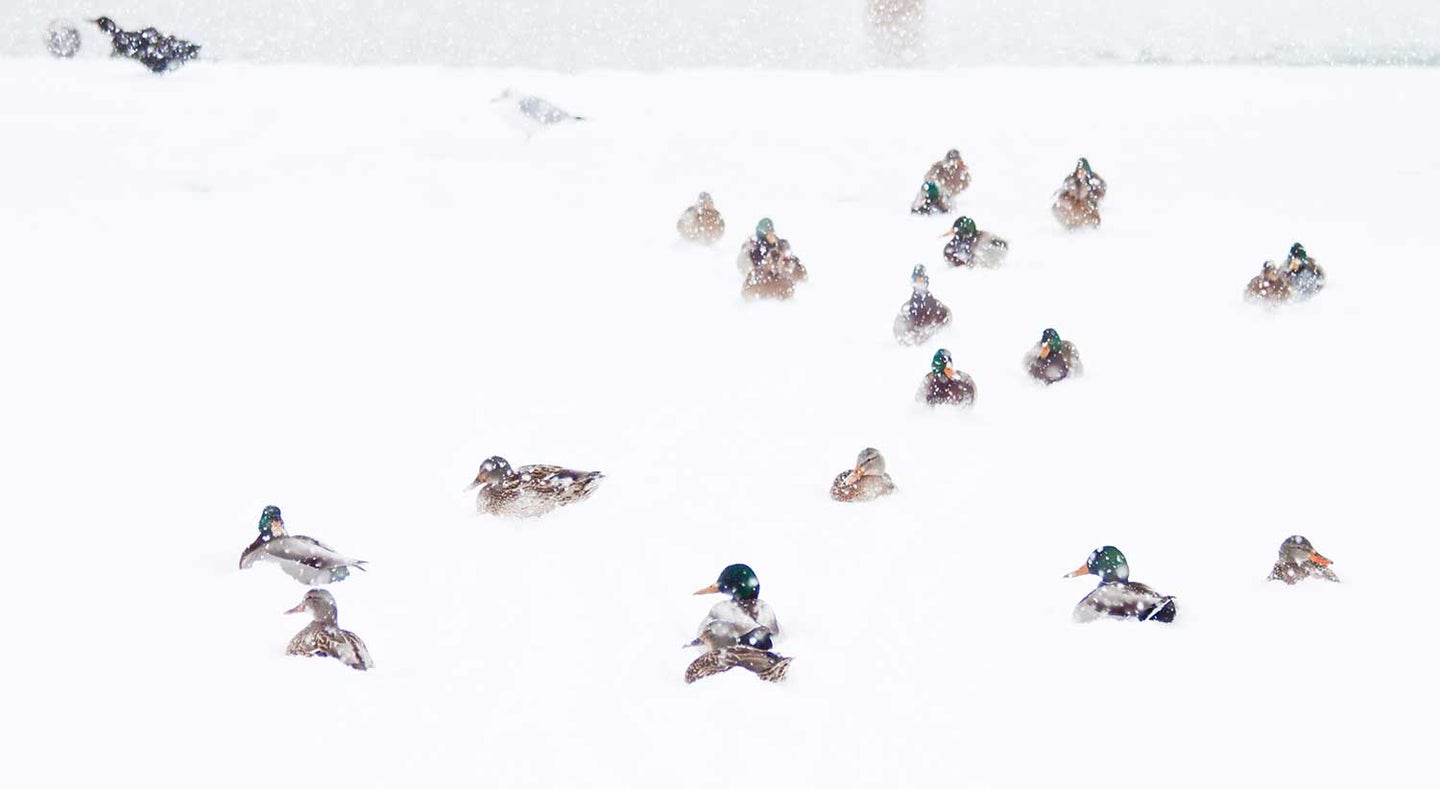 Snowstorms are one of the best times to hunt ducks during the late season. wollertz via depositphotos.com
SHARE

A single greenhead floated into our spread like a falling sheet of paper and touched down feet first. Nobody shot. He looked around at the decoys, saw our four faces peeking through the marsh grass, and slowly moved on. It didn’t matter to us. Hanging behind our canvas panel blind were two full duck straps. It was barely past 10:00 a.m., and we were sitting on a four-man limit of mallards.

When my alarm buzzed I could barely see out my bedroom window. The snow was falling sideways and everything about the weather said, stay home. When I got out to the driveway—or where I thought my driveway was—there was over a foot-and-a-half of snow on the ground and more falling fast. Dressed in my jacket and waders, I shoveled snow and cleared off my truck one big scoop at a time. No matter what I did though, I knew I was going to be late.

Everyone else in our group was already on their way to the launch. We were headed to a tidal flat on the Hudson River. The tide was perfect, and the weather couldn’t be any worse. It was one of the last hunts of the year, and hopefully a good one.

Four days before, we almost got skunked in the same spot. It was nearly 50 degrees, and I was dressed in fishing waders. We had put out a huge spread of divers, puddle ducks, and Canada geese, but no matter how many birds flew by, we only had one mallard come in for a closer look.

The morning of the storm felt different though. As I paddled my canoe towards the blind, I heard ducks and geese calling through the storm. When I got there, I could barely see beyond the spread, but by first light, a pair of divers appeared from the snow and fog. All of the sudden, they were right in our face. My friends Aidan and Gabe shot and brought both ducks to the water. After that, it was like clockwork.

Every bird that flew by was drawn to our decoys like a magnet. The river was one of the only patches of open water around, and the storm had the ducks moving. They’d come in, wings cupped—in twos, threes, and fours—and we’d pick them off a pair at a time. Close to the end of our limit, we dropped two banded drakes, and it didn’t take long before we had to pick up and go home.

How To Stay Safe When Hunting Late-Season Ducks

Late-season snowstorms can provide some of the best duck hunting action of the year. There’s little competition from other hunters, and more birds are being pushed from north to south. But hunts like this can be dangerous as open water, high winds, and small boats don’t mix very well. If you don’t want a duck hunt to turn into a survival situation, try some of these tips.

Give Yourself More Time Than Usual

During our hunt, we took our time getting to the blind, and every step of the way we took stock to make sure we weren’t putting ourselves at risk. My friends all woke up early enough to account for extra shoveling and slow winter driving. And even though I didn’t, I wasn’t going to pressure myself to get to our spot before first light. If you’re running late, know that you’ll get there when you get there. If you’re on time, take a few extra minutes to double-check that everything is in order before getting into your boat or wading into the water. And if you’re hunting in a group, don’t pressure anybody to hurry up or man up. That’s how people get hurt.

Read Next: Tips for Turning Around a Late-Season Duck Hunt

Be Familiar With Your Surroundings and Your Gear

The spot we were hunting was familiar to us. We had been there before in the daylight and knew how to access it without a hitch. If you’re planning to hunt in a winter storm, pick a spot you have either scouted heavily or hunted before. Tell someone back home where you’re going to be, and make sure you have things like fresh flashlight batteries, a PFD, and a way to signal for help. The night before bad-weather hunts, I like to lay out all of my gear and check if everything is working. Winging it is not an option. When you get there, if it’s too windy, snowy, or the water is too rough, wait until it gets light out to get in the boat, or don’t go out at all. No amount of good duck shooting is worth having an accident over.

Watch the Water and The Tide

The Hudson River and the small creeks and flats on its edges are a tidal estuary. If the tide isn’t right and you’re in a canoe or kayak, it can make for some pretty nasty paddling. For this hunt, we made sure we set out on a slack tide, meaning it wasn’t coming in or going out, and for the rest of our hunt it was falling. If you’re hunting in places where the tide matters, keep an eye on it. If the tide isn’t a factor, you still need to know how strong the current is if there is any, and what your boat’s limits are. Get familiar with your boat in the summer when the water is warm and you don’t mind taking a dip.

The middle of a snowstorm is not the time to hunt solo. There’s just too much that can go wrong. Try to hunt with at least one other person, and if you can, bring out two boats. Skip the mile-and-a-half long paddles or hour-long runs, too. You won’t have to get away from the competition on days like this, so pick a spot that you can either walk to or one that’s only a short distance from the launch.

In 2019, F&S interviewed a survival expert about the things he was most concerned about in the woods. The top of his list: cold-water immersion. If you get soaking wet in freezing temperatures and have no way to warm up, there’s a good chance you’ll die. But a dry set of clothes can prevent that from happening. Take some old hunting clothes like a synthetic down jacket, wool sweater or fleece, baselayers, and socks and stuff them into a waterproof drybag. Keep this bag in your duck boat and make sure everybody knows where it is. If someone accidentally takes a swim, swap their wet clothes out for the dry ones. Tossing some matches and tinder in the bag isn’t a bad idea either in case you need to build a fire on the bank to warm up.

The Best Gear for Hunting Ducks in a Snowstorm

Late-season weather dictates late-season waterfowl gear. You need a duck hunting shotgun that will work no matter what, warm clothes to give you staying power, and tough decoys to stand up to mud, ice, and snow. Consider adding some of the following to your kit, so you can hunt down to the last day.

These decoys are made of soft rubbery plastic and designed to be crushed for easy packing, like some turkey decoys. They’re lightweight and move like the real thing in the water, and they really come through when it’s snowing. Because they’re pliable, you can just pick them up and smack them a few times with your hand to get the snow off of their backs. This keeps your coat sleeves dry and keeps the decoys from building up too much ice from dunking in the water. The paint jobs and head positions are spot on, too.

Read Next: How to Hunt Late-Season Ducks in Stubble Fields

My advice to anyone who wants to hunt to the bitter end of any hunting season is to invest in high-quality wool base layers. Wool can keep you warm even when it gets wet. I’ve been wearing these for a few late-season whitetail hunts as well as waterfowl hunts, and they’ve kept me warm no matter what. Coupled with an additional heavy-weight, half-zip base layer, they allow you to wear less bulky clothing which makes for a better shotgun mount.

A big reason I felt comfortable enough to paddle into a snow squall was because of my boat. The Solo Sportsman 119 is not for big-water duck hunts, but it’s perfect for tidal creeks and the small freshwater streams that tend to stay open during the late-season. It’s stable because of its wide hull and sit-inside design that lets you paddle it like a kayak while sitting on the floor. It has enough room for two dozen decoys, a blind bag, and a shotgun. When you get to shore, it’s easy to move around due to its lightweight, and it hides well in tall grass. There’s also plenty of info online about how to outfit one with a layout blind.

These are the waders I break out when I know the temperature won’t be above freezing all day. I haven’t been cold in them yet. They’re quilted on the inside, and the boots are insulated with 1600 Grams of Thinsulate. They’re cut with a little extra room, so it’s easy to tuck in a coat and a few extra layers to keep them dry. They also make killer late-season bibs for field hunts.

This is the hunt where you’ll want to leave the fancy stuff at home. A straightforward pump-action shotgun like a Mossberg 500, Remington 870, or Winchester 1300 is easy to use with gloves on, and can take some abuse. You could also go with a rugged over-under or side-by-side like a CZ Bobwhite. Either way, you want a gun with as few moving parts as possible. And while you’re out there, cycle the action and safety on your gun every now and then. All guns can freeze up no matter how rugged they are.