How to Shoot Fast-Flying Birds

The trick to dropping fast birds is to slow down 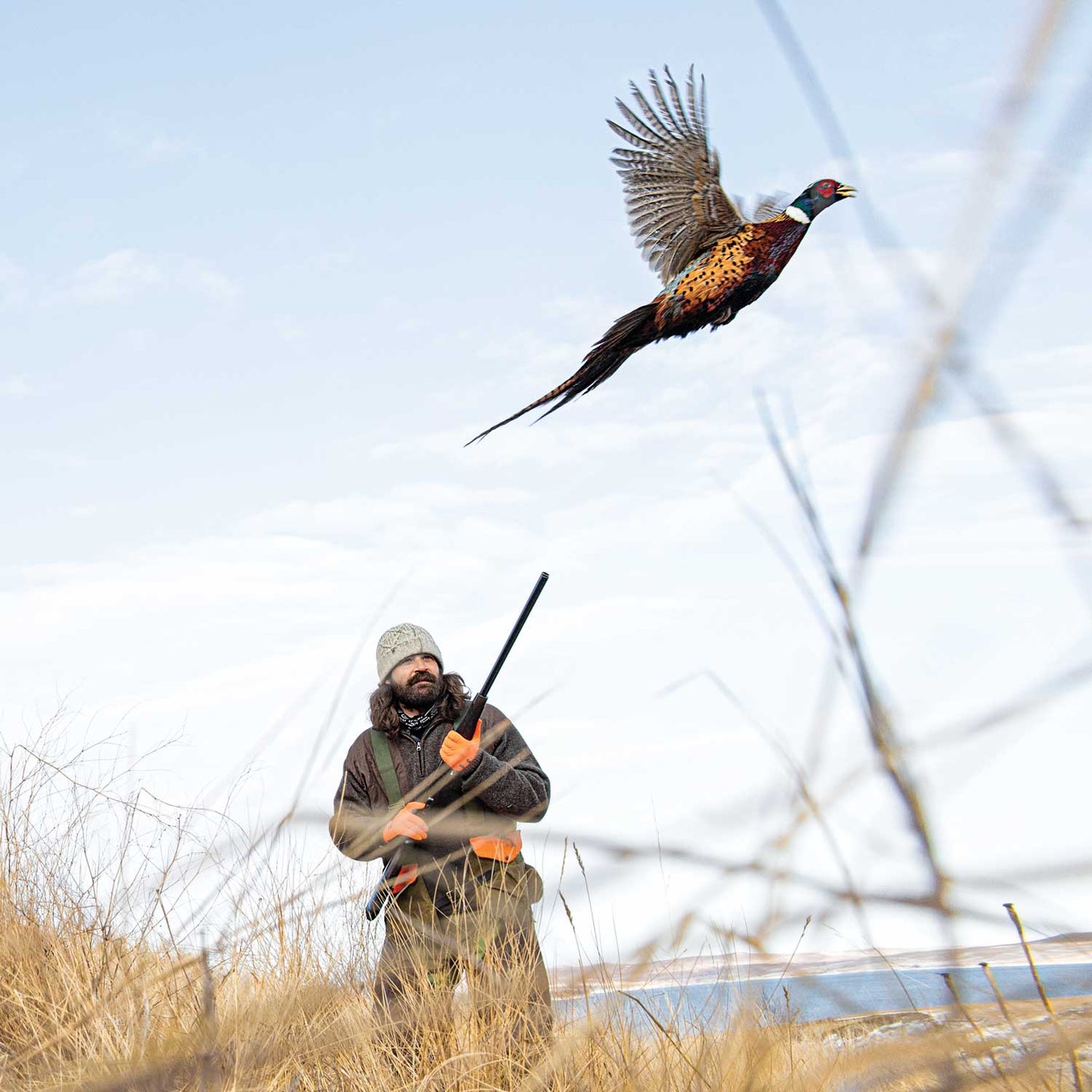 Most hunters move too quickly when a bird flushes. A friend once emptied an unplugged Benelli at a ringneck pheasant that had jumped up at our feet. The rooster was still in range when his gun spit out the last smoking hull. So, I mounted my gun and shot the bird.

Take a deep breath and do the math: A flying pheasant—one of the faster upland birds—might hit 40 mph. That’s 58 feet (19.3 yards) per second, which means almost any gamebird that flushes at your feet will take at least two seconds to fly out of range. Even a bird that flushes 15 or 20 yards ahead gives you a full second to work with. That’s plenty of time if you learn to use it wisely. The trick is to move neither too quickly nor too slowly—to learn how to mount the gun and shoot with a rhythm and timing that gives you the best chance to connect. Here’s how.

Ready for Your Close-Up

It should probably go without saying that when you’re hunting birds, you should expect to see some. Yet upland hunters are often startled by a flush, which is an excellent first step toward a rushed shot and a miss.

You might walk all day for only a couple of chances, and you never know when they’ll come. You have to be ready, but you can’t remain in a state of white­knuckle alertness for hours. Remember the first time you drove a car? If you were like me, your forearms hurt after­ward from squeezing the wheel. Now when you drive, you’re relaxed, but your eyes are looking far down the road, and one small part of you is ready to react. That’s what walking in the uplands should be like. Cultivate that state of casual alertness, and you’ll be ready when the time comes.

Being ready buys you time, so use it. If you mount your shotgun as quickly as possible the moment a bird flushes, you won’t consistently hit where you’re looking. This is simple enough to prove to yourself if you’ve got a dirt bank handy. Set a target on the bank 20 yards away, and then mount your gun and shoot at it as fast as you can. Chances are, you’ll spray shot every­where except where you intend.

When I tried this drill several years ago at a clinic, my shots went all over a 3-by-3-foot metal pattern plate at 20 yards; one shot missed the plate entirely. The instructor told me to slow down just enough to be sure I hit the center of the plate without aiming. I hit the center every time, and the difference in mount speed from my fast, erratic shots to the more deliberate ones was 0.256 second. A bird can fly only about 5 yards in that time. Work on your mount at home (we’ve discussed this) until it’s consistent, and don’t fret about speed. Pellets moving 900 mph catch up to a 40 mph bird ­every time.

Read Next: The 10 Best Upland Shotguns Ever Made

Exactly how fast is too fast or too slow? I can’t tell you. Or at least, I can’t be precise because it’s different for everyone. Too fast is the point at which proper gun mounting breaks down. Too slow is when you start thinking and looking back at the barrel. Find the sweet spot in between, and you’ll shoot your best.

Recently, I used Gar­min’s new Xero S1 Trapshooting Trainer to check my own timing. Combining a camera with radar, the S1 tells you how long it took you to shoot, how far away the target was when you shot, and exactly where your shot went.

The S1’s upland mode lets you set it up 5 feet behind and to one side of an electric trap replicating a common upland going-away shot. Using a trap that throws a 40 to 45 mph target, my shooting was a mess when I tried mounting and firing as fast as I could, which took between 0.5 and 0.6 second from a low-gun start. My breaks came at 14 yards, but even on the hits, my point of impact shifted, and I missed over the tops of two birds by a foot and a half because my head wasn’t fully on the stock.

When I slowed way down, into the 1-second range, I shot better but still had misses. Then I found my sweet spot—between 0.7 and 0.8 second—and I couldn’t miss. Every bird broke at 19 yards, and virtually every shot was centered within a few inches of the clay. Taking just an extra 0.2 or so of a second put me in perfect rhythm. They say slow is smooth and smooth is fast. But that’s not exactly the case. Smooth isn’t as fast as fast, but it’s more accurate and more than fast enough.

And now, because this is my column, I get to contradict myself: If a lot of your hunting features birds flushing at 20 or 25 yards, not at your feet, you might have to speed up—a little. There’s a simple way to do this, but it’s completely counterintuitive: Shoot a heavier gun. A few years ago, I timed five shooters on straightaway targets from a low-gun start. We used a 6¾-pound 20-gauge Remington 870, a 7¾-pound 12-gauge 870, and that same 12-gauge with 15 ounces added to the butt and magazine cap. The average times per hit, from lightest gun to heaviest, were 0.98 second, 0.91 second, and 0.77 second. I also recorded hit percentages, which, in the same order, were 63 percent, 71 percent, and 72 percent. In other words, the heavier the gun, the faster and more accurate it turned out to be. S0, save your ultralight gun for the grouse woods, and pack something heftier for late-­season, open-country hunts.

You can also learn to get a little faster. The Garmin Xero, or a buddy with a stopwatch, can help. Use either to track your progress, and be sure you’re still on target as you work on making a faster yet still deliberate move to the bird.

For everyone else, finding your perfect timing can be as simple as just getting on the range and shooting at targets fast, slow, and in between while watching your hits and misses. It’s not about hitting a precise number, like 0.7 or 0.8; it’s about finding a rhythm that feels right and puts more pellets on the mark. Then bring that to the field.