How to Use Your Binoculars and Spotting Scope to Hunt Elk, Mule Deer, and Antelope in the West

If you want to be a successful Western hunter, you need to know your optics. A New Mexico big-game guide shares his best glassing and optics tips 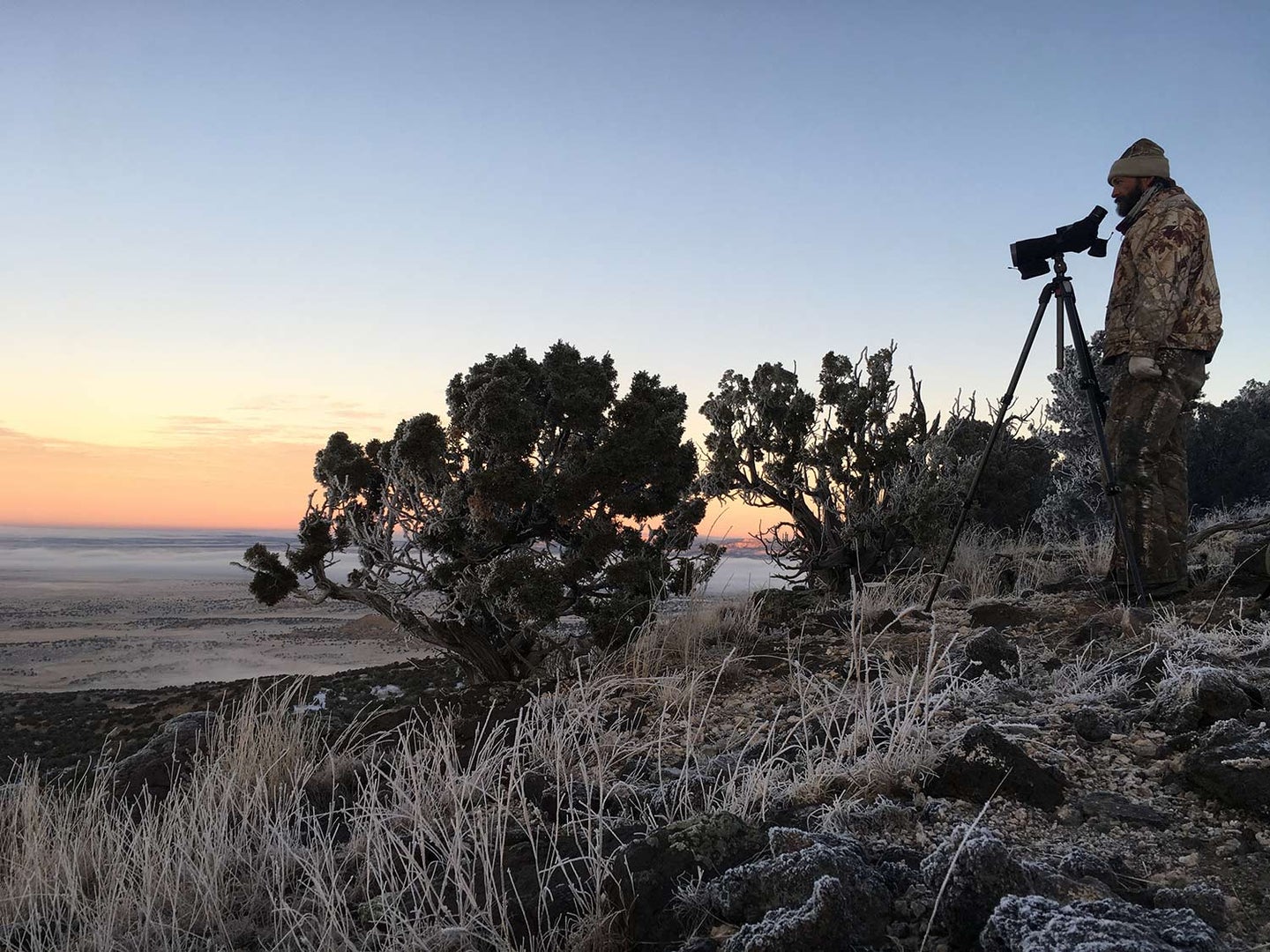 I had met Buzz the night before, when it was dark and the rental car was hung up in the snow. He was like a lot of good Western hunting guides I’ve known—not especially friendly at first, but capable. He had snow chains, and we got the car unstuck.

The next day, we set up on a massive rock slab to glass across a meadow and into a thick hillside, a mile away—perfect New Mexico elk country. I settled in and pulled my binocular to my eyes, scanning the hillside, looking over a few coulees, and gazing out across the meadow. Nothing. I lowered my glass and glanced at Buzz, who had a pair of 15x binos on a tripod and seemed to be willing an elk to appear from the dirt. I took another look, across the same country, and still saw nothing. I glanced at Buzz again, and he remained motionless. It seemed we’re going to be here a while.

It was a December hunt, and the bulls were in bachelor groups and acting lazy. Our best hope of killing one was to spot him from afar, size him up, and make a stalk in the classic Western fashion. There were plenty of elk to see. Problem was, most of them were bedded on nearby BLM ground, and we needed them to amble across a property boundary to where my private-land-only elk permit was valid. We glassed morning and evening in conditions ranging from bright sun to driving rain and snow to lingering fog. We used our optics not only to spot and judge animals, but to predict what they were going to do and plan stalking routes.

It took about a day for me to realize Buzz was better than most I’ve hunted with at using his optics. (His Instagram handle is @glassin.buzzard). By the end of the week, I was aggravating the hell out of him with questions, and I’m glad that I did, because he was forthcoming with answers. Fact is, it’s hard to perfect your glassing technique if you live back East, like I do, and so you’d better take notes when you can.

Monty Keith Brown II got the nickname “Buzz” from his two-year-old sister shortly after he was born. She had trouble saying “brother” and began calling him “buzzer.” Buzz it became. He grew up in Arizona, and has spent a lifetime hunting western critters in desert country. His grandfather turned him loose with a BB gun when he was just three years old. “Mom wasn’t happy about it,” he says, “but me and my cousin Joey would wander around in the desert behind the house, hunting whatever we could.”

These days, he guides for Black Mountain Outfitters in both Arizona and New Mexico for antelope, elk, and mule deer. “Everything we do is glass, spot, and stalk,” he says. “Hunting in the desert, that’s just the way it goes. You get up on a hill, glass, find them, and make your way over to where they’re at.”

During his day-to-day, Buzz depends on three different optics, each with a specific task. Here’s the rundown.

Here is the glassing gear that Buzz relies on for spotting, and stalking big game in the Southwest.

Most of Buzz’s glassing hours are spent behind a Vortex 15X HD binocular mounted to a tripod. The setup strikes just the right blend of maneuverability and magnification. “When you’re on a hill and looking for things, not trying to size them up but just find them, a 15x pair of HDs are best,” he says. “They’re too heavy to hold steady offhand, but easy to use on a tripod.”

We saw elk at all hours of the day, but finding them was toughest in the heat of the afternoon. That’s when most of them were bedded in dark shadows, tight to pinyon and juniper trunks. “When things are up moving around in the open, I like binoculars,” Buzz says, “but I’ll switch to a spotting scope if I’m looking for stuff bedding under trees at a distance. I’ll use a spotter if I’m trying to size something up that I’ve found with binos, too.”

“The most important piece of equipment you can have when you’re looking a long way is a good tripod,” Buzz says. “You can slap a $400 spotting scope on a good tripod, and see more than you can with a $2,800 scope on a cheap tripod.” Buzz carries a carbon-fiber Manfrotto. “It’s heavier, but it’s just a vital piece of equipment. Everything on it, if it moves, is adjustable. I have an Outdoorsmans Pan Head on mine, with all metal components. In the dust we have out here, anything with plastic components wears out fast.”

Once he commits to a stalk, Buzz leaves behind the heavy stuff in favor of a 10x bino worn on a chest harness—standard equipment for hunters everywhere. “When you’re trying to find them again on the ground, you want 10s around your neck,” he says. “I use an Alps harness, which has a rigid case on your chest. You just drop your binos in, and don’t have to fight with it. And it’s quiet.”

The usual lens cloth and cleaning solutions are important to bring along, but for maintaining glass in desert conditions, Buzz always carries a can of compressed air, too. “Air compressors back at the lodge are good for really cleaning things, but bring a can with you for blowing dust off the glass,” he says. “It’s just a good thing to have out here. Backpack zippers and everything else get clogged with dust.”

How to Use Your Optics on a Big-Game Hunt

Lacking a 15x bino of my own during my hunt with, I was pulling double-duty with a 10×50 and a Leupold Santiam 27-55x80mm spotting scope. Like just about everyone else who comes to New Mexico from back East, I started out glassing too fast.

“Everyone sets up, looks a while, and says, ‘Well, I don’t see anything,’” Buzz tells me. “First thing I do is make a quick look everywhere to make sure there’s nothing obvious and visible. But then I go back, and pick it apart frame-by-frame. I leave them on the same spot for 30 seconds at a time, without moving. If you’re sitting still in your glass and you see an ear flick, something’s there. If you’re moving around, you never see that flick. Movement is what I catch first, most of the time. Even when a deer or elk is bedded under trees and you’re trying to dig them out of the shadows, they generally don’t sit still for long. You’ll see something there that’s suddenly different. They’ve moved their head, shifted their body. But you can’t catch that by panning across the landscape.”

Wide-open country has a deceptive amount of folds, creases, and shadows that are more than big enough to hide a bull—something I quickly learned when we took off on a stalk—and reason enough to check the same frames repeatedly. Once you commit to a stalk, you need to keep reference on where you’re going because of those folds, too. Optics also help with that.

“A lot of the times, when we find animals, they’re miles out,” Buzz says. “Everything looks different when you start moving. What I’ve taken to doing nowadays is using a phone scope. When I spot an animal, I take a pic, and see what’s around him from the top of the hill. Then I can reference trees and things once we’re on the stalk. Most of the time I like to wait until they bed down before I move, unless I know they’re going to an obvious location.”

As it set in that we’d be sitting in a glassing spot for hours at a time each day, I began to slow down. Buzz’s glassing sessions were so long that he’d often build a fire, brew some coffee, and have a smoke while he glassed.

On the final evening, we were on a mesa above the same hillside that we’d been glassing all week, this time looking down into the pinyon and juniper. I was glued to a deep shadow when I saw something move—an ear. I referenced it, aligned the spotting scope, and slowly zoomed and adjusted my focus. Three good bulls were bedded tight in the shade, and I’d just “dug them out” as Buzz would say. When they stood to make their move toward the evening feed, it looked as though they were headed right toward the boundary where we could hunt them.

Buzz and I clambered off the hillside and made a wide circle around, ending up in a small meadow just at the edge of the property line. I was sure the bulls were about to ease into view, and we were going to end this hunt like heroes. But they didn’t. They acted like elk.

For as big as these critters are, elk have an uncanny ability for vanishing into the folds of country like this. The best desert hunters know that. That’s why they’ll build a fire, have a smoke, and settle in to look for them.