Hunting Antelope with a Lever-Action .357 Is So Much Fun, It’ll Make You Feel Like a Kid Again

Leave the 6.5 CM at home, and go chase Colorado pronghorn with an old-school truck gun 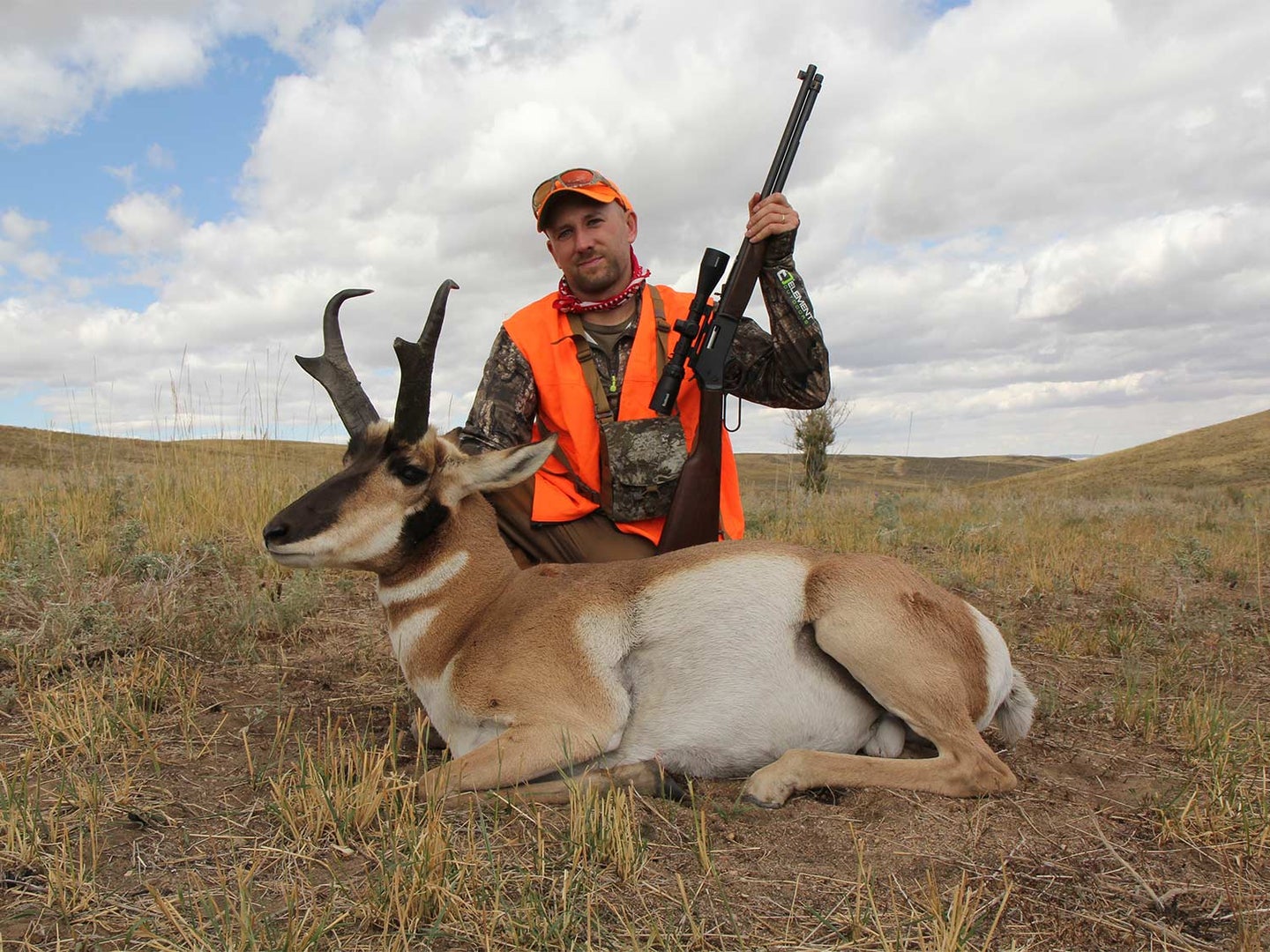 The author with his pronghorn buck and Henry Big Boy .357 Magnum rifle. Will Brantley
SHARE

I love the antelope rut. Sneaking up on a pronghorn buck that’s trying to keep his harem in order is fun in the way that fifth-grade dodgeball was fun. My buddies and I sat quietly in class, operating on the promise that for 30 glorious minutes in P.E., we’d get the chance to storm the half-court line in the gym and inflict mild, but deliberate, violence upon one another with a fusillade of rubber balls. It was intense fun, and you were the likeliest to get pegged and sidelined by rushing in close—but it was worth every risk, because all the glory was had by rushing in close, and the sidelining never lasted long.

And when it comes hunting antelope, stepping out of the truck to snipe a pronghorn from 500 yards, while avoiding crawling around in the dirt and the cactus, is like winning a round of dodgeball by merely standing in the corner until everyone else is out, having never taken a throw or ducked at one either. Technically, you’ve played the game successfully, but you’ve also missed the point. The fun of it is crawling up close as you can.

So I was looking forward to a road trip to Colorado in late September to hunt with my buddy Miles Fedinec. We had a pair of private-land-only tags, meaning we were limited on where we could hunt, but we could go during the best days of the antelope rut—with guns. Agonizing over a rifle is the part of hunt planning we all enjoy most, but there was no agony for me here. I wanted the anti-antelope rifle, in a sense, because I wanted to force myself to get close. This meant:

I decided to hunt with my truck gun: a lever-action .357 Magnum that’s topped with a $90 Bushnell scope. It’s been a good rig for ground hogs, skunks, and the like. I’ve killed deer with it, too. A go-to truck gun is as important of a tool as a man can own, far as I’m concerned—right there with good socks and a broke-in cap.

And say what you want about the .357 Magnum; I’ve hunted with it a lot, and even at 4-inch revolver velocities, it puts down 50-yard whitetails just fine. From a carbine barrel, it’s as though the caliber sprouts the wings of a harpy eagle. I sighted my gun in with Federal’s new Hammer Down load, which is available in all the classic lever-gun calibers, including .30-30. The .357 shoots a bonded 170-grain soft point (though the nose is still a bit concave, in hollow-point fashion). I chronographed it at 1767 fps. at the muzzle from my rifle, and shot groups of just under 2 inches at 100 yards. Getting within 100 yards of a pronghorn—hopefully closer—was exactly what I planned to do.

Getting Close to a Pronghorn Buck

Miles and I met at the cattle guard the first morning, and he explained the general layout of the ranch we were hunting. He had a pronghorn tag of his own to fill, and so we planned to split up and hunt two separate sides of the place. “There are several herds of antelope here, and they cross back and forth from the BLM all the time, too,” he said. “They’re rutting bastards right now, so have fun.”

He was right. Almost immediately, I drove right up in among a herd. There was a good buck with maybe a dozen does, and he turned the does like a school of shad, away from the truck. I made a note to perhaps return and give them another look—but I wanted to see more country and do some walking first.

I came to a draw with a cross fence that Miles had mentioned turned off near an old homesite with a water tank. It was full of antelope early in the season, he’d said, but that morning was cold, and I didn’t expect to encounter many thirsty goats. Still, it was good country and worth a look. Stopping at the cross fence, I could see a couple groups of pronghorn in the distance. I glassed them for a bit with my binocular and could make out the horns of one pretty good buck tending a group of does. I decided he needed another look through my spotting scope. I just brought him into focus as he disappeared over the crest of the hill, toward the homesite.

I briefly considered loading up and looking over the rest of the ranch. But instead, three minutes later, I was sneaking down a drainage paralleling the cross fence with plans on whittling a thousand yards down to a hundred. I’d like to say that I just wanted a better look at the antelope but truth be told, I knew full and well I would shoot that buck given the first reasonable chance. That is just the way I am.

As I neared the spine of the ridge where I’d seen the herd, I noticed the plowed line of a fire break that made for a perfect stalking path. It was as though it had been put there just for me, because sneaking down it I nearly walked right into the herd. Evidently, they’d worked my way nearly as fast as I had come toward them, and fortunately I spotted the backs of a few does, heads down and feeding, before they spotted me. I dropped to my belly and crawled forward, where I could see the rest of them. The buck was pacing the edges of the harem, keeping the does in some order that seemed to make sense to him, as a sheep dog would a band of ewes.

One of the does got the buck killed. I was only 75 yards from them, but always with too much brush or too many does in the way for a clear shot. But I knew my chance would come. Antelope rely on their eyes more than their noses but they can damn sure smell you, too. I had a steady breeze in my face, and good cover, between the fire break and sage. I just needed to be patient.

The offending doe peeled away as the buck was occupied on the other side of the harem, and she began to flank me for no reason that I could discern. She fed along casually at first before noticing me, then stood at red alert, 91 yards away, in the wide open. I shifted the rifle and myself, finding a perfect prone rest across the plow mark of the fire break.

As I knew he would, the buck came trotting up the same path to get the alert doe back in line. She bolted as he stopped in the same spot and looked me over. I already had the crosshair on the center of his shoulder. The crack of the .357 was subdued on the open prairie, but it didn’t need to be loud to work. The buck crumpled where he stood, the bullet having cleanly punched through both shoulders. I didn’t need another shot, but the click-click of the lever was nonetheless satisfying. I lowered the hammer carefully.

Miles met me an hour later, and said he wasn’t at all surprised that I’d stopped and killed the very first buck I saw. “It was the second or third one,” I said, “and a good one besides that.”

Aside from a chipped prong from fighting, there was no denying he was a big goat. I quartered him and put him in the cooler, and then spent the rest of the day riding around with Miles to glass more antelope. We made several good stalks and passed a few bucks.

Nearing late evening, we got on the best buck of the day, holed up with his does in a fortress of wide-open nothing, as antelope often do. He couldn’t relax, as a pair of young bucks kept pushing the boundaries, as if they truly expected one of the does to leave the group and go with them. The big buck, infuriated, made repeated thousand-yard charges at them, running out of sight before loping back a few minutes. Hell, I got tired just watching him through my binoculars.

All the while, though, I could see Miles’ orange hat, too, first as he slipped across a dry creek bed, and then as he crawled for an hour through the brush and cactus. It was all happening on one ridge, as I glassed from the spine of another. When Miles was finally within range of the does, he set up to shoot. Seconds later, the buck was trotting back into view, for his last time. One more shot, and both our tags were filled.

Like a good game of dodgeball, a late September antelope hunt usually doesn’t last long. But sometimes, even for a little while, it’s good to feel like a fifth-grader again.