They’re hard to hunt and tough to kill, but a few last-minute roosters are still out there for the taking 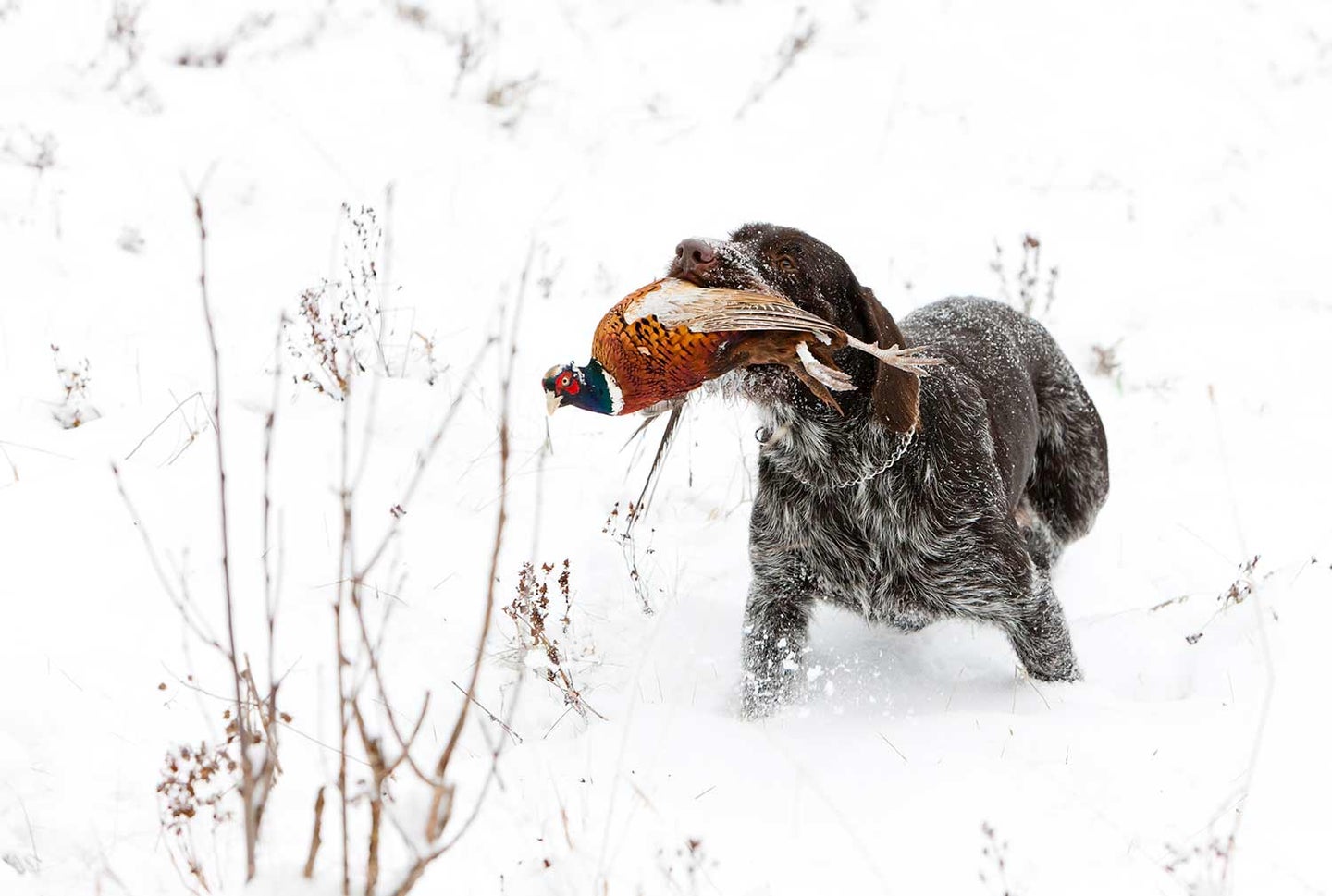 Retrieving a late-season rooster from the snow. phb.cz via Deposit Photos
SHARE

A late-season pheasant is an entirely different bird than those found early on or even in the middle of the season. Hunting them is similar to trying to tag a wary old whitetail buck. They’re paranoid, jumpy, and just plain difficult to get close to.

Depending on which state you live in, pheasant season may run until the end of January. Not only do you need a good dose of luck to connect with birds that have been continually harassed for nearly three months, but you also need to hunt much smarter than you did on opening day. Here are a few ways to outsmart one of the smartest game birds on the planet—the late-season rooster pheasant.

While late-morning hunts can be good in the middle of the season, you should get up early during the late season. Wary birds often like to fly out and feed before shooting time and right at first light. You’ll want to be in the field before daybreak to catch any stragglers. Just make sure that when you shoot, there’s enough light to differentiate between hens and roosters.

Likewise, afternoon hunts can be productive in the late season. Hit the field a few hours before sunset, after pheasants have had time to feed and return to their loafing/roosting areas. Just be sure to quit well before the sun goes down to give birds time to settle for the evening.

A fresh skiff of snow may be all it takes to get late-season roosters to hunker down and hold for the dog. The snow doesn’t need to be too deep, either, just enough for pheasants to burrow into, but not enough to make walking overly difficult for them. Best of all, you can track pheasants in fresh snow, because it’s much quieter than refrozen, crunchy snow.

Read Next: The Science Behind Hot Streaks and Slumps in the Pheasant Field

When hunting pheasants during the late season, keep a close eye on the cover. Try lying down in a CRP field on a cold winter day. You’ll immediately notice how much warmer it feels at ground level out of the wind. Whether there’s a bunch of snow on the ground, or bitter low temperatures, or both, pheasants prefer tall, thick cover to protect themselves from the elements. Also, pay attention to areas in a field that have slight depressions or pockets that are noticeably warmer than the surrounding area. Pheasants love these spots, especially early in the morning or late in the day.

Waterfowl Production Areas (WPAs) and wetland habitats are great places to find late-season pheasants. The uplands surrounding wetlands often have good stands of grass, while cattails on the edges of the water provide cover all season long. What’s more, parts of the area that were previously inaccessible due to high water during the early season should now be frozen and easier to walk on. Lastly, during the winter, there are fewer hunters in these areas, making it easier to hunt on weekends, whenever the weather allows it.

Regulations on WPAs may require you to use non-toxic shot. Waterfowl loads will work for pheasants, but consider using a premium non-toxic load such as Winchester’s Blind Side Pheasant, Federal’s Prairie Storm steel, or Hevi-Shot’s Hevi-Metal Pheasant. All are designed specifically for knocking roosters down. Earlier this season, I shot a young rooster with Hevi-Hammer, a devastating new duplex load from Hevi-Shot that contains both steel and bismuth.

Read Next: What’s Better than Popeyes AND Chick-fil-a? A Fried Pheasant Sandwich

Late-season roosters are big, heavily-feathered birds, and while smaller-gauge shotguns may be sufficient early on, you’re better off hunting with a 12-gauge now. However, that 12-gauge should be lightweight, because you’ll be carrying it way more than you’ll be shooting it.

My favorite lightweight late-season scatterguns typically weigh around or under 7 pounds. The new Browning A5 and Winchester SX4 are both great options, along with the Franchi Affinity and the Remington Wingmaster.

Bigger roosters also require heavier payloads. For a 12-gauge, that means at least 1 ¼ ounces in 2-¾-inch shells and 1 ⅜ ounces (or even 1 ½ ounces) in 3-inch shells. If you absolutely must use a 20-gauge, consider upsizing to 3-inch shells with 1 ¼ ounces of shot. Also consider using copper or nickel-plated shot instead of just lead to better penetrate all those feathers.

While you don’t want to over-choke when hunting pheasants during the middle of the season, now is the time to tighten up your patterns. This isn’t to say you can’t shoot pheasants in January with more open chokes (especially while quail hunting). If you’re hunting over a pointing dog, you may be able to get by with a Modified or even Light Modified tube, depending on how staunch the dog is. But as a general rule, if pheasants are the main course on the menu, tighten chokes up by one or two constrictions in the late season. A full choke works well, especially if hunting with a flusher, and most aftermarket chokes labeled as “late season” are actually Improved Modified tubes.

Read Next: When Is the Best Time to Hunt Pheasants?

7. Be Prepared for Quail

Speaking of quail, bobwhites and pheasants often inhabit the same areas. If you’re choked tight and loaded for roosters, that’s fine. Shoot what’s in your gun at the covey rise, but bring a few spreader loads along for going after the singles.

Spreader loads use a specialized wad that causes the shot to quickly disperse after leaving the muzzle. The result is a wide-open pattern at close range, and they will open up patterns a couple constriction sizes without requiring a choke swap.

My go-to spreader load is Poly-Wad’s Spred-R, but Kent also offers a neat new spreader load in its Elite Pro Target line. I usually carry three or four in my vest pocket throughout the season in case quail show up.

8. Listen to Your Dog

A couple of seasons ago, bobwhite numbers were high in my area, and we’d enjoyed a record quail season. However, pheasants were a little harder to come by. All that changed one mid-January morning when my dog, Phantom suddenly went on point. She’d pinned down a small group of pheasants, and as I approached, two hens rose on either side of a rooster. I aimed for the middle bird and hit him, despite having a cylinder choke in my gun.

I directed Phantom to the where the rooster fell, and she ran around in circles before trying to run back the way we’d come. I reined her in and made her re-search the area, but she tried backtracking again. This time I let her go.

As I followed her out of the grass and across a cut cornfield, I spotted bloody pheasant tracks in the snow. I followed the tracks across the cornfield and called again for her. This time Phantom came bounding back with a very much still alive rooster in her mouth, but with no tailfeathers. The two lessons I learned that day were simple: Always trust your dog, and don’t give up on a bird, especially in the late season.