What I Learned from 22 Straight Days of Turkey Hunting

How to hunt public land smarter, why the 20-gauge is the superior turkey gun, and other lessons from the 2020 season 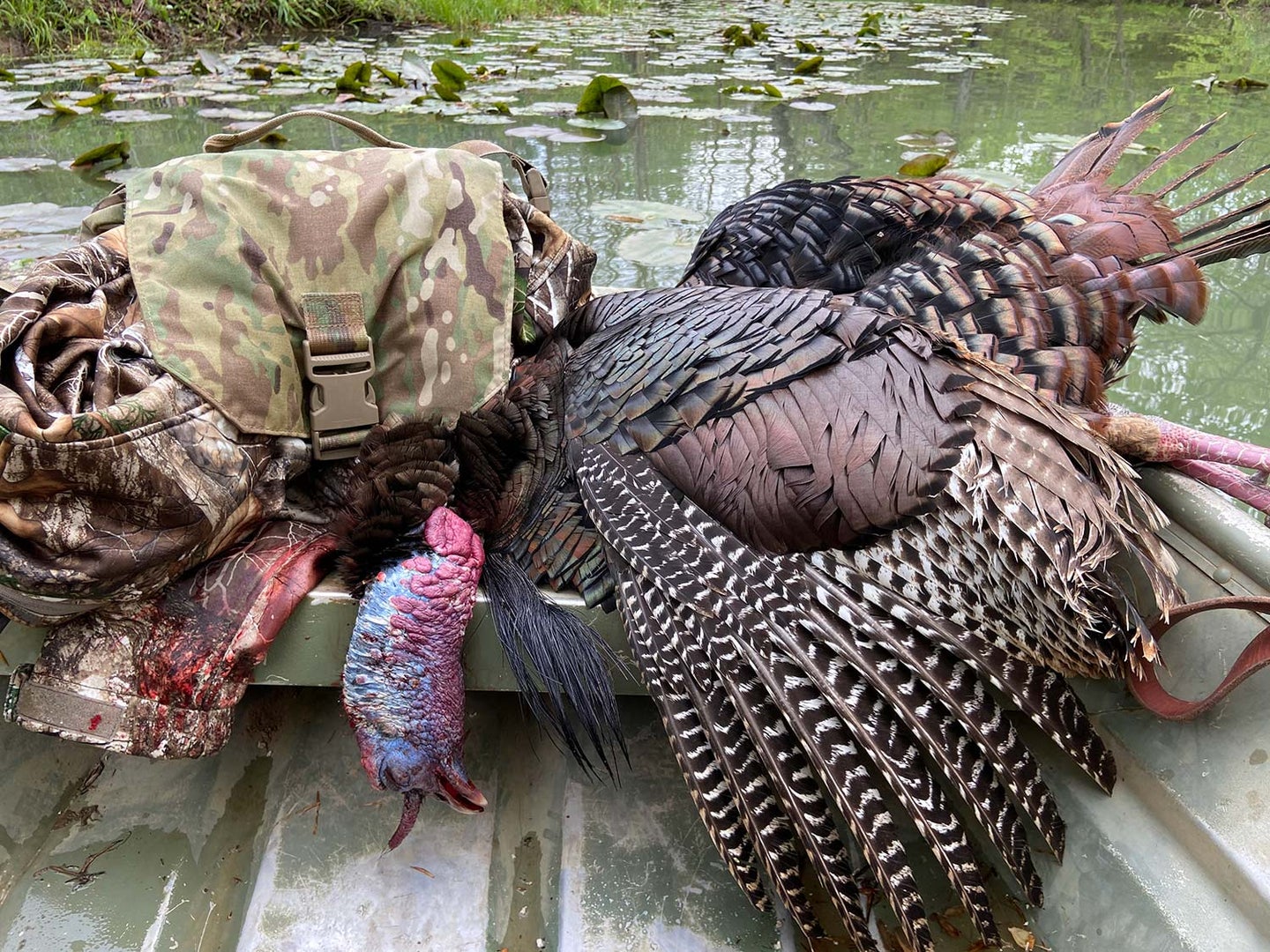 The 2020 turkey season ended for me a couple weeks ago. In a typical season, I’ll start hunting in March and will have filled tags in five-plus states by the end of May. This season, COVID-19 concerns and restrictions cancelled most of that, save for a few sneak-across-the-border hunts in Tennessee (I live in southern Kentucky, 10 minutes from the state line). Knowing that I’d be stuck at home, I wanted to make the most of the season, and so I hunted 22 days straight—rain or shine. When I was hunting alone, I did so almost exclusively on public land. When I hunted private land (we have access to three farms, none of which are bigger than 150 acres), my wife and 5-year-old son were usually with me.

By the end of it, I managed to fill four tags—two in Kentucky and two in Tennessee—and Michelle filled one of her two Kentucky tags. We had more than a few close calls, too. Here’s what we learned along the way.

The birds are gone. That’s been the story of Southeastern turkey seasons the past few springs. There is no doubt we have fewer gobblers to work with now than we did a decade ago. But they’re not all gone. I firmly believe we hunters are conditioning birds not to gobble as often—especially on public land. Ten years ago, running and gunning worked very well. It’s how I learned to turkey hunt.

Last season, I struck one turkey while walking and calling. I killed him within 10 minutes, and those 10 minutes were a frenzy. I know now to cherish experiences like that, because they’re rare. This season, despite hunting nearly every available day, I didn’t cold-strike a single tom. I’m not saying traditional running-and-gunning can’t still work—but I do think, these days, you spook more turkeys than you kill doing it.

That doesn’t mean I can stand to just sit in a blind all day; that tactic is my absolute last resort. Instead, my new run-and-gun approach is to sneak—still-hunting-deer-with-a-bow slow—through good country, and make multiple blind-calling sets. Some last a half hour, and some last several hours. It’s not unlike a strategy for hunting predators—and it works.

Of the five tags Michelle and I filled, every bird was called to the gun. Four of them responded silently, including all three of my public birds—one in Kentucky, two in Tennessee. We’d heard gobbling on the limb in most cases, which helped us zero in. After that, we chose good setups, hid well, sounded like live turkeys…and stayed very patient.

2. Late Season Is a Great Time to Turkey Hunt

I used to complain that our season in Kentucky—which always opens the Saturday nearest the 15th—came in too late. Tennessee opens two weeks ahead of us on average. This year, I had buddies in Minnesota hunting before I did. But I’ve also heard many experts say that the late season, biologically speaking, is the better time to call up a longbeard, because the real hens are mostly all on the nest by then. Admittedly, I haven’t hunted the late season around here much because my tags are usually filled and I’m in Nebraska by early May.

This season, I heard one turkey gobble on the limb during the first eight days of season. One evening after another long, silent day in the woods, I was sulking back in to camp, tired, pissed off, and ready for a whiskey drink. As if to console me, a turkey suddenly gobbled from just across the creek from the cabin. I set up on him the next morning, and had my best classic hunt of the season. He must’ve gobbled half a thousand times before he finally strutted into view at 20 yards. He was all alone.

The turkey I killed two days later in Tennessee was all alone, too, as was the longbeard I shot on May 9, the second-to-last day of Kentucky’s turkey season. It’s the latest I’ve ever killed a turkey around here. That bird gobbled well on the limb, and then tried to sneak in silently later in the day. His drumming gave him away, just before I saw his fan unfurl, already within gun range.

3. Brush and Cockiness Are a Bad Combination

When I look back on turkeys that I’ve shot at and not gotten, it’s not the long pokes that stand out because I rarely take a shot beyond 40 yards. It’s when I think, I can hit his head through that opening that things go haywire. This year, after a slow start, I was coming off a high from filling two tags in three days—and it looked like I was about to fill another one. I’d been watching a gobbler strut with three hens in one of my food plots, just 70 yards away. I was in no hurry. I’d call, and he’d just strut harder. Finally, the hens started to drag him away. So I crawled into the field, holding up a dried turkey fan. He didn’t like that, and came waltzing right in, but hung up behind a short autumn olive bush, 25 yards away.

Had I any sense, I would’ve gotten into a good position and waited for him to get nervous, drop strut and putt away—I almost certainly would’ve gotten a clear shot at his head. Instead, I wiggled around until I could get my gun to my shoulder, and tried to force a shot through that bush. I didn’t notice the dogwood sapling just 10 steps from my barrel when I pulled the trigger. I killed that with most of my pattern, and the autumn olive with the rest of it. I can’t be positive I didn’t touch the turkey but I am very sure I didn’t kill him. I spent four hours combing the nearby woods and brush piles just in case. I needed that time to reflect on what a dumbass I’m still capable of being in the turkey woods.

4. Turkeys Will Gobble in the Rain

Most years, I hit snooze if I wake up to rain. This year, since I only had so many mornings to hunt, I went rain or shine. I heard as many turkeys gobble on the cloudy, rainy days as I did on the classic clear, high-pressure bluebird days. Extreme winds and deluge rains associated with severe cold fronts stifle turkey activity. Aside from that, I’ve come to realize that turkeys gobble when they gobble, and if you aren’t out there, you won’t hear them.

5. Eat Those Turkey Legs and Thighs

I know a lot of serious turkey hunters who don’t save the legs and thighs of their birds—and for a long time, I was one of them. I’d cooked them some, but the finished product was never good. But still, chunking them to the ditch is a lot of waste, and not the example I wanted to set for my son. I resolved myself to save and cook the legs and thighs of every bird we shot this year. I’ve researched recipes, and have been cooking them lower and slower than ever before. Lots of seasonings. Lots of broth. Lots of time in the Crock-Pot.

I am not the type to get teary-eyed over a wild-game dinner. We eat so much of it that I’d be crying most nights, and I’m not teaching the boy that crap either. The fact is fried turkey breast is superior to every turkey leg recipe that I’ve yet tried. So is, for that matter, gas-station chicken. But when pulled and used for tacos, soups, casseroles, and the like, turkey legs are edible. Going forward, I declare throwing them away to be unacceptable.

Western hunters get romantic about public land. In the Southeast, it’s hard to get the fuzzies over a predawn cussing and potential fistfight. We have far more hunters on far fewer acres. You can plan on running into people virtually every day you’re in the woods. Public turkeys get spooked and harassed endlessly, and that makes the whole experience difficult and, often, frustrating.

But that doesn’t mean the hunting can’t be good. While I’ve always hunted a lot on public ground, I made a point of dedicating most of this season to it. I don’t think public turkeys gobble as much as a rule—but they do go through the spring rituals, and that makes them killable. This year’s slow start was actually a blessing in disguise for public-land hunting. By the time the hunting got good, most of the competition—at least in the spots I hunted—had given up.

7. TSS Has Truly Changed the Game

Ten years ago, if someone told me they carried a 20-gauge because it was lighter and kicked less, I told them to man up. Shots at turkeys were too precious to chance to a pop gun.

But this year, for the second season in a row, I left my 12-gauge in the safe in favor of my Benelli M2 20-gauge, which weighs less than 6 pounds. I wouldn’t trust it on longbeards except that I put a Carlson’s TSS turkey tube in it, and with either Federal No. 9 Heavyweight TSS or Browning 9×7 TSS Tungsten Turkey, it throws a screen-door pattern at 40 yards. When I do my part (like, not shooting trees), it stones gobblers in a way that 12-gauge lead just does not. I can’t describe it other than to say, they don’t flop much anymore. That lightweight gun is certainly easier to pack, crawl with, and maneuver. It is the superior tool.

We spend so much time wringing our hands over getting new hunters into the sport and making sure our kids are introduced to it correctly that it’s easy to overlook the most important part of it: You just have to bring them with you—even if that means sacrificing some of your own success.

The entire Brantley family goes stir crazy, sitting in a blind. And when Michelle and I take Anse turkey hunting, we proceed as we always would. Sometimes Anse asks me to carry him, and sometimes I do. Usually, I tell him to be tough and keep walking. When we set up, he’s told to sit still and be quiet, and sometimes we have to be stern to achieve that. But he also gets to help set decoys, call, and ask any question that he wants to ask. When he’s ready to leave, I sneak him home, and Michelle keeps hunting. But while we’re out there, he’s to take it seriously. He’s learned that turkey hunting doesn’t have the near-guaranteed success of bluegill fishing or squirrel hunting.

But one morning, when he was sitting between my knees against a tree, he sat perfectly still as a band of jakes charged in to 15 yards and started slapping our decoy around. “Shoot that fat one, Mama!” he whispered. And Mama did. We fried that turkey for lunch—but we had to hunt till 10:30 first, at the insistence of a 5-year-old. Maybe he’ll grow up to be a turkey hunter. Maybe he won’t. Mine and Michelle’s job, as we see it, is to teach him how it is and let him decide.