When Is the Best Time to Hunt Pheasants?

Why you should hunt pheasants in the midseason—plus, seven tactics for success in the field 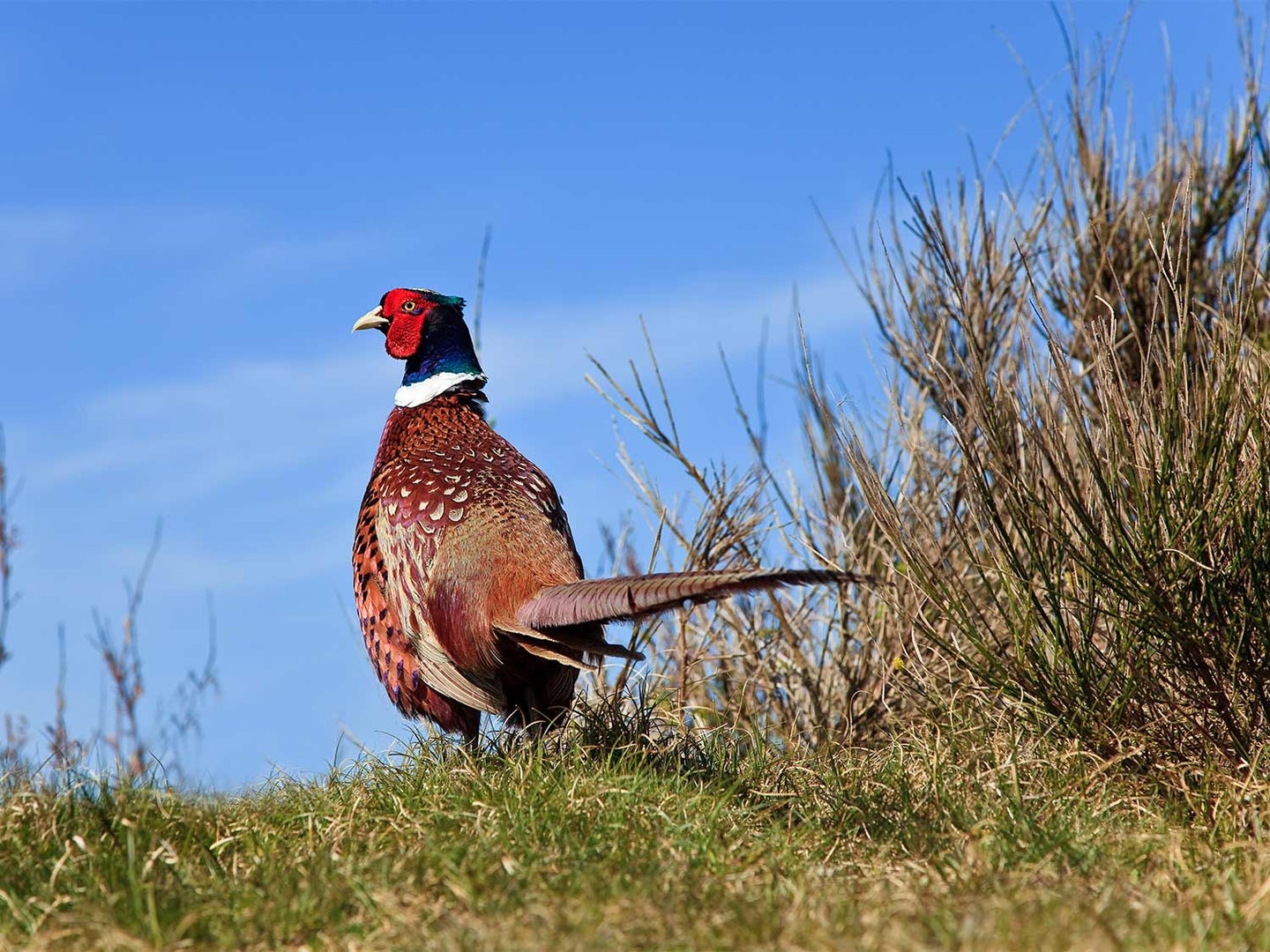 Pheasants are still around after opening day, you just have to know where to look. pwollinga via Deposit Photos
SHARE

Every pheasant hunter wants to be out chasing roosters on opening day. True, you may stumble upon some young-of-the-year birds that hold tight, flush close, and provide a quick opening day limit, but don’t count on it. Don’t put your shotgun away yet either, because the best hunting is still to come. Once summer flocks fully disperse and roosters spread out, pheasant encounters become more likely. Persistence will put more birds in the bag than opening day luck. Here are a few reasons to embrace the midseason, and a few ways to increase your midseason success.

The Corn Is Picked

The number-one reason to get back in the field a few weeks after the opener is that more crops will be harvested, forcing birds to relocate into more huntable cover. I face this dilemma nearly every year: I’m raring to go on opening day, but nearby cornfields aren’t picked yet. The dog and I end up spending the entire day walking back and forth across empty CRP fields searching for birds that aren’t there yet. It’s frustrating, but things will quickly improve once the corn is gone and pheasants have moved into their winter cover.

The Birds Settle Down

Another benefit of midseason hunting is that the birds will have settled down. After the initial opening-weekend onslaught has subsided, most birds return to their normal daily routines of feeding and loafing. Even the cagiest old rooster relaxes a bit by midseason. Now is the time to go after those early-season survivors. While a midseason hunt may mean less available roosters, it can also be more rewarding if those remaining roosters play nice.

The crowds will have significantly thinned a week or two after the opener, leaving the birds to the persistent few. While there may be a slight uptick in hunting pressure over the extended Thanksgiving weekend, the time between Thanksgiving and Christmas can be especially productive. Those who hunt in mid-December between the holidays will often have the pheasant fields all to themselves. That’s the time to go.

The Weather Is Still Nice

While there may be some snow on the ground in late November and early December, by hunting the midseason you’ll avoid that really nasty late-season weather. January blizzards with lots of snow often move across prime pheasant states, frequently followed by bitter-cold temperatures. The issue isn’t just comfort, but also access. Too much snow can keep you out of the field. This happened to me a couple seasons ago just as the dog and I were hitting our late-season stride. Over a foot of snow fell and deep drifts prevented us from reaching several of our key spots, some of which we never returned to that season. Get your hunting in now during the midseason before deep snow shuts the party down.

If possible, hit public land mid-week. Even in the midseason, public areas will see more traffic on the weekends than during the week. This is also true of private land. Even though you have permission to hunt a property, there will be less competition on weekdays from other relatives or friends who may hunt there as well. Take a day, a morning, or an afternoon off work to squeeze in a mid-week hunt. Whether on public or private land, you’ll almost always have the field to yourself.

I hate getting up early, and when chasing midseason roosters there’s no reason to. Go mid-morning, after the birds have had time to feed and return to their loafing cover. I’ve had great success walking the surrounding uplands after an early morning duck hunt. Swap waders for boots and do some rooster chasing before you go home for lunch.

Afternoons are good, too. By afternoon, the air temperature will have warmed up, and the birds will have had time to feed and move around more, leaving more scent for your dog to follow. Sleep in, get some work or chores done, have lunch, and then go after those relaxed afternoon roosters as they loaf around in the grassy edges near feeding areas, such as picked corn or sorghum. Don’t be surprised if your dog goes on a long track, but pay close attention when her tail starts wagging faster than usual or it suddenly stops and she slams on point. Get ready, because the flush is imminent.

To make midseason shots, tighten up your chokes, but only slightly. Where you might have used a skeet or IC choke on opening day, tighten up to a light modified or modified to gain a little distance. Birds will likely flush a little bit farther than they did on opening day, so a tighter pattern is helpful. There’s no need to get radical yet, though. Save the IM and full chokes for the late-season.

Likewise, increase your shotshell’s payload as the season progresses. If you were using a 1-⅛-ounce 12-gauge load initially, switch to a high-brass 1-¼-ounce load. If you were using a 1-¼- ounce load, move up to a 1-⅜ or a 1-½-ounce “baby magnum” load. Use a full ounce in a 20-gauge, or step up to a 3-inch shell. By increasing payload, you can continue using that more open choke if you want, since the increased pellet count of the heavier load will fill in patterns at medium, midseason yardages. That way you’re covered for shots at both close and moderate distances.

Pack light to maximize mobility. Pheasant hunting isn’t usually a high-volume shooting affair, so you shouldn’t need more than, say, a dozen shells (unless you run into quail, but that’s another story). Wear a lightweight strap vest rather than a bulky full vest. It’ll be both cooler and provide more freedom of movement. Boots should also be light yet tough, like my current pair of Danner Sharptails, and uninsulated so your feet don’t overheat on those warm, midseason hikes.

A lightweight shotgun is especially important because you’ll be carrying that gun a lot more than you’ll be shooting it. The ideal weight for a gun is around 6-½ pounds for a 12-gauge, 5-½ pounds for a 20-gauge. You may want to downsize even further to a 28-gauge, since both gun and ammo will be lighter. That means you can pack more shells, but be sure to use the heaviest 28-gauge load you can find.

Whatever you do, don’t scrimp on the water, because your dog will still need frequent water breaks at this time of year, unless there’s a skiff of snow on the ground or a convenient pond or stream nearby. Pack enough water for both you and the dog, but remember, the dog drinks first. A dog trained to drink out of a squeeze bottle negates the need for a collapsible bowl, further lightening your load.

5. Get Away from the Road

Packing light will allow you to walk further, hunt longer, and explore the back-end of properties where mature roosters often like to hide out. Everyone, myself included, prefers to hunt near the truck or close to the parking lot, but more often than not, you’ll need to do some serious walking to find pheasants, especially on public land. If a patch of cover is difficult for you to reach, it was probably too difficult for other hunters to reach as well. That’s where you need to go. You’ll kill more roosters on the far side of almost any given property than you will within sight of the truck. As an added bonus, you’ll get in some cardio work to help wear off all that holiday feasting.

Most importantly, be quiet. Of course, don’t slam truck doors or shotgun actions shut, but especially, don’t talk. The number one thing that alerts pheasants to your presence is your mouth. Don’t converse with your hunting partner, or better yet, go alone. Don’t yell at your dog, unless it’s in imminent danger. Instead, use hand signals or the tone button on his e-collar to give him directions or corrections. Instead of blowing a loud coach’s whistle, softly whistle with your mouth. Even your brush pants or chaps can make noise as you bust through tall grass or cattails, so be mindful of what you wear. A slight breeze can help mask some noises, but as a rule, don’t talk, yell, or make any other unnecessary sounds. If you do, you’ll likely be following running roosters that flush wild most of the day.

Like any type of hunting, midseason pheasant hunting success can’t be achieved unless you just get out there and do it. You’ll never get anything sitting at home. Less dedicated hunters will be tempted to quit after their initial opening weekend attempt, especially if they’re unsuccessful. However, the birds are still out there for those willing to put in the time and effort it takes to find them. But don’t dawdle. The midseason quickly turns into the late-season with its short days, wary birds, and nasty weather. midseason success hinges not only on persistence, but also promptness.