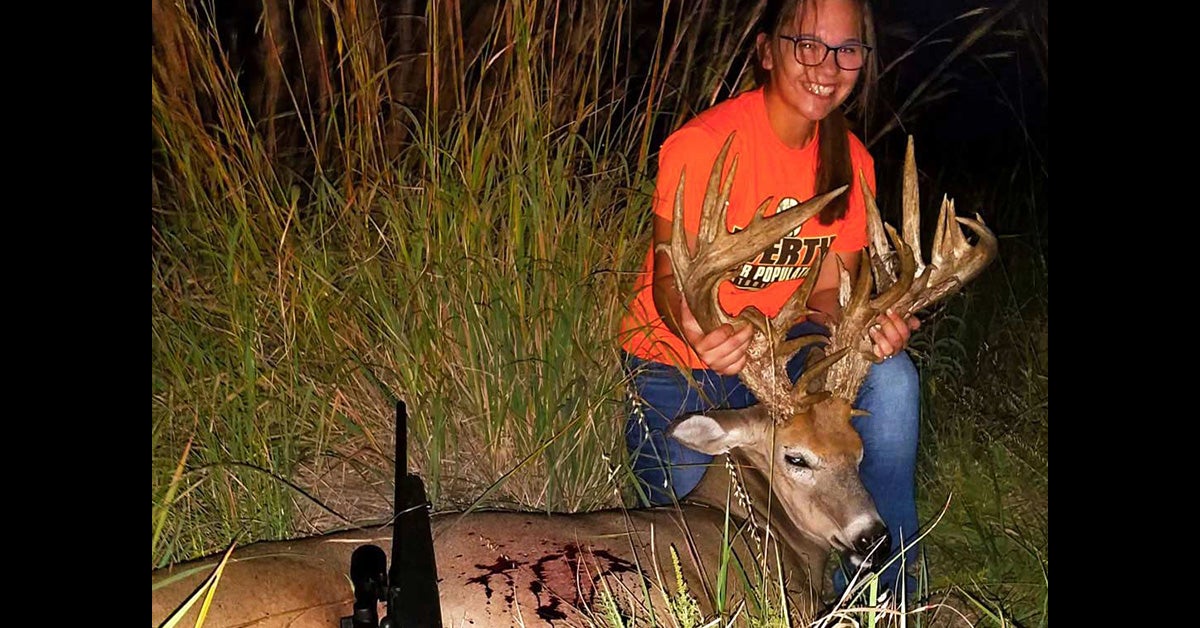 Paslie Werth wasn’t out to set any records when she pulled the trigger on a huge non-typical whitetail buck in September of 2020. She was simply enjoying a youth-season deer hunt on a farm owned by her grandparents, and continuing a hunting tradition established by her parents and siblings. But after the mandatory 60-day drying period, her Kansas buck officially measured 271-4/8, making it the Boone and Crockett record book’s highest-scoring non-typical whitetail deer ever killed by a female hunter. Here’s the story of her incredible world-record buck.

The Werths Focus on Big Bucks

Paslie, a high-school freshman who participates in tennis, track, and 4-H activities at school, sees deer hunting as a natural extension of a family life that embraces all things wild. “We love spending time outdoors as a family,” she says. “We hunt everything—turkeys, pheasants, quail, doves, and more. Getting a nice deer is great, but mostly I love just seeing what wildlife is active that day. It’s beautiful out there, and we never know what we’re going to see.”

While the Werth kids are allowed to shoot a smaller buck for their first one, they pass on all 3½-year-old bucks after that. “We’re pretty committed to letting them get mature,” says Paslie’s dad, Kurt. “We’ve had some pretty good success in taking some great bucks on the property.” All the Werth kids, son Konner, older daughter Jaeden, and Paslie, have scored on trophy whitetails. Last year, Paslie tagged a 178-inch 12-pointer. While that would be a career buck for almost anyone, Paslie was just getting started.

In 2017, Kurt started getting trail-cam pics of something unusual on the property—a buck with some nontypical antler growth. “We’ve taken some nice bucks, but they’ve all had a pretty typical frame,” he says. “This buck was a 5X6, and he had flat, forked brows. I figured he was in the 150s as a 3½-year-old. I told the kids, that this was a buck we needed to keep an eye on.’”

The next year the buck made a big leap in antler growth. “He jumped to a 7X7 as a 4½-year-old, and I figured he was high 170s or 180” Kurt says. “Jaeden was hunting that fall and had an encounter with him. We’d agreed that the buck needed at least one more year, so she held off on the shot, but I think she was pretty tempted. He was a great buck!”

The buck was a no-doubt shooter the fall of 2019, according to Kurt. “He had a 6X6 main frame, but about 27 total scorable points,” he recalls. “I put him in the 225 to 230 range. None of the kids saw him that fall, but I had an encounter with him when I had a crossbow in my hands. It was pretty tempting, but it was later in the season and he’d broken off a brow tine, plus a couple of other tines, including a nice drop. I decided to gamble on him making it through and seeing what he’d be like the next year. So I passed the shot.”

Just before the 2020 youth season, the Werths got a pic of the buck that made any thoughts of passing him ridiculous. “He’d just exploded and put on a ton of mass,” Kurt says. “I told Paslie that we were going to camp out on that buck until we killed him. In truth, there was no way that was happening, as her mom wouldn’t let her miss school. But since she was the only one of the kids young enough for the youth hunt, I was really hoping she’d get a chance. I thought it was our best shot.”

Opening morning of the youth hunt found the father-daughter team in a blind set in a big CRP field where they’d captured the buck on camera (pictured above). “There’s one cedar tree about 25 yards from the blind, which we’ve used as a range-marker over the years,” Kurt says. “It looks like a sea of grass, but there are several well-used trails that meet right in front of that blind. We didn’t see a deer that morning, and since the wind was picking up and it was getting warm, we went back to the house.”

Early September can be very in Kansas, and that afternoon was brutal. “It was 102 degrees, and the wind was blowing 25 to 30 mph,” Kurt recalls. “I was thinking that it wouldn’t even pay to go out. But Paslie was having none of that. She was tugging on my sleeve at 2 p.m., telling me it was time to go.”

While the pair predictably didn’t see much that afternoon, Paslie remained vigilant. “I seriously just had this feeling,” she says. “As the sun was starting to set I said to Dad, ‘How much longer do I have?’ And he said, ‘about 30 minutes.’ I normally lean my rifle against the blind, but I put it in my lap and took the sling off. I didn’t want it to make any noise if I had a deer really close.”

With the clock ticking on quitting time, Paslie looked toward the lone cedar tree in front of the blind and, to her amazement, watched as the giant buck rose from its bed. “He had to have come in there after the morning hunt to bed down and get out of the heat,” Kurt says. “And the wind was the only thing that kept him from hearing us as we came back for the afternoon. I mean, we weren’t trying to be quiet. One minute I was thinking about getting everything ready to go, and the next Paslie was telling me there was a big buck, and shushing me to be quiet.”

Paslie, a well-trained marksman through her 4-H activities and previous hunting experience, made the 30-yard chip-shot easily. “He got up from his bed and stretched, then walked a few steps and looked right at the blind,” she says. “As soon as he turned his head, I got the rifle up, put the crosshairs on him, and made the shot. I was sure I saw him go down, but dad hadn’t. He told me to get out of the blind and walk toward where I’d last seen the buck. I stepped out and took a few steps and could see the buck’s white belly in the grass. Dad was still talking to me, and I turned and shushed him for the second time that day. There was no way I was walking up on that buck by myself!”

Paslie and her dad were awed by the buck lying in front of them. “The cam-pics didn’t do justice to his mass,” Kurt says. “He was even bigger than I thought he’d be.”

“I couldn’t even get my hands around the bases, and when I tried to turn his neck to look at his rack, I couldn’t,” says Paslie. “I got on my phone and the first call I made was to my sister Jaeden. She said, ‘Did you just shoot my buck?’ And I told her I did. She was so happy for me!” Word of the monster buck spread quickly, and in the initial green scoring session, Paslie’s buck grossed 282-6/8. After the 60-day drying period, the huge buck was given an official net score of 271-4/8, making it the highest-scoring buck ever recorded in the B&C book by a female hunter. B&C doesn’t have a separate category for women, of course, but that won’t keep us from calling Paslie’s incredible buck a new (if unofficial) world record.

Paslie harbors few illusions about shooting a bigger one. “When we’re in our first season, we can shoot a 120-inch buck. Now I’ve shot a 271, so I think there are a whole bunch of bucks in between that I can take and enjoy!”