Ryan Beran watched this 200-plus-inch nontypical buck grow up on his property in Northeast Ohio and was finally able to tag the monster deer this fall. 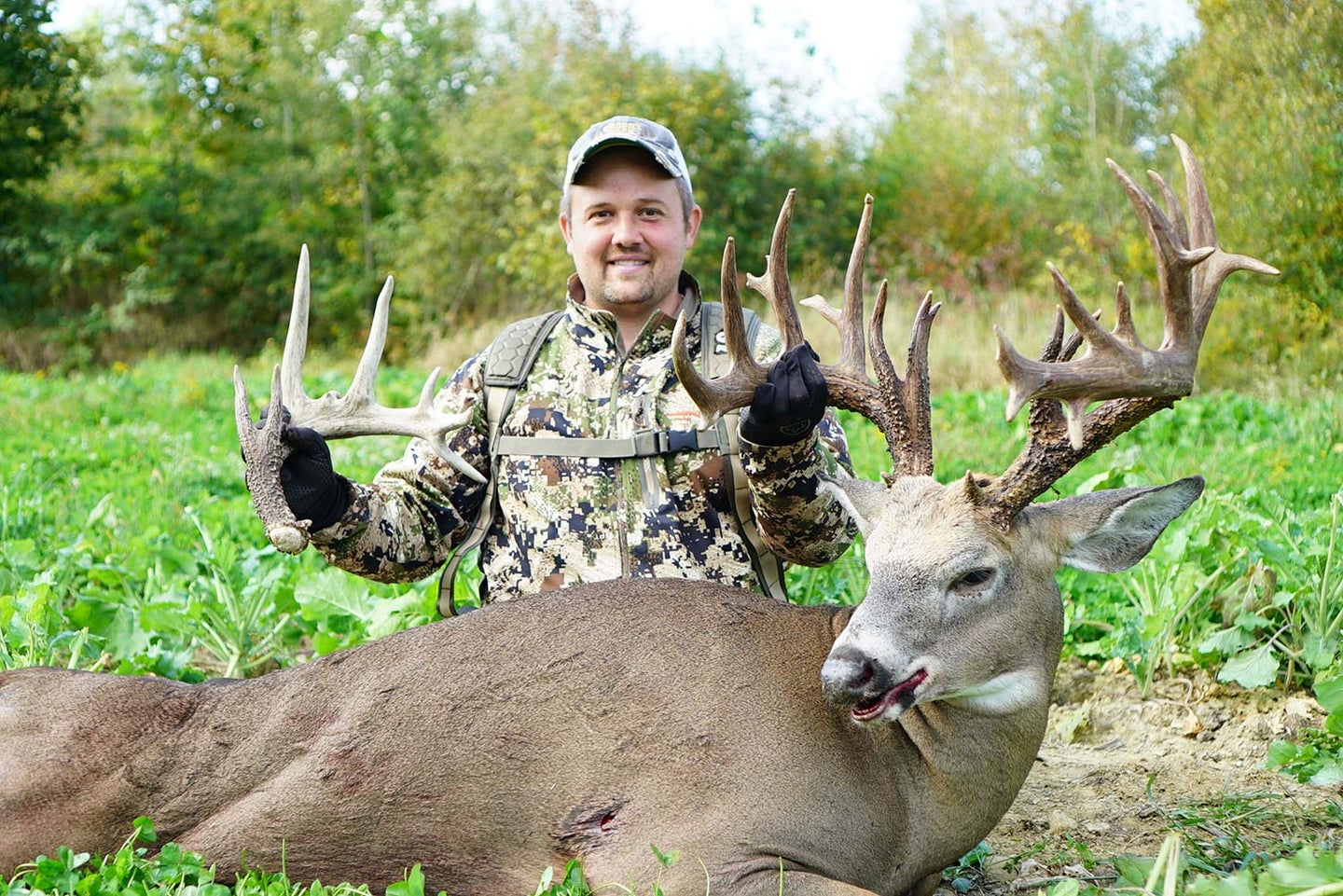 Ryan Beran poses with his huge Ohio nontypical and one of the bucks shed antlers from the year before. Ryan Beran
SHARE

While Ohio is a well-known producer of whopper nontypicals, Ashtabula County, located in the Buckeye State’s northeast corner, is not responsible for that reputation. Lying hard against Lake Erie, the county is smack in the middle of the snowbelt, where severe winters, small blocks of timber, and intense hunting pressure make it tough for bucks to live long enough to grow monstrous antlers. But Ryan Beran and his family work hard to create and maintain habitat and keep deer happy on their properties. That vigilance paid off for Beran last September, when he killed a huge 4½-year-old buck that he’d watched grow up.

Beran first encountered the buck when it was 2½ years old. “I could tell he had the potential to be a great deer even then,” he says. “He had 13 points, with a split brow tine and a kicker. I found his sheds the next spring, and he scored 123, which is pretty amazing for a 2-year-old around here.”

While his second rack was impressive enough, the buck was just getting started. “The next summer I started getting pics of him almost immediately on my mineral licks,” Beran says. “He was also a regular on my clover plots, which are between thick bedding cover and destination food plots farther out. The buck was growing all summer, and when the archery season opened, he had 18 points and a drop tine. I figured he would be right around 170, and that would be the biggest buck I’d ever killed. But I just kept thinking about the jump he’d made from the year before and wondered if he could do that again. If so, I’d be looking at something special. So when he walked out on the food plot and fed to within 10 yards, I didn’t even draw my bow. I knew I had to let him go.”

The next spring, Beran found one shed from the monster buck, so he knew the possibility of a chance at a true Ohio giant was very real. “When we bought this property, it had been logged not long before, so the cover was very good,” he says. “We do our best to keep that habitat as good as we can, by adding ponds and food plots. We tend to attract some of the best bucks in the area because of that, and I hoped that this deer would continue to feel safe and stay here.”

Beran’s hopes were realized when the buck started showing up on his favorite mineral sites. “In early summer, I could already tell he was going to be an amazing buck,” he says. “But I was not prepared for the jumps in growth I’d see as the summer progressed. His rack seemed to blow up every week.”

With the archery season approaching, Beran felt that the buck would be vulnerable at a Whitetail Institute clover plot. “It was an hourglass-shaped plot where, if I waited for the right wind, I knew I’d have a good chance if he showed up to feed.” Beran also opted to use a crossbow, legal during Ohio’s archery season. “I almost always use a vertical bow, but I knew if I got a chance at this buck, I wanted every advantage,” he says. “I have a TenPoint Vengeance, so decided I’d use that.”

As it turned out, Beran could have probably used a sharp stick to kill the giant buck he’d passed the year before. Opening weekend was warm, but with a good wind in his favor, Beran headed to the stand. The buck emerged from the bedding cover and into the food plot, where the favorable wind felt safe for the deer, but gave a slight but critical edge for the hunter. “He fed within easy bow range, and I made a perfect double-lung shot,” he says.

The buck tore off into the dense timber, and Beran was certain he heard the deer crash. “Still, I gave it a couple of hours before looking for him,” he says. “I wanted people close to me to be with me when I found him. I called my wife, my parents, and a couple of friends who joined me on the blood trail, which was pretty easy to follow. I honestly didn’t think he was a 200-inch buck until we walked up on him. When I got to put my hands on him, I was pretty sure he was breaking that barrier with some room to spare.”

Beran’s Ohio giant ended up netting 227 inches, and the buck had broken off one of its drop tines on its death run. “We looked for days but never did find that tine,” Beran laughs. “If that had stayed with him he might have gone over 230. But I obviously don’t care. Bucks like that are a rarity in this area. I was lucky enough to be able to watch one grow up on our property and have a chance to tag him in his prime. Hopefully he bred enough does during his life that another one like him might show up some day.”