How to plan a deer drive, teach a kid to cuss, and hunt the camp critter 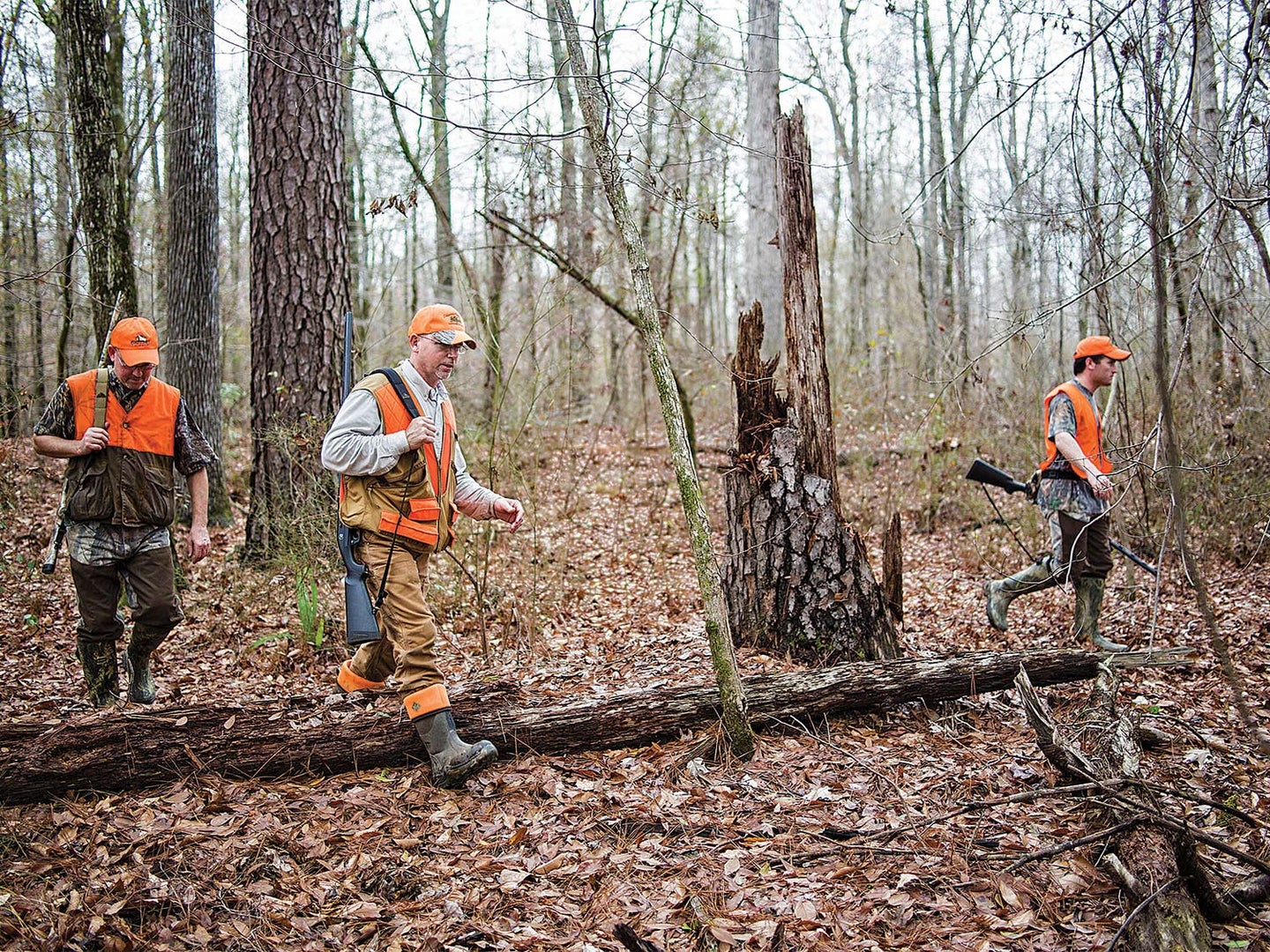 A good old drive is a great way to spend time with family and friends at camp. Peter Bohler/Redux
SHARE

You can learn a lot at deer camp. How to hang a treestand and field-dress a deer, sure. But camp is also the perfect setting to teach invaluable skills, such as driving a stick shift, executing a family deer drive, and cussing. That’s right, cussing. Here is a collection of some of our favorite tips and life lessons that we’ve learned at hunting camp.

How to Beat Target Panic with Fruit

There’s a lot of target panic born at camp. You miss a buck in the evening and, convinced your bow is screwed up, charge back into camp to shoot by the glow of truck headlights. Then you really do screw up your bow by messing with the sight. You miss another buck the next morning and vow to give up bowhunting forever.

But camp is also a good place to beat target panic, because it’s the best of all places to clear your mind and realize that the condition is caused above all else by an erosion of confidence. Using a back-tension release, blind-bale shooting, hiring a coach, and all the other usual advice is helpful—but chances are good you didn’t bring back-tension releases, bales of hay, or an archery coach with you to camp.

Skewer it on the nock of an old arrow, and stick it into the ground in front of a bag target. Don’t worry about your groups on the target—or really much of anything else—besides William Tell-ing that piece of fruit. If you really need to get into the technicalities of it, this shooting exercise forces your brain to pick a spot in a way that a spot on a target bag does not. That mist of apple juice following a good hit is positive reinforcement too. Put another way, shooting apples is so much fun that you’ll want to give grapes a try next. And if you can hit a grape, a deer’s lungs will seem easy. —W.B.

How to Hunt the Camp Critter

For two days during the filming of a South Florida turkey hunt, senior editor Natalie Krebs and I had been scaring off Osceola gobblers as if our careers depended on it. At noon on the third day, we were eating lunch at camp in silence, a putt and a wing tuck away from lashing out at each other. Krebs suddenly said, “There are three longbeards walking through the damn yard.”

I grabbed a reaper decoy and my shotgun, and Krebs grabbed her camera. We sneaked around back, ­belly-crawled behind the propane tank, and popped the fan up maybe 30 yards from the turkeys. The toms charged across that manicured Bermuda in a mess of gobbling, and all I had to do to kill the biggest one was wait for it to clear the landowner’s truck and for Krebs to say she had his ugly head in focus.

In most remote hunting camps, it’s perfectly legal to fill your tag in the front yard, but we hesitate, as if waiting for the critter to cross the driveway before shooting it is the morally superior thing to do. Evalu­ate your scruples ahead of time so you don’t screw it up when a longbeard or a big buck strolls past the patio. Ultimately, the decision to shoot or not is yours—but if you’re waiting on my permission, consider this your blessing. —Will Brantley

As the first audible whoops and whistles neared, I heard one of my uncles yell, “Buck up!” and four does bombed out of the spruces. I could hear another deer moving slower, barely ahead of the drivers. I’d just turned 19. My eagerness to bull through cover and hop bogs made me the perfect candidate for pushing brush, but that day I was assigned posting duty on the Spruce Swamp Drive. In a rare command decision, one of the elders told me to stand guard on a small open knoll overlooking the swamp—a prime outlet for escaping bucks.

The does bounded through the marsh grasses ringing the swamp and then turned on the burners as they hit the ag fields behind me. I heard the slow-moving deer stop, caught between the scent of the posters ahead and the sound of the drivers moving in from behind. I sat on my stump, shaking like a leaf, shotgun up—suspended in that frame just before something is about to happen.

When I started chasing whitetails in 1972, deer hunting was driving. We would spend the first few hours of the day parked on a stump or a rock, hoping a buck would show. But that was mostly a restless precursor for the Big Show—a series of drives, any one of which would produce more deer sightings than a year of stump sitting.

Waupaca County, Wisconsin, was awash with deer in the 1970s, and as a kid I ate up every element of driving—the men signaling to one another, the crackling of brush as deer wheeled, the bark of the shotguns, and the anticipation that followed. Even the planning was exciting. We’d gather in a circle, and one of the men would draw a map in the dust of a pickup hood. The Xs were the drivers, who would follow the squiggly lines toward the posting Os. But who would be an X and who an O? That was always a thorny problem for my painfully polite Norwegian relatives, none of whom wanted to take charge.

“Well, doncha think a guy should sit by that ditch crossing where they like to squirt out early?” one uncle would say.

“Oh sure. Who should sit there then?”

“Well, I’m not gonna tell anyone what to do…” Sometimes our planning sessions took longer than the drives. But, boy, did we move deer.

Over time, though, driving fell out of favor. Some of our older members, those who loved driving the most, quit hunting. Others wanted to manage for older bucks. One year we decided to cut the driving in half. Then we focused on small pushes, and finally, without fanfare or pronouncement, we just quit. But we lost something in the process.

When that buck finally exploded from the Spruce Swamp, he kicked straight for my knoll and was so close as I pulled the trigger that my shot tipped him backward. I walked over and knelt down next to the deer. After a while, I unsheathed my knife, but before I could stand, I felt a hand on my shoulder, then another, and another—an uncle, a cousin, my dad—all gathered around to congratulate me and to recount their part in it. I’ve killed a lot of bucks by myself since we quit driving, and I’m proud of all of them. But if a cousin were to show up and draw a map in the dust of my pickup’s hood, I’d be as eager as ever. —Scott Bestul

Camps are notoriously overrepresented by skilled outdoorsmen, so there’s really no need for you to show off. Which is sort of a skill in itself. You’ll be tempted to aid in the fire-building at camp, for example. Don’t. ­Every man alive is an expert fire builder, and there’s already too much kibitzing about it. It is important to look busy, however. I often find an elevated spot near camp from which to glass. You should try it. If challenged, say that you’re looking for caribou. If told that there are no caribou in the continental U.S., say, “That’s exactly what they want you to believe.” Most important, do not throw an ax at a tree. Ever. If you miss, you’ll never see the ax again. If you hit the tree, the ax will bounce back, split the forehead of your host’s youngest child, and you will not be invited back. Don’t ask me how I know this. —Bill Heavey

Teach a Kid Lessons That Will Last a Lifetime

When i was 12 years old, I popped the clutch on an ’85 model Toyota 4-Runner, lurched the thing right into a 10-inch hickory tree, and said, “Well, shit.”

My dad, having already braced himself for impact in the passenger’s seat, just nodded. It was midday at deer camp, and we needed to kill some time before getting into the stand that evening. So he was teaching me to drive—and cuss. “Put it in neutral and start her up again,” he said.

Hunting camp is the perfect place to teach a kid life’s important skills because at midday, what the hell else are you going to do? Knowing how to drive a stick shift and curse properly have both gotten me further than algebra or poetry critiques ever did. Just a few Octobers ago, some buddies and I rented out a North Dakota farmer’s basement as home base for a week of freelance duck hunting. By “rent,” I mean we brought the farmer whiskey, of which we only drank a little ourselves. One midmorning, when I saw the farmer striking out of his driveway on foot, headed toward his tractor parked in a field a half mile away, I offered to help. “Why don’t I run you over there in your truck?” I asked.

“Because it’s a straight shift, and I doubt you know how to drive it,” he said. “My experience is, people your age are dumb­asses.”

I joined him for a moment of griping about the damn millennials, then he handed me his keys and climbed into the passenger’s side. I revved the truck more than needed to get it moving—I was rusty—but I covered that up with a good “m———-r” and a seamless glide into second gear. I stopped the truck, idling in neutral, alongside his tractor and said, “Meet you at the house?” He smiled, shook my hand, and thanked me. I drove back, grateful for my education. —W.B.