Want to find your spring gobbler? Try looking in these rarely-hunted areas 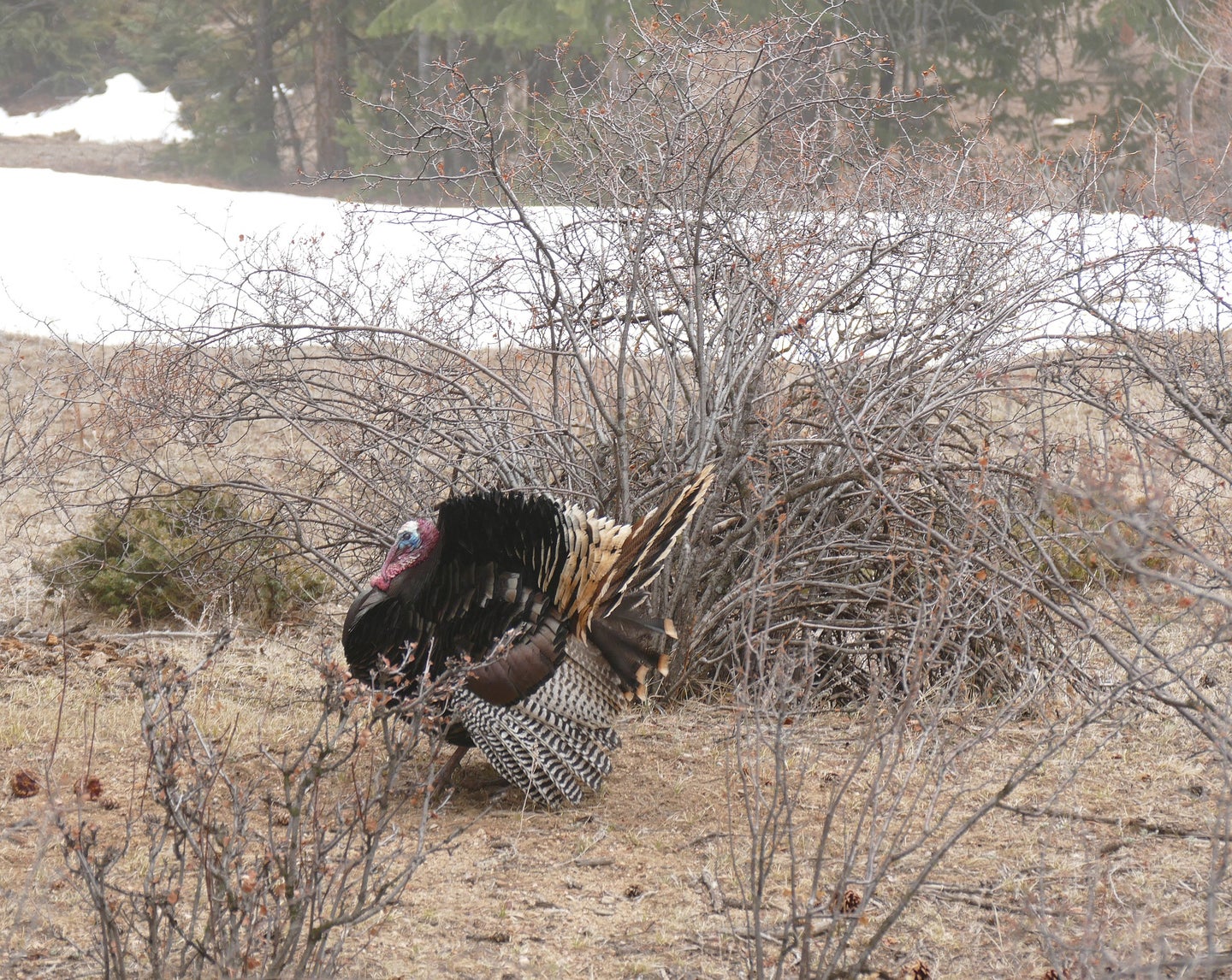 The western U.S. is home to a lot of turkeys, but few turkey hunters. Suzanne deDisse from Pixabay
SHARE

At first glance, this title might seem impossible. Interest in spring turkey hunting has exploded, spreading far and wide. It’s hard to imagine gobbling toms being neglected anywhere, except perhaps those living on private land behind a padlocked gate plastered with “No Trespassing” signs.

But dig deeper into our country’s hunting opportunities, and you’ll find there are actually plenty of situations where you can find overlooked birds that seldom hear a hunter’s call. You’ll find them on public land, and also on private property where turkey hunting is typically allowed for free or a small fee. Some of these birds may be difficult to access, others may live in what seems like a totally inappropriate habitat, still others may live in areas where spring turkey-hunting mania simply hasn’t caught on.

Whatever the reason, there are neglected spring turkey hunting opportunities available across the country. If the woods you hunt has gotten a bit too crowded, and you’re longing for a more relaxed hunt with un-pressured toms to call to, check out these opportunities.

Some of my most memorable turkey hunts haven’t been in areas where you drive to a likely spot, park the truck, walk out, and start calling. Instead they’ve involved floating downriver to find areas that are hard-to-reach by road. Opportunities like this can be found throughout the country.

You can use a johnboat, canoe, or inflatable raft and do this hunt in a single day if you choose. Launch at dawn for a float down a carefully-selected stretch of river, and leave a vehicle waiting at the take-out spot. Slip silently downstream until you hear a gobbler. Then scope out the terrain, select the best spot to call from, quietly beach the boat, and set up. This is also a great hunt for two people, since you might not be familiar with the exact topography and can cover two likely directions the bird might head towards.

Float hunting is especially productive late in the season when birds gobble later in the morning and in areas that allow afternoon hunting. Research the trip with GPS, satellite photos, topographic maps, and maps that delineate prime habitat and private/public land demarcations before heading out.

The second and best way to hunt these birds is to plan on spending one or two nights on the river’s edge and bringing a tent, cooking gear, and food. This will let you cover more territory, roost birds in the evening, and be ready to go at daybreak. Don’t forget to bring tackle so you can make it a hunting-fishing combo adventure.

2. Look for Turkeys on Lakesides

Another approach for finding lightly-pressured birds is to scope out either lease opportunities or public land surrounding lakes. Gathright Wildlife Management Area in west-central Virginia is a prime example. When the Jackson River was dammed, thousands of acres of land surrounding the newly-formed Lake Moomaw were opened to the public for hunting. The lake offers great fishing for trout and smallmouth, but many acres of the steep, rugged mountains around it don’t offer easy access. The turkeys that live there are hunted by only a few intrepid souls who paddle or motor to inaccessible areas and hike up the steep slopes.

While fishing for brown trout in that lake a few years back I couldn’t believe the number of gobblers sounding off from nearly every spur ridge. A week later when the season opened, I did something about it—and came home with a heavy tom for the morning’s effort. Situations like this are present throughout the country, offering seldom-hunted birds that no one else wants to bother with.

Read Next: Where and How to Hunt Public-Land Turkeys

Florida hunters are accustomed to trudging through mucky swamps to kill challenging Osceola turkeys. But across most of the country, birds that live in mixed habitat of knee-deep marsh tend to get neglected. It’s a lot easier to focus on woods and field birds that don’t require hip waders. But even in swamps there are dry patches of land where turkeys can roost and strut with little hunting pressure. Topographic maps and satellite photos will help you find these spots. Access them before first light and wait for a tom to sound off. Just don’t forget to bring hip boots, or even chest waders, depending on the depth of the water.

4. Check Near Ranches and Farmhouses for Toms

Often in middle-America and in the West, where turkeys aren’t hunted as obsessively as they are in the East, toms mill around farm houses, barns, and sheds on private property. They seem to like being around structure, just like bass and deer. There needs to be a tree line or woods nearby, of course. Turkeys won’t wander up to a treeless farm in the middle of a 30-acre field.

Be careful, though, when hunting these spots. Consider why the birds are there. If they’re coming in to feed on a pile of leftover grain fed to livestock, a baiting citation could put a damper on your hunt. If they just like hanging around the farmhouse and pecking at a bug here and a stray grain kernel there, you should be okay.

Read Next: What I Learned from 22 Straight Days of Turkey Hunting

More and more hunters are pursuing gobblers in western states. National Forests and state lands with trees get lots of attention. But areas with broad canyons in rimrock and badland country seldom get pressured by hunters. Not all of these kinds of places hold turkeys. But when they do, they offer a unique spring gobbler hunting experience.

When I hunted southeastern Colorado in this type of terrain, my first trip was for trophy mule deer. During our hunt, my guide Bill Ferranti surprised me by saying there were turkeys there. The habitat looked like pure desolate badlands good for nothing but rattlesnakes, coyotes, and mule deer. You could count the number of trees in a three-mile canyon on two hands. But he insisted turkeys lived there and invited me back to hunt them, so I did.

The first morning, a flock of nine birds trooped up the canyon bottom answering my calls as I sat not in front of a tree, but a rock. I killed the biggest.

There are precious few trees in these canyon-type habitats. But the truth is, turkeys really only need a couple of scraggly ones to roost in. Pines, cottonwoods or scrub oaks will do. Game biologists in western states can help you find some of these overlooked spots. I hunted one such place in southeast Wyoming where the rancher couldn’t remember when he last had a turkey hunter. He charged 20 bucks for one tom. During deer season, access to a ranch like his could go for ten to 50 times that for a hunt.

6. Hunt Turkeys on the Edges of Suburbs

Many people know of the deer hunting opportunities in suburbs and near the edges of towns, but few know there are occasionally opportunities to hunt gobblers as well. Small town newspapers and news websites regularly run photos and videos of mail carriers in the burbs being confronted by angry, bossy toms. Like the canyon birds, these turkeys are usually not hard to call in, but you might be hunting with a bow rather than a gun in the most urban locales.

Check with the regional game biologist about areas in or outside of towns and smaller cities to see where a gobbler hunt might be possible. Zoning may switch from town to agricultural right at the edge of someone’s backyard, opening up a hunt in an area few would think of.

Read the regulations carefully and be sure you know where the various property lines are. Chances are you won’t actually be hunting in someone’s yard, but rather close to the nearest roosting area on a state or county parcel, or on a friendly farmer’s land who lives just outside of town.

Texans are crazy about whitetails. But in a lot of areas of the state that I’ve hunted, particularly south Texas, they aren’t too turned on by turkeys. Sure, the Hill Country and East Texas get pressure, but a lot of intensively managed deer properties in south and west Texas have trouble getting non-residents to come down for toms, even though they can often kill two or three birds on a trip.

Hunt a ranch in these areas, and you’ll likely find abundant birds that aren’t call-educated at all. My first morning on one such hunt yielded a pair of toms with 11- and 12-inch beards. By lunchtime, I was hunting with a camera. Just wear some cactus protection, including knee pads, and plan on taking home some pork while you’re at it. Feral hogs, including a former world record, are ubiquitous. Exotics offer other possibilities for a combo hunt.

Some farm and ranch country in Montana, South Dakota, Wyoming, and other western states also have burgeoning populations of birds that few people ever bother to hunt. Sure, a few out-of-state hunters hit the big chunks of timber in National Forests, but few take advantage of the neglected prairie country toms found in more isolated pockets of public land.

Read Next: I Love Hunting in Texas. Why Don’t You?

8. Hunt Turkeys in Remote Wilderness Areas or Areas with Low Populations of Birds

Deer hunters rarely venture more than a few hundred yards from parking areas. The same applies to most turkey hunters. If they don’t hear a gobbler from the road, they either give the area a cursory try or move on. Plan on starting where they pull out—a half-mile or more from vehicle access. You’ll be stunned by how many birds you find off the beaten track. Leg power is my usual approach, but you can use horses and bikes as well. The best way to make this trip is to plan on staying several nights, and bringing a tent, sleeping bag, food, and fishing tackle if there are any streams creeks nearby that might hold a few brookies or brown trout.

Game departments make turkey harvests available every year online. Instead of looking for counties with the most kills, go for the ones with very low harvests. Odds are good those areas won’t see the pressure high-density turkey habitats do.