The Shooter’s Guide to First-Focal-Plane Scopes 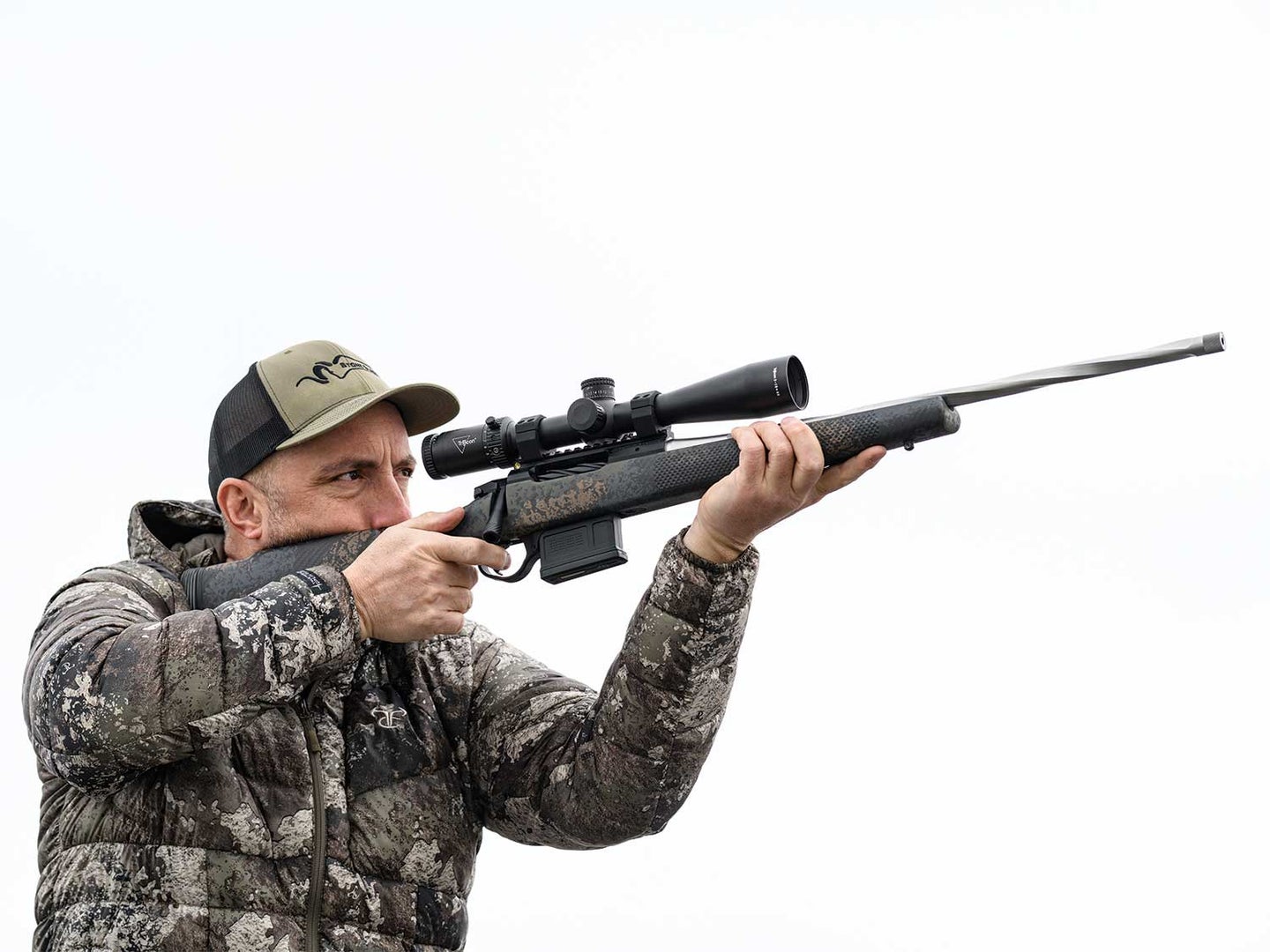 For the longest time, American hunters wanted nothing to do with first-focal-plane scopes. They were a European thing—like monarchies, futball, and bidets—and as such were suspect and best avoided if at all possible. Long ago we developed a preference for simple duplex reticles in the second focal plane in scopes with magnification ranges of 3X–9X, or if we wanted to shoot longer distances, 4X–12X. Until about seven years ago, these scopes accounted for approximately 90 percent of the hunting market. But in order to take advantage of the improved accuracy of everyday rifles and ammunition, more hunters are putting FFP scopes on their deer guns.

The first time I mounted an FFP scope on a rifle was around two decades back. It was a Kahles 1X–6X with a thick duplex. When the magnification was cranked all the way up, that reticle filled the viewfinder. Referring to the reticle as “crosshairs” didn’t capture its essence. It was more like a pair of crossed 2x4s dominating the sight picture.

For someone not used to that, it was unsettling. The biggest gripe I’d hear from hunters was that the reticles were clunky and less precise at higher magnifications, which is exactly what you don’t want for distant targets.

That concern is understandable, but exaggerated. The human eye has an amazing ability to center crosshairs on a target, even when the crosshairs appear thicker. Consider Palma competitors who shoot open sights at distances out to 1,000 yards. Their sights obscure most (and sometimes all) of the target, but they are still able to center their sights well enough to hit their mark. The same applies to placing thick crosshairs on the vitals of a deer.

That Kahles was ideal for hunting dense cover and dangerous game. I used it on both a .35 Remington lever-action and a .416 Rigby, which accompanied me on several trips to Africa. I had no trouble shooting to 300 yards with the Rigby—and for targets up close, the scope was fast and deadly on both rifles.

At the other end of the spectrum are the FFP scopes used in precision-­rifle competitions. These often have 5X–25X or 7X–35X ranges and use reticles with fine hashmarks, numbers, and dots arranged in a grid or Christmas-tree pattern. When the magnification is dialed up, these reticles are easy to read, but at lower settings, they can appear faint, which makes them less useful for hunting. These scopes also tend to be expensive and heavy.

So far, this doesn’t read like much of an endorsement for FFP scopes for hunting—and there are plenty of traditionalists who scoff at the concept—but they do have their merits. The primary one is versatility. Because an FFP reticle doesn’t change size relative to what is being viewed, the shooter can use the reference marks at any power, unlike holdover reticles in SFP scopes, where the magnification needs to be placed at a specific setting, usually the highest level, in order for the hashmarks and holdovers to line up correctly.

The difference between these two can’t be overstated. A holdover reticle that’s useful at only one power makes as much sense as a Swiss Army knife with seven identical blades. And if that SFP scope’s magnification dial gets bumped in the heat of the moment, the bullet isn’t going to hit where you’re aiming. With an FFP reticle the scope’s setting doesn’t affect accuracy.

Aim for the Middle

The trick to producing FFP scopes that are well-suited to hunting is to mitigate their disadvantages—their bulk, cost, and issues with the reticle either being too clunky at max power or too indistinct at low power. A growing number of optics companies are doing just that.

I’ve been messing around with a couple of new models, including Trijicon’s Tenmile 3–18×44. As an all-around optic, for hunting and competition, it is difficult to beat a 3X–18X. The Tenmile has a number of useful features: The elevation knob has a ­return-to-zero function that’s easy to set. The windage knob is capped, so it won’t get bumped accidentally. And the reticle is laid out in a useful MOA grid. At low magnification, that grid becomes somewhat indistinct, but to make up for that, the scope has an illumination feature with variable levels of intensity that creates a bright crosshair in any light condition. The scope, which is built on a 30mm tube, weighs 24.4 ounces, which isn’t light but isn’t terribly heavy, either, for what it is.

Burris has also come out with a new hybrid hunting-target FFP scope. It is a 5–25×50 in the Signature HD line. The ballistic reticle is tuned to a 6.5 Creedmoor shooting a 140-grain ELD bullet. It has an illuminated reticle, push-pull locking turrets, and a zero stop on the elevation control. Zeroed at 100 yards, the reticle provides holdovers at distances from 200 to 700 yards in 50-yard increments. At $765, it is a good value.

Another solid FFP hunting scope is the Maven RS1 2.5–15×44. The reticle has a grid with MOA subtensions and bold duplex crosshairs that work great at all magnification levels. The scope comes with the option to convert the elevation knob, which is normally enclosed, into an exposed turret for dialing, but the turret spins too easily for my liking, so I prefer to keep the elevation adjustment capped and use the holdover marks in the reticle for longer shots.

SFP scopes aren’t going away any time soon, nor should they, but for hunters looking to maximize the potential of their accurate rifles, FFP models are an appealing choice. Unlike bidets, they’re bound to show up at more and more hunting camps going forward.